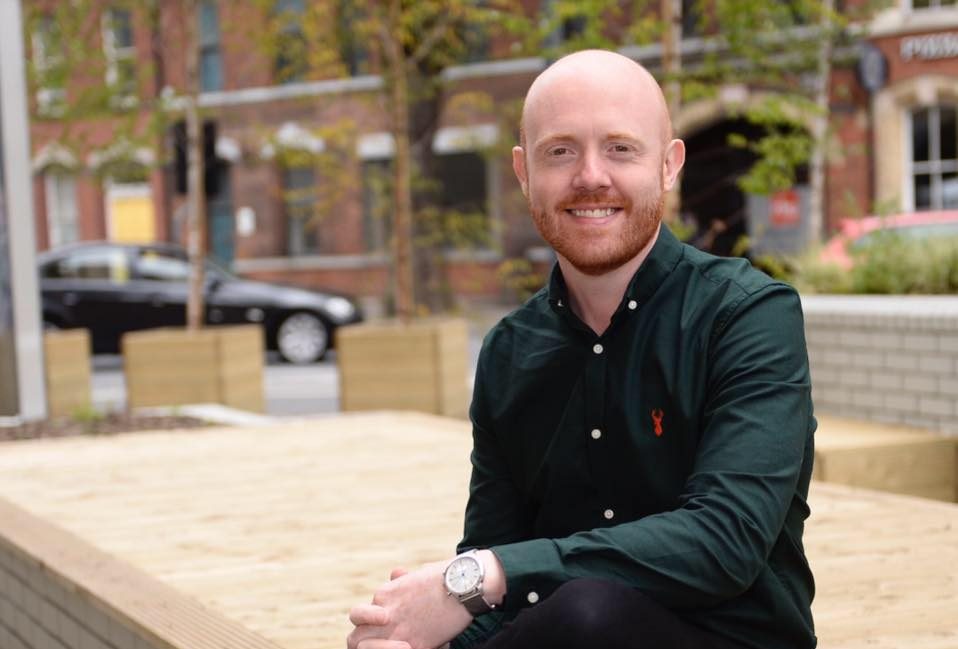 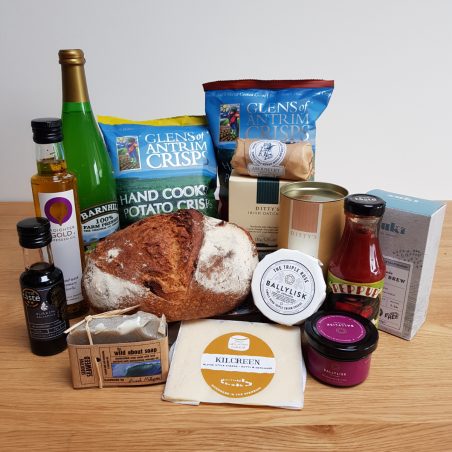 I recently met up with BBC Northern Ireland weather presenter Barra Best for a coffee and chat – topics covered included the best hiking spots around Belfast, the impact of social media, and which fellow TV personality he’d beat in a race to the top of Slieve Donard.

Here’s what Barra had to say…

So Barra, tell me a bit about yourself.

I was born and bred in Belfast. I still live there, originally in the West, but now I’ve moved over North which is quite good for getting outdoors, with Cavehill on your doorstep. Although I have to say I’m a bit biased – I prefer the walk around Divis Mountain because it’s flatter. I think you get good views. So, yeah, based in Belfast, have worked in the BBC for 13 years now – doing the weather close to 10 years. So you can imagine a lot of people are always getting in touch, asking: “I wanna go out walking this weekend – what’s the weather like?”, and when it does go wrong, they let you know. When it goes perfectly, they appreciate it, which is good! 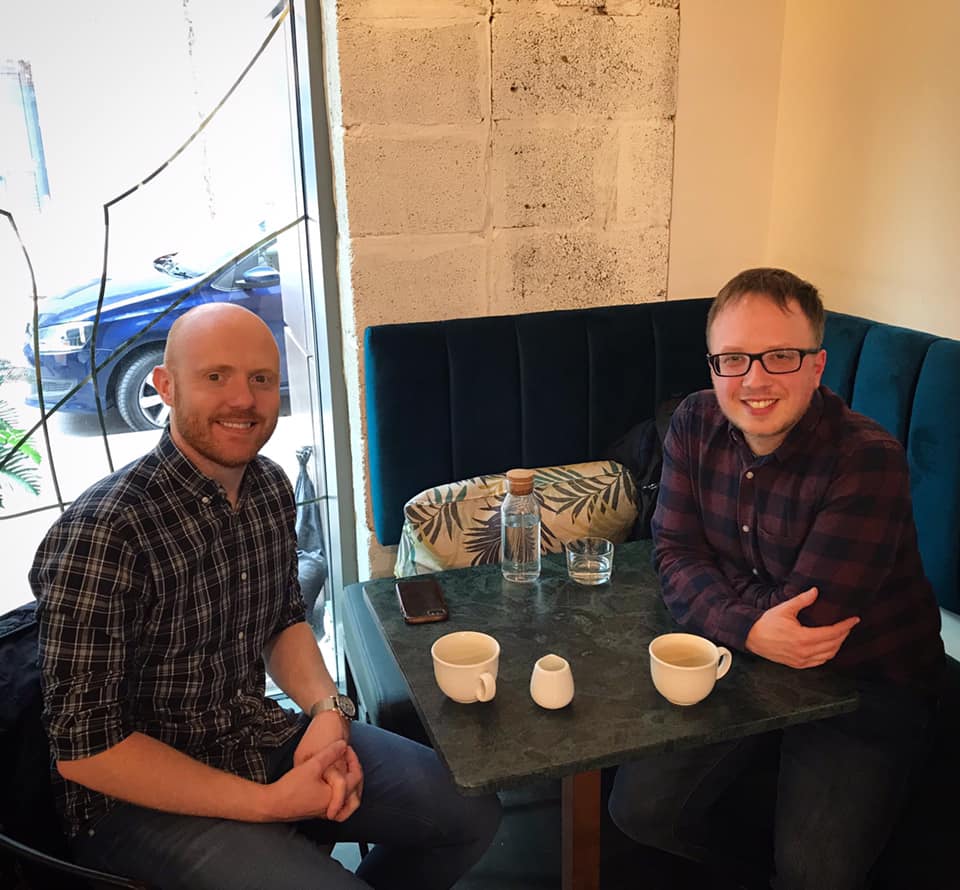 READ: From Donard to the Drakensberg (Part 1)

And how did you come to be involved in the BBC?

I was involved in a few community projects growing up in media, local radio stations and things like that. I was working in IT and a friend of mine told me she was going to do a master’s in journalism, and I thought: “I’d like to do something like that”. So, I went back and did a master’s in journalism and got the job within about 8 months at the BBC – 13 years ago in fact. The rest is history. I started off reporting, presenting the news – I did that for three years on radio and TV, and then got a chance to present the weather. It was only for nine months to cover maternity leave but that was just over nine years ago now, so I’m still doing it. I don’t really see it as a job, more of something I love doing every day.

What’s a typical day like for you in covering the weather, Barra?

It can be anything from 5am in the morning, or else from 10 o’clock. We do shift work, which doesn’t suit everybody. It kinda suits me – I’m happy enough with that. You are covering everything that’s live – weather, radio, television, updates on social media – that kinda thing. Then big events like snow or storms – you’re tracking those live as they’re happening – to keep people up to date about what to expect. So, it can be quite a fast-moving environment, and then of course you can be the bearer of good news or the bearer of bad news. It just depends on what way you want to angle it. Some people love heatwaves, other people hate them. So, it’s trying to strike that balance and keep everyone happy. If it’s too warm, I don’t enjoy it. Beach holidays are not for me. 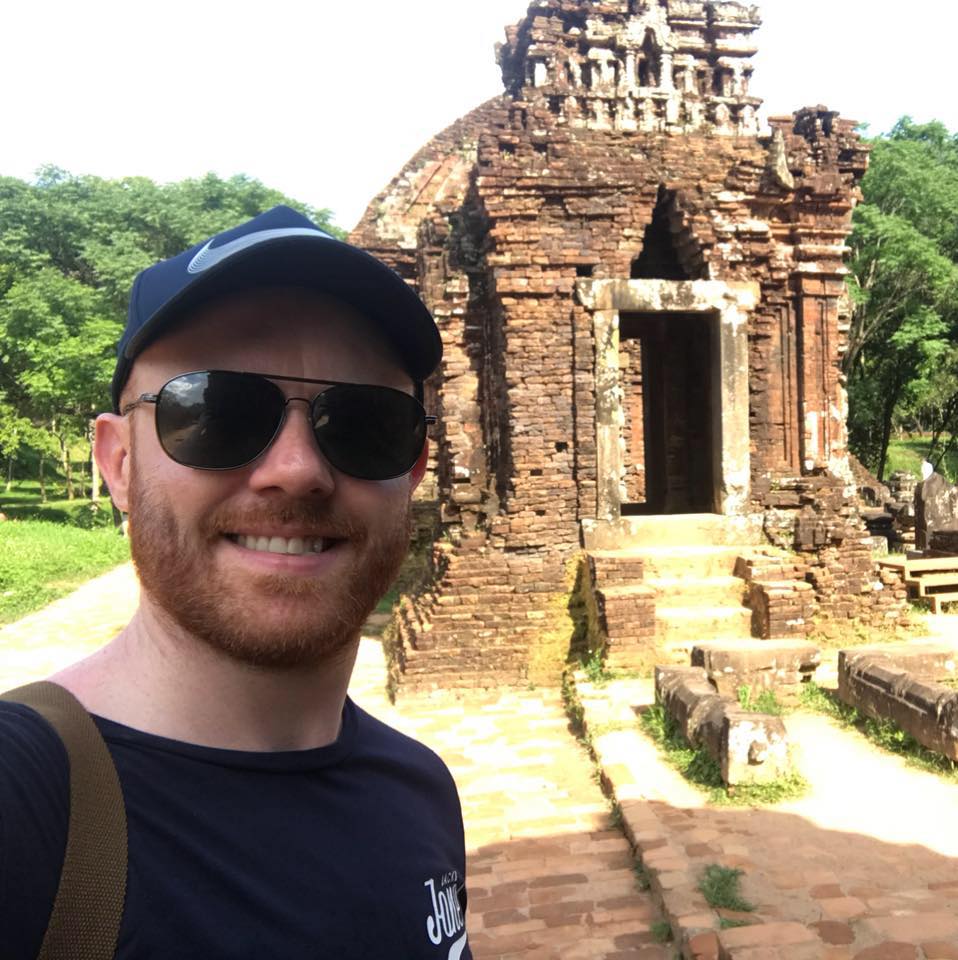 Yeah same here! So, you do shift work then…do you cover everything?

Essentially yeah, and that’s for the whole length of the shift. So, there may be a general focus on one or the other depending which one is live and which is pre-recorded, but mostly you do everything on your shift.

Has that changed a lot in the last 10 years, Barra?

I think it has – people are checking for updates on the weather. You do it on your phone. You know, I tweet or Facebook stuff out. I can tell, looking at things, how many people have viewed it. Sometimes you look at that and you go: “Whoa!”, knowing it’s probably someone just sitting on the bus home, or sitting on the train, or sitting in the office with some downtime, wondering what the weather is going to be like to get outdoors. So, things like social media have definitely helped it take off.

Definitely, I agree. Would you say weather is a passion of yours? Was it always that way?

Yes and no – I was like everyone else, I just wanted to know what the weather was like to go to work. Then I got the opportunity to do it, as I say. I wanted to get on some more live television screens, which kinda got me into that in the first place. I kinda thought: “You know, I’ll give it a go”. It was the hardest job I ever had to come to terms with because everything is live. Nothing is scripted. People think you have a script. People think you’re reading off an autocue. There is no autocue. There is no script. Everything is memorised. So, you have to be flexible, because you may be given two minutes to do a forecast at the beginning of a programme. Something may run over, something may go under. Then all of a sudden you have to lose 30 seconds, or you have to add-on 30 seconds.

I couldn’t do that! Do you have a favourite place to get outdoors in Northern Ireland? Somewhere you like to go for a walk or a hike?

You see, I love coastal areas. I love the likes of Ballycastle, the Glens of Antrim, Carnlough and that kind of thing. Outdoor high ground kind of areas as well. I do love the likes of Divis. Sometimes I go up there along the boardwalk. It’s a longer walk than I thought it was going to be the first time. I thought I would take a little detour around the long walk. Three hours later I arrived back at the car! Things like that, where you have the big panoramic views over the city. Even Cavehill, just to sit up there and chill. A few years ago we did Cuilcagh and it was class. Things like that – Mount Errigal and Benbulbin in Sligo. Those are my kinda outdoorsy places. Not too taxing. Something when you get to the end, you have the big reveal. 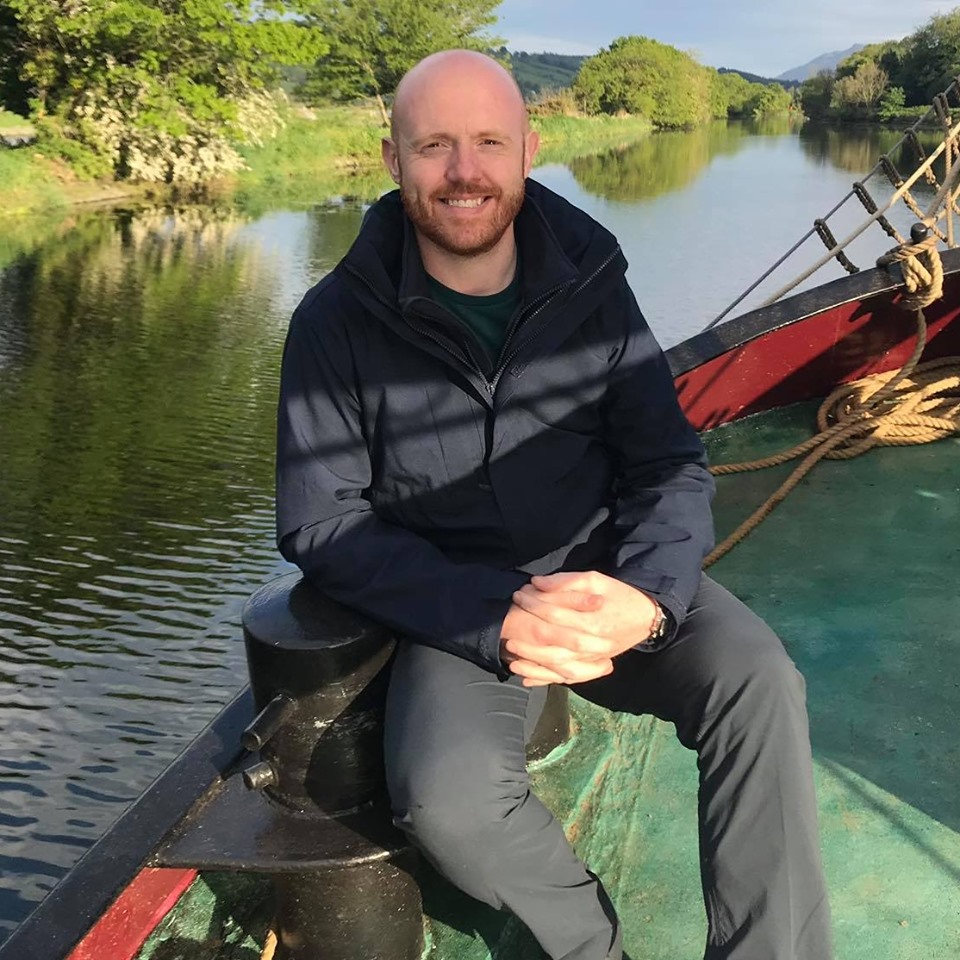 Did you go to Cuilcagh before the boardwalk was there?

No, we went just after the boardwalk. I think it’s great when you see people talking about it – it’s the Stairway to Heaven. It really is. Like when you get there, it’s a good brave dander. I’m sure you know yourself when you go there, you need to be prepared with your supplies. It’s a good walk. 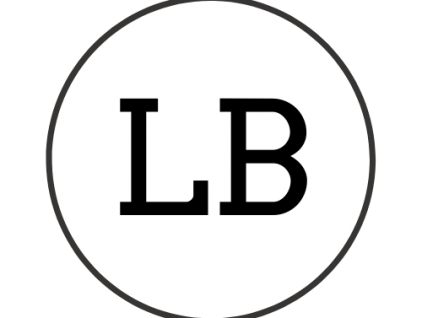 Barra, what would you say sets Northern Ireland apart from the rest of the world in terms of its landscape?

To me, it’s just the ruggedness, isn’t it? You have that round the coast and that’s why you see the likes of Game of Thrones and all the different movies being filmed there. A lot of the locations are based around our coast. I mean, I’ve been to New Zealand and South East Asia. While some of it’s beautiful, it’s not more beautiful than here, if that makes sense. I think that’s what makes it stand out. People appreciate it.

What would you rather have – mountains or beaches – if you had to chose between one of the two?

Just for the outdoor walking kinda thing, probably the coastal areas for me. We did bouldering and stuff for the series I did a few years ago, ‘Coast Lives’ – we reported that. That was great craic. Climbing up those rocks, which I will never do again! But you know, just getting out there when it’s a lovely day – you can’t beat it.

Where did you go bouldering?

Portbraddon. It’s like a wee nook on the Antrim Coast. It was really good. 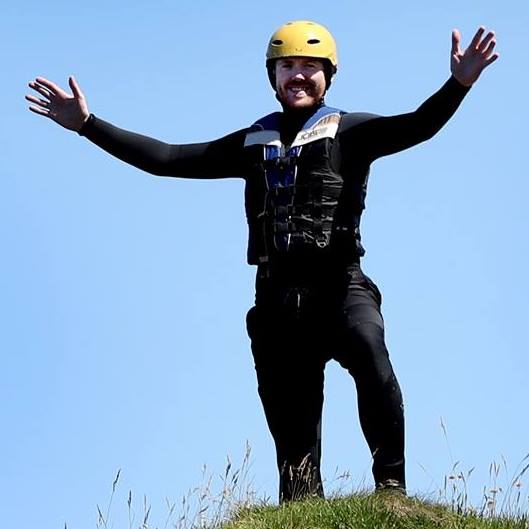 Some questions you’ve got on Instagram from people (they’re quite random!): “What’s your favourite song, Barra?”

Tough one. I’d say it’s Jennifer Hudson’s “Spotlight”, probably. It’s the only song that I kill in karaoke. I’ll go with that.

Somebody else asked: “What’s your cheekiest wee snack whenever you are out hiking?”

I don’t know actually. I’d probably be more inclined to bring crisps. There’d also be chocolate or something. It would be probably be crisps, though.

The strong ones – like prawn cocktail, smoky bacon, all that. None of that cheese and onion nonsense.

Another random one: “Do you wear suncream on the telly? If so, what factor?”

This is a good one: “Who would reach the top of Slieve Donard first, Barra Best or Frank Mitchell?”

No hesitation there! A final one: “Barra, why are you the best-looking weatherman on the telly?”

Am I? I don’t know who asked that question, but maybe they should go to Specsavers. I don’t know, but thank you very much for saying it! 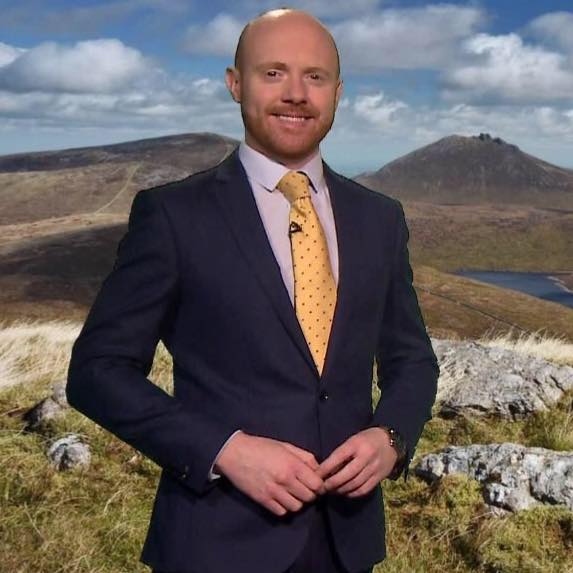 Is there a cause to do with weather and the environment that’s particularly close to your heart?

I’m aware of the kinda things that are happening in terms of climate change, particularly around plastics and everything that has been televised recently. It’s something that we definitely need to keep an eye one, cause we obviously get the quarterly reports from “Climate Matters” for example, which tells us the past 10 years were the warmest on record and temperatures are just going up. So, yea, it is definitely something that we need to look at a bit more and need to talk about more to get people to act. I think some people think: “Oh it’s just something that’s happened, but it’s not going to be forever.” Trends suggests otherwise, so unless we do something, we may not be here enjoying life the way it is in 50/60 years, you know.

Just coming to the end here, Barra. Have you got a final message for your social media fans?

Just keep doing what you guys are doing, because you know a lot of times we can look at the weather charts and we have the weather story that we are telling you, but a lot of the time now – because of social media and because it’s interactive – we get to use your information to tell the story and that can be photographs you send in, videos that you send in, etc. That helps us demonstrate across all of our BBC output what our weather is like. Rather than just telling you tomorrow it’s going to rain, or tomorrow is going to be sunny, we say “Look, you know that it was sunny today, have a look at this photograph sent in from Portrush, and have a look at this one from Fermanagh”. It helps us tell the story, so keep doing what you’re doing!