From Donard to the Drakensberg 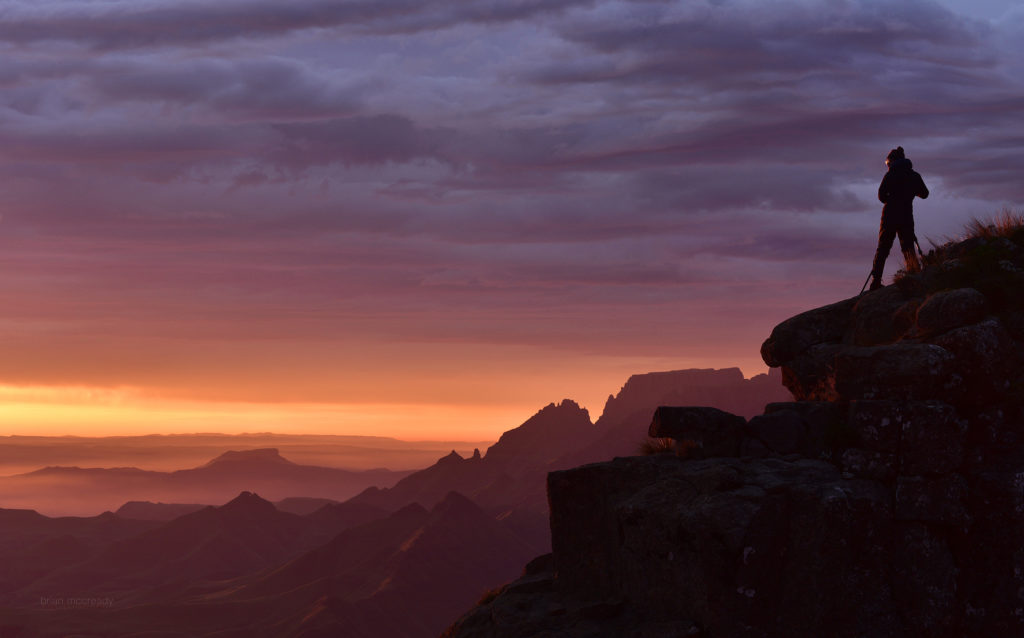 When I received a text message one morning last September which began, “I have an interesting proposition for you…” I was immediately interested; especially as it was from Ryan Simpson (a UK Mountain Photographer of the Year winner). By the time I’d finished reading the second part of his message, which continued “…depending on how adventurous you’re feeling” I was pretty much already hooked.

Although I’d known Ryan for several years through social media, commenting on each other’s photographs of the Mourne Mountains, I’d only actually spoken to him on two previous occasions when we had accidentally and very briefly crossed paths (literally) when walking in the Mournes. So I was naturally intrigued to find out what this proposal was.

Ryan revealed that he had been invited by Alex Nail, a professional landscape photographer and adventurer from England, to join a group he was leading to the Drakensberg Mountains in South Africa. Alex (a winner in the International Landscape Photographer of the Year competition) had also asked Ryan if he knew of any other ‘competent hiker/camper/photographer’ who might be interested in joining the group.

I have to admit, I was rather flattered when Ryan said that my name automatically sprung to his mind. He revealed that it would be a ten day trip, a couple of days longer than Alex’s usual trips. It would also cost slightly less than one of his usual trips because as the group was to be made up of experienced hikers they would be expected to carry most of their own kit, reducing the need for as many porters; and as it would also be made up of competent photographers, there would be no workshop-style tuition provided. Ryan sent me a link to Alex’s website that included further details of the trip which indicated the group would trek along the top of the Drakensberg escarpment for eight days at altitudes of over 3000 metres.

After thanking Ryan for suggesting me for the trip, I said I would give it some thought over the next few days, and told him I’d let him know. I told my wife about it, and she said I should go. I told my sons about it, and they said I should go. And then I spent the next couple of months coming up with every conceivable reason why I shouldn’t go. It was too much money to spend on a trip just for myself. The dates were too close to an extremely busy period at work. I might do a bit of hiking and camping in the Mourne Mountains, but there was no way I’d be able to cope with sleeping for eight nights in a tent. I couldn’t carry a rucksack that would weigh over 25kgs, for eight days, at altitudes of over 3000m, while trekking up to 16kms per day. I wouldn’t be able to cope with the heat of the sun during the day or with the plummeting temperatures during the night. I’d struggle to keep up with younger, and more experienced hikers. I’d feel like a complete novice beside these other very competent photographers. My anxieties, real and/or imagined, were enough to make Woody Allen look like the eternal optimist.

Even though the idea of being involved in such an adventure excited me on the occasions when I still gave it some thought, by November my sense of self-doubt had won the day, and I’d convinced myself that it wasn’t for me. In addition, I hadn’t been in touch with Ryan again, and I was sure the places had long since been filled.

Then at the beginning of December I stumbled upon a social media post from Alex where he explained that he had a place left on the trip, and invited any “strong hikers and independent photographers” who were interested to get in touch with him. I don’t know what was different about that morning, but suddenly I’d put myself in that ‘strong and independent’ bracket (I can just imagine the look on my wife’s face if she ever reads this bit). Before I knew it, I had contacted Ryan to confirm if this was the same trip he had mentioned and if he was still going on it; and then I contacted Alex. Within days I had booked my place, paid the deposit, and organised flights to Johannesburg. From that point there was definitely no turning back. On this occasion at least, my procrastination hadn’t resulted in another missed opportunity to regret on my deathbed!

Alex sent a summary of the trip’s proposed itinerary. I began looking up images of the places it mentioned to see what they looked like. To be honest, I’d barely heard of the Drakensberg Mountains, let alone ever considered visiting them. I went to Alex’s website and watched his inspirational time-lapse sequences of the Drakensberg. Now I was getting excited. Suddenly there was something different to look forward to; something to temporarily end that nagging sense of endless routine. Just as suddenly, there also seemed to be so much to do, and so little time left to do it.

While I was reasonably confident that I could manage the hiking demands of the trip due to my frequent hikes in the Mournes, I knew I needed to lose some weight. There was no point carrying extra kilos around my middle when I’d have to carry upwards of twenty-five on my back. If I was going to do anything about it, I knew I’d better start immediately. I began to diet (a bit), and started to accompany my wife (sometimes) on her regular long walks in the evenings in order to improve my overall level of fitness. I even took up football again (briefly), until my Achilles screamed for me to stop after only a few weeks.

Over the next few months there was a lot of Googling. Alex sent a very helpful guide to everything that would be required for the trip. While I had clothing, camping gear and equipment which were adequate for my brief, but frequent forays into the Mournes, I wasn’t sure if they would suffice for an eight day trek in the Drakensberg Mountains. The result – I’ve never done so much on-line shopping in my life.

Two camera batteries wouldn’t last too long on an eight day photographic trip, so I bought another five. I had a 16-35mm wide angle lens, and a fairly heavy 24-70mm lens, both of which would have been perfectly sufficient. However, after weighing up the options I decided to buy a new 70-300mm lens giving me a much longer focal range, and opted to leave at home my 24-70mm lens which weighted nearly twice as much. Every ounce was going to count when it meant carrying them around all day.

As everybody knows, size matters too. I already had a seventy litre rucksack that I’d bought thirty years previously when backpacking around Australia. While it was still structurally sound, ergonomics had evolved somewhat since then. So I splashed out on a new Osprey seventy litre rucksack to carry my sleeping bag, mattress, camera gear, tripod, and enough food, clothing and accessories for eight days.

Ryan and I also arranged to meet up to go walking together in the Mournes in a bid to get used to carrying such heavy packs over long distances, compare notes on our preparations for the trip, discuss vaccinations and dehydrated meal options, and (without actually having a conversation about it) work out if we could survive sharing a small two man tent with each other for a week at the other end of the world. We jumped straight in. For our first hike we started at sea level in Newcastle and hiked up Northern Ireland’s two highest peaks, Slieve Donard and Slieve Commedagh. Our next route saw us take on Slieve Muck, Carn, Slieveloughshannagh, Slieve Meelbeg, Slieve Meelbeg, and Slieve Bearnagh.

After several hikes in the Mournes, all of which seemed to be on some of the wettest, windiest days during the first few months of the year, we reckoned we were physically ready for just about anything the Drakensberg could throw at us. And other than the difference in our age, and Ryan’s questionable taste in football teams, we also seemed like we were compatible enough to cope with each other too.

Back in December when I first booked my flights, the trip seemed a very long way off. I had planned to do so much preparation in the intervening months by way of taking more photographs with my new zoom lens, hiking more often and over longer distances in the Mournes, and perhaps even arranging the odd night or two camping. As it turned out, I probably took fewer photos during those months and visited the Mournes less often than I had in the previous couple of years. Time just seemed to speed up.

Before I knew it there was only a matter of days to go. My focus switched from gathering stuff for the trip to working out how to stuff it all into my rucksack. Much easier said than done! A few luxury items were deemed surplus to requirements and missed the cut. Everything else was rolled, folded or squashed to within an inch of its life until eventually each remaining item found just enough space for the journey.

Finally, the only things left to do were to choose my seat on the plane, print off my boarding pass, and catch a bus to Dublin airport to meet up with Ryan, where we would await the flight that would take us on the adventure of a lifetime.

On our first morning we were treated to a dramatic cloud inversion whcih came right up to the edge of the escarpment. 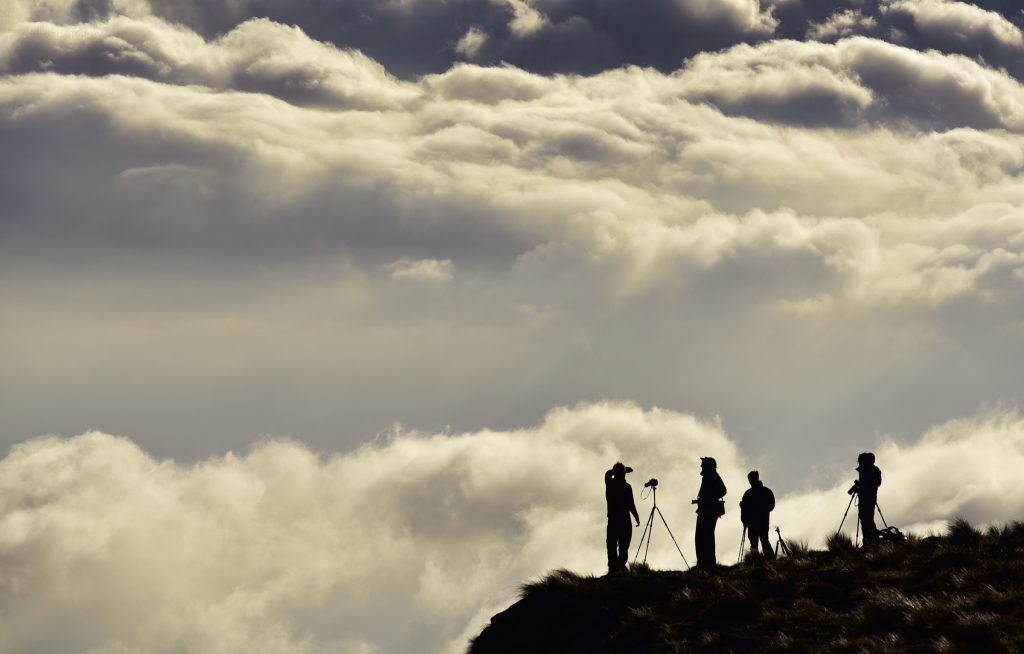 Standing on the edge of the escarpment, overlooking the Mnweni Pinnacles and the Mnweni Needles, after a day hiking. 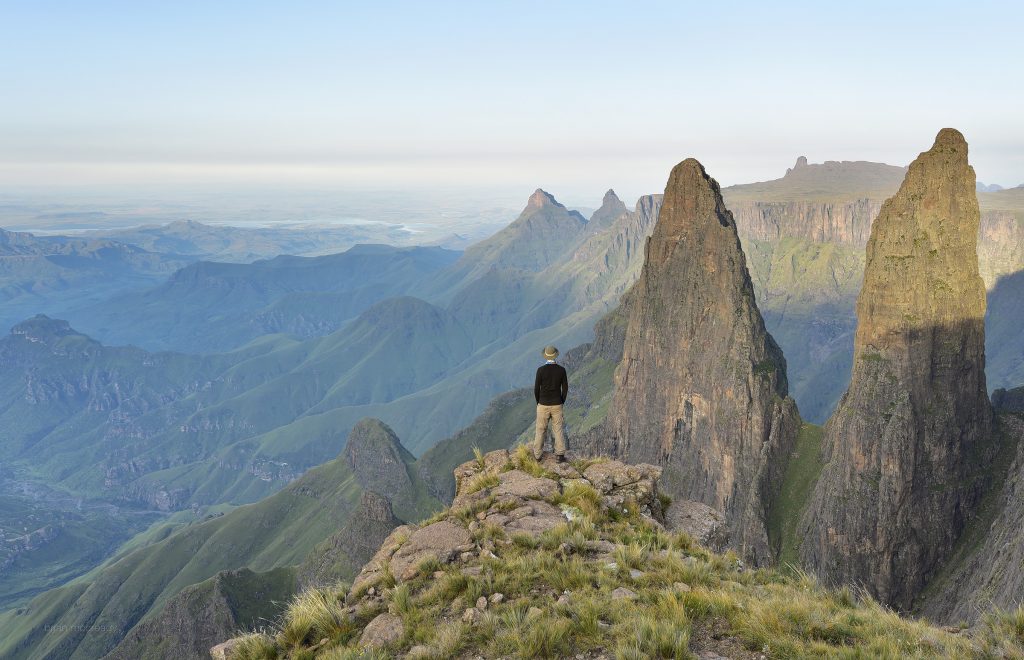 Just after sunrise above the Madonna and her Worshippers. 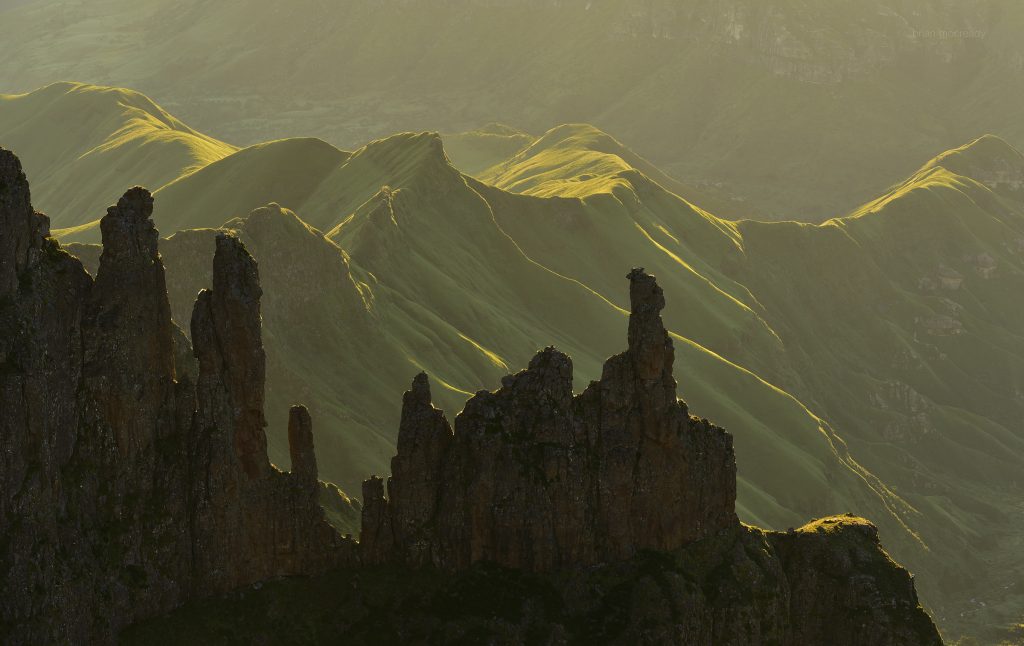 Bright sunshine and blue sky accompanied us for the majority of our trip, so a mid-afternoon thunder and lightning storm proved a memorable highlight. 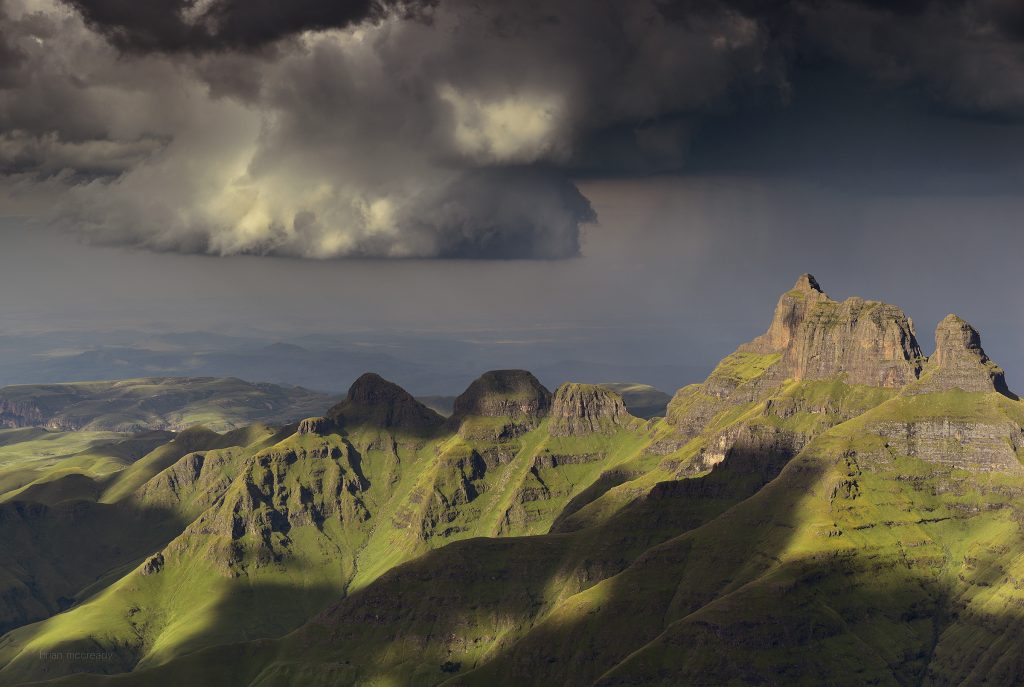 We were very fortunate that the distinctive peaks and ridges of the Drakensberg Mountains were illuminated at sunrise on each morning of our trek, if even for only a few moments. 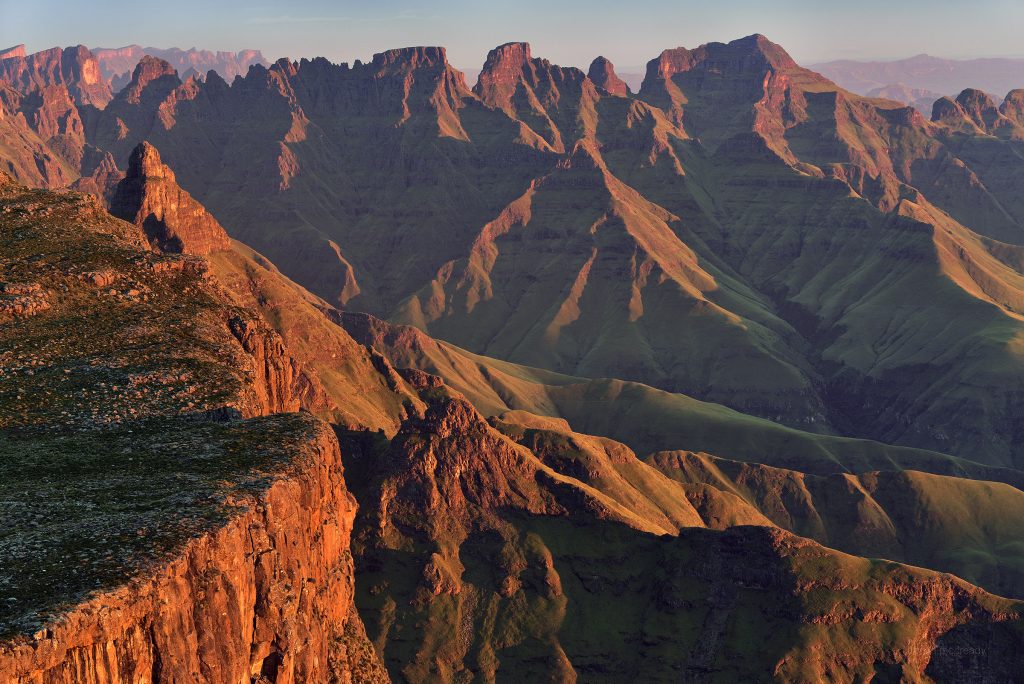 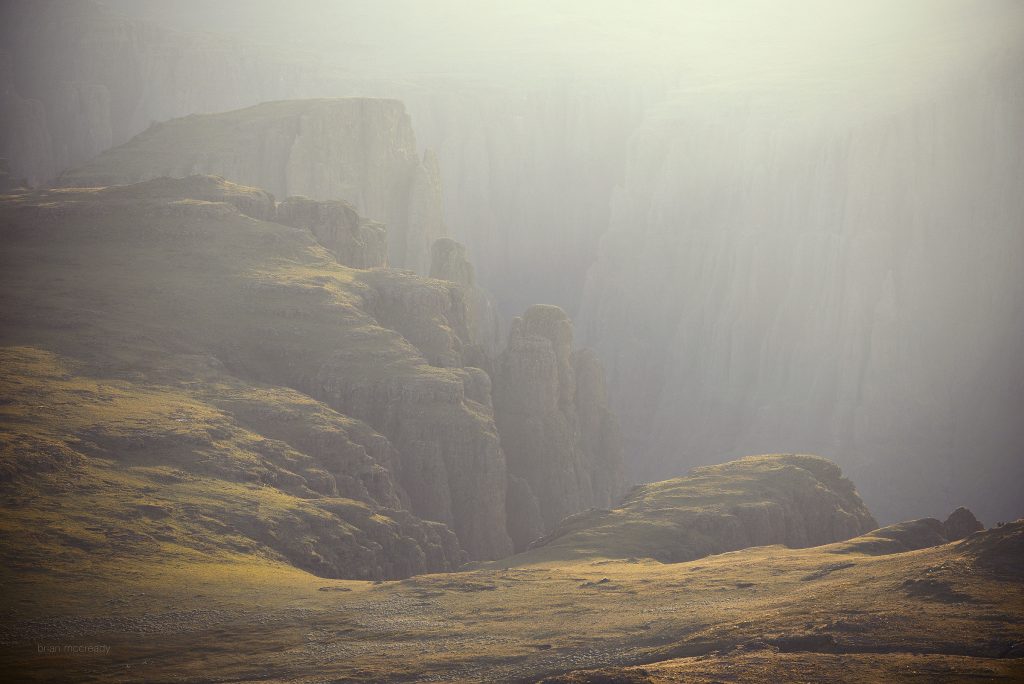 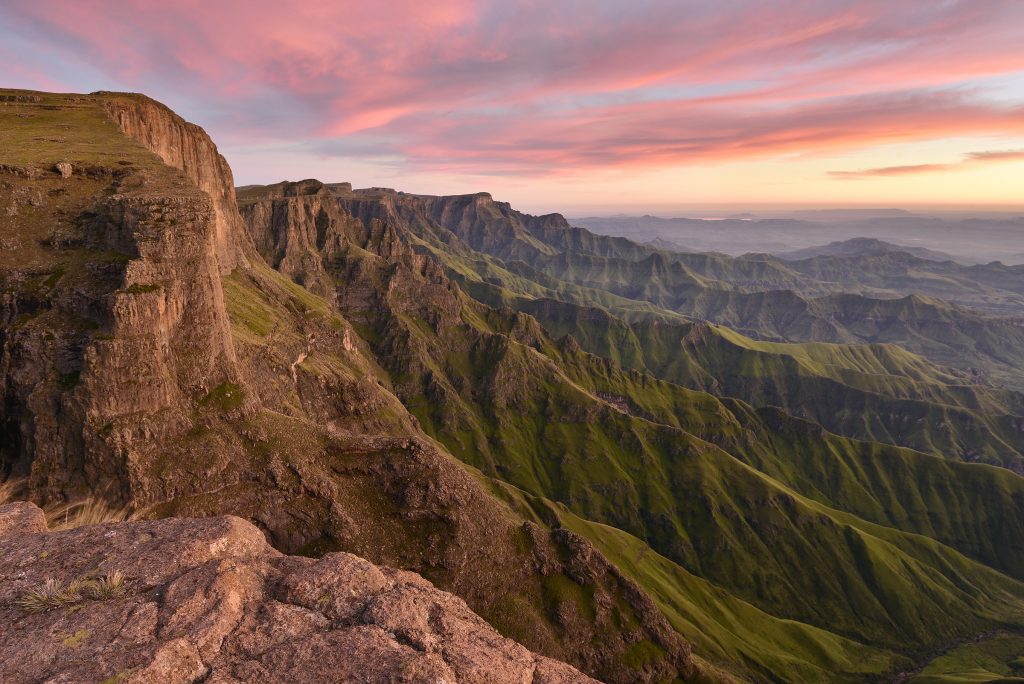 The drama of an evening thunderstorm unfolds before our eyes. 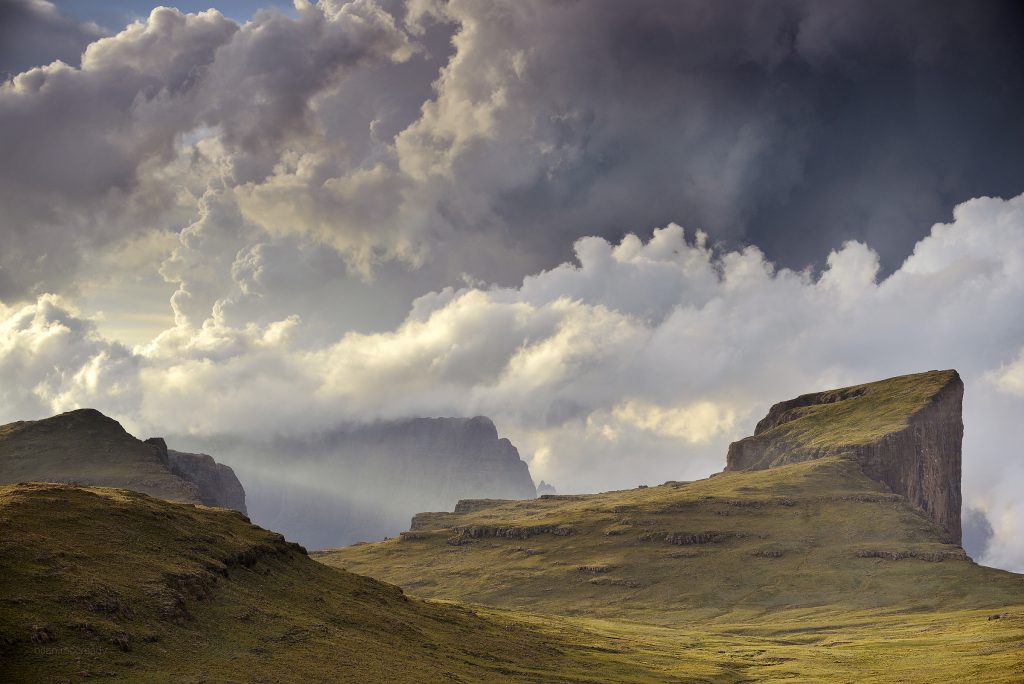 Our last morning was just as dramatic as each that had gone before with a stunning display of colour at sunrise. 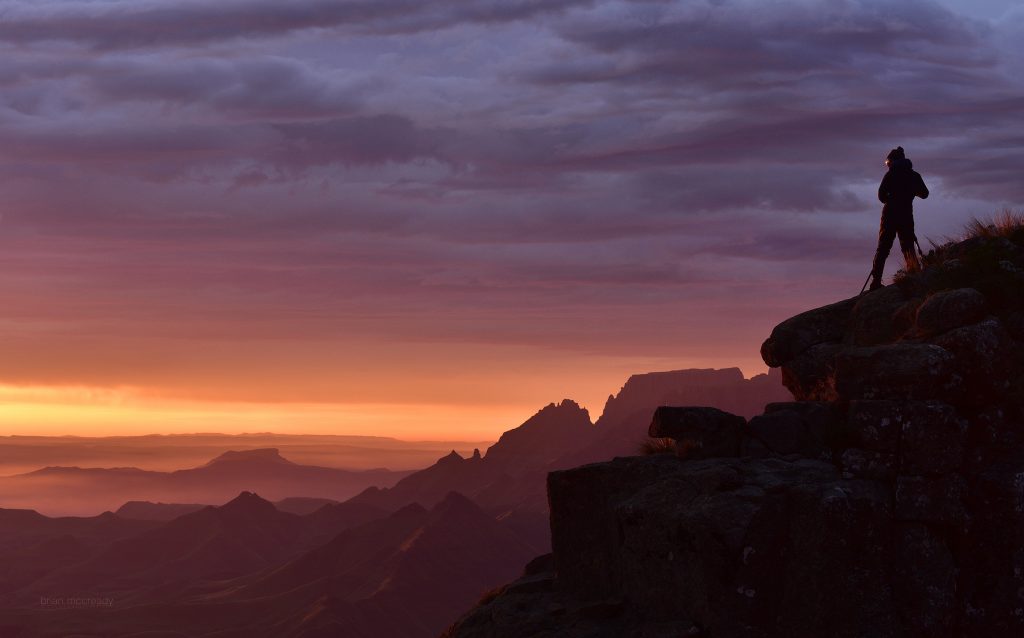