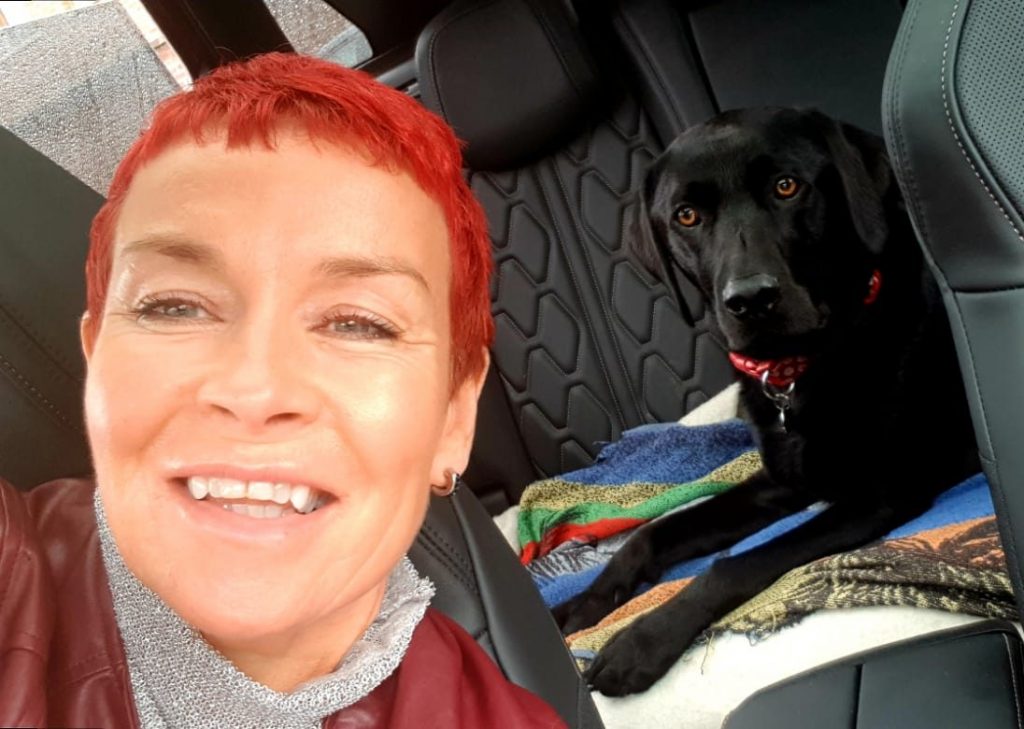 It’s the middle of December. I’m waiting in a café in central Belfast for BBC News NI weather presenter Cecilia Daly, a familiar face for most throughout the country. Quite fittingly, the weather’s making its presence felt outside – it’s lashing.

When Cecilia arrives (bang on time, of course) she’s all smiles and charm, exactly as she is on TV. The waitresses know who she is and hover hopefully nearby, maybe a little nervous, as I am. Bar grabbing Bryan Adams on the shoulder during a gig at the Odyssey about ten years ago, this is my first real encounter with a famous person (doubt Bryan remembers, either).

Within moments, however, we’re chatting away over coffee and scones. Cecilia – or Cee, as she also goes by – is incredibly easy to talk to.

“About ten years ago I started working at the BBC in Belfast and I’ve been here ever since,” she tells me, between scone bites, “so therefore weather’s my passion – I love it.”

READ: Slieve Croob: the summit for all seasons

I wanted to interview Cecilia because, as a fellow Twitter enthusiast, she frequently interacts with what Trekking NI puts out each week; she’s also always willing to answer questions, ‘like’ posts, and share the pictures on her newsfeed that catch her eye. And when I ask which images are most likely to make her hit the ‘Retweet’ button, her answer is immediate and unequivocal.

“If it has a dog in it. And nice pictures, especially if they depict the weather well. I’d also share it whenever the weather’s not so good. I think that’s important, because it’s not just about being a brilliant photographer. It’s about capturing the weather in action.”

It doesn’t take long for the subject to shift completely to our canine companions, either.

“We got a dog three years ago, a black lab – he’s called Pedro,” Cecilia explains. “He sometimes comes running with me. Do you know, I’d never had a dog before and I can’t imagine my life without him now, to be honest.

“We’re quite lucky where we live because we have parks nearby: Orangeville Park, the Conswater Greenway, the Comber Greenway.

“It was during our walks that I realised how many cyclists are out there as well. So I started to become interested in what kind of weather cyclists and walkers like.”

Cecilia elaborates further, explaining how her interest in the weather helps her appreciate the beauty of changing seasons. She also thinks about how it affects people in their leisure time (whether they’re walking, hiking or cycling) and believes social media has helped everyone become “more aware” of what people do with their lives.

“I just think fresh air and being out and about is so good for your head, do you know what I mean?”

And a favourite place to get outside that she’d recommend?

“Belvoir Forest. I love Belvoir actually. I really like it because it’s a little bit up and down with the hills. It’s also quite sheltered when it’s windy or raining. And there’re loads of places for Pedro to explore, which is a bonus.

“My other local favourite would be Redburn, just outside Hollywood. You go from quite a low level up to 500 feet at the top, and the view over Belfast harbour is amazing, if it’s clear enough.

“I just think fresh air and being out and about is so good for your head, do you know what I mean?”

As you’ve probably guessed, Cecilia’s a keen runner and fitness buff. However, as she explains, that wasn’t always the case.

“For quite a long time, since I was a teenager basically, I was terrible at sport at school because I’m so short,” she tells me.  “But I’ve always kind of been into my fitness and stuff, and I love weights and things like that, especially now.”

And the next obvious question – does she hit the gym?

“Oh yeah, totally – at least twice a week. I usually run a couple of times a week, and I do a spin class and weights as well. I’m certainly a fanatic.”

But while she spends plenty of time on the treadmill, nothing beats getting outside and taking in what Northern Ireland has to offer.

“The North Coast is my other big favourite place and it always has been, even before we had Pedro. Unless there are 90-mile-an-hour winds and snow, I’ll still get out when I’m there.

The North Coast clearly holds a special place for her, too.

“I love it whenever it’s a bit wild, because the waves are fantastic. The sky is so dramatic and you’re still away from the city, and all the busyness of work and stuff. You just get your head completely cleared. And then when it’s really cold, windy and wet outside, there’s a nice bar with a fire, and you can have a nice wee glass of wino. That’s all part of it.”

Another favourite spot for Cecilia is Cave Hill, somewhere I’m actually not too familiar with just yet. She’s quick to fill me in on it, though.

“When you see it from a distance you think, ‘Maybe it’s quite hard’, but the route we took from the car park at Belfast Castle was actually quite easy. I would definitely do it again. You see a lot of people running up there as well.

“At the beginning of the year I also stayed in a lodge in Fermanagh for the weekend. Fermanagh’s amazing – it’s so different. Great National Trust places there, too. And even though it was cold and quite snowy at the time, it was lovely.”

“A job came up in the Met Office and I decided to go for it. I then trained as a broadcaster, and I kind of fell in love with it.”

As we work our way through the coffee and snacks, I ask Cecilia about how she first became interested in weather – did something during her school days spark it off?

“I liked subjects that were all about showing your work. Maths, physics, and geography were the subjects I liked at school. I didn’t finish my A-level education, but a job came up in the Met Office and I decided to go for it. I then trained as a broadcaster, and I kind of fell in love with it. So that was kind of how it happened.”

She tells me more about the various types of broadcasting she tried, including radio, which was great because “you didn’t have to think about what you would wear”. However, this leads on to a more serious topic.

“Working as a female in broadcasting can be tough. A man can wear a suit all year round, just change his tie and shirt occasionally, but it’s different for a woman.

“And we do it to ourselves. It’s something that seems to be built in. We look at a female and make a decision based on what they look like, before we even listen to what they say.

“So it took a wee while before I was brave enough to go into the world of TV, but I love it.”

And another big issue for Cecilia is one that many of us are thinking about a lot right now.

“Young people today have a much better grasp of what’s going on in the world as a whole than they did in my time.”

“They want to know how it’s going to impact their lives and their jobs, and how they’re going to have to change things.

“Some countries are already educating young people in that way. They’ve turned things around to make themselves more environmentally friendly and greener.

“But young people today have a much better grasp of what’s going on in the world as a whole than they did in my time.”

As we start to round things up, the subject turns to our favourite holiday destinations. And while Cecilia’s obviously well-travelled (much better than me, anyway), she admits that home remains firmly where the heart is.

“It’s great to see really, really special things, like the Wonders of the World, or go to a country where the culture is so, so different from what you’re used to. See the extremes, if you like. And then you come back and see how it all compares to your own country, in your own wee place, on a smaller scale.

“We’re spoilt for choice in this country.”