Every Game of Thrones Location in Northern Ireland 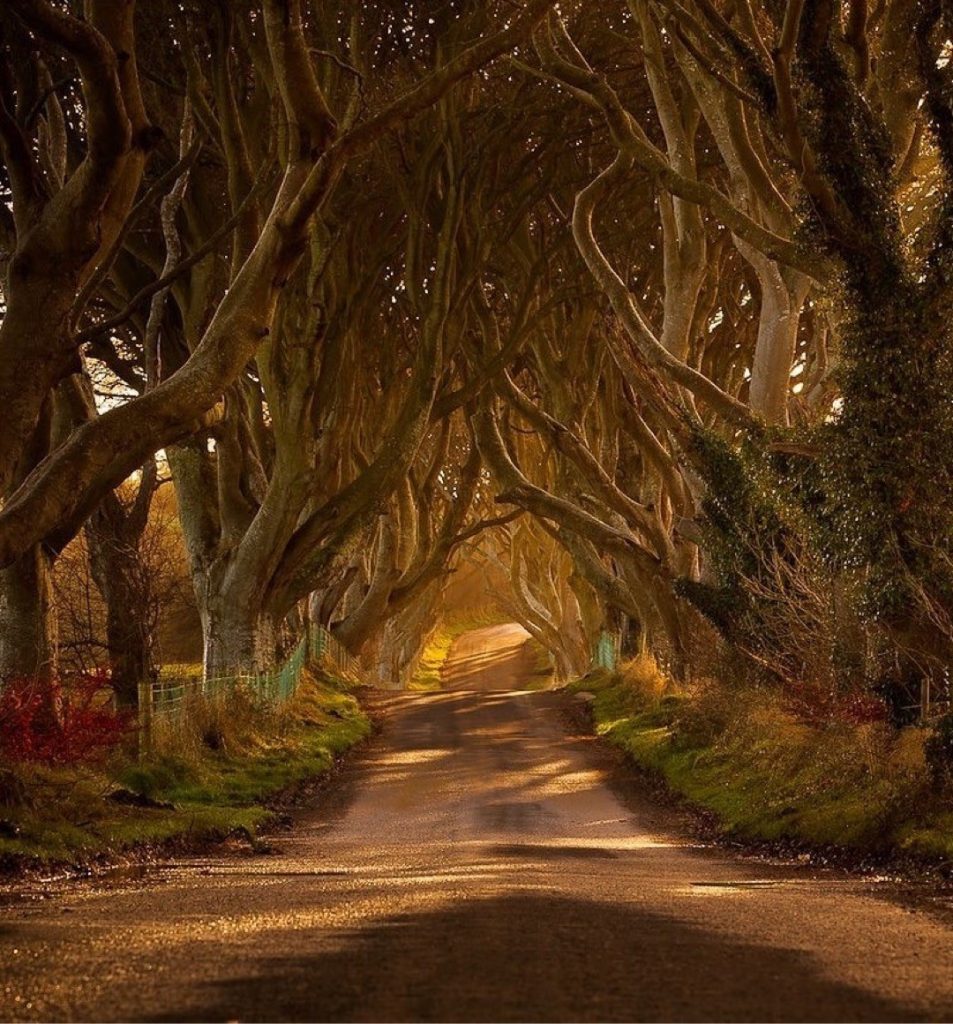 There’s no doubt about it. Northern Ireland is a visually stunning part of the world.

The country is known for its castles, monuments, glacial valleys and mountains, not to mention spectacular coastal views.

Throw in forbidding forests too, and it’s no wonder that Northern Ireland has been inspiring fantasy writers and filmmakers for decades.

As kids (or adults!) many of us have rummaged in our wardrobes, only to be disappointed when we didn’t find a secret door to Narnia!

But all we actually had to do was head to Northern Ireland, where CS Lewis was born and gained his inspiration for the striking landscapes of The Lion, the Witch and the Wardrobe.

Fast forward 60 years and Northern Ireland is, once again, a fantasy lover’s paradise, albeit in not such a family-friendly fashion!

The awe-inspiring landscape was the backdrop for many filming locations from the epic, multi award-winning Game of Thrones, which was based on the best-selling novels by George R.R. Martin.

So, whether you are a lover of stunning scenery, a Game of Thrones fanatic or both, join us on this tour of the fantastical, breath-taking country of Northern Ireland.

Fed by a waterfall, this spectacular cave is in Belmore Forest.

Be sure to avoid it during inclement weather though, as it can swell to a torrent.

And that would perhaps be scarier than running into the Brotherhood without Banners, who used the cave as their hideout in Season 3.

Formed by molten lava flows 60 million years ago, this Antrim Plateau is stunning, its steep cliffs dominating the skyline of nearby villages.

Listen out for the thunder of hooves… the plateau was the perfect setting for the Dothraki Grasslands, where a stranded Daenerys encounters a horde of horse warriors.

Also known as Magilligan Point, Downhill Strand is a 7 mile stretch of sandy beach located near Castlerock. Overlooking the beach is Downhill Estate, the most wild and dramatic headland in Northern Ireland.

The location was at it’s most dramatic, however, when Lady Melisandre sacrificed the seven gods of Westeros at Dragonstone. The Mussenden Temple overlooking the beach was a prominent feature in several scenes.

In the absence of burning effigies, it’s a stunning place to sit and watch the sunset.

When Jamie Lannister and Bron landed on the Dorne Coast to rescue Myrcella, they were actually on the two miles of golden sand that is Portstewart Strand, home to some of the prettiest beaches in Northern Ireland.

If you can avoid the crowds, it’s the perfect place to take a stroll and breathe in the picturesque backdrop to their approach to the Water Gardens during the War of the Five Kings. Just watch out for the battle-ready sand serpent sisters!

The medieval ruin of Dunluce Castle, which was originally built in the 1500’s, is perched atop jutting cliffs overlooking the Causeway Coast.

The gorgeous, crumbling ruins are well worth exploring, but make sure you avoid visiting on stormy nights… the rulers of the Iron Islands, the House of Greyjoy, weren’t the only dark spirits inhabiting the castle, which is accessible only by a narrow bridge.

Legend has it that Maeve Roe, the only daughter of Lord MacQuillan, was locked in one of the turrets for refusing to marry her chosen suitor because she had fallen for someone else. When she and her beau tried to escape, the mighty waves flung their little boat into the rocks and they drowned. And her wails can still be heard.

Ballintoy Harbour, at the bottom of a steep cliff, just a ten-minute drive from the famed Giants Causeway, is stunning, particularly at sunset.

The harbour was the Game of Thrones setting for a number of Iron Islands scenes, most notably Theon’s return to the fold, when he met his ball-busting sister Yara and was baptised in the name of the Drowned God.

The quarry at Larrybane – one of the most sheltered locations along the Causeway Coast – was used as Renly Baratheon’s camp in the Stormlands in Season 2.

It’s where the tournament took place which introduced us to Brienne of Tarth.

READ: A Hiker’s Guide to the Mourne Mountains

Believed to be the biggest expanse of climbable rock in Britain or Ireland, the impressive Fairhead rises 600 feet above sea level.

Most sane people would probably rather take their chances scaling the rocks, than meeting Daenarys and her dragons here at Dragonstone, like Jon Snow did in ‘The Queen’s Justice’!

With the sea stretching all the way to Scotland and light playing on the cliffs, the hard to visit Murlough Bay is a Northern Ireland gem.

Whilst wandering around this secluded spot, you can imagine the thud of hooves from Theon’s horse ride with his sister, Yara.

Or picture Davos Seaworth being shipwrecked in the bay after the Battle of Blackwater.

Watch out for passing slave ships though… the location was also featured in Game of Thrones when Tyrion Lannister and Ser Jorah Mormont were taken prisoner as they were making their way to Meereen.

Cushendun is a picturesque little town location on the eastern coast of North Ireland, that serves as a great lunch spot.

The caves were the location where Davos Seaworth and Lady Melisandre landed ashore at Storms End in Season 2.

Formed over 400 million years ago, the creepy Cushenden Caves were also the spot where Melisandre gave birth to the shadow assassin. So, watch your back!

READ: Top 5 Hikes for Children in the Mourne Mountains

Glenariff, the Glens of Antrim (Runestone)

Known as Queen of the Glens, Glenariff is the biggest of the Glens of Antrim, which were formed by glaciers during the Ice Age.

The lush glen, with gorgeous greenery and three miles of walking trails, stared as Runestone in the Vale of Arryn, where Littlefinger takes Sansa to meet with Lord Royce and watch Robin Arryn training in The Vale.

Further inland, located between Armoy and Stranocum, are the Dark Hedges.

This stunning avenue of 18th century beech trees – which is now only accessible on foot to preserve the trees – was planted by the Stuart family in the 18th century, to impress visitors as they approached Gracehill House.

Still as impressive, it is now more famed for its use as The Kingsroad, on which Arya Stark escaped from King’s Landing disguised as a boy.

Legend has it that St. Patrick tended sheep in this valley – which lies beneath Slemish Mountain – after pirates slaughtered this family and brought him to the area.

Since the massacre makes it sound like a scene from Game of Thrones, it’s no surprise that this stunning location was used in the show. The valley became the long-grassed plains of the Dothraki sea, where Daenerys and Khal Drogo made camp in Season 1.

Magheramorne is a small, pretty hamlet that is home to just 75 residents.

The cement plant closed in the 80’s and, after years of disuse, the old stone quarry was brought back to life as the backdrop to Castle Black.

The massacre at Hardhome and the battle of Blackwater – in which the Lannister army, commanded by acting Hand of the King, Tyrion, defends the city of King’s Landing – were filmed here.

In Season 5, Tyrion Lannister is bound, gagged and thrown into a stolen boat, destination Meereen, by a disgraced Jorah Mormont.

On the North East shore of the Lough is Shane’s Castle, a ruin near Randalstown, where the Winterfell crypt and dungeon scenes were filmed. It was also in the backdrop to that toe curling scene when Gregor Clegane beheaded a horse at the jousting tournament.

The river and its surrounding countryside are made up of a large wetland retreat with picturesque woodland and riverside trails.

The Quoile served Game of Thrones as the aptly named Riverrun, where Rob Stark and his mother Catelyn attended a Tully funeral.

Quintin Bay is home to one of the few occupied Anglo-Norman castles remaining in the region, built in 1184.

It also served as the location for Game of Thrones’ Stokeworth, where Jamie Lannister tracks down Bronn to ask him to journey with him to Dorne.

On the shores of Strangford Lough, Castle Ward is an impressive historic farmyard estate.

It was used as Winterfell’s courtyard, home to House Stark, before the Boltons’ siege. So, watch out for arrows… it was where the Stark children practiced their archery skills!

Also, on the shore of the Lough is Audley’s Field, where Jaime Lannister was captured and, later, released.

Inch Abbey, County Down (The Twins)

The abbey is a beautiful ruin in Downpatrick, with impressive views over the River Quoile.

As stunning as the setting is, don’t be surprised if it sends a shiver down your spine, as it was here that Robb Stark set up camp and, in the hope of crossing the Green Fork, sought an audience with the treacherous Lord Frey.

Oak from the picturesque Tollymore Forest was used in the interiors of white star liners, including the Titanic.

As a more recent claim to fame, it was here, in the spooky Haunted Forest, that the Direwolf pups were found by Robb, Bran, Jon and Theon Greyjoy.

The dramatic slopes of the haunting beautiful Mourne Mountains offer some of the best hiking paths in Northern Ireland.

In parts, the board foothills and vast landscapes stretch for as far as the eye can see.

On our screens, the mystical mountains serve as the entrance to Vaes Dothrak, the only city on the Dothraki Sea, which is ruled and inhabited by slaves and the dosh khaleen and was visited by Kaleesi and Ser Jorah.

This granite mountain range offers some of the best panoramic views you’re likely to find in Northern Ireland.

It’s also North of Winterfell, where Bran and Rickon Stark took refuge in the crypts, after House Stark was seized by Theon, and where Bran first met Jojen and Meera in the woods.

So there you have it.

If you are a Game of Thrones fanatic, a history buff and a lover of jaw-dropping landscapes, a visit to Northern Ireland – to walk in the footsteps and relive the drama of the inhabitants of the seven kingdoms – is a must.