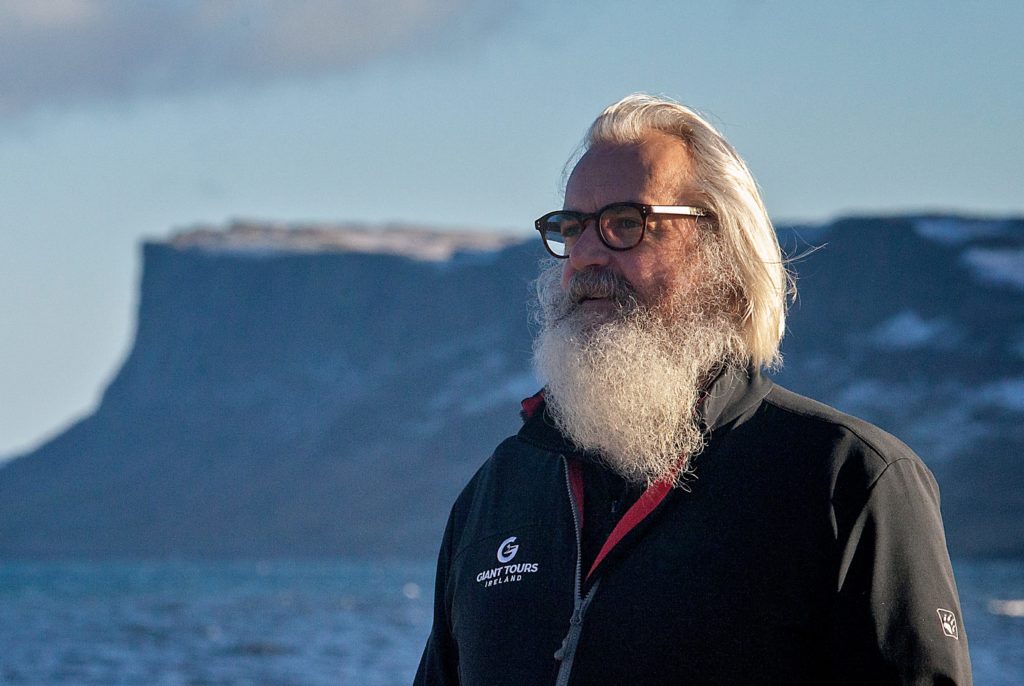 I recently met up with Flip Robinson of Giant Tours Ireland for a coffee and chat. Here’s what he had to say about his rapidly-growing business, the North Coast, and his time as a stand-in for some notable characters in Game of Thrones.

So Flip, tell me a bit about yourself…

I live in Ballycastle. I’ve got three kids: one of them has left home, one is in the middle of her A-levels, and the third is 11. What I do around Ballycastle is get outdoors, get out for walks, pretty much every day with my dog on the beach. Most days I am out doing my tours, showing people around the real world Westeros which is right on my doorstep. Most of the filming locations in Game of Thrones are right there, places that I’ve known for years.

READ: From Donard to the Drakensberg (Part 1) 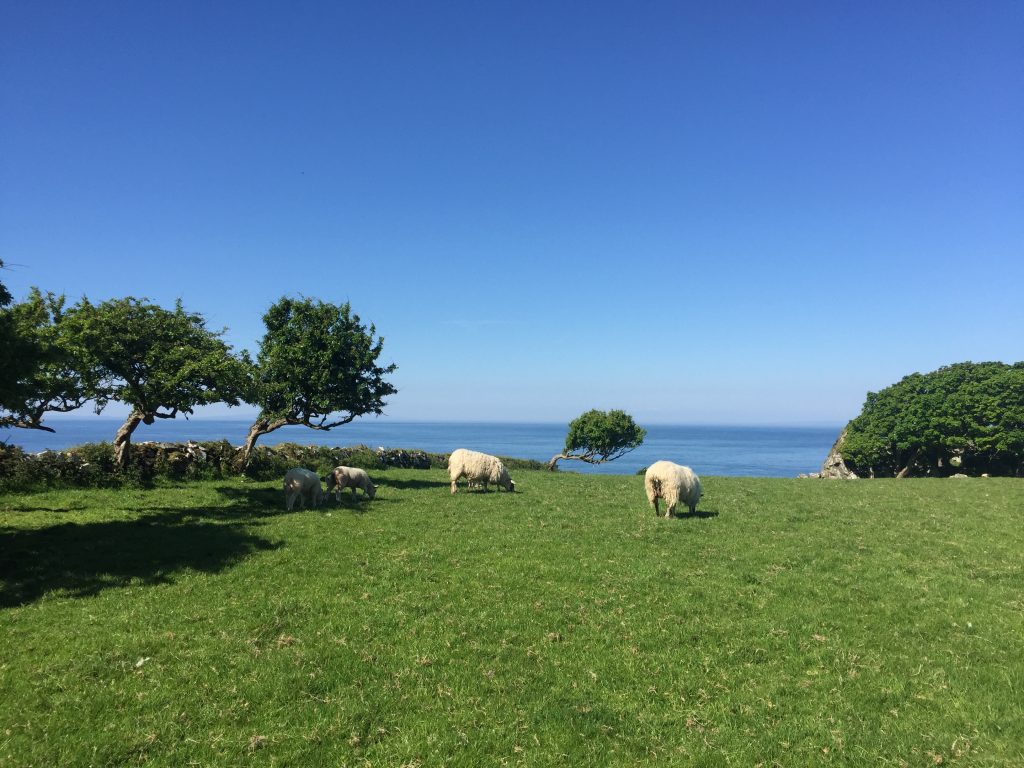 So how did Giant Tours come about then? Where did that all come from?

In 2015, I took a minimum wage job with the National Trust at Carrick-a-Rede rope bridge. I was standing there on my first day, watching all these buses and people arriving, coming to the North Coast. I was asking where were they going next, what they were doing. It tended to be just the big three of the North Coast: the Giant’s Causeway, the rope bridge, and possibly the Distillery. They weren’t seeing the likes of Murlough Bay or driving along Torr Road into the Glens. I thought: “These people are missing out. I’m going to buy a van and show these folks around.”

Then one day, I watched a whole cavalcade of Range Rovers driving into the car park. I stopped the first one, but when he got near me, I actually realised a sticker on his windscreen was car parking for the Game of Thrones Paint Hall Studios in Belfast.

He told me they were filming there next week, at Larrybane Quarry, so I said: “Oh right, right, well don’t let me hold you up. By the way, do you need any really tall, hairy guys?”. This guy said: “Yes, definitely, of course we do.” I found out later that this was one of the directors! 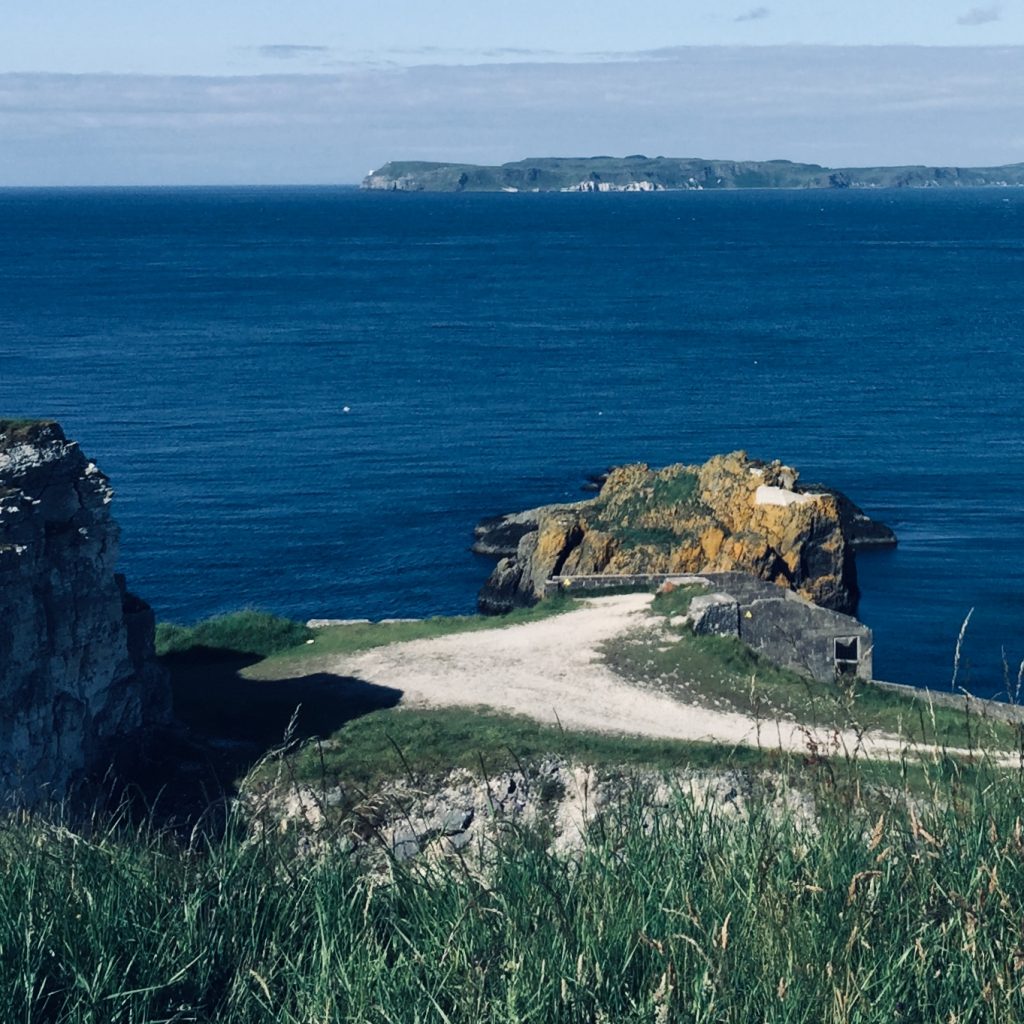 A couple of days later, I received a text from Extras NI asking if I was available (I’d signed up months beforehand). So I replied ‘Yes’ and gave them my name, and I also said: “I’m almost 6ft 9, and I have a full beard”.

The phone went crazy. There were about 3 or 4 texts. I received loads of emails. And voicemails. As I was replying, the phone rang again and one of the Assistant Directors for Fire and Blood Productions said: “Look, we would be really interested in getting some photographs of you that are more up to date.” My son took some pictures, front, back, sides, full height and the waist up. They replied: “That’s all perfect. We’re going to bring you in to see if you’re suitable.”

So they put me into a flack suit and furs and all that sort of stuff, and left me in a trailer to stew for quite some time. I was The Mountain as well as Hodor, you see. I had Nikolaj Coster-Waldau and Lena Headey act towards me in one of my first scenes. Jamie Lannister insults The Mountain, saying something like: “Is he all there?”, and I just turn and give him a dirty look. As soon as I did that, he flinched back. It gives me goosebumps even now – that man can act, he really can.

So, yea, that was my first day, actually on a major set. The next couple of weeks were in Banbridge Studios, the Linenhall Studios, Paint Hall Studios. A lot of green screen stuff. I met amazing characters on the show. An amazing crew. Everybody that works on that show is second to none. You know, they’re top of their game.

So, I had a great time, it was really good. Because I was wanting to start the tours, I thought: “Maybe I should add this one in as well. You know, do a Game of Thrones tour as well, when I get going.” 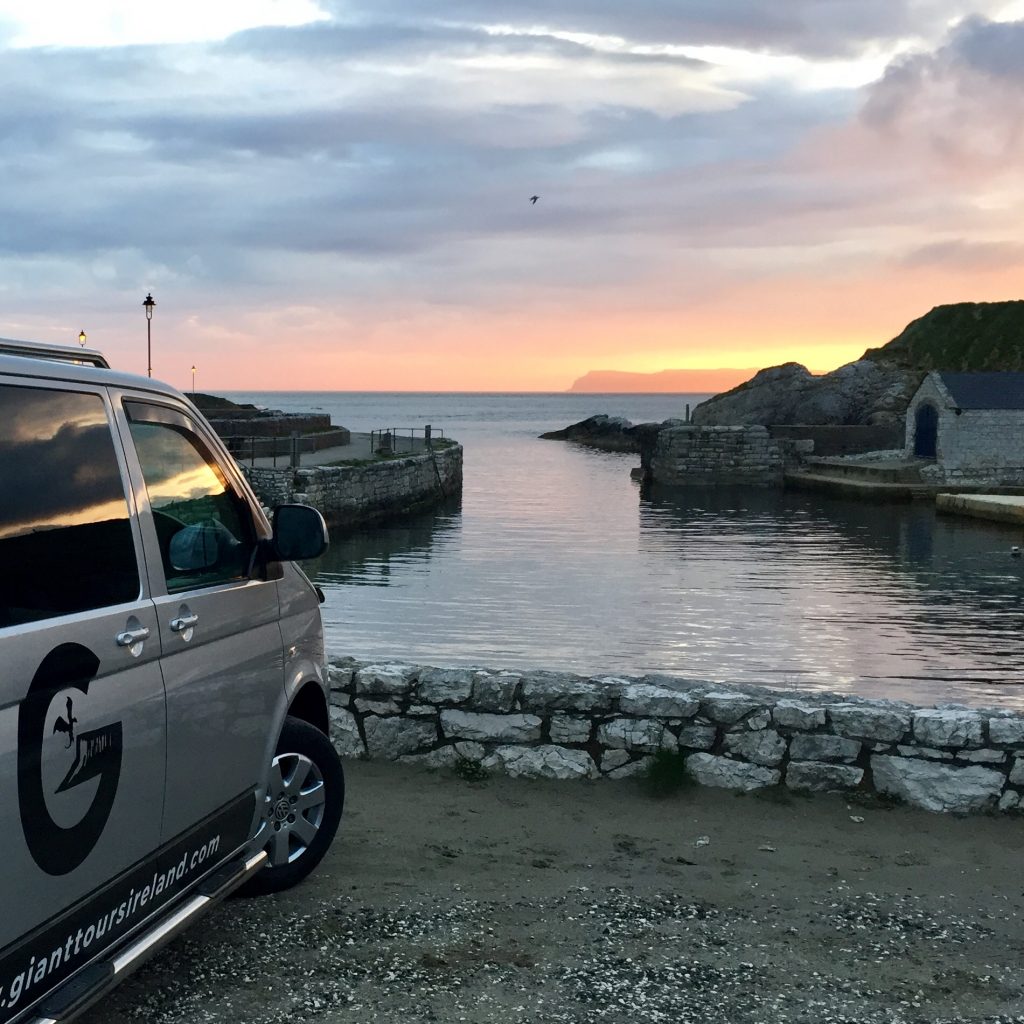 I managed to gather up the cash required for the business, the capital start up. Bought myself a really nice second-hand van, the best that I could find. I got that branded. Got a website put together. Launched myself. I purchased the van around Christmas time and started in April – that was my official start date. The initial idea was to call the company “Northern Exposure.” I had gone to school with this guy and he said: “You’ve always been the giant, you’ve always been our giant, so why not go with that?”. Ireland was added on at the end simply because a lot of Americans, Canadians and Australians are coming here, and they search for Ireland. 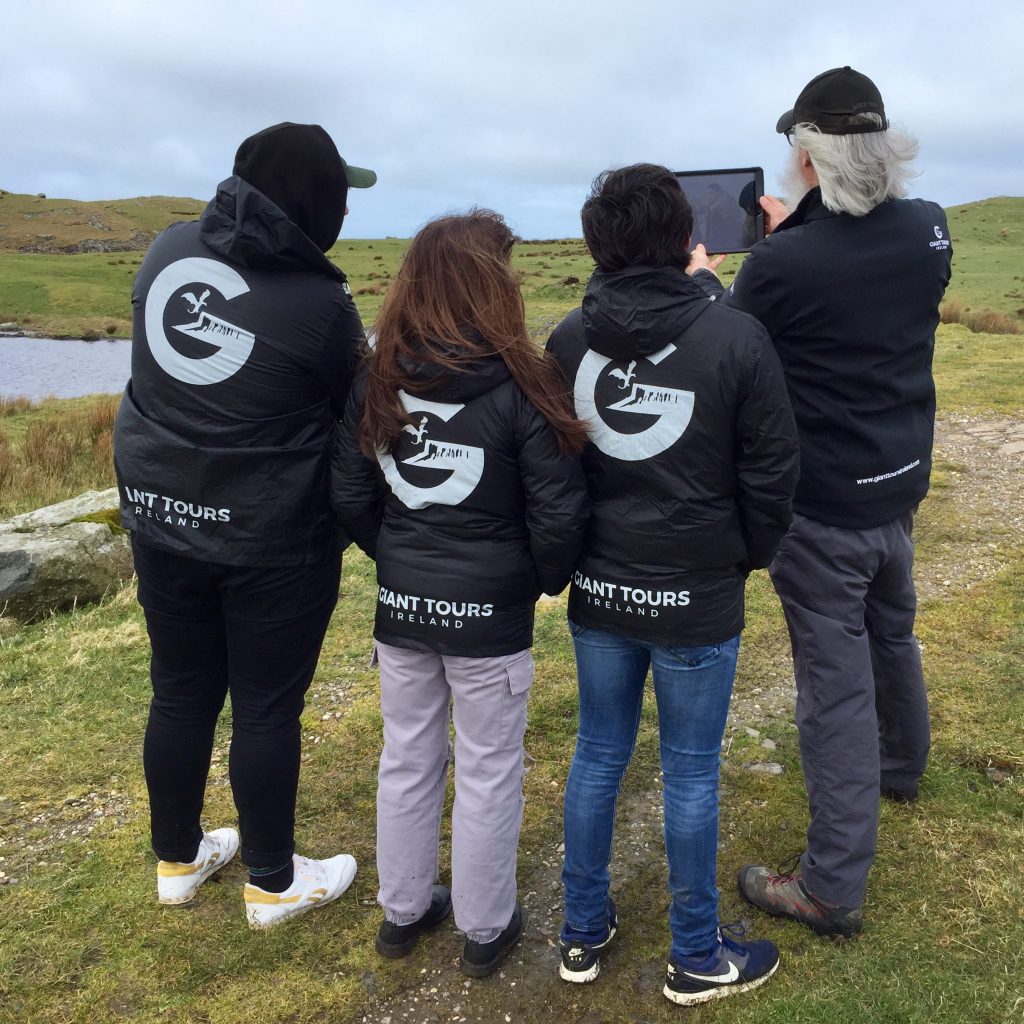 The Game of Thrones tours, they were just like a side-line. I was doing about eight different types of tours, one of which included an evening stroll at the Giant’s Causeway towards the sunset. I was offering photography days out, things like that. There were also Game of Thrones tours in there as well, but I maybe wasn’t confident that I knew the show well enough. Even though I was watching it inside out, I imagined everyone knew A Song of Ice and Fire better than I would. 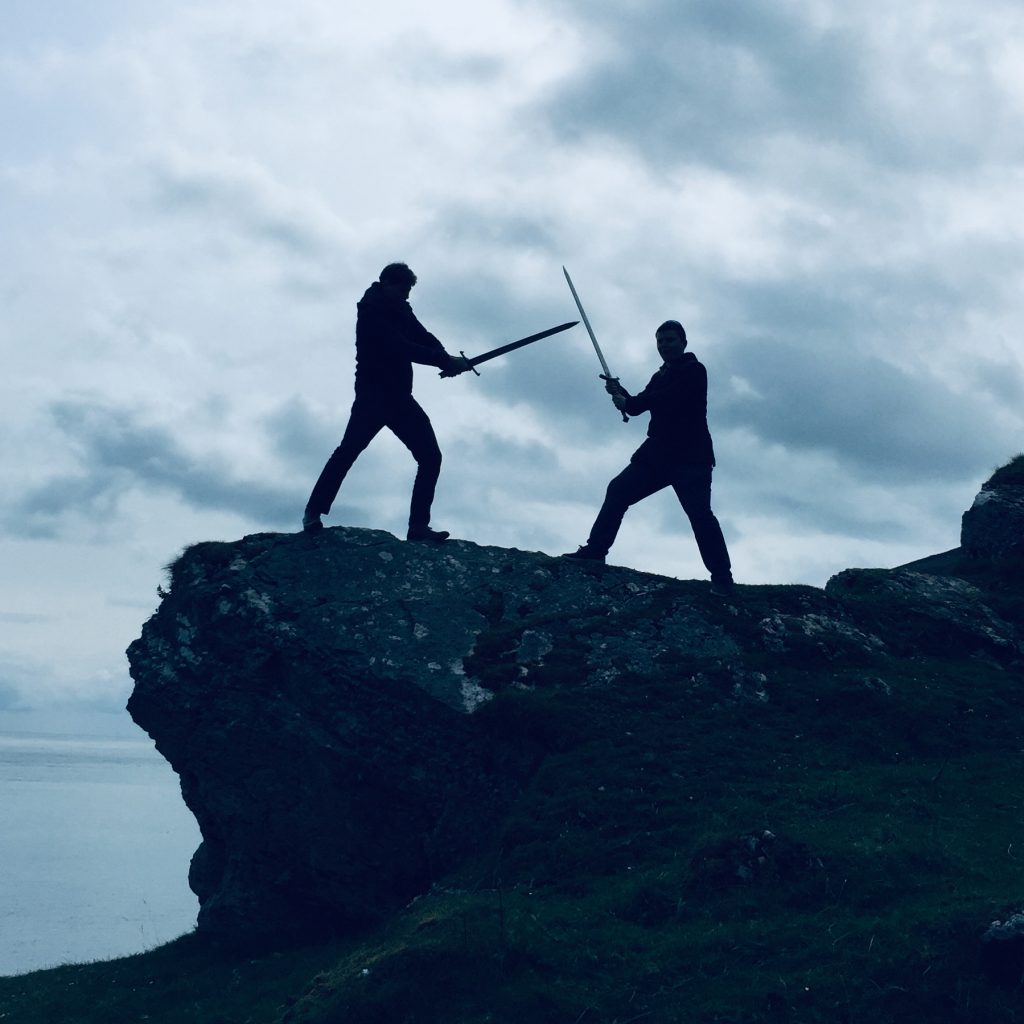 There was one day I went to a Tourism cluster group meeting at Whiteabbey. Tourism NI Media and TV Expert Nicole Stevenson did a presentation to other tourism providers, telling us: “Game of Thrones is huge – you gotta get onto this!” In a conversation afterwards, I told her I was a stand-in for Hodor and The Mountain. She immediately said: “You have to, you’ve got to, you must do Game of Thrones tours”. 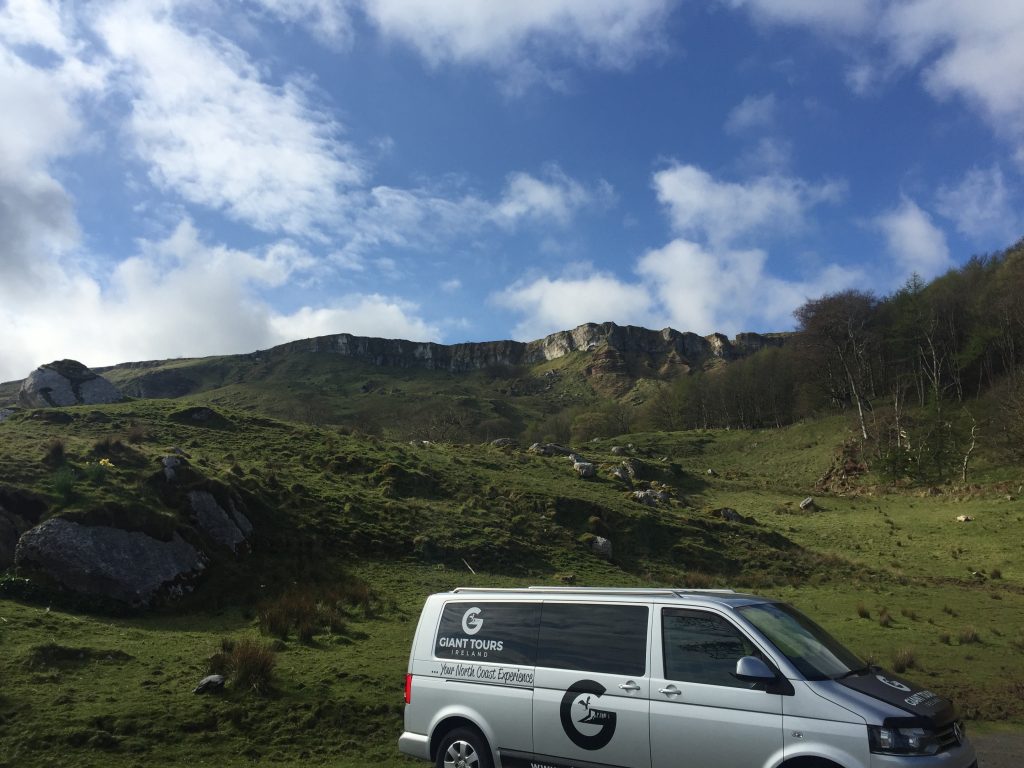 So, from that I got a brand new website. It kinda got a little bit darker and moody and a bit more Game of Thrones, and I pushed the Game of Thrones tour to the max. “Hanging out with Hodor” is one of the straplines with it. I tell a lot of back story around the show while we drive around. And because I have the smallish van, we are able to get off the beaten track and get to the locations that other tours don’t go to. 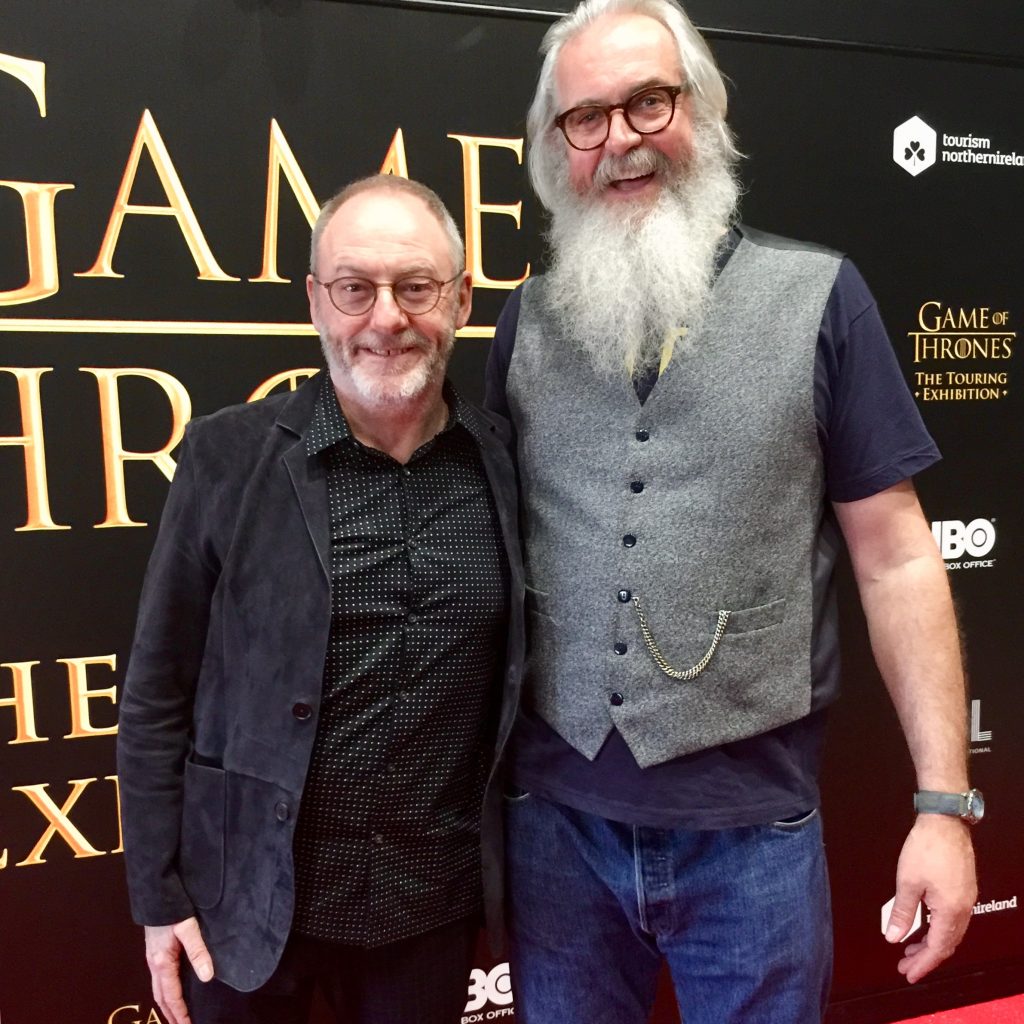 Are most of your customers from outside Northern Ireland?

Yep, predominantly Americans and Canadians, and I have had a few Australians. There are a few starting to come from England, Scotland and Wales, too. Really, it’s our landscape and the other people that we meet when we’re walking around as well. It just completely blows their minds to be honest. 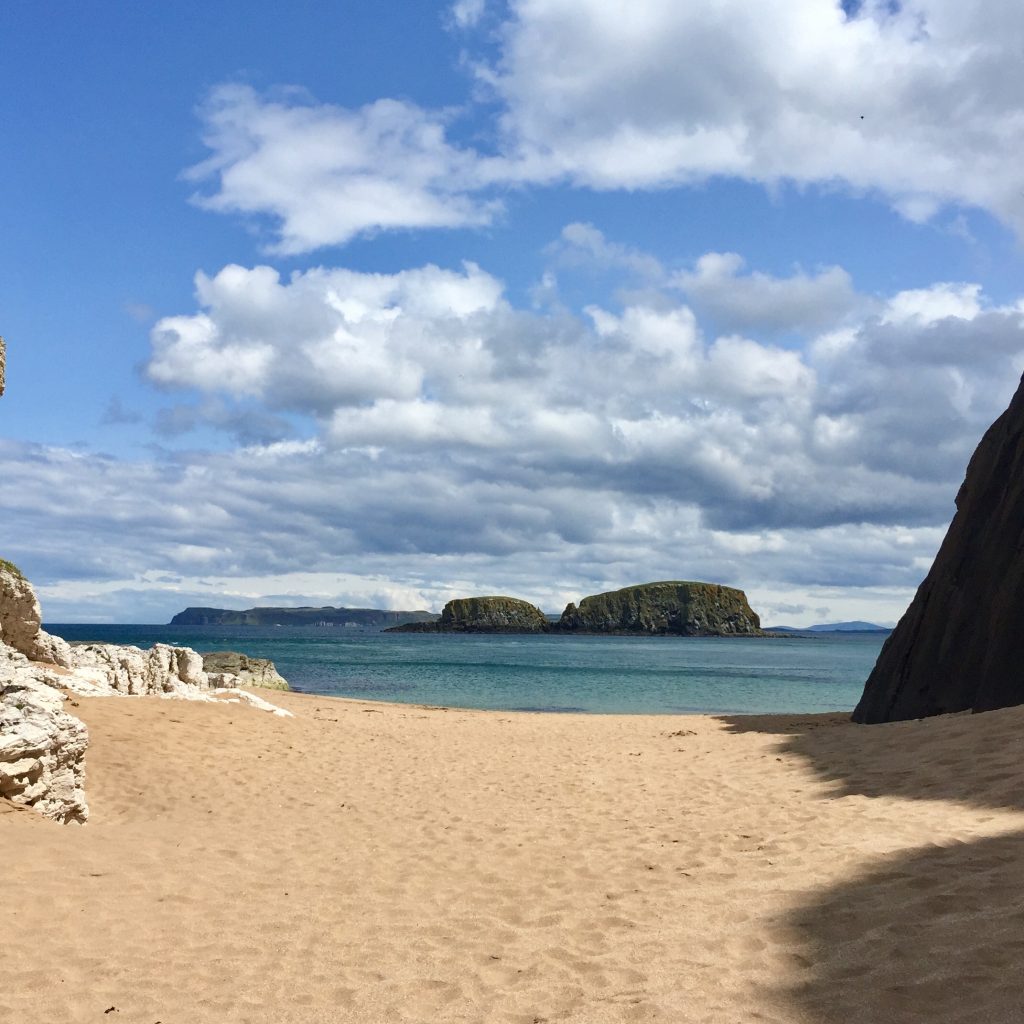 And what’s your favourite Game of Thrones location out of all of them?

I have to say for a Game of Thrones location its Slaver’s Bay, which is Murlough Bay. It’s absolutely stunning. It really is phenomenal. No matter what the weather is doing, it’s always amazing. If you are out for a walk, you can go to Fairhead and then walk down into Murlough. There’s some lovely way-marked trails, and McBride’s farm, up there as well, which is one of the other locations. 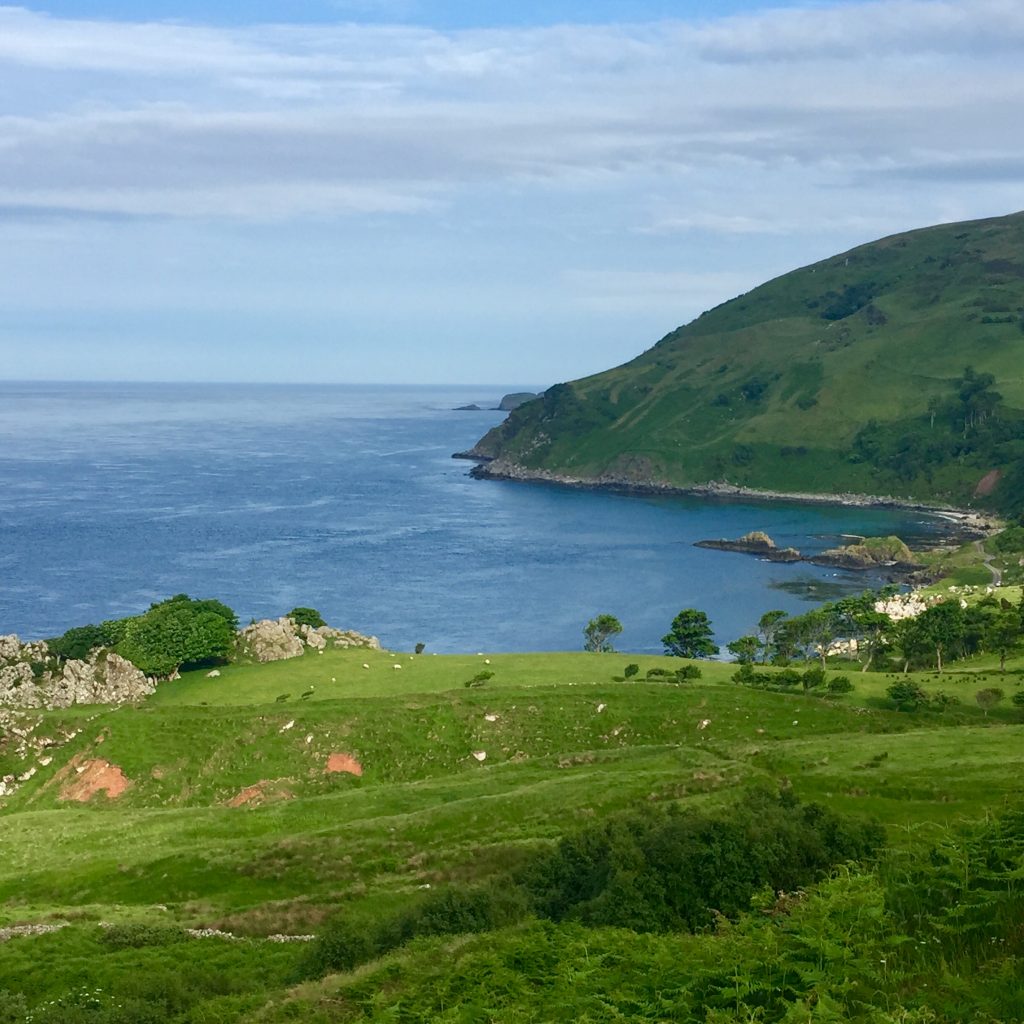 The exposed Fair Head is pretty impressive, it really is the height. You talk about going dragon-watching up there – that’s where Jon Snow and Daenerys and Drogon had a bit of a moment in Season 7. 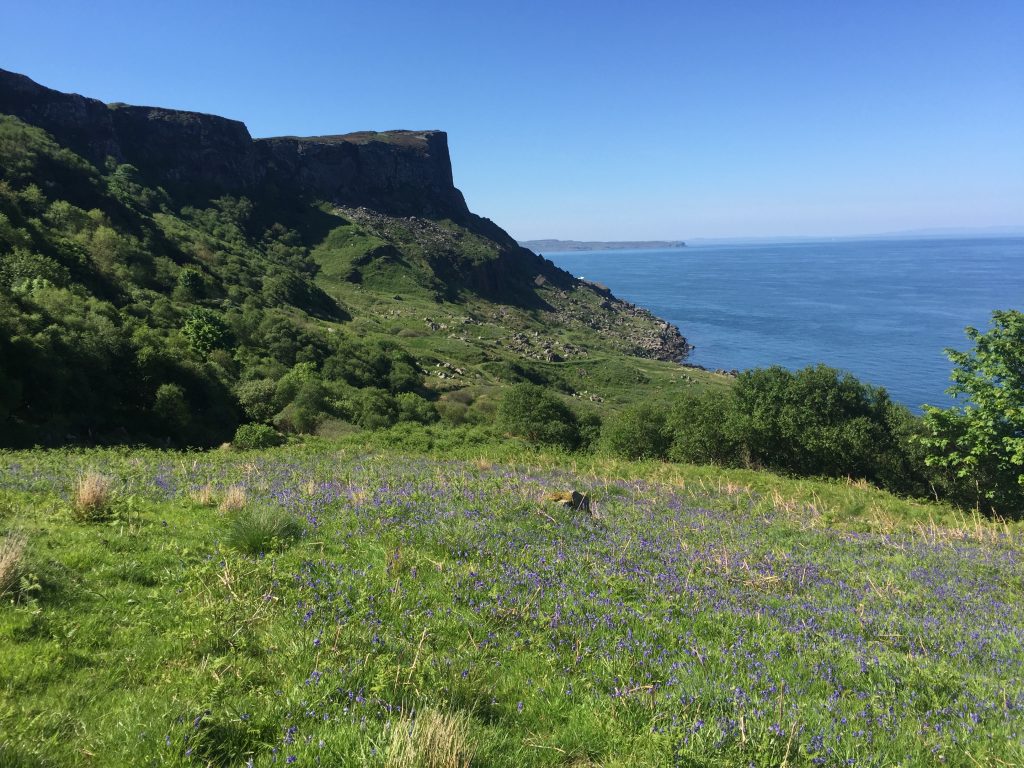 Also, Cushendun Caves. Those caves, 400 million years of age – amazing. I think before Game of Thrones there were maybe a few German geologist students who would come and have a look at it, and that tended to be it. It’s really put it on the map, as with everything. 31 million people per episode in Season 7. That’s how many watched every episode. We’ve had two years to wait for Season 8. So a lot of folks have been waiting for that and they’ve caught up. It’s unbelievable. 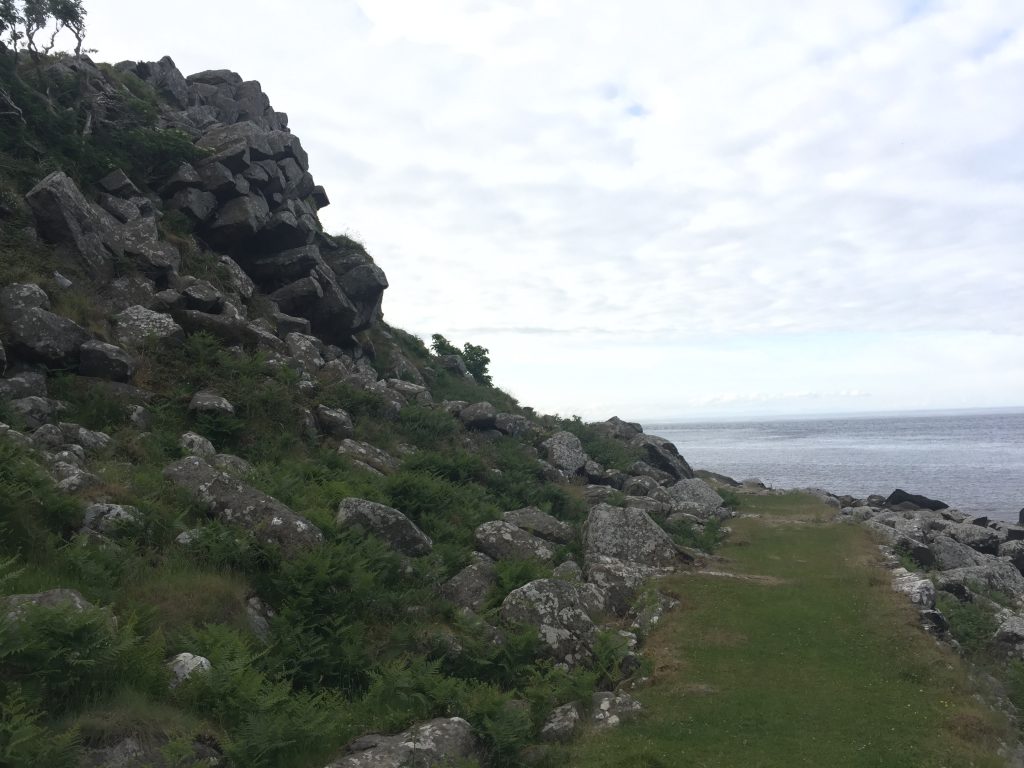 The first time I saw the Dark Hedges it really blew my mind. I can imagine what it must be like for tourists coming over…

Yeah exactly. The Dark Hedges has got extremely busy. I’ve been there last October with some bloggers who wanted “The Shot”. So we were there at 7am in the morning, just before a tour coach arrive – they start early! They really cannot get over what we’ve got on show. 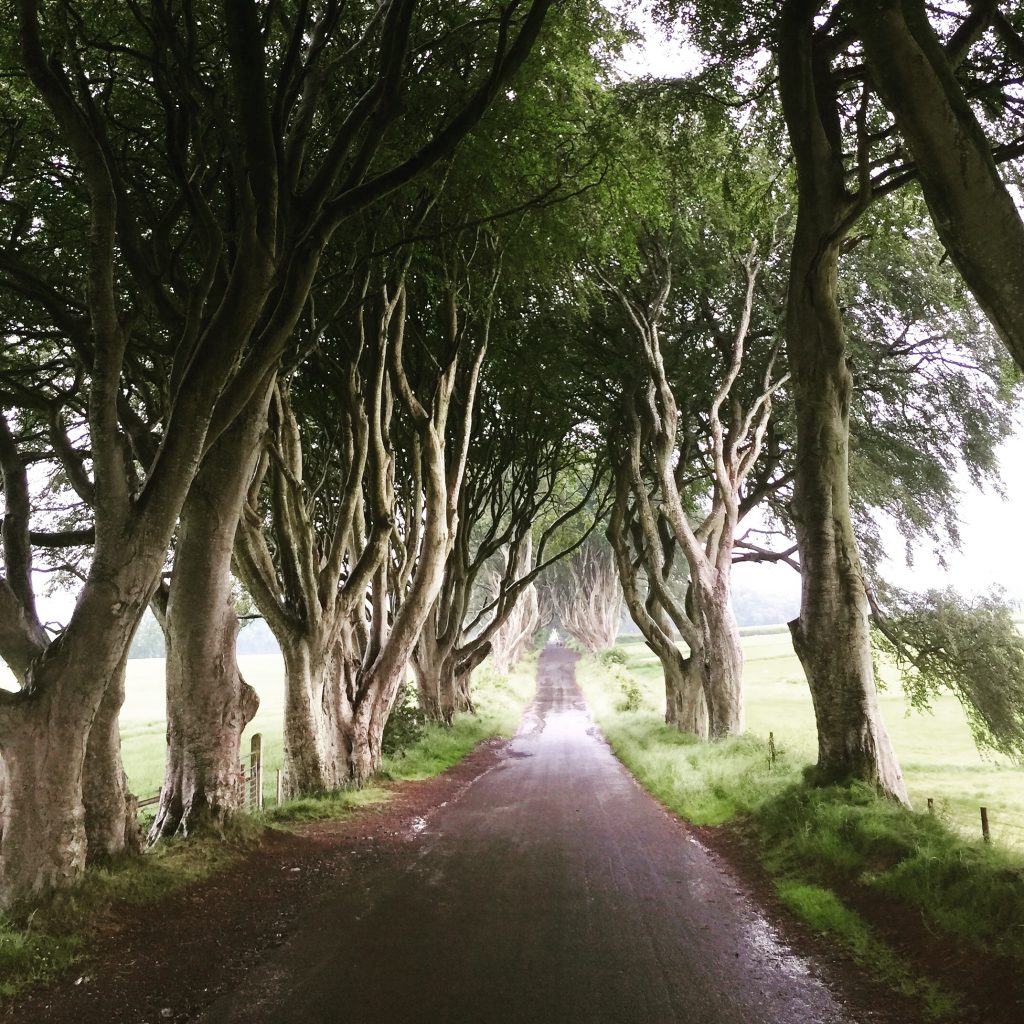 I think in 1994, National Geographic designated the Causeway Coastal route the best coastal drive in the world. I know a photographer, Peter Nash, who was working for the local Coleraine Chronicle back then and he couldn’t believe it. Well, they all couldn’t believe it. He was the one who had the courage to phone them up.

He rang up National Geographic in the States and said: “Surely you can’t be right. What about the Dalmatian Coast, etc?”. They said: “No, no, there are so many differences. Every bend and twist and turn has something else”. Of course when you think, from one end of it to the other, we’ve got the beaches on the Causeway coast, we’ve got the Glens you’re passing through – textbook examples of U-shaped valleys. And then you are so close to Scotland. On a clear day, it is second to none. 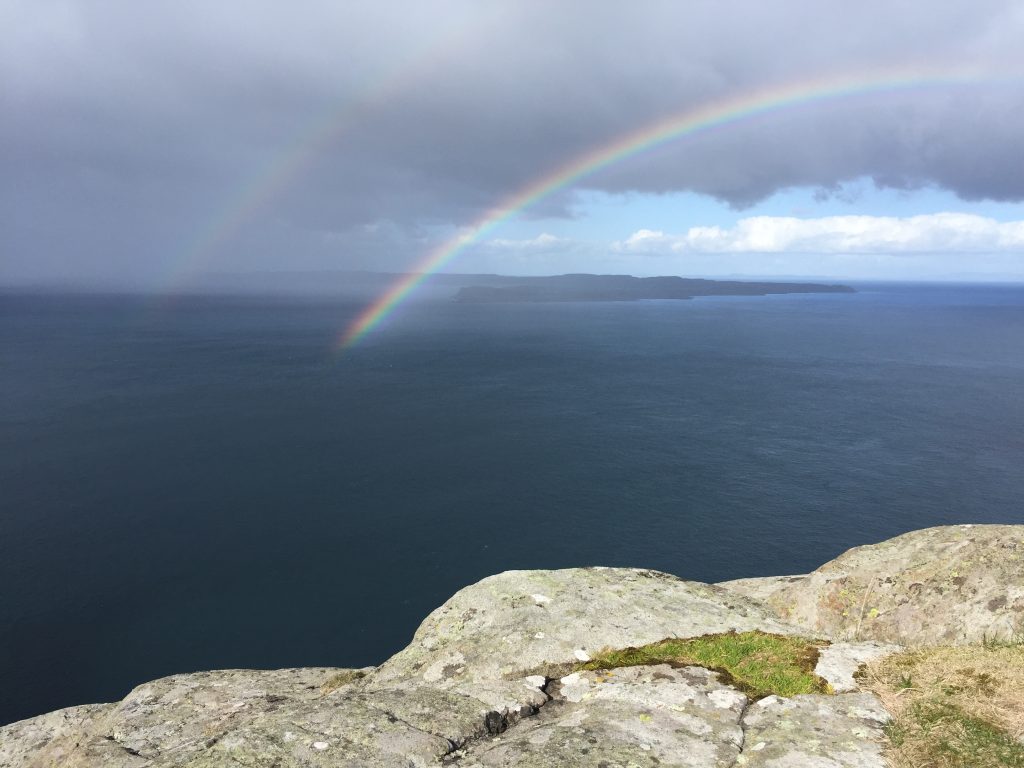 Finally, what do you think sets Northern Ireland apart as a major tourist destination?

The landscape of course. It’s so diverse – it really is. There was a young couple who took a tour last Saturday with me, and they also couldn’t get over how friendly everybody was. They really couldn’t. And everywhere we went, they were just blown away by everybody saying “Hello” and things like that. They went home shocked that that’s how we are in Northern Ireland. 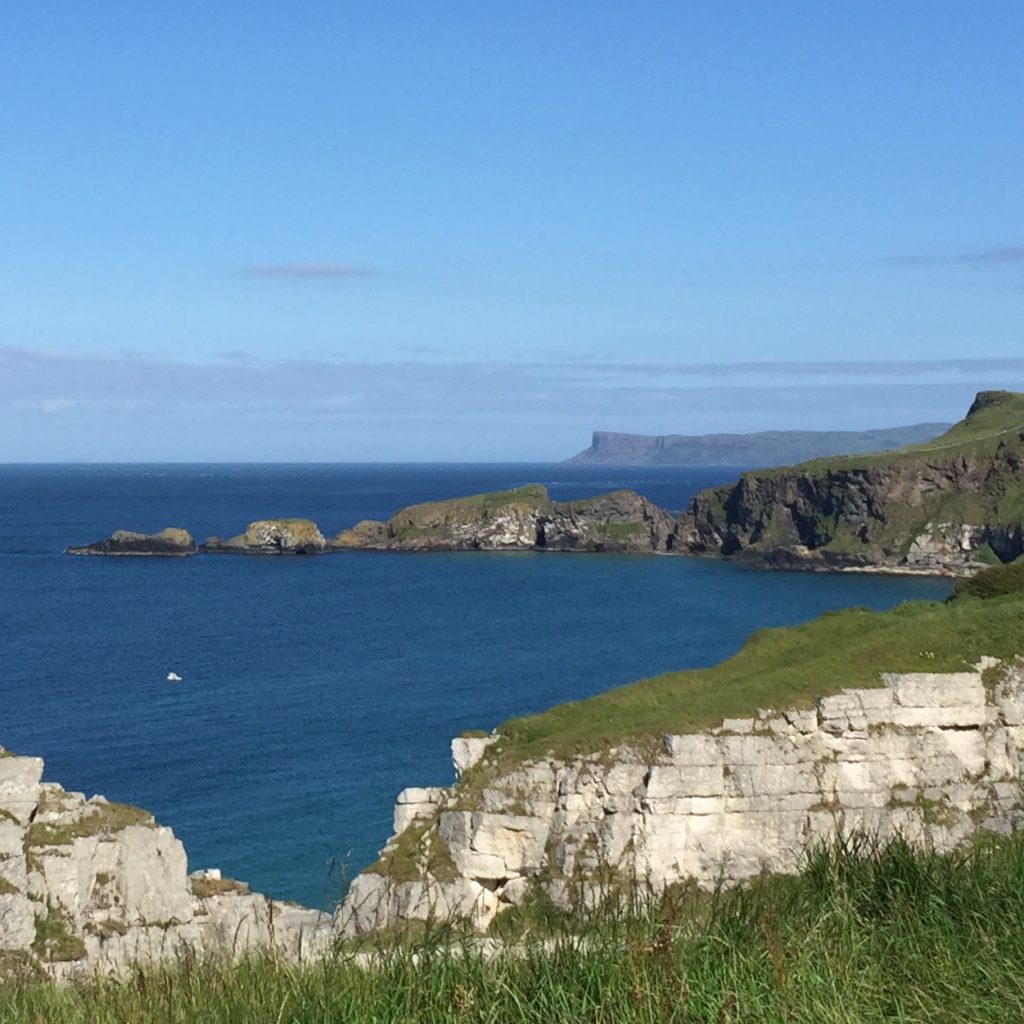