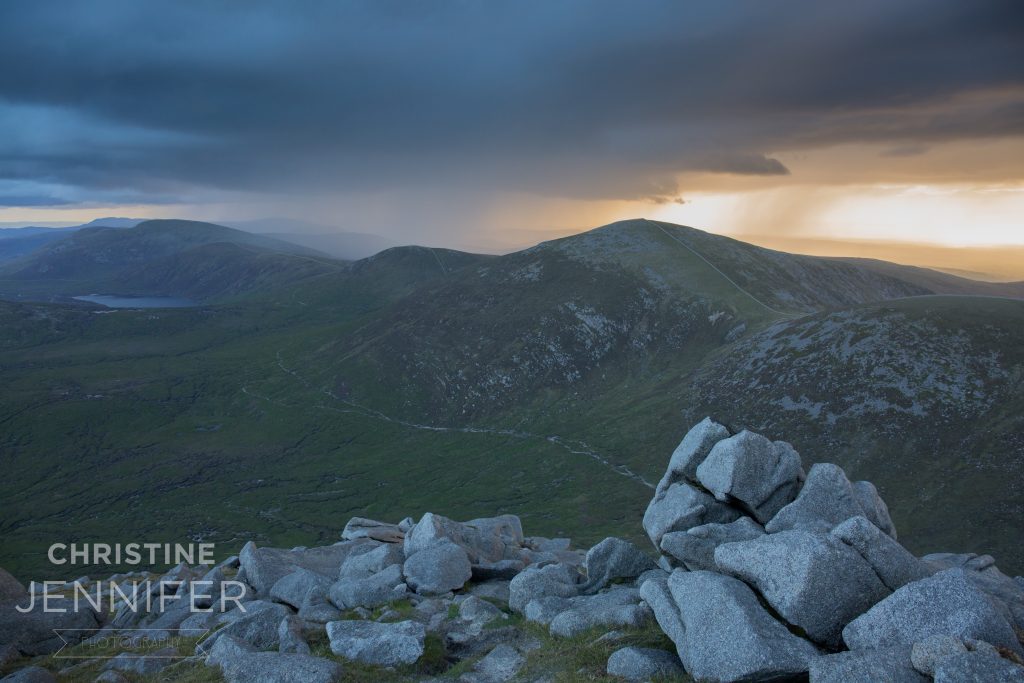 “You should really take a coat, it might rain.”

Famous last words, if ever there were some.

On Wednesday 8th August, Christine and I headed out to catch a sunset on Slieve Bearnagh. The weather was perfectly fine when we left the house (at least, I think it was – this happened OVER TWO WEEKS AGO and I can’t remember things that happened this morning) to make the relatively-short journey to Meelmore Lodge, where we like to start this particular walk from.

Little side-note: Meelmore Lodge is a great spot from which to enter the Mourne Mountains: it’s got a spacious camping ground, monitored car park, toilets, showers, and a nifty little bistro (yum).

Anyway, we set out from the car park at around 6:25pm, leaving ourselves plenty of time to reach the summit of Bearnagh before the sun set. A few campers were busying themselves with BBQs and one-versus-three football matches as we descended and then ascended the road towards the first of three stiles on this trek; we also passed a slightly haggard-looking group of [I assume] Duke of Edinburgh teenagers, some of whom smiled amicably as they passed us while others bore holes of exhaustion-induced murderous rage through their compatriots’ rucksacks for ever making them do this.

After crossing the stile onto the Ulster Way, we turned left and followed the wall along a well-worn path, crossing the Trassey River (two tributaries, I think) before starting up the winding, stony path towards Hare’s Gap.

The path meanders alongside the Trassey River on the right, beyond which the cliffs of Spellack loom impressively. At this point, Christine and I were in good spirits – the weather seemed perfect for bagging those great sunset shots Christine constantly craves as a photographer. Nothing could go wrong…

After about 30 or so minutes we arrived at the ‘Y’ junction on the Trassey Track. Going left takes you straight up a boulder field to Hare’s Gap, a saddle-like col between Slievenaglogh on the left and Bearnagh on the right – the Hare’s Gap stile should be clearly visible where it crosses the Mourne Wall. Taking the rightward path at this point leads you to another col between Bearnagh and Slieve Meelmore.

So off we went towards the Bearnagh-Meelmore col. This path steepens gradually, sweeping up past the quarry on Bearnagh’s north face. It takes noticeably longer to reach Bearnagh via the right path than by going straight to Hare’s Gap.

Actually, it seems to go on forever. And ever. And then some. I’ve made the return journey down that path a few times, but going up threw me a bit.

However, we eventually reached our second stile at the Bearnagh-Meelmore col, where we decided to stop for some tea and chocolate to boost our sugar levels. Climbing Bearnagh from this side is hard work – it’s very steep and stony, so steep in fact that the Mourne Wall actually disappears for a bit before reappearing to lead you straight to the summit. I’ve come down it a few times, but like the path, never gone up.

How hard could it be?

Well, the answer is: we still don’t know. After recharging, we started up Bearnagh from the steep side but quickly found ourselves pulled to the right following sheep trails around the mountain. I, in my naivety or arrogance (or both), thought the trail would start zig-zagging up the steep mountainside to the top, but of course we ended up traipsing around the side instead until, low and behold, we found ourselves gazing out over the marshy expanse stretching between Bearnagh, Doan and the back of Ben Crom.

Don’t get me wrong, that view is lovely. And it made accidentally going the wrong way worth it, for a while.

But after following an increasingly-less-clear sheep trail around Bearnagh, we started to get worried that we’d never actually reach the summit in time. The clock was ticking and the sun was setting fast; I could feel Christine’s capacity to patiently accept my obviously-wrong directions waning with each passing moment.

Bearnagh’s awe-inspiring southern tor rose majestically above us and we seemed to be getting closer. At last, some hope to cling to! Bearnagh has two incredible tors with its own little saddle in between, but the southern tor is particularly impressive. You’ll have seen photos of it, even if you’re not a keen mountaineer. It’s quite something.

Long story short, our sheep trail finally swung around the base of that beautiful big tor (a tor’s a formation of rock at the top of a mountain, in case you wondered why I kept saying it and not explaining what it was until now) and we were able to ascend up the last slope to the Bearnagh summit. This bit’s a killer by the way – it looks fairly gentle and you can actually see the top, but it takes longer than you think.

Anyway, we got ourselves to the Wall where it crossed between Bearnagh’s tors and I had a peek over the top in the direction of the setting sun.

The sun was dropping behind Meelmore and Slieve Meelbeg, and the light was magnificent. It was one of those ‘worth it’ moments that made us forget the unnecessarily-arduous climb. We drank it in for about 30 seconds before Christine whipped out her camera and started snapping.

I spotted some rain clouds moving in over Slieve Loughshannagh in the distance but, as I assured my darling wife, we had plenty of time before they reached us. They might not even come this far. Even when Lough Shannagh and then Meelbeg vanished in a grey haze of furious precipitation, I remained optimistic about our chances of escape. We had loads of time, right?

Just as Christine (fortunately) finishing packing up her camera equipment, the heavens opened and we found ourselves engulfed in a torrential downpour that would make a monsoon blush.

And, as alluded-to a few hundred words ago, I had no coat.

Suffice it to say, the journey from the summit of Bearnagh (the fourth tallest mountain in the Mournes at 739m) to Hare’s Gap was a wet one. The fun combination of steep, slippy ground, steamed-up spectacles and soaking clothes made our return journey a memorable one for me. Christine was a bit better off in her Trespass coat (mine was at home in our warm, dry house) but her displeasure was not subtle.

Still, she got this very nice snap of Hare’s Gap on the way down.

I should mention how to get down, shouldn’t I? There are essentially two ways: one can either follow the Wall straight down to Hare’s Gap (the steep route) or use one of several sheep trails to take a longer but much gentler way back down.

Ah those sheep trails. They’d never get you lost, would they?

Either way, the final part of the descent to Hare’s Gap is via a set of stone steps that will finish off your knees if they’re still intact at that stage. But the route’s clear, and before you know it you’ll be back at Hare’s Gap, with excellent views of the Trassey Track on one side and the Brandy Pad on the other. Take a moment to drink it all in when you’re there.

We descended the boulder field below Hare’s Gap as fast as was safely possible – the sun had long since set and the light was rapidly disappearing. By the time we reached the stony Trassey Track again, it was almost full dark.

But we didn’t care. We were soaked to the skin (the rain conveniently stopped shortly after we left the summit, but just long enough to ensure we couldn’t be bothered going back) and just wanted to get home. My handy-dandy Pathfinder head torch (highly recommended) became a necessity about 15 minutes from the car park, and the campers were all tuckered out around their portable stoves as we returned to Meelmore Lodge. The Duke of Ed teens had gone their separate ways and were no longer on speaking terms. We got back to the car at about 10:30pm, making it a 4-hour trek in total.

Bearnagh is one of my favourite mountains to climb. I’m always in awe of her fantastic summit tors and the amazing view afforded of the Mournes when you’re at the top. We very much enjoyed the walk, in spite of the changeable Northern Irish weather. And Christine got some great shots, naturally.

If you haven’t climbed Slieve Bearnagh, please give it a go. It’s not as hard as I’ve made it sound, and it’s totally worth it when you reach the summit.