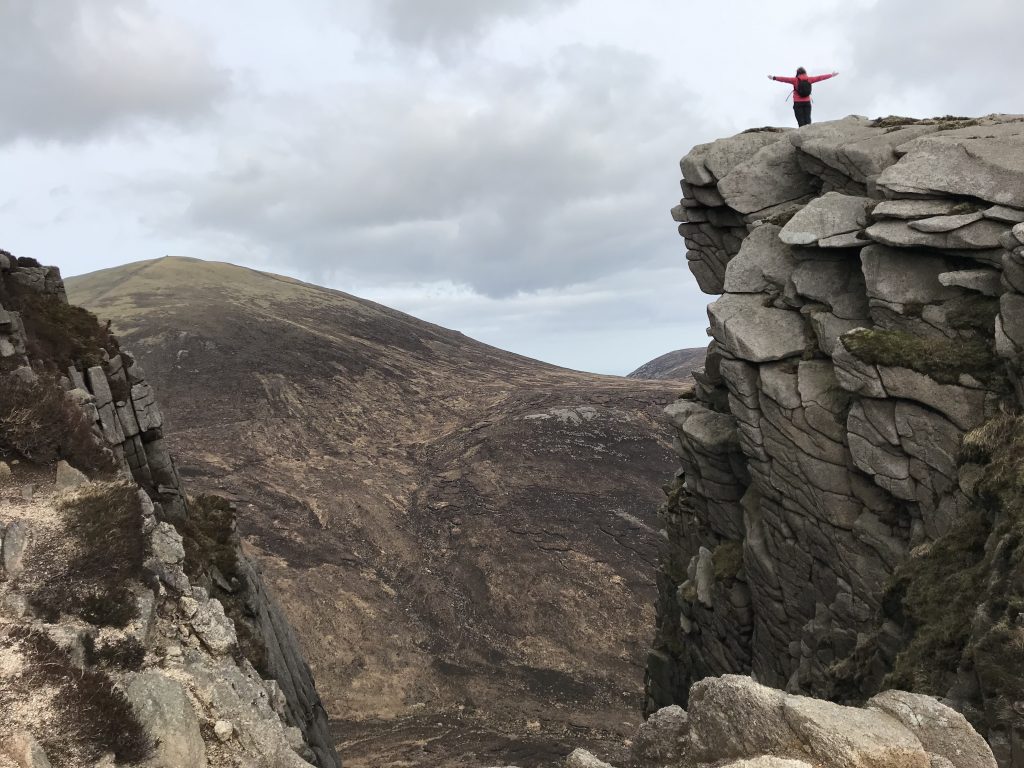 The Annalong Valley is one part of the Mournes I’d observed from various angles and heights but had never actually trekked until recently. I’d been eager to see the Devil’s Coach Road for some time (especially after reading the articles submitted by other hikers) and had a bit of a score to settle with Slieve Lamagan after making a misguided and decidedly-perilous descent from its summit last summer.

So Christine and I set off on a fine Saturday morning – the first dry one in a while – and headed for the mountains.

We left the car at the topmost parking area/campsite on Carrick Little (£3, but worth it to spare your legs from a bit of extra walking) and passed through the familiar gate onto the track we’d taken many times before to the Blue Lough. I’d forgotten to take photos at the start of this route, so the next couple are from previous treks.

We followed the track as usual towards the pointed bulk of Lamagan (not visible in these old photos), with the Mourne Wall climbing diagonally away from us on the left up the slope of Slieve Binnian, until we’d passed beyond Annalong wood on the right.

After a short time we came to a fork in the road and went right, heading up the Annalong Valley. There are a few paths diverging to the right off the main track but it’s easiest to take the first one here.

The new track crosses a stream, which I imagine would be more of a river on wetter days.

Carrying on, we could see Rocky Mountain and Hare’s Castle on the right, with Slieve Donard beyond.

Lamagan continued to rise and extend on our left as the oddly-shaped Slieve Cove became more visible further ahead. We could see Cove Cave from quite a distance away.

The path sloped down and then upwards on a gentle gradient towards the cave (can you see it?).

I have a weird fear of caves (no idea why), so I was happy to stay a good distance away from Cove at this point. It’s an interesting-looking mountain, although what you see in this picture is really the edge of a sort of plateau below the more rounded summit. There were a few climbers scaling the flat rock-face that morning – they’re just about visible on the left of the photo below, standing on top of the cliff.

We had a brief water break here and looked back on our route so far. Binnian dominates the view impressively.

Carrying on around the base of Cove, we followed a well-trodden path up the Annalong Valley until Slieve Beg appeared ahead of us, with Slieve Commedagh and Donard beyond. The Devil’s Coach Road can be seen slicing through the top of Beg, with the pale scree trail arrowing down from the summit.

The path partially disappears here, so we decided to stop for lunch and look back on our route. It was at this point that I realised I hadn’t put milk in the tea…..disaster!

With our bellies full, we chose to climb up the col between Cove and Beg rather than carry on around the base of Beg. This was the most difficult part of the trek that day, and I don’t know if I’d advise doing it – lots of clambering on all four through rough heather up a steep slope that feels endless. Still, the views were good. We stopped a few times to catch our breath and watch another hiker make his way towards the base of the Devil’s Coach Road – a braver man than I.

As we neared the summit of Beg, the never-ending heather gave way to interesting rock formations, almost like mini versions of the tors on Binnian or Bearnagh. Christine wanted to climb straight over it, but I politely declined.

Upon reaching the top of the col, we could see the path leading up Cove on our left. We found what we at first thought was the Devil’s Coach Road, and it didn’t seem overly impressive. Then we worked out that the angle was wrong, and we were clearly looking down a different gulley. So we headed further up towards the summit until we came upon…

I have a mild fear of heights (to go along with the caves thing, naturally) and couldn’t go near the edge of the Coachroad for more than a few seconds at a time. It’s truly breathtaking and pretty terrifying if you aren’t comfortable with heights. I may have had a panic-stricken moment near the cliff edge and lost a few Man Points, but Christine wasn’t to be deterred from getting the classic Devil’s Coachroad shot. The hiker we spotted at the base of the mountain beat us to the summit by climbing straight up the scree trail.

I probably won’t be in a hurry to visit the Devil’s Coach Road again, but I’m glad I’ve seen it in real life – it’s a pretty unique part of the Mournes.

We headed down from the summit of Beg to where a stream cuts between the two mountains and started up Cove. The path here is clear but rocky, and we felt the burn in our legs after several hours of hiking by this point.

It didn’t take long to reach the summit of Cove, however, and we had a great view of the looming bulks of Commedagh and Donard, with the Coach Road still visible below. We could even see Slieve Croob in the far distance beyond the top of Slieve Corragh.

The path down Cove and up Lamagan is straightforward enough at first, but the further you ascend Lamagan, the more rocky it becomes, and the path quickly disappeared.

Still, we persevered, and finally reached our final summit of the day – one of the best 360-degree panoramas in the Mournes (on a less-cloudy day, anyway).

Lamagan boasts a spectacular view over Ben Crom reservoir and the sheer face of the mountain itself, with Slieve Doan just beyond it. In the distance, you can see Slieves Muck, Carn, Loughshannagh and Meelbeg, with Slieve Bearnagh dominating the view further across (not visible in this photo).

The route down the other side of Lamagan is hazardous enough. Again, there is no actual path at this point, but you can see exactly where you need to go. Just head for the crossroads on the Binnian-Lamagan col. Great views of the reservoir on the way down.

Once we reached the col, we had a quick break and then headed back towards our starting point, passing the Blue Lough and then Percy Bysshe on the left. The only real negative aspect of the whole trek that day was when the sky suddenly burst into colour behind us, and we realised we’d missed a great opportunity to get a shot from the summit of Lamagan. The sky had been white and the sun clouded over when we were up the mountain, and it was frustrating when it abruptly changed not long after we’d reached the final phase of our route. Oh well, we’ll get that shot another day.

We returned to the car park via the same track, enjoying the stillness and silence of the route that was by now devoid of other hikers, apart from one courageous man who was heading up Binnian just as darkness was falling.

In all, this was an excellent hike. It took exactly six hours in total, though we’re not sure how many miles we covered (but it felt like a decent distance). I’d recommend it to anyone who feels competent enough in the mountains, but you do need a good level of fitness for certain parts. Be careful around the Devil’s Coach Road and watch your footing on the Lamagan descent in particular.