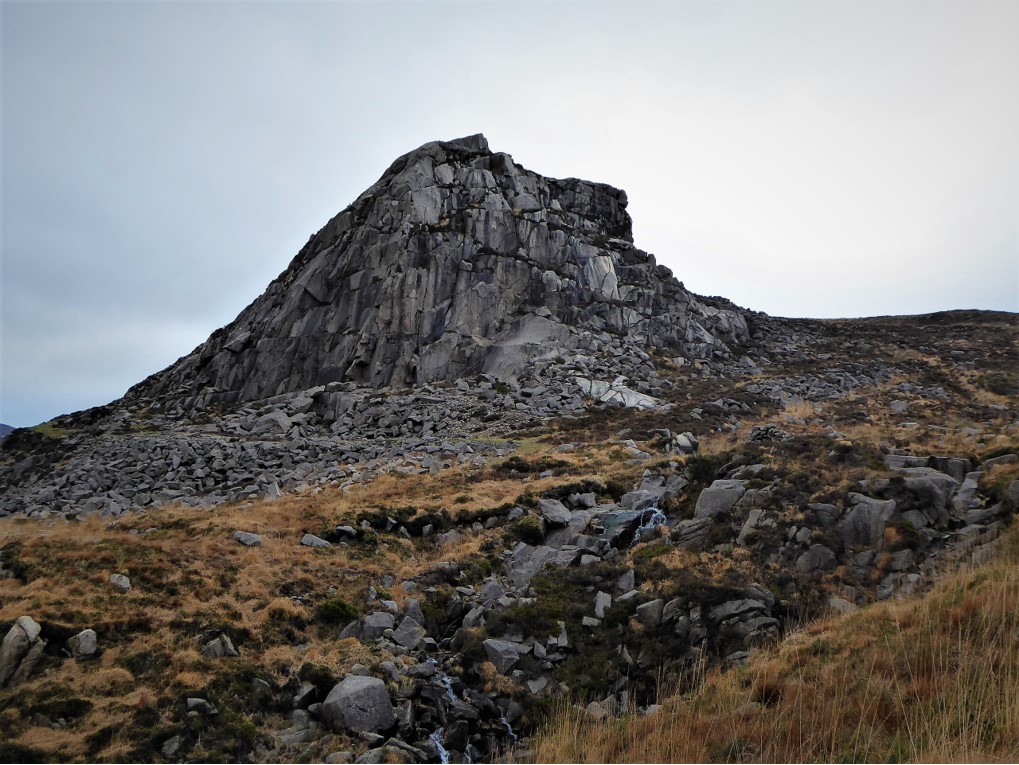 At 430 metres, what Hare’s Castle lacks in stature is redeemed by its considerable charm. I have a particular soft spot for this little granite tor as it served as my introduction to hiking in the Mournes. Eager to dip a toe into some serious hillwalking, I had asked a hiker friend for advice on where to start. He recommended Hare’s Castle as the ideal taster on the basis that, although quite challenging, it was not overly demanding.

He was spot-on and what he didn’t tell me was that the views from Hare’s Castle are spectacular. So, if you’re thinking that you might enjoy a trek into the Mournes, but aren’t sure you could cope with the slog up Donard or the dizzying gradients of Bearnagh, Hare’s Castle is a great option for a test drive. The round trip is about 10km and should take roughly 3½ hours. Incidentally, its name is thought to derive from its resemblance to a hare when viewed from the west, but I suspect it was christened before the stone-men got to work. The route described is one of several alternative approaches, but is probably the most straightforward for the beginner.

Starting at the Water Service gates on Head Road, walk the 2.8km to the end of the forest road and veer right to reach a metal field gate. To the left of the gate, follow the track up the bank of the Annalong River. Cross a stile after about 500m…

…and enjoy the views of Slieves Binnian, Lamagan, Cove and Beg on the left and Rocky Mountain on your right.

Keep going until the faint path takes you up the steep bank of the river valley and heads for the Hare. Keep on the path to the right of the Castle and left of the stream.

On reaching Hare’s Castle, pass by its rocky southern slopes and keep on the path that veers left before turning left again, passing behind the eastern slopes and clambering up the peaty terrain until you reach an area on the northern side of the peak which offers a superb view of the Annalong Valley (and an ideal picnic spot). On your left, you should see a shallow grooved channel along the rocks which leads to the surprisingly flat summit.

Negotiating the short hop to the top is a little daunting because of the steep drop down to the valley, but the views are first class.

The return journey follows the route in reverse.

By now, you should know whether the Mournes will become an integral part of your leisure time. Hopefully, the answer will be a resounding Yes.

By car via A24 and A2, turning right about a mile on the Newcastle side of Annalong up Quarter Road and onto Head Rd to the Water Service entrance gates. A bus service operates between Newcastle and Kilkeel. If using the bus service, you’ll need to add 4km to the trip to allow for the walk to Head Road and back. Check out http://www.translink.co.uk

…you’re tempted to get into the mountains, but haven’t tried it before. It would also be suitable for youth groups or school parties. This is a fairly challenging, but easily managed trek which encompasses many of the ground conditions you can expect on longer, tougher hikes. It also offers excellent views of the Annalong Valley and several of the big peaks. It’s a walk that can be undertaken if the higher summits are obscured by poor weather conditions. Even if you haven’t fully mastered the navigational arts, a map and compass are pretty much essential. Stout footwear and sound wet weather gear is also a must given the unpredictability of Mourne weather and terrain.