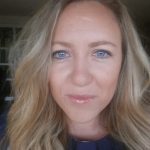 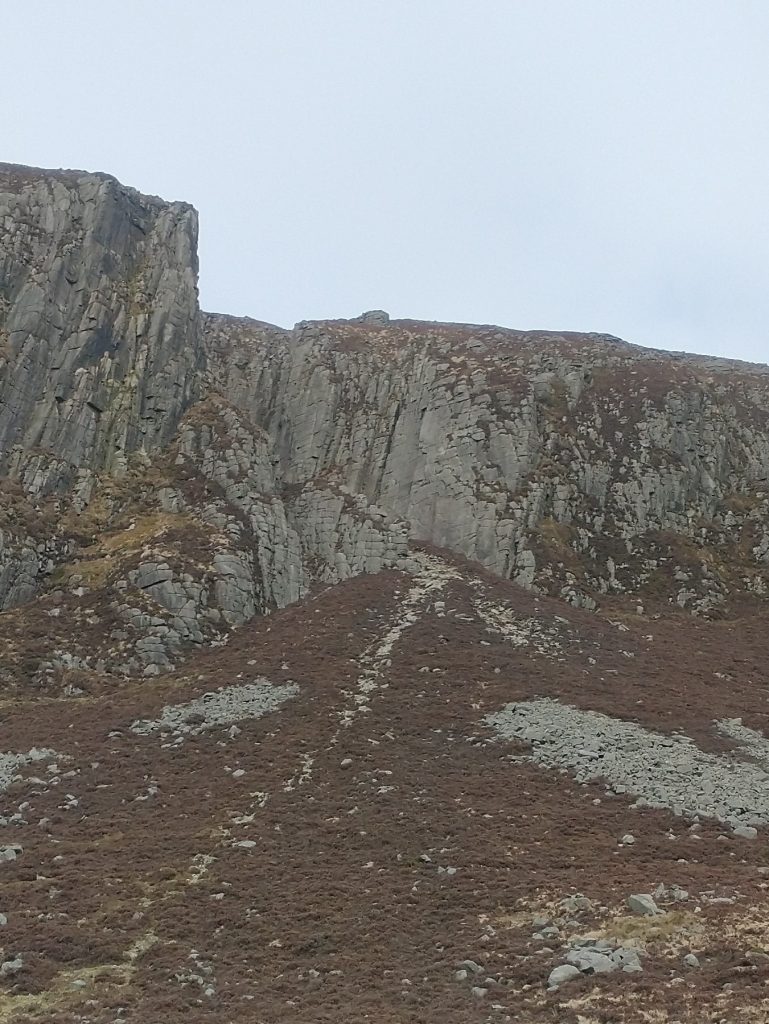 Having been introduced to the Devil’s Coach Road via a fellow hiker whom I had met on an outing, I was automatically curious to explore such a unique place within the Mournes. The Devil’s Coach Road can be found at Slieve Beg, a pathway through a gully between towering flanks and scree under foot. Locals believed that the Devil would rise from the path and create havoc on the world, leading to its name. Intrigued, I did some research and planned the trek. 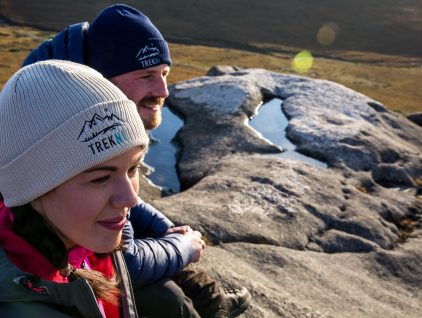 Free parking is getting harder to come by at Carrick Little, but there are plenty of spots where you can park for a small fee in a local’s field or front yard. Having found a spot overlooking Carrick Café, I headed up the lane, stopping through the red gates to take in the sights of the Mournes expanding ahead of me, a view I am familiar with, but have learnt to appreciate immensely. With Slieve Binnian to my left, Slieve Lamagan ahead and the destination for the day hanging above Annalong Wood slightly to the right, I set off on the path heading straight until it began to branch off after Annalong Wood.

I followed the first path on the right, leaving Slieve Lamagan on my left and Cove Mountain up ahead. Underfoot changes from gravel to grassy path, with a few rocks to navigate around and small streams to cross. The temptation is powerful to veer off course and explore Cove Caves but that will be the plan for another day. With Cove still on the left-hand side, Slieve Commedagh and Slieve Donard are ahead, with Slieve Beg in the foreground.

It is only when I reached the base of Slieve Beg and stared at the scree path that looks like an almost vertical climb, I began to question if it was safe or even sane to do so. I am a solo walker; I like exploring on my own and like the time out from reality. But at this stage, I really questioned whether I should do it.

While I pondered this, psyching myself up and planning a route, two men approached and stopped for a chat/rest. At this point, we are roughly 4 miles from the car park and it is the first time I have spotted anyone since the base of Binnian, allowing me to share my concerns. With polite laughter they advised me to stick to the left-hand side once I reached the top, and try not to walk behind anyone as rocks could fall. Likewise, be aware of walkers behind me if the scree does move.

They didn’t stop for long and soon were scrambling up the scree. I waited about another 5 minutes to allow them to get far enough ahead should any rocks fall down on me and set off, a little apprehensive.

I would classify the next part of the climb as two different parts. The first is a roughly 150m climb over the space of a 35 degree gradient (according to a fitness app that I am using). This was tough as the scree moves easily underfoot the closer you get to the end of this section. Luckily, no-one was behind me as several smaller rocks became dislodged as I passed.

When I got to the top of this section, the Devil’s Coach Road lay in all its glory before me. The granite tors dwarfed me on either side of the path, with rocks, boulders and scree creating an obstacle course ahead. As I carved out a path to follow, the two men who were ahead were approaching the top, while other walkers were beginning the climb.

The next section was a roughly 100m climb at a 40 degree gradient. With boulders either side and loose gravel under foot, it isn’t long before I resorted to using my hands and knees to steady myself and continued the climb. I started off on the right, but crossed over to the left-hand side about halfway. At this point I could see two paths either side of an outcrop of rock. I stuck to the left where I could see the finish.

The final 5 metres might were the toughest part of the climb. The path curved between two rock faces and got narrower. To get up to the top of the path, I needed to reach up and shimmy myself upwards as my feet couldn’t reach the ground where the rock face narrowed. As a result, I looked and felt like Spider-man climbing between two walls. With one push, I managed to pull myself upwards and climb out from between the two rocks.

The view looking down over the Devil’s Coach Road could leave you with vertigo as it looks so steep, but having achieved the climb is so satisfying. Turning around gives you the best view over the Brandy Pad, Slieve Bearnagh, Hares Gap and up Lamagan.

This trek is not for the faint-hearted or the unexperienced climber. It is a challenge, and while I knew I was fit, I did struggle with the rock climbing at the end (I’m also 5’ 7’’ and was probably too short). It is a rewarding hike, but only for those with experience and with the proper equipment. I would highly recommend walking poles and sturdy boots. I normally walk alone but I would recommend having someone with you on this journey, even just for the boost up at the end. 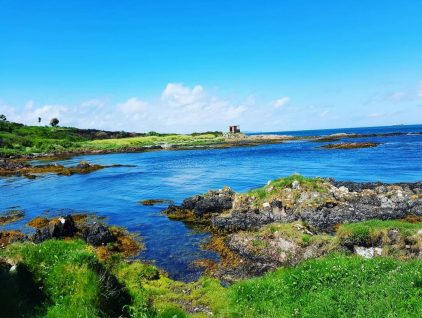 One of the best parts of this trip is your path home. There are plenty of options here to continue up Lamagan, or head down the side of Slieve Beg, or continue to Hares Gap, or over to the saddle at Commedagh and Donard. Make sure to leave plenty of time for your return home and pack enough water and sunscreen as you will need it (although the weather changed constantly while I was out).

I ended the trek with a much-needed massage at Mourne Massage to rub all the aches and pains away, having accomplished my morning on the Devil’s Coach Road.

Just a girl who loves to escape into the mountains and explore nature on our doorstep. I have did some amazing treks throughout the world but nothing beats the views at home.