A Looped Walk in the Dromara Hills 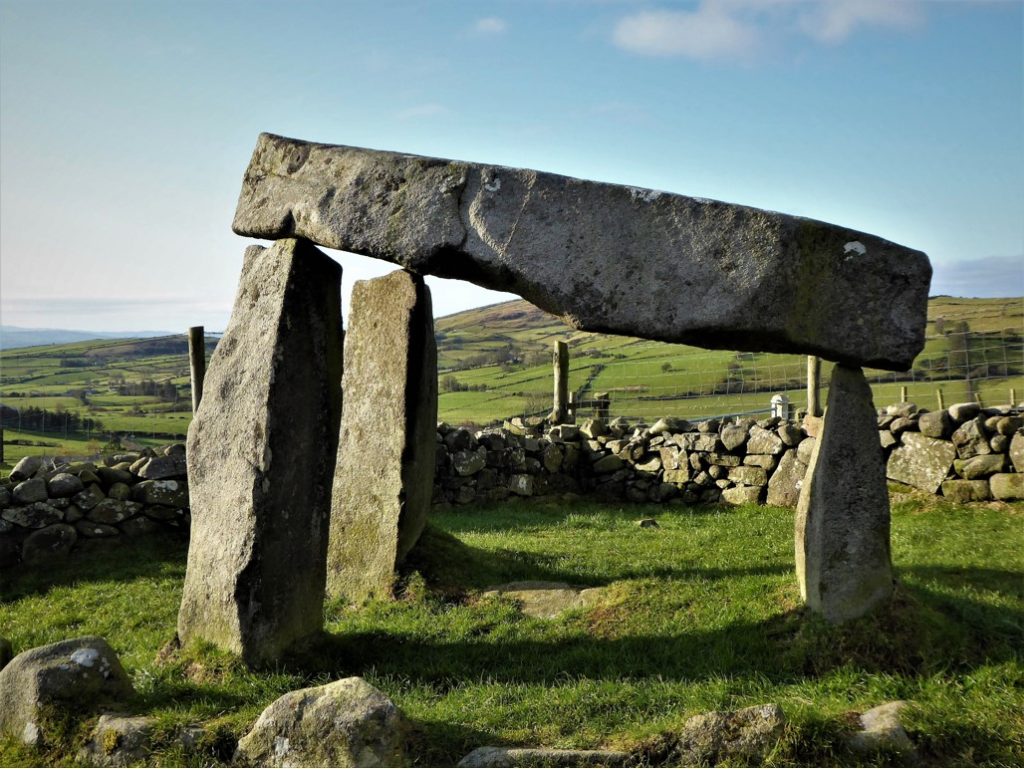 After two days of grungy weather, Friday 8 November arrived with clear skies, no wind and crisp, clear, cold air – just the day for a bracing walk. Family responsibilities necessitated a return home to Ballynahinch by mid-afternoon so after discussing a few destination options, my wife and I plumped for the Dromara Hills, as the area is close to home as well as scoring high on our list of favourite walking spots.

With Windy Gap as our starting point, we set off, map and compass in hand, for a looped walk taking in Legananny Dolmen and a standing stone marked on the Mourne Activity map, but which we had never seen.

Leaving the car park, we turned left for 150m before taking a right turn at the Footpath sign. The downhill walk on the Windy Gap pad was very muddy in parts after the previous night’s rain.

One and a half kilometres later we arrived at Legananny Road, turned right and strolled along in traffic-free tranquillity enjoying the glorious winter sunshine and the enchanting views of the surrounding hills.

After 1.2km we reached Dolmen Road on our left…

…and 150m further we arrived at the lane leading to the imposing, mysterious dolmen. The 4000- to 5000-year-old structure’s prominent setting affords extensive views of Cratlieve to the north-east and the Mournes to the south.  Its impressive capstone is over 3 metres long and its frontal supporting stones, over 2 metres, making it one of the most photogenic monuments in the country.

READ: Camping in the High Mournes

The track to the dolmen runs on northwards past a couple of abandoned homesteads, a frequent feature of this beautiful, but inhospitable, landscape whose people must have struggled to eke out a decent living.

We had to turn back towards the dolmen when faced with a line of cattle on their way to pastures new. We had a quick chat with the farmer, who told us that had we been able to carry on up the track we would have found our way onto Cratlieve, one of the higher of the Dromara Hills at 429m, with the option of crossing over the summit to meet Finnis Road and return via Kilnhill Road to the dolmen – definitely a walk for the future, livestock permitting.

After returning past the dolmen we continued on Dolmen Road enjoying the desolate beauty of the landscape.

As we neared the end of Dolmen Road we kept our eyes peeled for the standing stone. It would have been very easy to miss, but we spotted it eventually after first dismissing it as someone walking or working in a field. It stood about 200m to the right of the road and looked to be about the size and shape of a smallish person.

Making our way through a gate and over the fields, we reached the stone (Grid Ref J304427) which seemed to be partly surrounded by a broken circle of rocks. Considering that it is thought to have been around for at least a thousand years, it was in good condition with its inscribed cross still clearly visible.

We made our way back to Dolmen Road, turned right and, after a few metres, turned right again onto Kilnhill Road. We walked downhill, reaching a crossroads after about 300m where a right turn took us onto Legananny Hall Road.

The drop in altitude was reflected in the scenery which became a little less desolate with more greenery and fewer rocky outcrops, contrasting with the rearward view of Slievegarran to the east.

We walked straight on for 2.6km until we reached the junction with Slievenaboley Road where we turned right and began the very steep return to Windy Gap. That last kilometre was the toughest part of the walk and the only section where we met some light traffic, but the panoramic views at our destination were well worth the effort.

…You enjoy a quiet walk where the only people you’re likely to meet are the locals. The Dromara Hills are something of a hidden gem and, from a tourism point of view, are almost completely undeveloped, so if you fancy an alternative walk, you’ll need to devise it using the map – there is no shortage of possibilities. The weather can play a significant part in the enjoyment of a walk here and I’d recommend choosing a good-weather day if possible. Most of this walk took place on very quiet roads, Slievenaboley Road being the only section where we met more than the occasional vehicle.