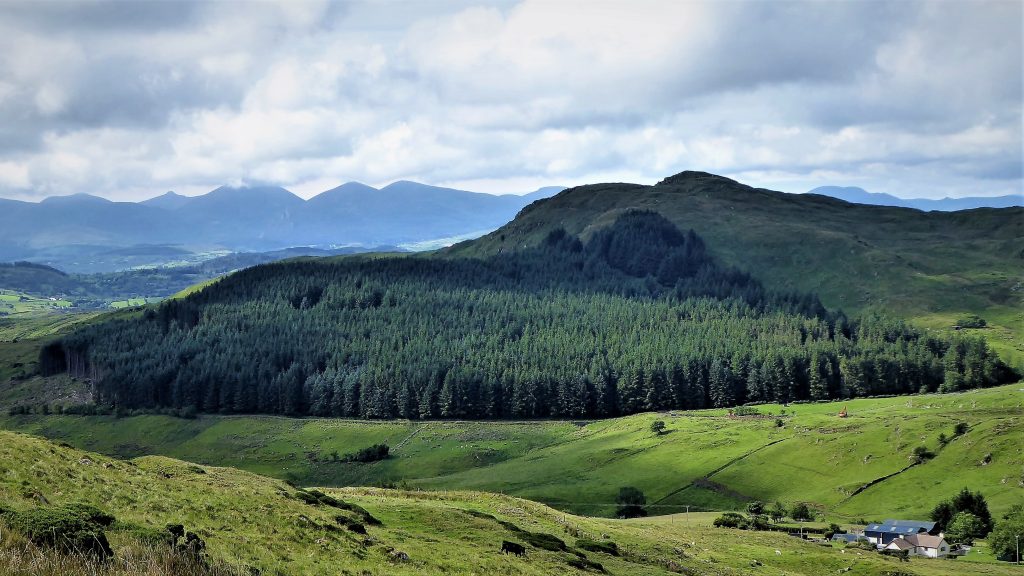 One of the lesser known and less visited of the Dromara Hills, Slievegarran is bounded by three of County Down’s most outrageously scenic roads, Ardglass, Ribadoo and Kilnhill. At 391 metres, it is not near the top of the altitude charts (it is the 972nd highest place in Ireland) but its charms rival peaks of much greater stature.

Access to Slievegarran is not straightforward, with no obvious paths to follow and no established entry points. The course described here may not be the only way to the summit, but it is at least fairly uncomplicated and leads to the summit quickly and safely. 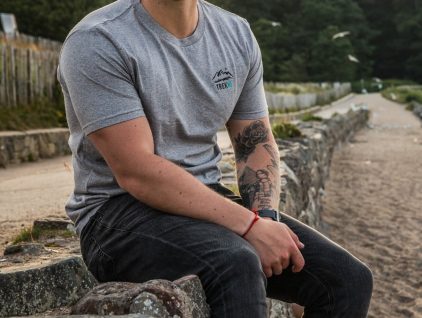 SHOP: Organic cotton tees available in a range of colours

After parking on the roadside verge at Grid Ref 323424, a fence needs to be crossed but, rest assured, it is the only fence crossing on the route. 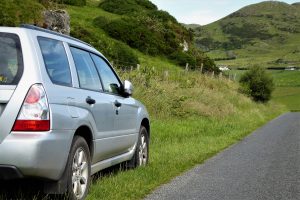 After gaining open ground, head in a north-westerly direction under a line of large rocks for about 75m in the general direction of Slieve Croob. 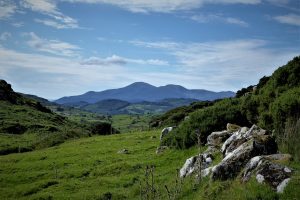 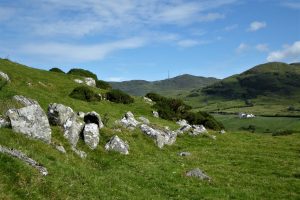 Begin gradually to veer due west over the low ridge, walking parallel to the tree plantation on your right. Make for the point where the fence crosses the ridge and the tree line seems to end. Pic 4 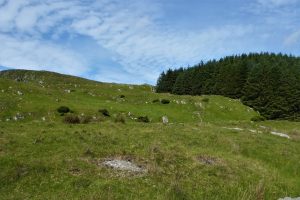 The views towards the south and east are excellent as you gain height. 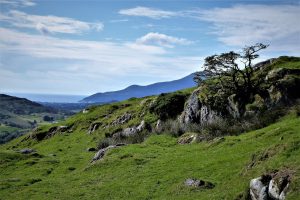 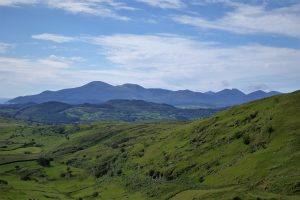 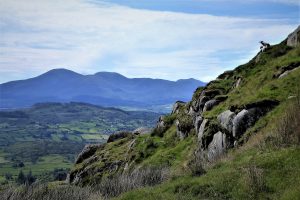 On reaching the top of the first ridge, the tree line continues down to a hollow and then up a steep slope before petering out. 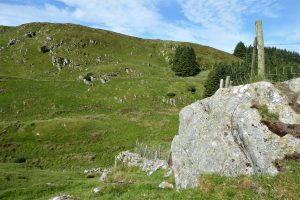 The hollow is carpeted with sphagnum moss and can be quite soggy, but it is manageable by using the clumps of rushes as stepping stones. 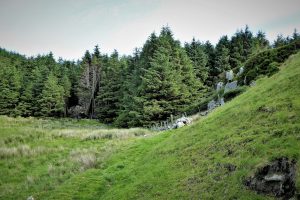 As the views continue to entrance, continue up the gradually steepening slope. 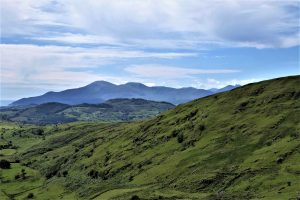 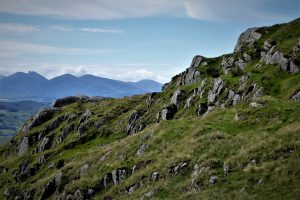 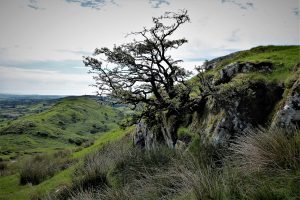 Halfway up the slope you encounter another fence but it can be squeezed around reasonably comfortably depending upon body conformation. 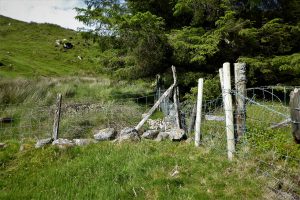 From here to the final approach to the summit, the going is very steep, but soon flattens out as you near a gate which leads to the summit area. 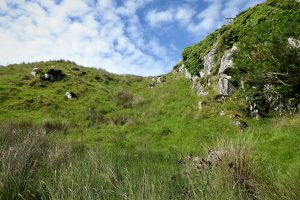 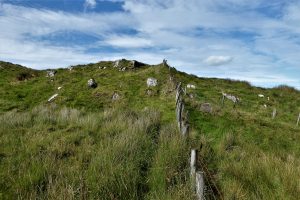 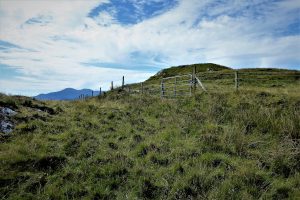 The summit (Grid Ref 316423) is strewn with boulders and large rocks some of which create a platform effect with sheer drops below. 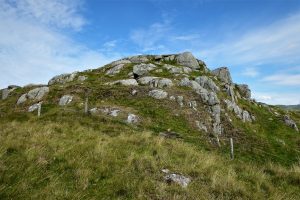 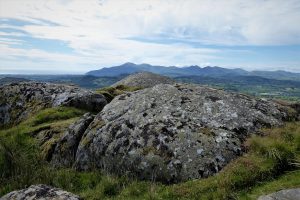 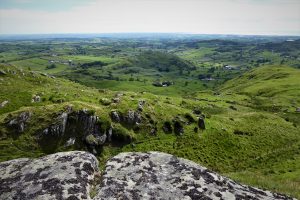 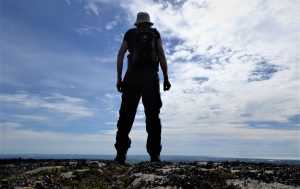 The views are unrivalled on a clear day with an unbroken 360˚ vista stretching in every direction. The nearby Mournes are the highlight of the landscape palette, with a marvellous east-west panorama of peaks. St John’s Point and the Irish Sea can be glimpsed to the east and in the west, Slieve Gullion’s elongated summit plateau dominates the scene. To the north and north-east, Dechomet Mountain and distant Lough Neagh and the Belfast Hills should be discernible in clear visibility. 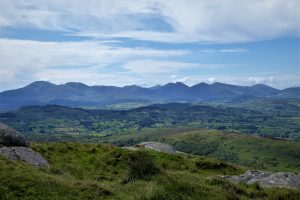 The return journey takes the same course in reverse, although it is possible to loop around to the south of the boggy hollow by dropping down from the summit about 100m short of the gate and fence. However, this route has some very steep sections and needs careful negotiation to snake through several interesting rock formations. 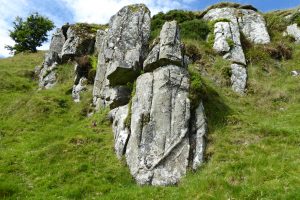 It is doubtful whether this hill has been explored by more than a handful of hikers and there are probably several alternative routes to the summit and back to the road by using one or other of the many intersecting sheep tracks. 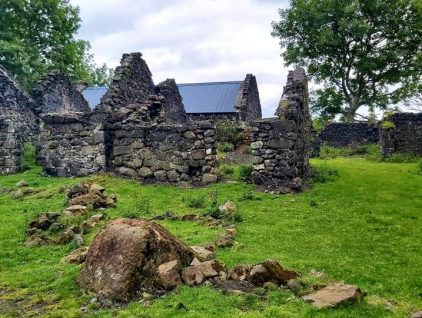 From Dromara, take the B7 for Rathfriland. After just over 2½ miles, turn left onto Finnis Road, signposted for Slieve Croob Inn Seeconnell (now repurposed as a care home). Carry on up Finnis Road, which mutates into Clonvaraghan Road, for the next 4 miles before turning right onto Macinnish Road, then left onto Ardglass Road. A short way up Ardglass Road there is space to park on the grass verge on the right almost opposite a sheepfold.

This walk will appeal to lone hikers as the likelihood of being disturbed is minimal. Keep a map and compass handy as the weather can change in the blink of an eye and there are no definite paths to guide the unwary traveller.