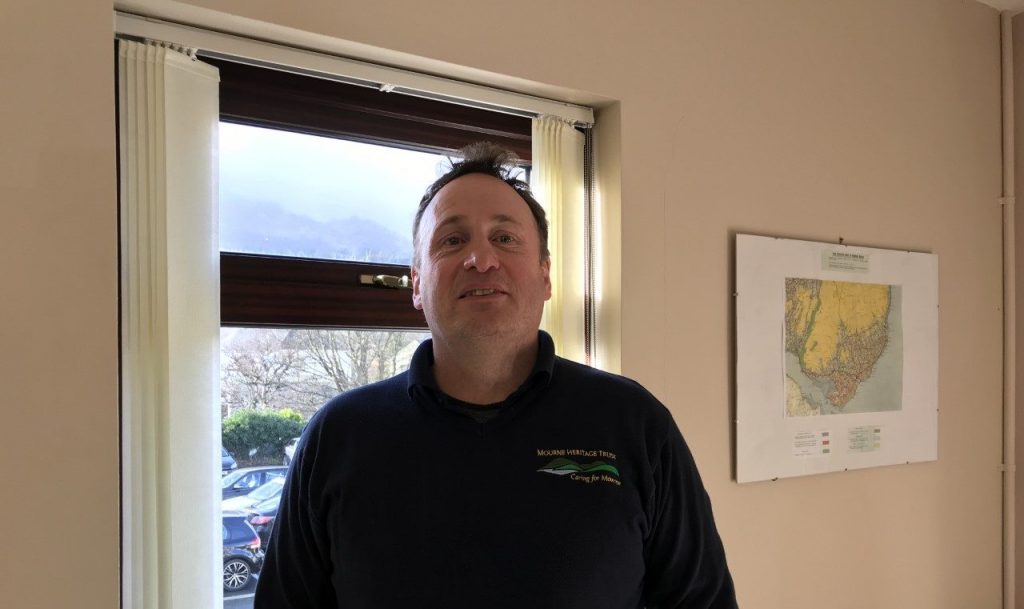 I recently met up with Martin Carey, CEO of Mourne Heritage Trust, to find out more about what the trust does to help preserve and promote the Mournes Area of Natural Beauty.

So Martin, tell me a little bit about yourself.

I’m from Dundrum, so I grew up in the Mourne Area of Natural Beauty (AONB), at the foot of the mountains really. Our family home was the cottage beside the castle in Dundrum. So walked out the door every morning to go to school, and the first thing I saw was always Donard in all its changing guises through the seasons. 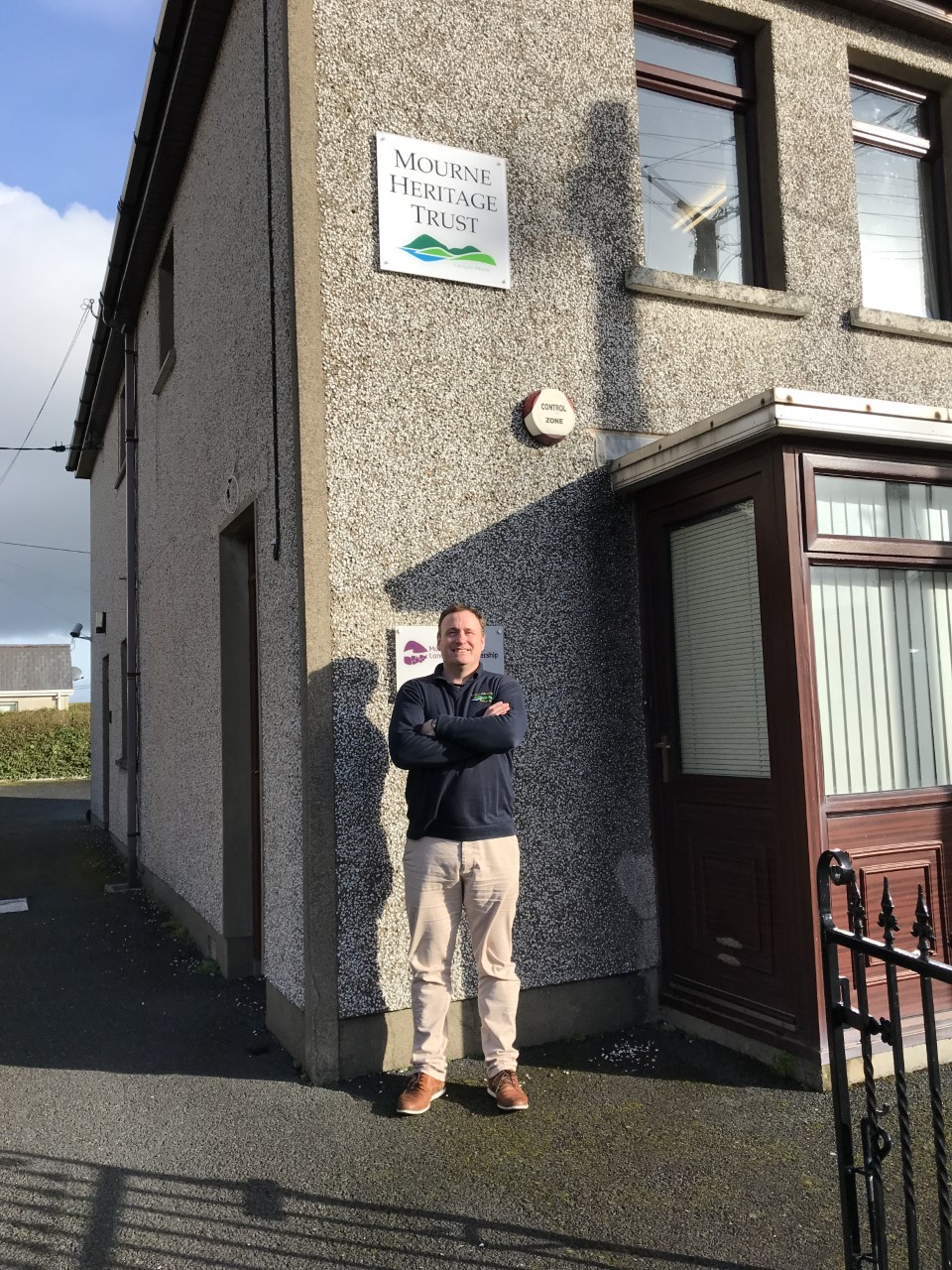 I always had a strong affinity with the place. Murlough would have been my playground when I was a child. My dad was from Ballymartin, and when he was a kid, he would have gone up to the Blue Lough above Carrick Little. So we would have had the odd wee family day out there.

And then found myself getting a job in Down District Council, so we were able to move back home from Belfast. And then when the post came up in the Mourne Heritage Trust I was keen. I suppose it was just the sense of the place and pride in where you come from that made my mind up as much as anything.

And what does your role as CEO of Mourne Heritage Trust involve on a day-to-day basis?

The biggest thing day-to-day regrettably is just to keep funding coming in, because it is quite insecure. We do enjoy good support thankfully from the council, environment agency, and Tourism NI. So that is the primary job – ensuring that we get the funds in to keep the show on the road.

Not having a government affected that directly this year because our NIEA funding is on a 3-year cycle. And the current cycle runs out on the 31st March. But because of the absence of an executive the grant programme that provides that was very late in opening.

It’s made more difficult by the fact that landscape and environmental management is by nature a long-term endeavour.. You need to be doing things over a long period. So that inability to plan is challenging. It’s the biggest challenge we have.

Tell me a little bit more about the National Park.

In 2006, there was a proposal to put a national park designation effectively on top of the AONB, which is the map on the wall of my office. It covers the whole expanse from Cranfield in the south right to Dromara and Slieve Croob in the north, and from Newcastle and Dundrum right across to Warrenpoint and Hilltown.

But there was a lot of opposition. A lot of folk, particularly farmers, were just concerned about bureaucracy and restrictions that might come on agriculture and other forms of economic development. By no means all landowners had those objections. Some we spoke to were curious, asking ‘could this actually help us, add value to our products, bring in additional funds to do different environmental works?’. But in the consultation process the loudest voice was a negative one. And so it was set quietly aside by the government after a couple of goes by ministers to put it in place.

There are still folk locally who feel it would be very valuable, that it would be an economic and social driver for the area. And that voice still exists. I don’t detect an appetite in government to revisit it, though.

What’s the core aim of the Mourne Heritage Trust? If you had to sum it up in one sentence…

Our mission statement is quite a bit longer than a sentence. But really, it’s to protect the environment in a way that benefits local communities effectively. So, to look after the place but also derive economic and social benefits from it. So we’re always trying to find that balance, ensuring that it’s not environmental protection for it’s own sake.

We’ve talked about the Mournes being an area of natural beauty in Northern Ireland. What does that mean exactly? Does it just have to be really beautiful to be designated as that?

That is it effectively. There are folks who do these quite scientific studies to almost try and quantify scenic beauty. It doesn’t appeal to everybody, but it’s an area that is recognised as having outstanding landscapes features. And mostly, that’s what meets the eye.

The paths is a big one because that’s a great example of where we combine the protection (combating erosion) with providing access for people. There are parts of the Mournes where the landscape has been degraded by recreation. There are others where things like past wild fires, overgrazing at a time, and perhaps a bit of erosion from walking have all combined to leave bare rock.

So we’ve put quite a bit of emphasis on trying out ways to help that recover, like re-profiling: if you’ve been up the mountains, you will have seen those peat hags that are almost vertical, some of them with a bit of an overhang. If they were left they’d erode underneath further to the point where they’d collapsed, and then would be washed away. So we re-profile them.

There’s areas round Binnian Lough and the Binnian-Lamagan col that have really rapidly recovered as soon as we put those in place. Another big one then is wildfire control. 2011 was the last really big spate of wildfires. But we did have some significant incidents last year. So a lot of our staff have been trained up in places like Catalonia in Northern Spain in techniques to prevent the spread of wildfire.

And a lot of that was that featured in the Chronicles of Mourne, right?

Yes, the heathland work featured in the show alongside the path work. That was Niall and Katie. And then our wildfire control was featured in Home Ground on the BBC. It’s like a Country File-type show and they filmed a controlled burn that we did up at Bloody Bridge.

Other things that are going on day-to-day would be related to erosion control. We’re trying to mitigate all the other impacts of recreation, and litter unfortunately is a massive one.

We’ve done things like repair boundaries in fences or stone walls, put in additional stiles where they’re needed, put in signage to ask people to keep their dogs under control, put in signage to keep people on the most sustainable track without straying onto private lands and climbing over fences and things.

Sometimes people ask ‘what is too many people in a landscape’? It’s not a simple equation, but if you’ve a good management effort that’s mitigating those potential impacts then a landscape can cope with many more people. By the same token, if you don’t have that management effort then a relatively small number of people can do real damage. 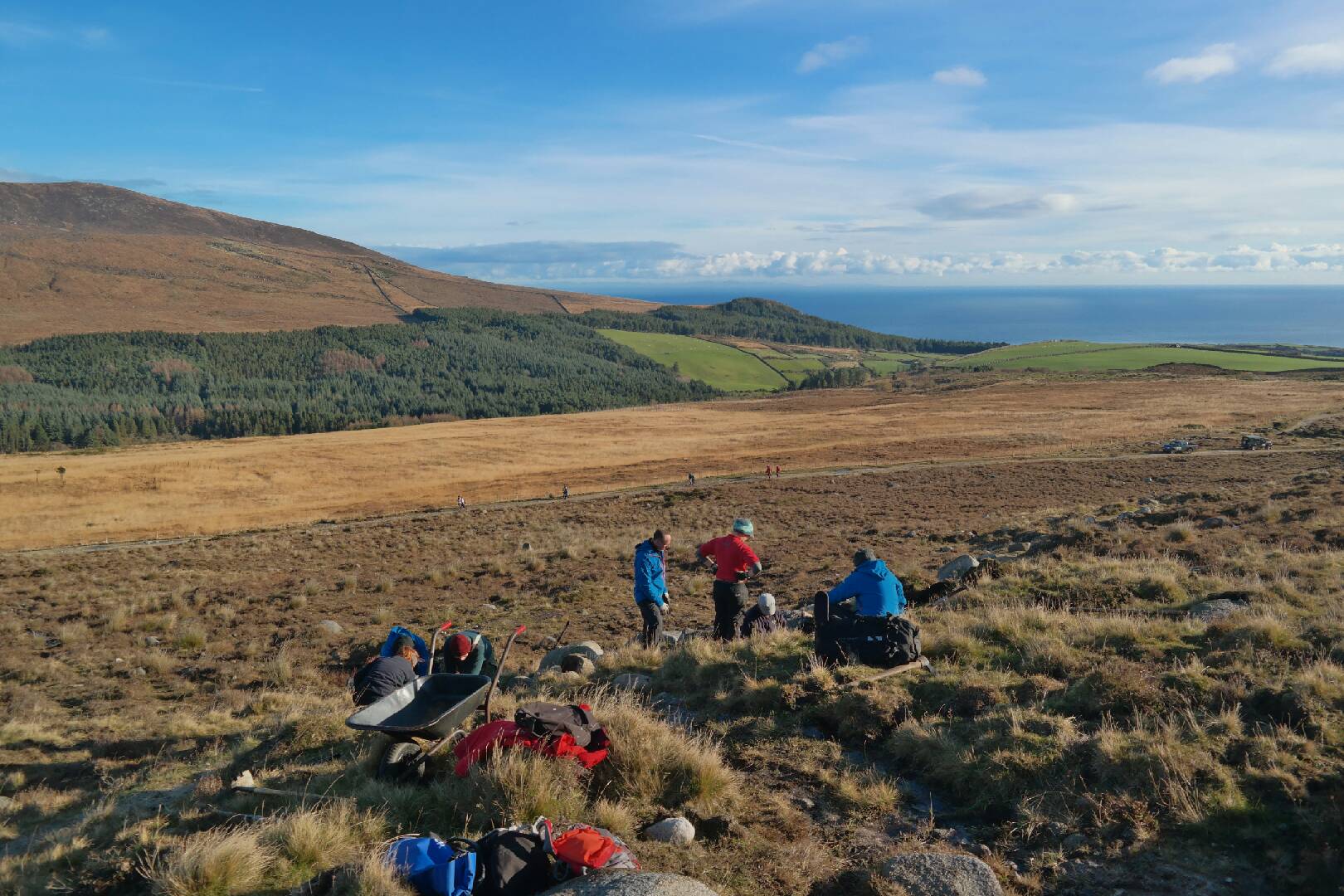 And what’s your personal favourite spot in the Mournes?

Like a lot of locals for me it’s Binnian. Because you know, just the sheer variety of what you get on the way up. And when you get up a bit further you’ve got the Blue Lough, and if it’s a good day you can nip in for a swim. And then you get a bit of a decent climb up to Binnian. You’ve the Tors on top which are features in themselves. You’ve got the view down into the Silent Valley, and then you can pick up the Mourne Wall. Come down. For me, that walk has everything – it’s a nice length and now there’s a nice café at the bottom of it, too!

That one sticks out a mile for me. I like Doan as well for a shorter one. For other hikers, I would always recommend Doan for someone who wants to get into the heart of the Mournes reasonably quickly and get a fabulous view.

What can the people of Northern Ireland do to help the Mourne Heritage Trust with their work?

Volunteering is a big one. As you heard from Katie, we get really fantastic input from volunteers. I think possibly people don’t appreciate just how profound an impact they have.

We had a volunteer who trekked the Mournes nearly every day weekly for the guts of a year, plotting where the surviving Mournes Juniper plants are. It’s a genetically distinct strain of juniper that exists nowhere else, and from that we’ve been able to develop a project to propagate it and start planting them back into the landscape. 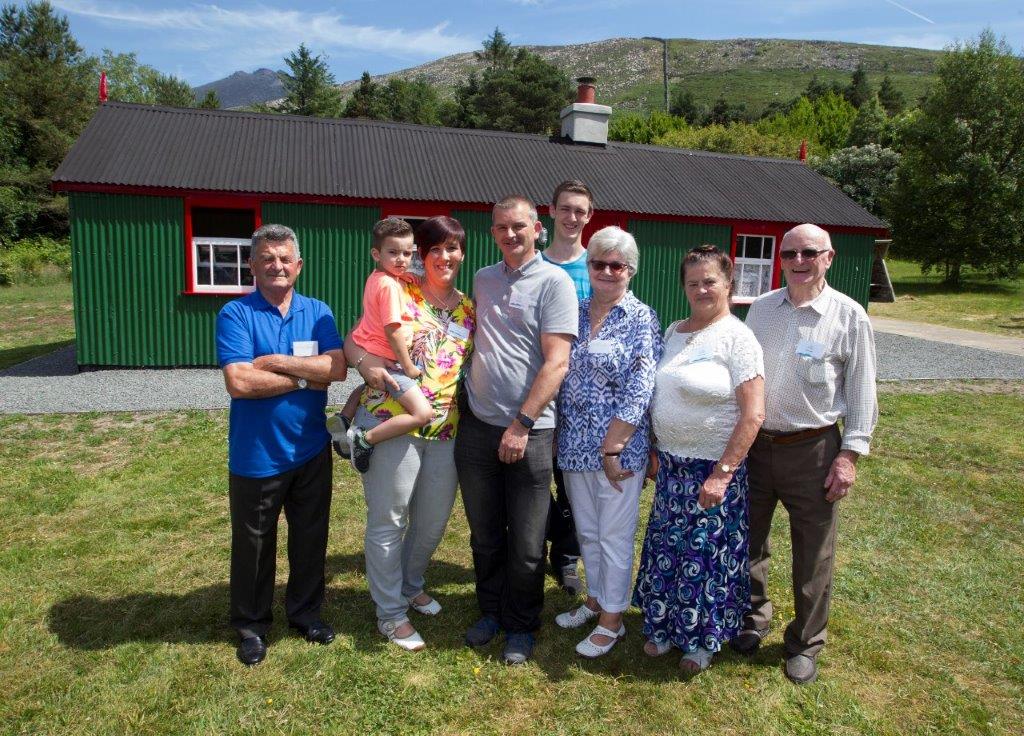 All from one volunteer?

Just from one volunteer who took it on himself, partly because it was a way to explore the area. We’ve also had a volunteer who has plotted the remains of the granite industry. The smithies, the quarries, etc. So it’s amazing what people do for nothing.

We’re also lucky to receive donations from various walking groups and individuals. Most recently we’ve been nominated as charity of the year by City Group in Belfast.

So what we try and do with any donations we receive is ensure that the money is focused on the volunteers, so that the kit needed (good gear, good boots, good tools) is available to make them comfortable and effective when they’re out there. Generally, that’s where our donations go.

Those are the ways people can help us, and we really get fantastic help.