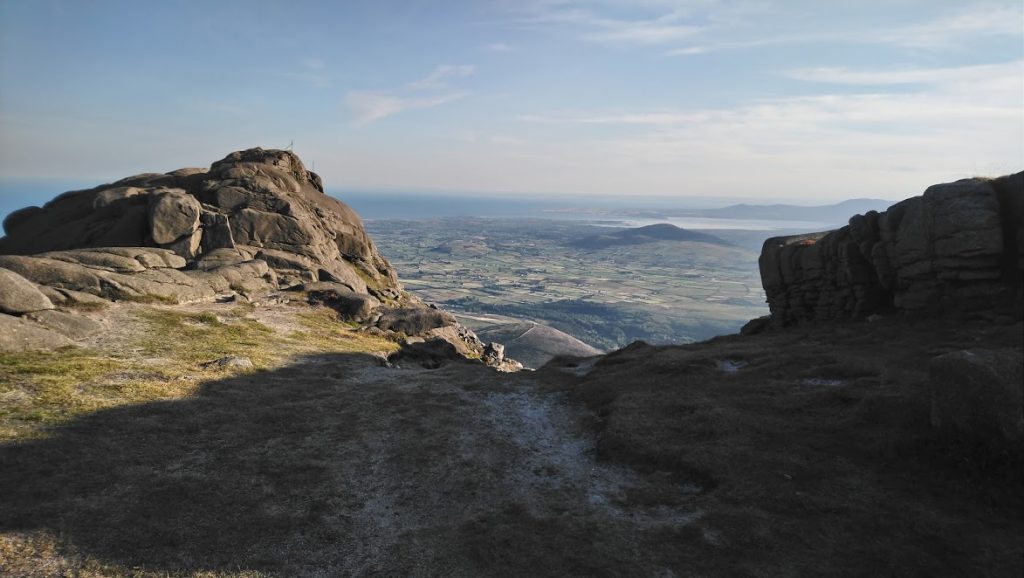 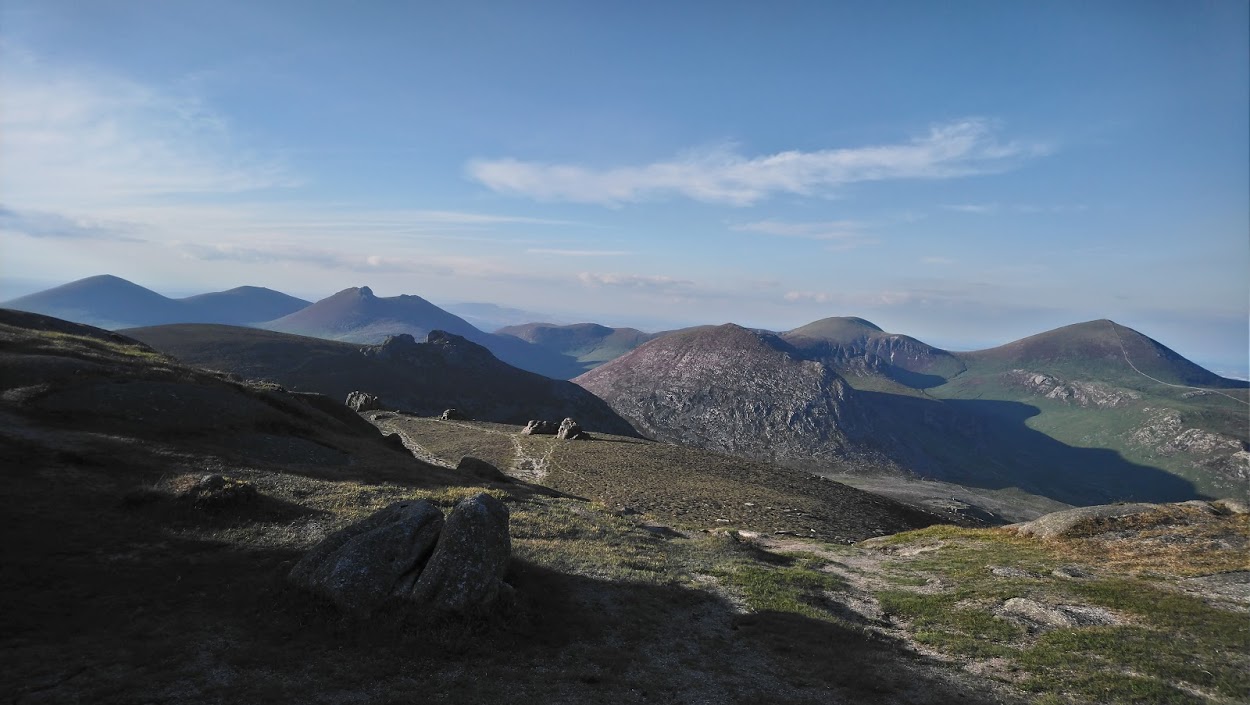 The trek I have enjoyed most recently was a climb up Slieve Binnian via the Blue Lough on a sunny summer evening on July 19TH this year. My 21 year old son Aaron came with me and we left the car in the private car park which is about half a mile up the track from the Carrick Little Car Park at the junction of the Head Road and Oldtown Road. It costs £3 or £5 for an overnight stay and there is a grassy area for tents and a toilet and wash facilities. This is a safe place to leave your car if you plan to spend the night in the hills as the land owner lives nearby and there are always workers in the area. We followed the path, through the gate and along the edge of the Annalong Wood. We had arrived at around five o’clock but the sun was still quite high as we reached the point where the trees ended. I wanted to find the Percy Bysshe cave so we followed the path leading down into the Annalong Valley. Cove Cave on Cove Mountain was obvious straight ahead but we couldn’t find Percy Bysshe. We followed the path over the hill to the Blue Lough not realising that the cave was off to our left on the other path (we didn’t manage to find it). The Lough was very blue indeed and contrasted strongly with the grey sheer slopes of the Lamagan Slabs which surrounded the water, making a sort of natural echo chamber for the sheep bleating above our heads.

After resting there for a few moments we continued on the path with Slieve Binnian to our left, Slieve Lamagan on the right and Ben Crom rising directly in front. We reached the point where the path crossed another path leading between the two mountains on each side and we continued on for about 30 yards until the ground began to drop away to the Ben Crom reservoir. We sat down and took a drink while scanning the cliffs of Ben Crom, the rocky top of Slieve Bernagh to our right and the end of the Silent Valley reservoir to the left. The air was completely still and we could just hear the waterfall on the other side of the reservoir. We retraced our steps to the crossroads and made our way up the slopes of Slieve Binnian. The path here is well worn and easily followed. Soon we were climbing the steeper sections, occasionally scrambling over rocks until the ground levelled off a little. We looked down on the route we had taken and over to Slieve Lamagan, its summit still above us. The sun had lowered a little and the valley below was now half in shadow. I usually climb in the morning or early afternoon so being there in the evening was a new experience as the lengthening shadows gave the mountains a completely different appearance.

Soon we arrived at the first massive stony outcrop on Binnian, the North Tor with its weathered, crumpled rocks lying in layers piled on top of each other. We were surprised to come across what looked like an abandoned sledge made from half a blue plastic barrel with a little seat made from a tyre, foot straps and an orange guide rope. There was an area nearby which looked like it had been cleared of stones and where the grass had been flattened and we wondered if someone had been mad enough to slide down the steep slope in the winter snow and how on earth they would have been able to stop themselves before the sheer drop at the end of the run.

There is a clear, broad path between the Tors and we followed this, glad to be on level ground for a while until we started to climb again to the summit. On the left the sun was still shining on the Annalong Wood, now far beneath us and the little Binnian Lough, which we had been unable to see from the valley, was even bluer than the Blue Lough itself. Beyond it, the entrance to the Binnian Tunnel was just visible in the gaps between the trees on the edge of the wood. Somewhere, far beneath us, water from the Annalong River passed through the mountain to the Silent Valley. Eventually we reached the top and looked between the high rocks of the Summit Tor down to the reservoir and Carlingford Lough in the distance. The last time we had been here was a few years before on New Year’s Eve. Then there had been at least fifty people all talking loudly and eating their packed lunches in the snow. Now there was just one man who appeared to be meditating, sitting high on a flat rock with his legs crossed beneath him. We left him in peace and moved back a little to a flat table-like rock where we ate our food as we looked back on the path we had travelled. The silence was remarkable; no traffic, no wind and not even the singing of larks or other birds which you would usually hear on such a good day. All the high Mournes were laid out before us, stretching from Meelmore and Meelbeg on the left, across Slieve Bernagh and the Hare’s Gap, then the long bumpy rise to the top of Commedagh. The summit of Donard, slightly to our right, was the only spot which seemed to be higher than where we were sitting. The shadows were now long and deep in the valley but the sun was still on Rocky Mountain and the rocks of the Hare’s Castle.

After about twenty minutes eating, talking and enjoying the view, we made our way towards the Mourne wall through a gap in the rocks, stopping to look down on Wee Binnian. The previous year we had made the climb from that direction, scrambling up the much steeper slope, sometimes having to use hands and knees to make our way up.

The route from this point was a long descent straight down the wall. On the way we heard a strange buzzing, clicking call and I managed to get a picture of the small black white and red bird following us which I later identified as a Stonechat. The path along this section is in the process of being paved with large flat stones which makes the way down much better underfoot. We eventually arrived back at the gate and then followed the path the short distance back to the car. I was glad we didn’t have to trudge the extra half mile down to the main car park. It had been a very peasant four hour hike which we had enjoyed at an easy pace. 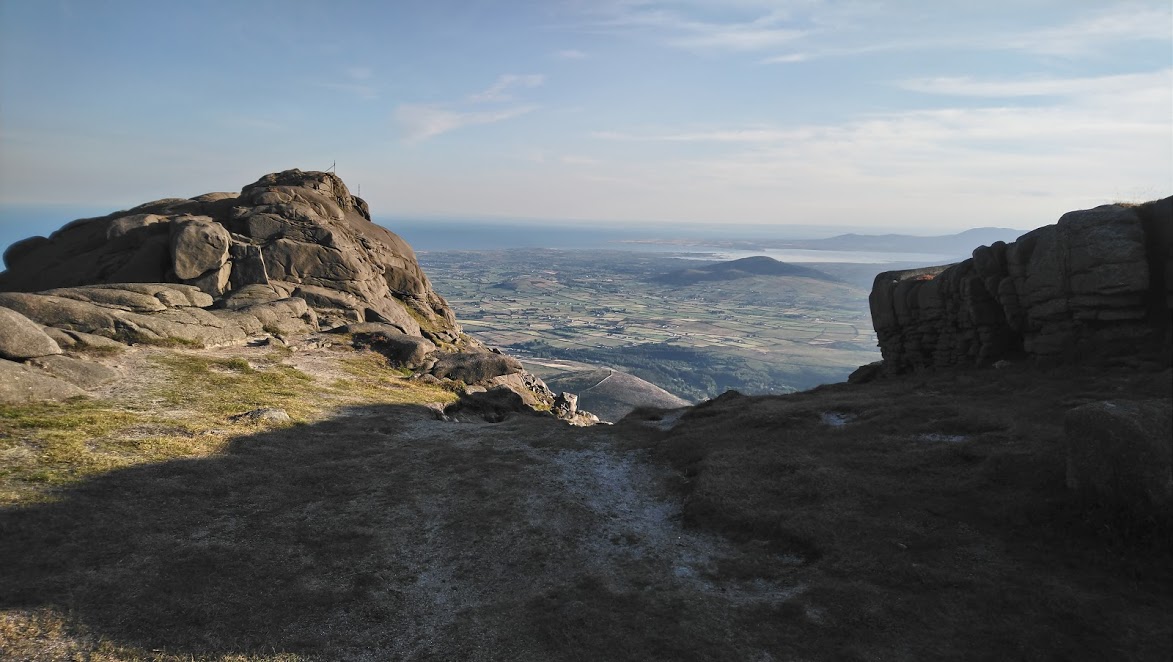 We did the walk between 5 pm and 9 pm on a summer evening which I would highly recommend. Binnian is an enjoyable walk anytime of the year, especially when it has been snowing but care would need to be taken if climbing from the Blue Lough as the rocks on that side can be slippy. 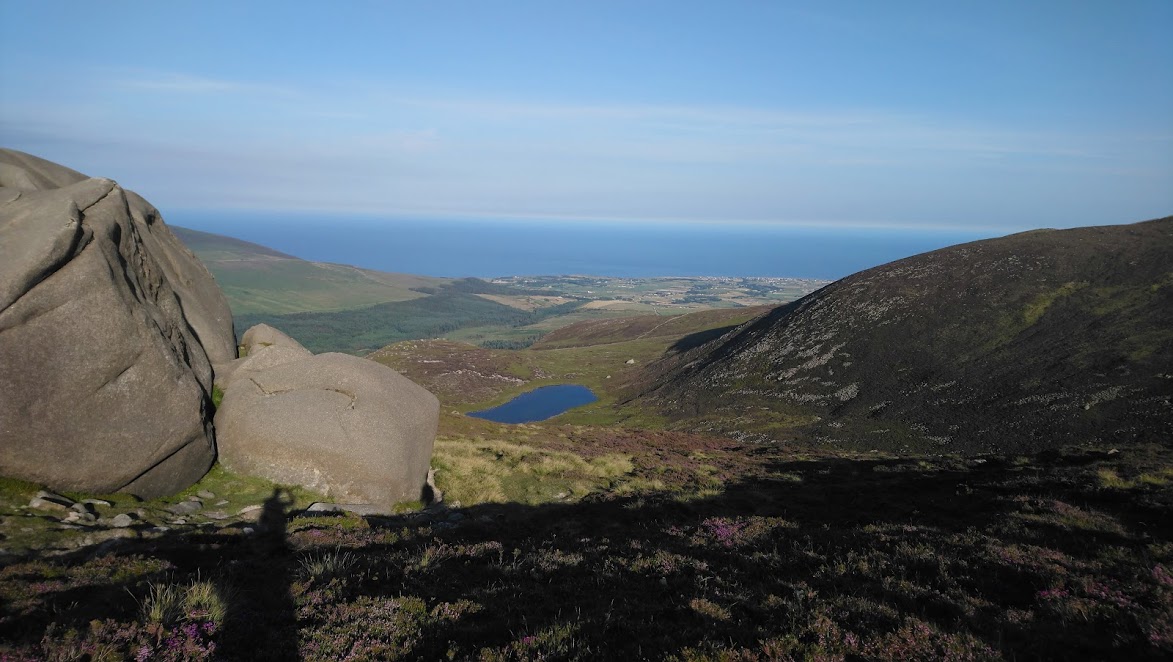 You would like a great view. Binnian stands slightly apart from the other mountains and the summit provides a panorama of the high peaks to the north, the sea and Carlingford Lough to the east and south and the lower Mournes and reservoirs to the west. 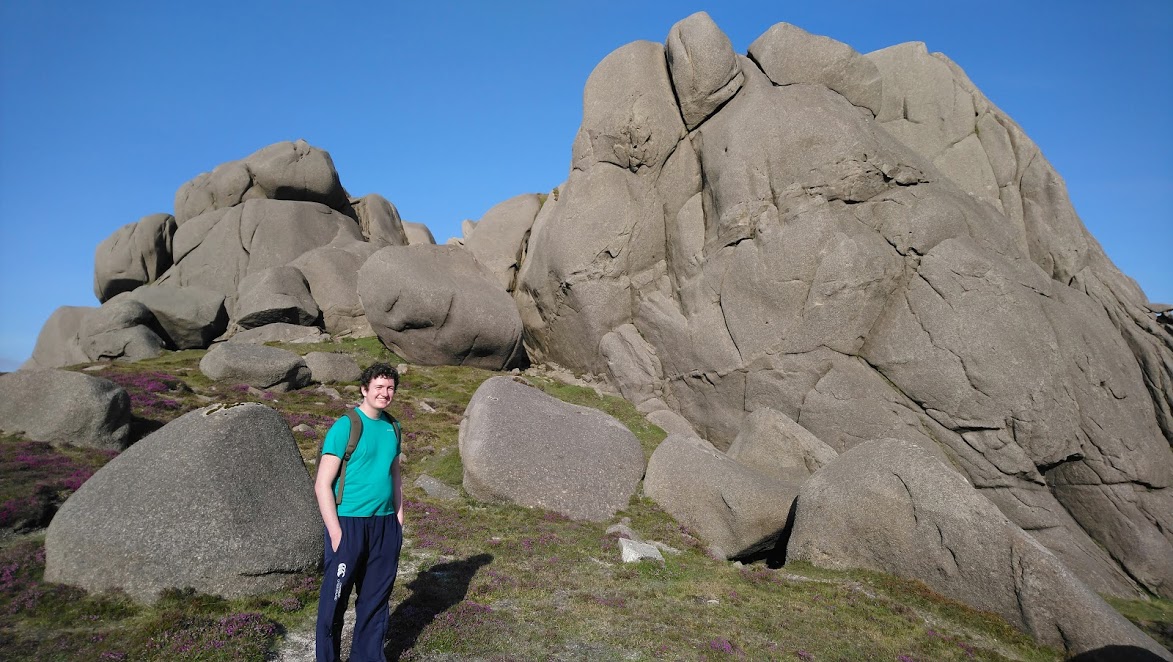 The view and the fact that it is not a particularly difficult climb. I enjoyed the walk on the day described because it was an unusually calm and sunny evening.

Check out the forecast for the Mournes on metoffice.gov.uk before you go. It is as reliable as a mountain forecast can be and provides a good estimate for the chances of a cloud-free summit for the day of your walk.