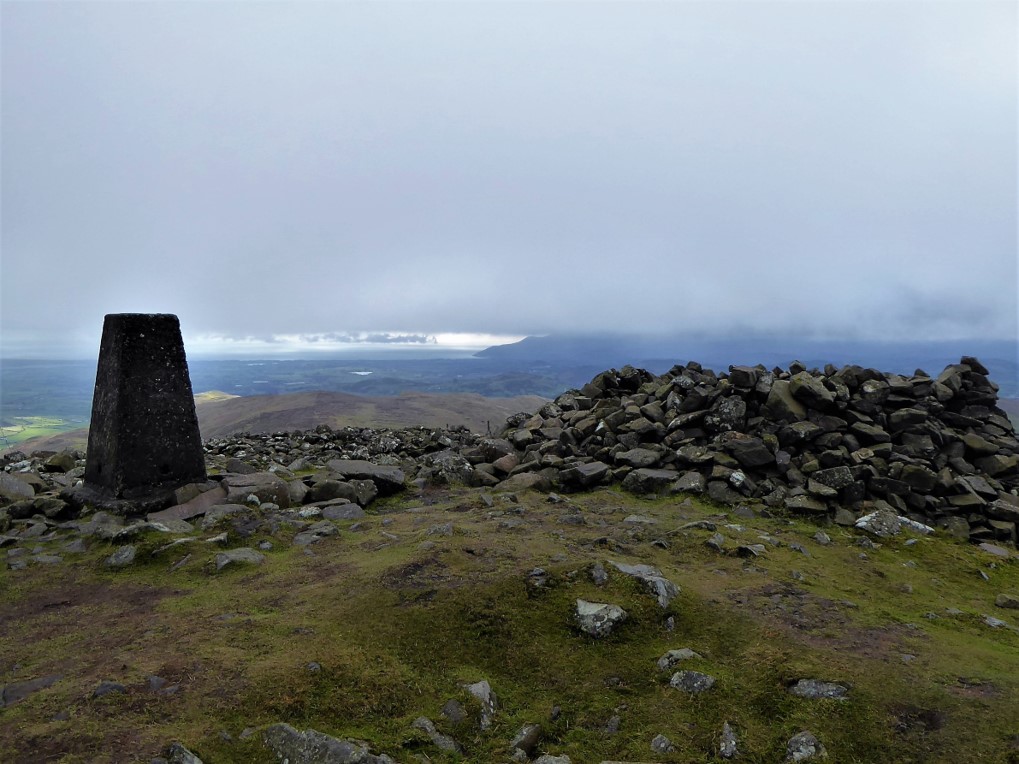 Having set out for the summit of Croob several times using the Dree Hill car park and the transmitter road, I decided to try an alternative route following the Pass Loaning Permissive Path. A Permissive Path is not a Right of Way, but use is allowed by the landowner, who may impose certain rules and restrictions agreed with the relevant council. The route begins in the small village of Finnis, just over a mile from Dromara.

I parked at Peter Morgan’s Cottage, which serves as the village’s community hall. Judging by the community noticeboard and the public art installation, which features images associated with the Celtic harvest festival of Lughnasa, it was obvious that the people of Finnis are proud of their local mountain and protective of the traditions associated with it. Recent years have seen the revival of the Blaeberry Sunday walk to the summit of Slieve Croob.

READ: Guiding around Gullion: Des Murphy on the rich mythology of South Armagh

In days gone by, in celebration of Lughnasa, local people would pick bilberries, known locally as blaeberries, on their way to the summit where dancing, music, carousing and courting would ensue. The tradition died out gradually in the 1950s; writing in 1951, renowned geographer and folklorist Estyn Evans referred to it dismissively as “no more than an occasion for family picnics” *

Before starting my trek, I took a quick look at the adjacent River Lagan, where a pair of dippers – attractive, white-chested small birds of clean, fast-flowing streams – were busy feeding on insects in the clear waters. At this stage, the river is only about a mile or two into its 53-mile journey to Belfast.

I began the walk by making my way up Dree Hill for about 30 metres before turning left onto Drin Road. After a pleasant, initially steep, 1.2km traffic-free walk, a right turn took me onto Pass Loaning.

The concrete surface of the road made for easy walking on the gentle gradient. A wren shadowed my steps as it flitted from crevice to cranny searching for insect prey in the old stone wall that bordered the path. After 1.4km, a stile and marker post led onto a rougher track gouged out between two low, irregular stone walls.

A fairly steep ascent followed, with progress aided by the strategically placed marker posts, which worked on the basis that when one was reached, the next would be visible.

Beware though, this system requires clear visibility and good eyesight.

After about a kilometre I reached a second stile, the landscape becoming progressively wild and rocky as height was gained.

I kept on the lookout for birds of prey having spotted buzzards and kestrels on previous hikes to the summit. Other walkers had reported sightings of the rare red kite, but today my only avian companions were small flocks of meadow pipits foraging in the scrubby vegetation.

The views were superb, with the Belfast Hills standing out clearly to the north, Scrabo Tower and Strangford Lough to the east and the Sperrins just about discernible to the west.

After crossing the second stile, a short hop of less than half a kilometre took me to a further stile, with the summit transmitters coming into sight. The reasonably flat 1½ km trek to the junction with the transmitter road was punctuated by several very boggy stretches, evidence that the source of the Lagan lay close by.

Opinion is divided on the actual location, if indeed there is one specific source, but when you spot a grit bin that has been downcycled to a rubbish bin, you’ll know you’re close.

Less than a kilometre after joining the transmitter road, I arrived at the summit. The deteriorating weather had the beneficial effect of obscuring the rather ugly transmitters as I directed my gaze towards the mist-covered Mournes. The occasional gap in the murk afforded a glimpse at what is one of the best views in the province in favourable weather.

Leaving the summit, it was all downhill for 2.4km to the car park on Dree Hill.

…passing over the twisting course of the adolescent Lagan several times.

Dree Hill is not busy, but it’s by no means traffic-free; however, in clear weather it is not dangerous as it is mostly straight, with traffic easily spotted well in advance. It would be best avoided when visibility is poor.

After a last look at Northern Ireland’s longest river and its resident dippers, I made my way back to Ballynahinch. Once home, I peered back at Croob, which now sat resplendent in bright sunshine as if to emphasize the capricious nature of our Irish weather.

From Dromara, take the B7 for Rathfriland. After about 1¼ miles, on reaching Finnis, turn left onto Dree Hill; after a few yards, turn left at Peter Morgan’s Cottage and park (you may have to open the gate). The contact number of the custodian is listed on the community noticeboard and it would be courteous to let them know that you are leaving your vehicle in the car park for 3 hours or so.

…you enjoy a reasonably challenging walk with the prospect of superb views. If you can be flexible, try to choose a day when visibility is expected to be good, although in my experience a clear view from the summit is never guaranteed. There are some very boggy sections and gaiters would be a distinct advantage, particularly over the last kilometre of the track before it joins the transmitter road, during which you will come close to the source of the Lagan. The route is quite well signed, but can be tricky in misty conditions when compass and map are essential. The walk would be unsuitable for groups of more than 2 or 3 as nearly half takes place on public roads. Dogs are not allowed.