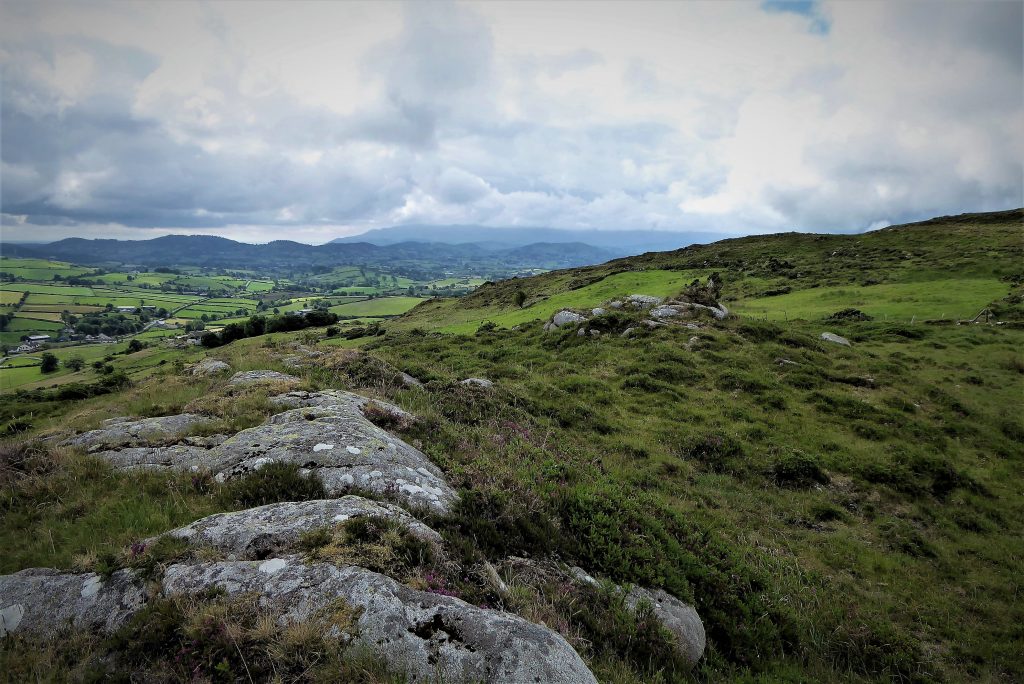 The Dromara Hills are one of the country’s hidden gems. While the Mournes teem with walkers every weekend, this area remains relatively unvisited except by a few discerning walkers who appreciate a walk in solitude. The one exception to this narrative is Slieve Croob which attracts many walkers. It has the advantage of offering a car park and an easy, uncomplicated journey on a service road to a summit with excellent views, if you can ignore the adjacent telecommunications hardware. Slieve Croob at 534m is the highest peak in the Hills range by some margin with Slievenisky (446m) and Cratlieve (429m) offering the nearest competition. 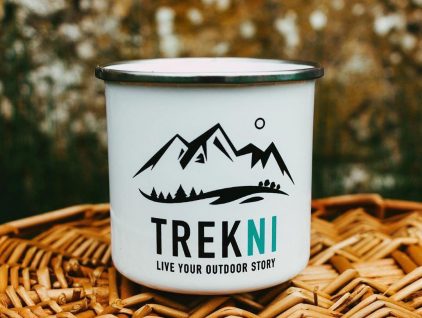 This walk covers Slievenaboley and Cratlieve, two hills that are rarely visited. Both have their unique charms and Cratlieve in particular deserves more attention from the hiking fraternity. For access to Slievenaboley, park at the Windy Gap car park on Slievenaboley Road, BT31 9UF. The car park must have one of the most scenically magnificent locations in the country with great views of the Mournes to the south and the Belfast Hills and beyond to the north. 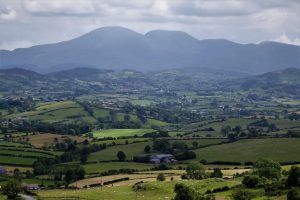 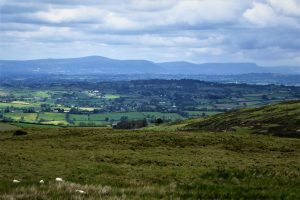 Leaving the car park, turn left and walk down Slievenaboley Road for about 150 metres turning into the first farm track on the left. After a few metres go through the first gate on the left and skirt right and gradually upwards on a faint path round a young tree plantation. A glance back will reveal expansive views of the Belfast Hills. 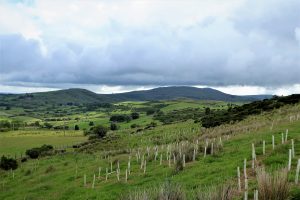 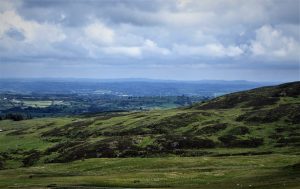 The rest of the walk to the 324m summit (Grid Ref 270425) involves heading in a generally west direction, scaling a series of fences in the process. It must be pointed out that this requires mobile joints and flexible ligaments as a certain amount of stretching, twisting and manoeuvring is inevitable in fence negotiation. You may find that you are kept under surveillance by inquisitive gangs of sheep as you walk. 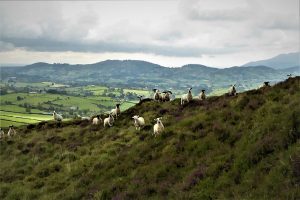 The summit isn’t marked but the highest ground is close to an area where the remains of an old wall crosses a rocky plateau. 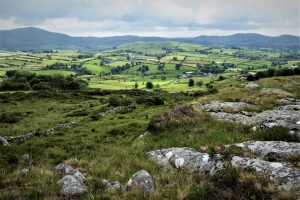 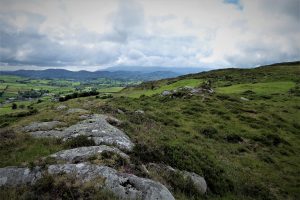 The views from the top are spectacular – Mournes to the south, Slieve Croob to the east, Deehommed Mountain (known by locals as Dechomet pronounced ‘Dake-homm-ette’ said fast) to the west and Slievegarran to the south-east.

Make your way back by roughly the same route making sure to avoid damaging any of the fencing, some of which is quite old and wonky. The area is rich in wildflowers with orchids and bog asphodel in abundance in early summer.

Unless you are prepared for a long trek, you will need to drive to your next destination which is the car park for Slieve Croob on Dree Hill. Turn left out of the car park, drive down Slievenaboley Road and take the first road on the right, Carrigagh Road. The road passes Binder’s Cove souterrain which is worth a look, but of more interest is the magnificent Legananny Dolmen. About half a mile further, turn right onto Legananny Road. After about 1½ miles turn left onto Dolmen Road at the sign for Legananny Dolmen. Park in the lay-by and follow the short path to the dolmen and marvel at the building prowess of our Neolithic ancestors and ponder what inspired them to create this mysterious construction. 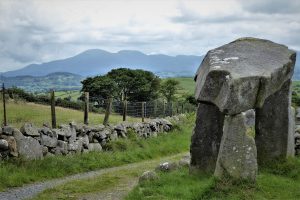 Carry on to the end of Dolmen Road and turn left onto Kilnhill Road and left again after a further 1½ miles onto Finnis Road. Take the next turn right onto Dree Hill and after less than half a mile turn right into the car park.

Get the boots on again and get ready to strike out for Cratlieve, also known as Legananny Mountain, unless you fancy a jaunt up Slieve Croob first. Turn left from the car park and right when you reach Finnis Road. After about 200m, at the brow of the hill, turn left up a gravel path. After less than a kilometre you’ll meet two gates. 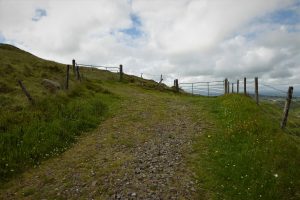 Take the left gate and carry on up the hillside heading south-west on a faint path which skirts a rocky outcrop. 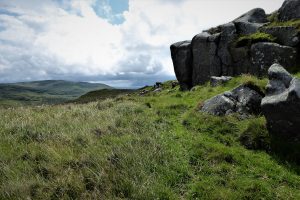 From here on a good day, Slieve Gullion should be visible to the south-west with Lough Neagh and the Sperrins to the north-west. As you move in a south-west direction towards the summit (Grid Ref 296446) the Mournes will come into focus sweeping round in an east-west arc. 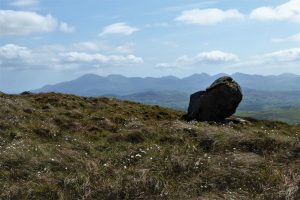 For the best Mourne Mountain views, cross to the south-eastern side of Cratlieve where the panoramic vista extends to the Cooley Mountains in County Louth in good visibility. 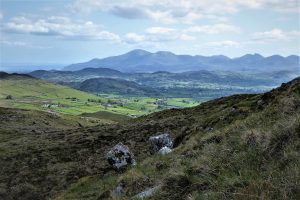 The return journey follows the same route back to Dree Hill.

…you enjoy a quiet walk in very attractive surroundings without too much of a challenge. If you do not relish the prospect of straddling fences it would be best to ignore Slievenaboley and make straight for Cratlieve. It is also possible to ascend Cratlieve via the dolmen path, although this makes for a much longer, more challenging outing.