The Ups and Downs of the Mourne Wall Challenge 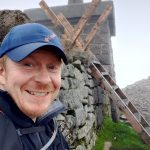 The Mourne Wall. That iconic ribbon of granite winding a tortuous 20-mile circuit over the highest peaks of the Mournes. It is such a familiar feature that it’s easy to take it for granted. A handy navigational aid, a windbreak, somewhere to sit and have lunch. I wonder did the Belfast City and District Water Commissioners realise, when planning the line of the wall over a century ago, that they would create what has become one of the most testing ‘challenge walks’ in Irish hiking? Probably not. 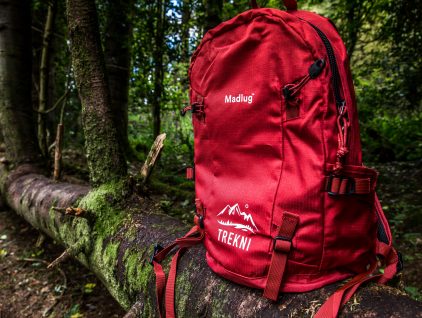 I had been aiming to do the Seven Sevens challenge this year, perhaps the more famous of the two big challenge walks in the Mournes. Like many, I had been trying to keep my mountain legs prepared despite the lockdown restrictions, stomping local roads and hills. Unfortunately, and understandably, the 2020 event was cancelled, so I set my sights on the Mourne Wall Challenge instead.

I found myself at Carrick Little car park in the cool pre-dawn light of what was forecast to be not the best of days for mid July – low cloud with the chance of some rain showers during the afternoon. Great. The Mourne Wall route crosses 15 mountain summits, including the 6 highest, and offers some of the most spectacular vistas in the range. Silent Valley from Slieve Binnian; the line of the wall dancing over the summits of Meelbeg, Meelmore and Bearnagh; the seemingly vertical ascent of the wall up the side of Donard from the Saddle. This was no day for sightseeing though. It was a day for getting the challenge done. In any case, the weather would help with water management and I’d much rather undertake a hike like this in cloud than warm sunshine (it’s a ginger thing, okay?)

There are a number of variations of the challenge walk route, particularly along the southern stretch between Long Seefin and Slieve Muck. I chose the version in Adrian Hendroff’s book The Mourne and Cooley Mountains: A Walking Guide (2018, p. 94), which describes 2860m of ascent over 33.5km (21 miles). I set off at 4:40am along the track towards the first summit, Slieve Binnian.

An hour later I arrived at the summit in heavy cloud and damp drizzle. The descent down the south-western flank towards Wee Binnian is the steepest on the route and unfamiliar territory for me. Abrupt gaps are encountered in three places along the wall circuit where the terrain is so steep (or vertical) that the efforts of the keenest wall builder or passing sheep are frustrated. The first of these is on the descent from Binnian (the others on Muck and Bearnagh). I felt decidedly unsure of myself in places as I searched for a safe route down in poor visibility. At last the gradient relented and I was soon skirting around the base of Wee Binnian and making my way down into Silent Valley and enjoying my first views of the reservoir.

The stroll across the top of the dam allowed a pause to remove my waterproofs and prepare for the climb out of the valley to Slieve Muck. This was new ground to me and I had read cautionary tales of the boggy terrain and steep climb which lay ahead. I was glad to be getting it out of the way early in the walk, before motoring on over the more familiar stretches of wall and summits further north. Well, that was the plan.

The climb up from the dam was made more challenging than expected by the lack of footfall and lush vegetation obscuring the path towards Slievenaglogh. Selecting the correct side of the wall to travel along also becomes apparent here, and studying this aspect of the route in advance is worth doing as it becomes important in several places along the circuit. While only 445m in height, the climb up Slievenaglogh is quite technical in places, and not to be underestimated. I paused on the rocky scramble to nibble on bilberries which peppered the slopes. There are great views from the summit towards Ben Crom, and for the first time you can appreciate the implausible route the wall takes up the sheer eastern slopes of Slieve Muck. Onwards across Banns Road and towards the most challenging climb of the route.

I brought three small treat-size bags of fizzy sour sweets along that day. From my experience of the Seven Sevens in 2019 I knew there would come points where a morale boost would be needed to get me through. I knew I would hit the wall. Trouble was, I was expecting this further ahead, at Bearnagh perhaps, definitely Donard, but not as soon as Slieve Muck. Yet there i was, barely a third of the way into the walk and already desperately fustling at my first packet of emergency sweets. What had gone wrong? Eventually I stood on top of Slieve Muck and contemplated how I could possibly complete the walk.

My confidence rose and fell like the undulations of the wall as it crossed Carn Mountain, Slieveloughshannagh, Meelbeg then Meelmore. The more familiar terrain brought little comfort until I found myself past the halfway mark and somewhat of a mental watershed. I paused on Meelmore to reflect on this, realising the quickest route back to the car now was to keep going. A fresh pair of dry socks and some food helped too.

Before attempting the intimidating west face of Slieve Bearnagh I paused at the small flow of water about halfway down Meelmore to replenish my water bladder. It’s worth noting that this, along with the pipe on Commedagh, is one of the few convenient spots to take on water along the wall. Having access to enough water could be tricky, especially on a hot day.

By the time I summited Bearnagh and approached Hare’s Gap, I finally felt that I could do this. I could feel the welcome flow of hiking along familiar trails and the distance starting to fall more easily below my feet. A sugar high and ibuprofen may have been something to do with it. I now looked ahead to one of my favourite hikes in the Mournes: the ridgeline along Slieve Corragh to Commedagh.

It was also at this point that the weather took a turn for the worse. Hiking in low cloud is not unpleasant, especially in familiar territory when navigation is of no concern. But add in sustained strong winds and horizontal rain, and it soon becomes a more serious proposition. I planned to make use of the summit shelter on Commedagh to don my waterproof trousers (everyone delays putting them on until the last possible moment, don’t they?) But I soon found myself joining a flock of sheep in a small quarry pit part way up Commedagh, seeking what shelter I could to batten down the hatches in full waterproof mode then and there. The hint of a chill in your core is a subtle reminder never to underestimate the risk of hypothermia in the mountains, even in July. I was confident that I could keep going in these conditions so long as I kept fuelled up and hydrated, with the exertion keeping me warm.

As predicted, I opened my second packet of emergency sweets mid-way up Slieve Donard. But this time it was more just because I love fizzy sweets and I needed the fuel, and anyway, the mental battle had been won miles ago. For the first time on the circuit I encountered crowds of people doing the popular climb up Donard, even on a wet miserable afternoon like this. At the summit, happy in the thought that the major climbing of the day was now done, I looked forward to the final few miles of the route back to Carrick Little. Beware though- while it may look like a straightforward downhill run back to the car, the miles ahead can become a nightmare if you drop your guard.

After descending Donard you are faced with crossing the Bog of Donard on the way to Rocky Mountain. At this point in the day the last thing you need is to be jumping across peat hags and squelching through bog. But there it is. I think it’s best to stay on the Annalong Valley side of the wall here, where there is a better path. Use the stile at the base of Donard if needs be, instead of having to scramble over the wall later like i did. The straight length of wall from Rocky Mountain to Long Seefin seems endless, but eventually you find yourself with the end in sight, on pleasant wooded lanes at Rourke’s Park and the final stretch along tarmac back to Carrick Little. I have to say, this final mile, uphill along the road, was torture. But 12 hours and 50 minutes later, I made it back to my car.

Final thoughts? A real challenge, a mental battle, but a great day out in the mountains offering some of the best the Mournes has to offer. A must-do for the serious Mournes hiker. For me, I could definitely have done with more preparation, but it’s been an unusual year for that. Bring a change of socks. And LOTS of sweets. 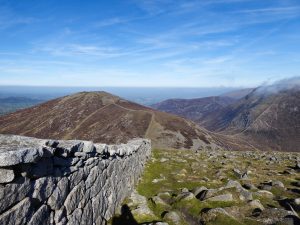 I’m an archaeologist from Carrickfergus, County Antrim. I enjoy long-distance hiking trails and early starts in the mountains. I’m currently ¾ of the way through the Ulster Way and love exploring the nooks and crannies of our rural landscape. I wish I lived closer to the Mournes.