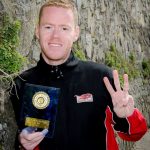 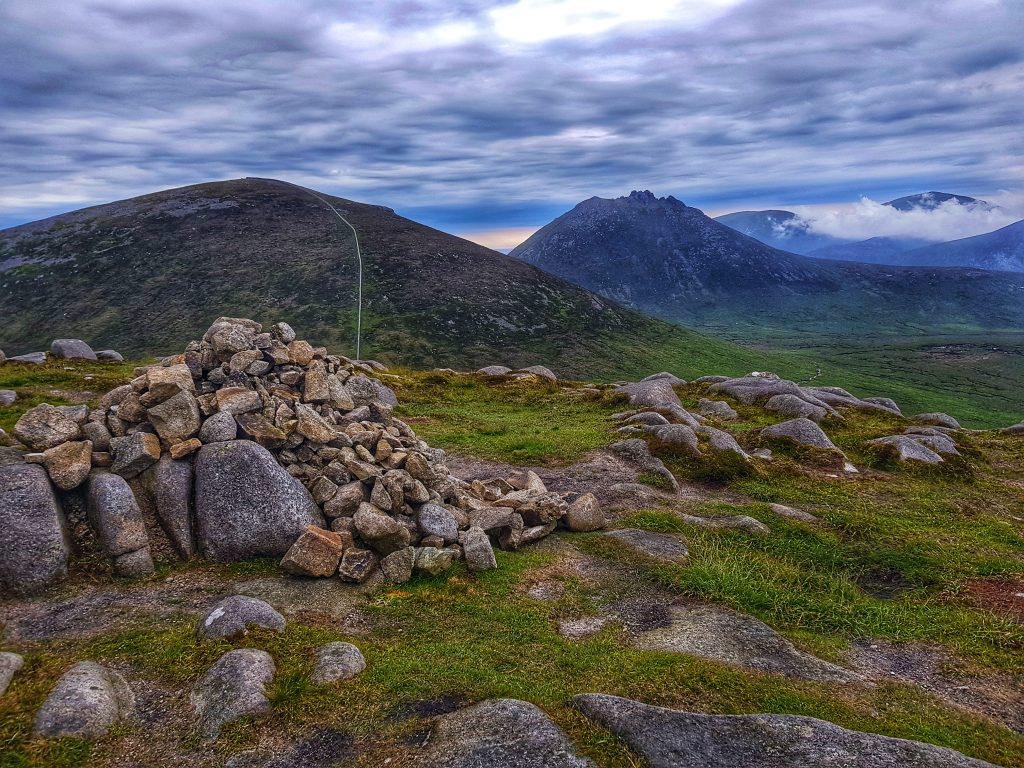 “Fancy writing an article for Trek NI? “ is the message I received out of the blue on my Instagram account, something that I have only recently embraced and started using.

To give a quick background on myself, I am more of a runner than a hiker. Combine that with the enjoyment of taking photographs, I decided a couple of years back to mix them both together. My playground for both of these pastimes is more often than not within the Mournes, whether it be on the lower part via Kilbroney Forest Park with its views overlooking Carlingford lough and the Cooley Mountains, or scrambling up the side of Slieve Bearnagh in the higher Mournes, with your legs burning but somehow loving every minute of it.

However, I decided not to write about this at all but instead about a memorable day in the summer of 2019, when four runners decided, rather last-minute, to go for a walk.

That walk was along the Mourne wall.

Without going all Wikipedia in relation to what this entails regarding all the details, stats etc, a quick synopsis is that the walk itself negotiates 7 of the 10 highest mountains within the Mournes and is 22 miles long. To be honest, it is a tad longer than that if you include the trek to and from the wall from Carrick Little carpark. That’s where the journey began…

We started the walk bright and early at around 7am. Packs were on, tea was flasked, and we set off up the initial trail from Carrick Little carpark. As we hit the gate adjacent to the old abandoned house, we hoped that the weather gods would be in our favour. As I looked towards Binnian however, I could see a crown of clouds on its summit. Not the greatest for any so-called landscape action pics, but no matter. 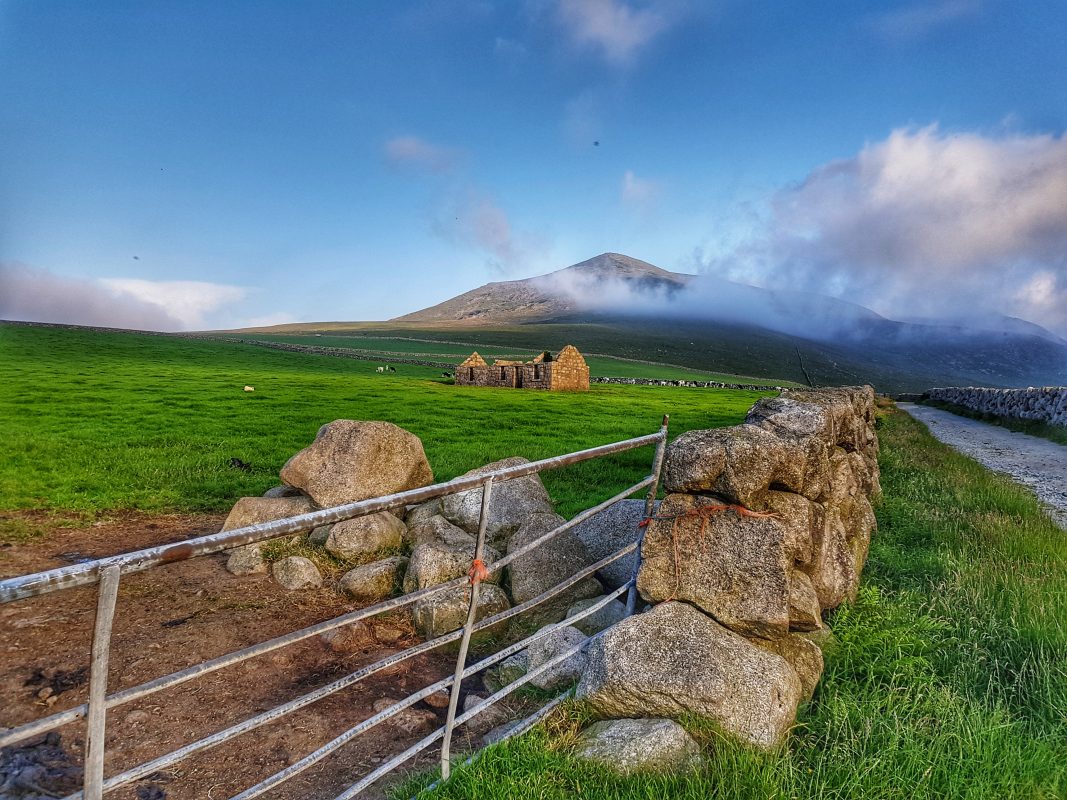 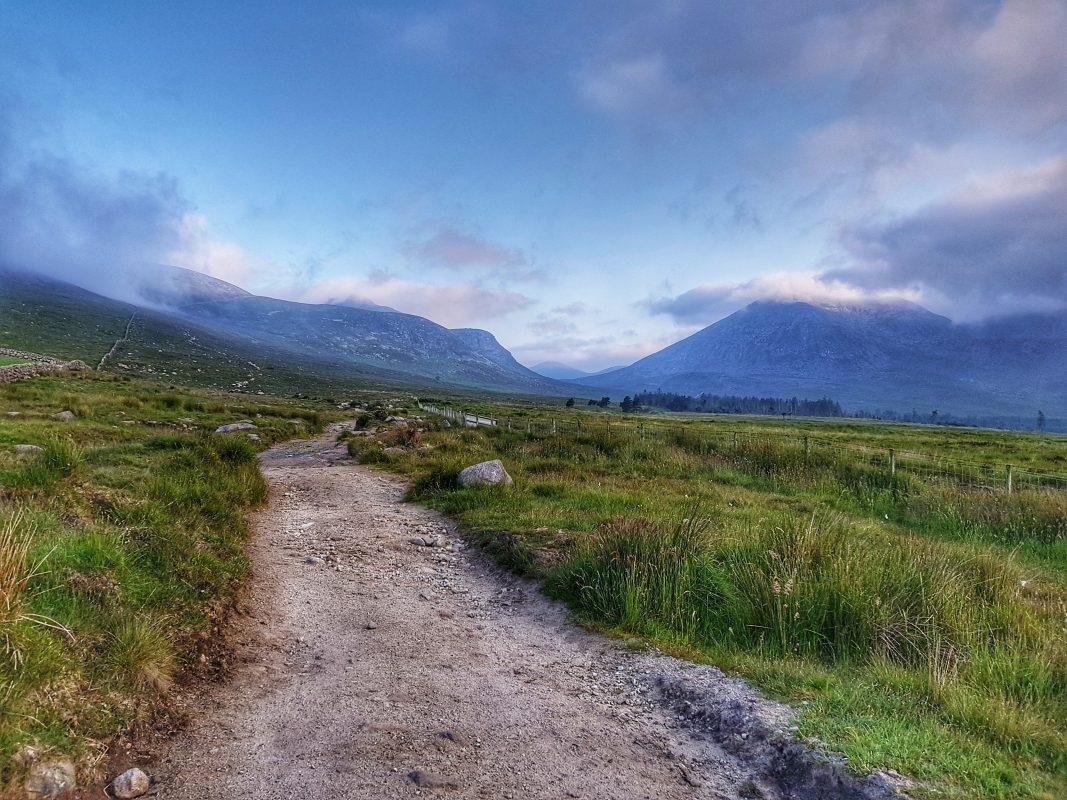 On we continued up the trail veering left along the wall with Annalong Wood to the right of us. In the distance along the valley you could see Donard peeking out over the clouds. I think this was the first realisation from everyone in the group that this was going to an amazing experience but a tough one. No-one said it but I know we were all thinking the same thing.

You can plan as much as you want for this type of jaunt, but somewhere along the line, something will go wrong. We had really only started in general terms, as we were only approx ¾’s the way up Binnian, when one of the guys’ backpacks decided that enough was enough and snapped. After a makeshift fix-up, we didn’t really think much more of it, but later this would eventually seal the fate of the one of the team. 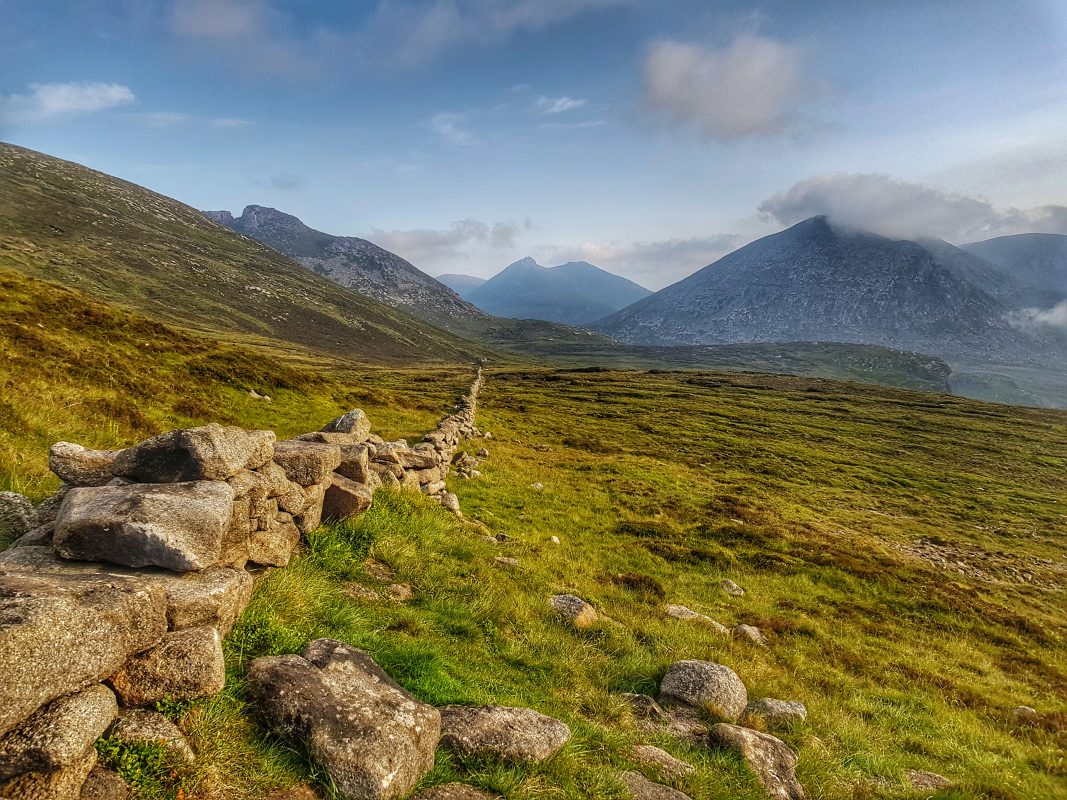 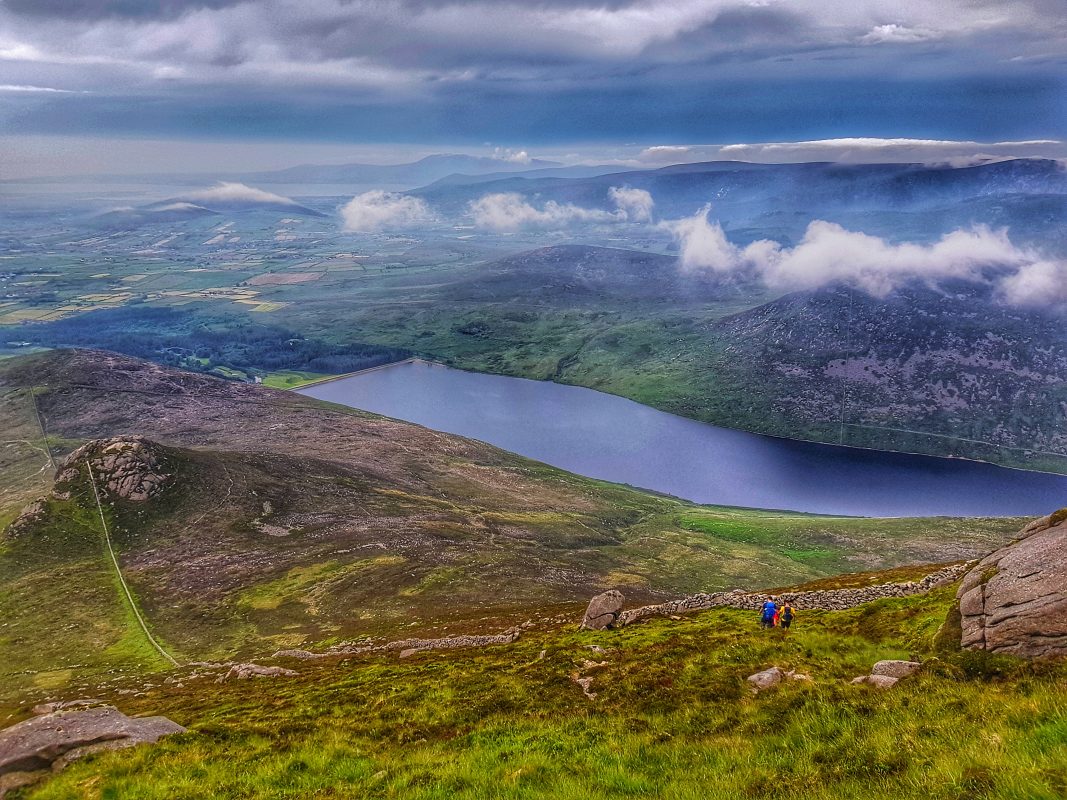 Binnian on a good day is a sight. When we climbed to the summit, the cloud cover remained and we could see nothing! This made the traverse down the side rather tricky but eventually, after a few Cliffhanger movie-type moments, we negotiated on to the correct trail. Ironically as soon as we descended towards wee Binnian, the cloud lifted and allowed us to see the entire Mournes and along the east coast of Ireland. I was slightly tempted to go back to the top, but a few stern looks can be more off-putting than the climb. 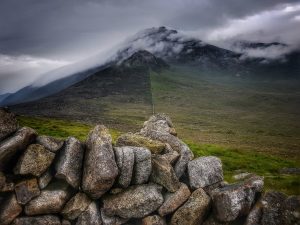 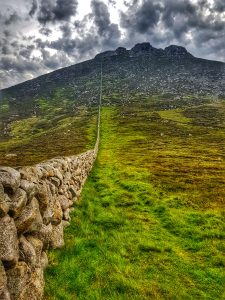 Moolieve followed and then the dip into the Silent Valley, crossing the reservoir to start the next climb up towards Slievenaglogh. Probably the one mountain you don’t expect to be tough or indeed that challenging but after navigating a marshy bog on the way, nearly losing a boot or two and the unexpected sharp incline, it quickly zapped the energy of us all.

Thankfully, the weather up to now was kind, mainly cloudy skies with little to no wind. However, over the next couple of hours it would change into the spectacular, as a mild overcast morning turned into thunderstorms with hail and lighting. 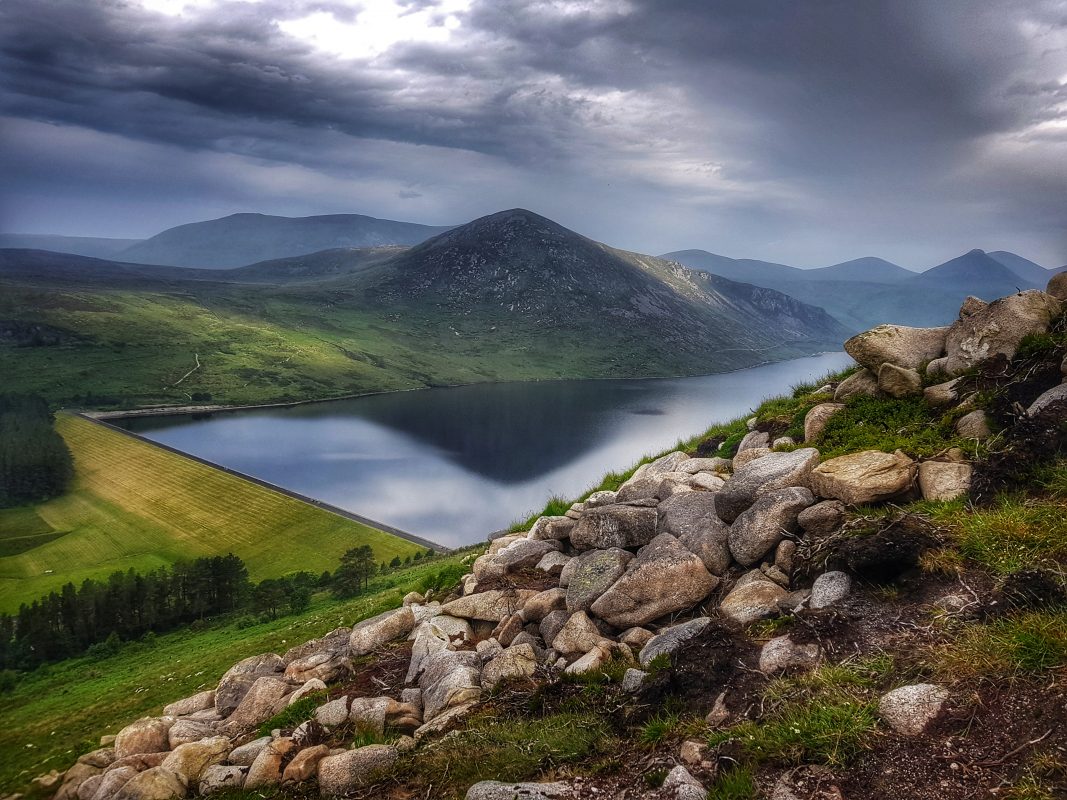 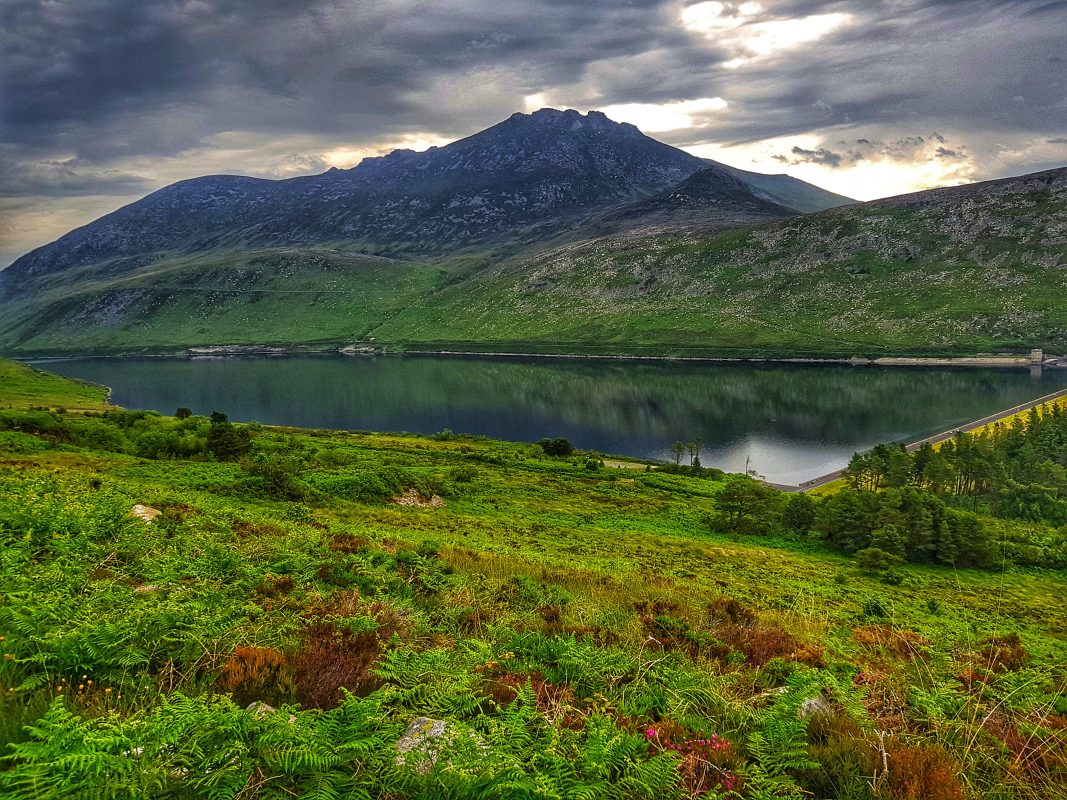 As we crossed the Loughshannagh trail to make our way up towards Slieve Muck the party of 4 would become 3. The first aid we had attempted on the backpack didn’t hold up and rather than risking it with only the provisions we had, he had decided to call it a day. With only a quarter of the journey done, probably a wise decision. Good news for us though as we stole all his water and sweets!

The climb up Slieve Muck was memorable as it was tough, as the thunder and lightning in the distance put on a decent show, echoing through. Reaching the top stile at Muck we were greeted by a lot of familiar faces – a trail race was being undertaken on the same day. The usual cheeky ‘what are you’s doing walking?’ comments from a few running mates came our way but for once, as we looked across the Mournes whilst eating our lunch, we didn’t care – in fact you felt a million miles away from all you cares and worries. 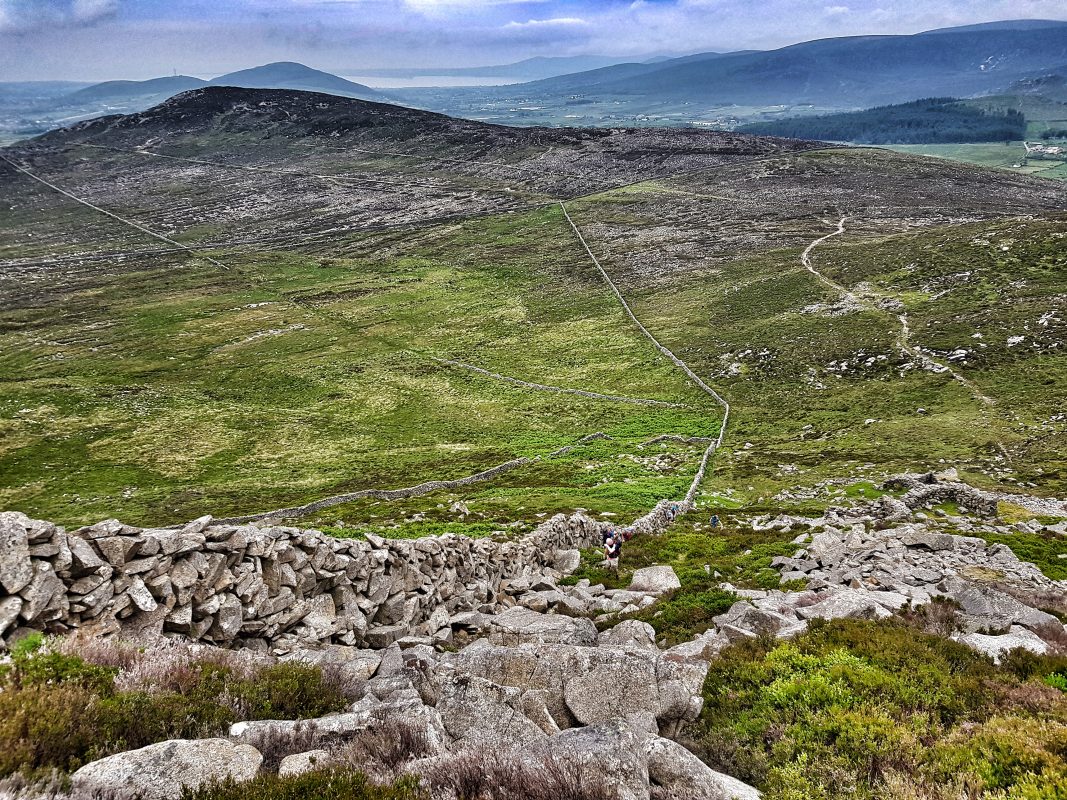 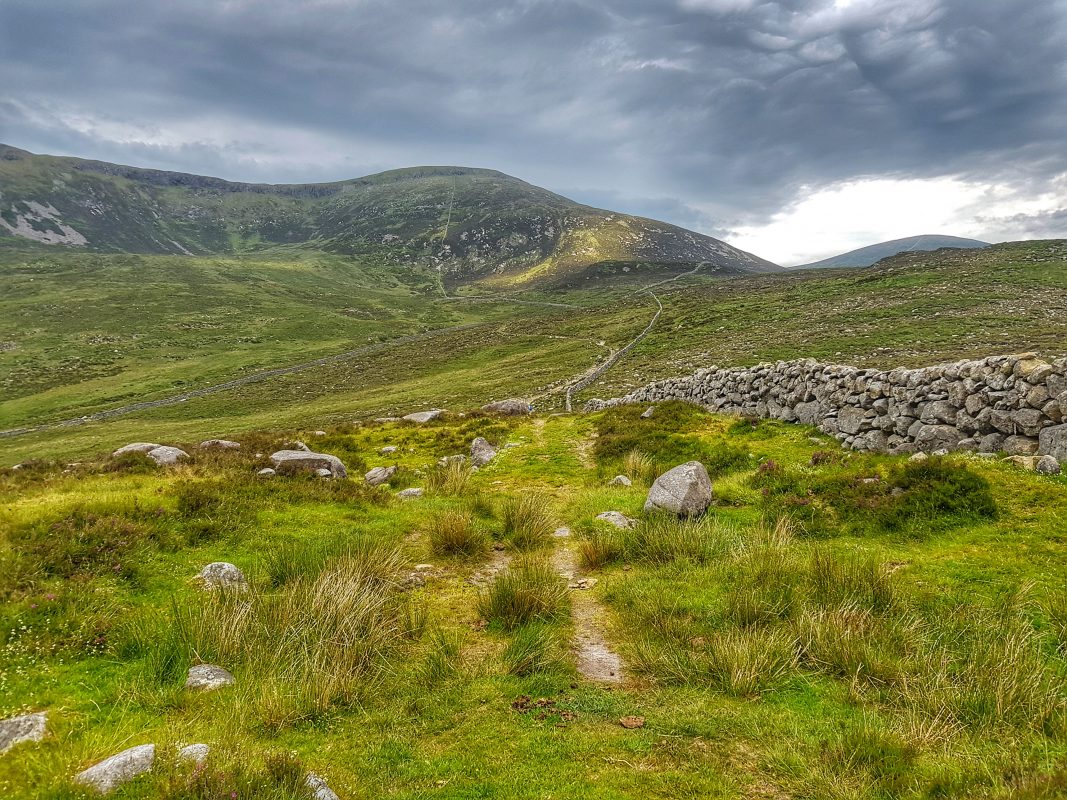 The rumbles of thunder subsided and the wet gear came off as the hail stopped, and thankfully the remainder of the day was mostly sunshine with a gentle breeze. Carn and Loughshannagh quickly followed and if anything at this point, we had a skip to our step, but we all knew that the tougher peaks were still to come. 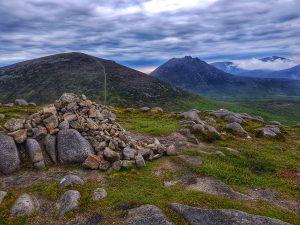 Throughout the day we met plenty of small groups too, all doing the same or similar challenge, but as we neared the steeper climbs many of those groups faded away, heading to Meelmore Lodge instead, as they found either found the challenge just that little bit too much or they got what they came for. Still no sad faces, just smiles and the knowledge that a pint of Guinness would be there when they finished. 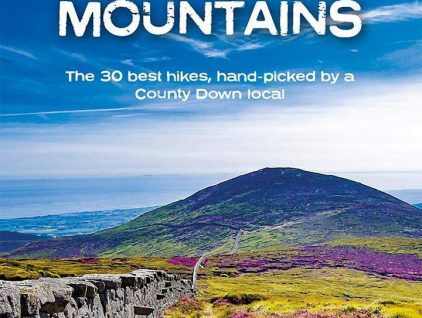 Meelbeg and Meelmore came and went but Bearnagh was looming. Probably my favourite mountain in the Mournes, but after the tough descent from Meelmore burning the quads, I knew it would be unforgiving. No complaints from any of us though, due to the moody clouds and stunning scenery surrounding us, so we reached the summit of Bearnagh gradually and as always, the views never disappoint. 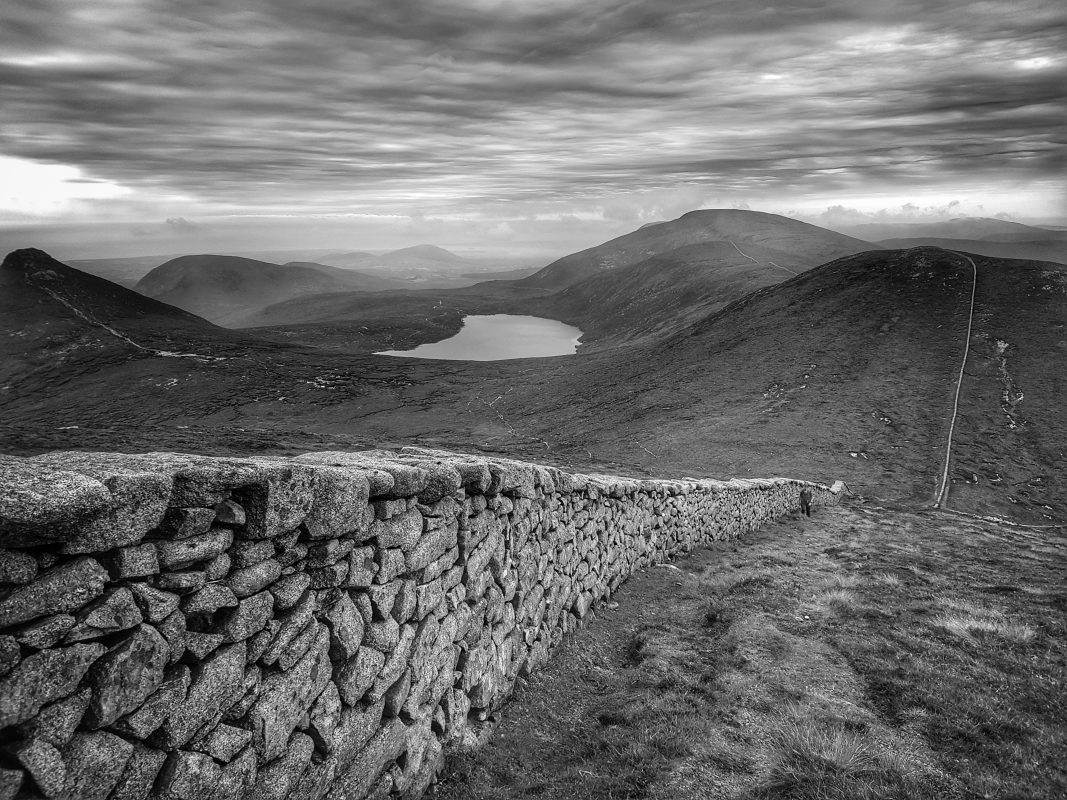 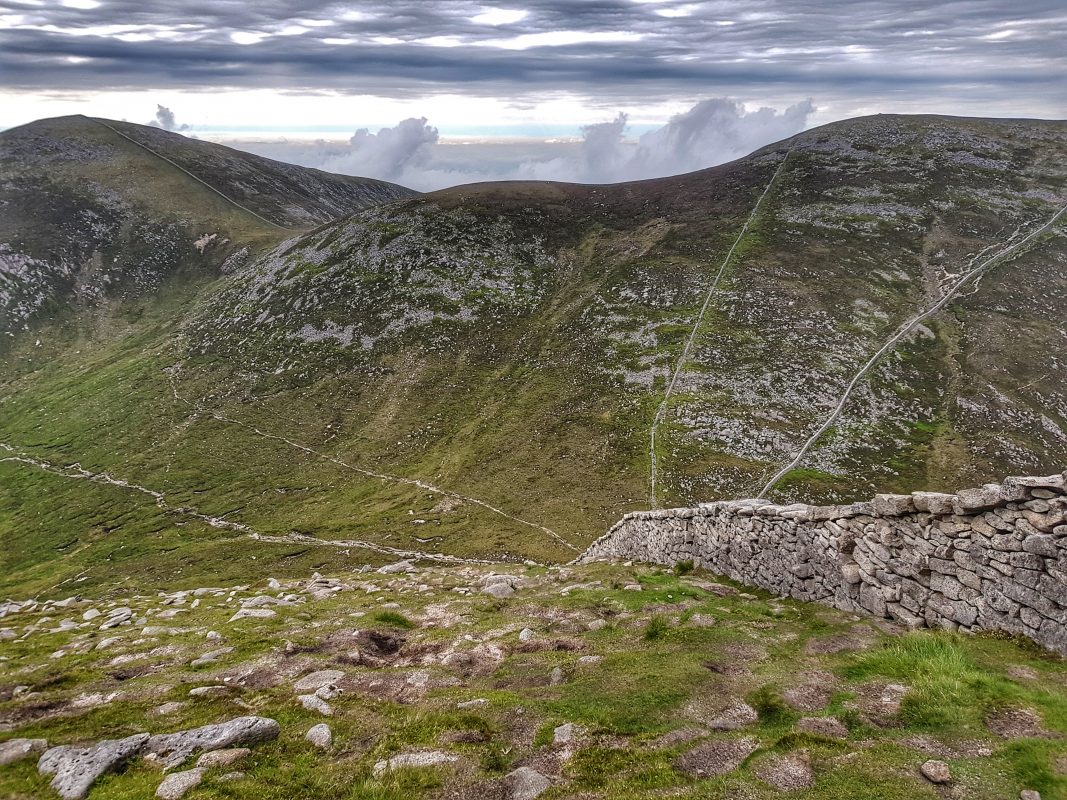 As we gazed towards Ben Crom and the Silent Valley, photographing the distant mountains we had just crossed, I think we all knew that nothing would stop us getting back to Carrick Little. Quickly, the tiredness in the legs faded and we made our way down to Hares Gap, continuing up to the second mountain in the Mournes that is named Slievenaglogh, briskly over Corragh and on to Commedagh. 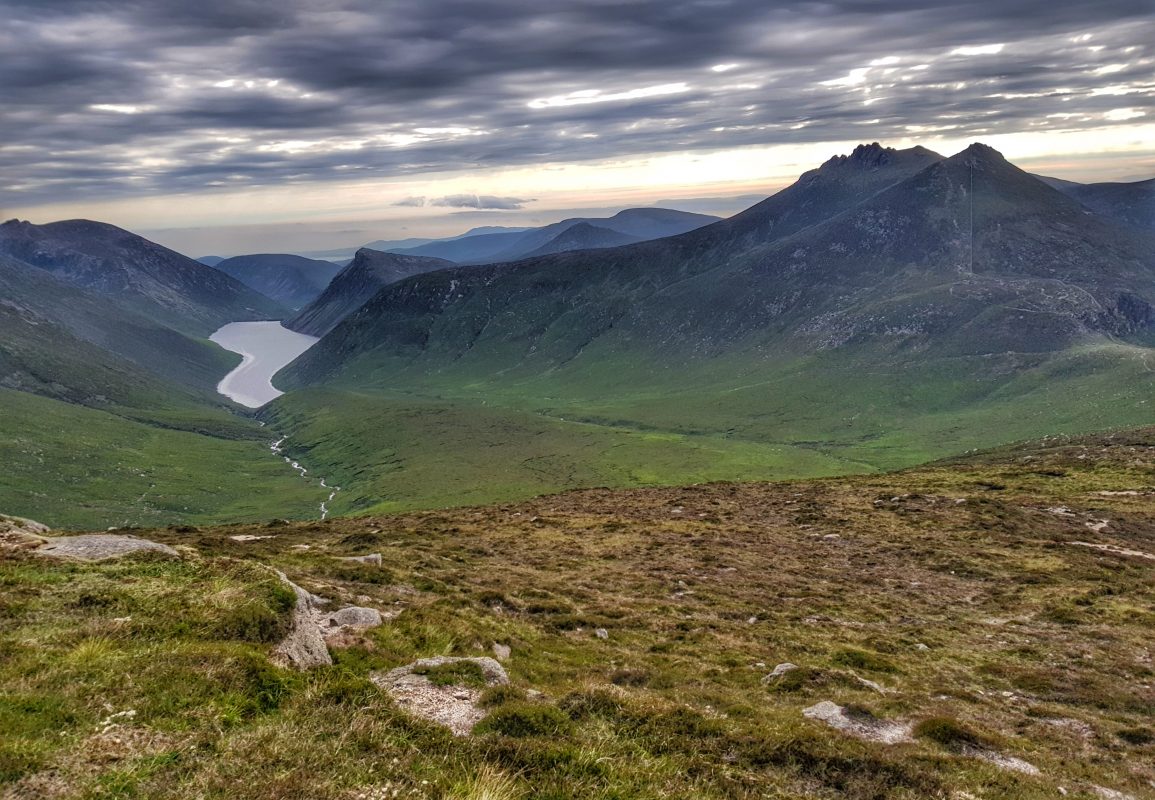 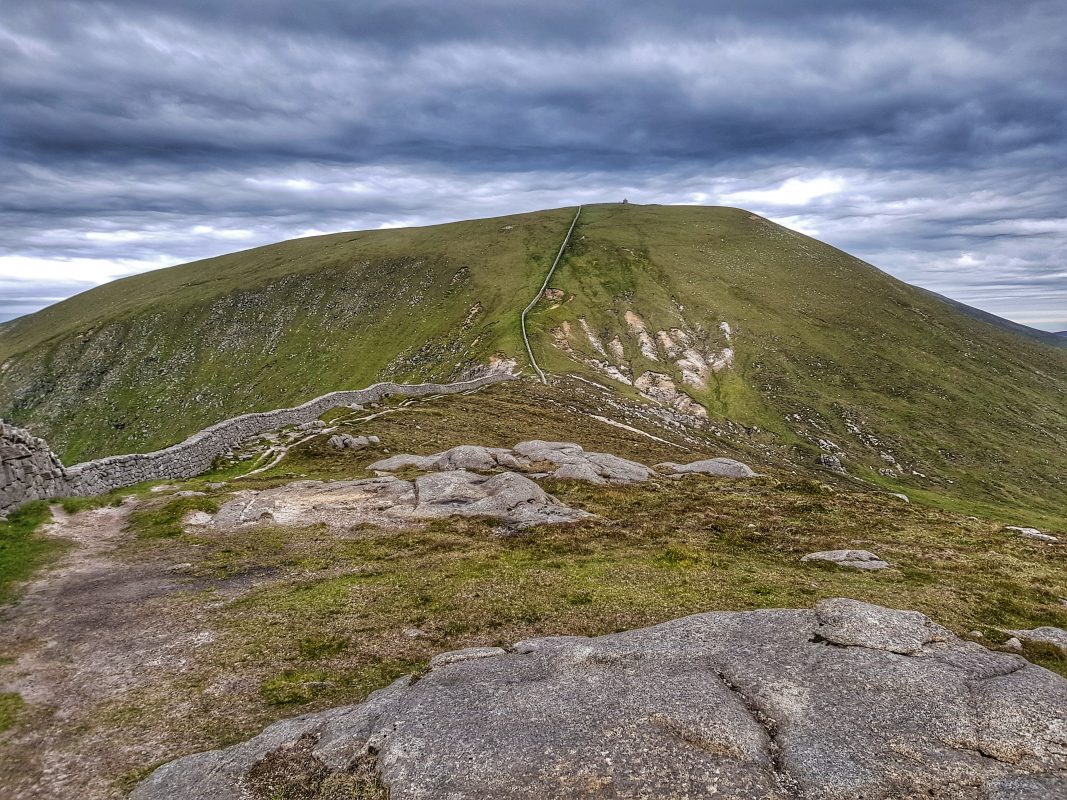 Only one real tough climb to do at this point. However, it wasn’t the ascents that were starting to be a small issue, but moreso the descents that were affecting the legs and feet. By the end, I did have a few black toenails as keepsakes.

As we climbed Donard, I must admit I remember saying to myself, out of all the mountains in the Mournes, this might be the most uninteresting of the lot. Yes, it may be the highest, but I had the feeling the guys agreed as no sooner than we reached the top, took a quick photo, we were on the march down towards the aptly named Bog of Donard. 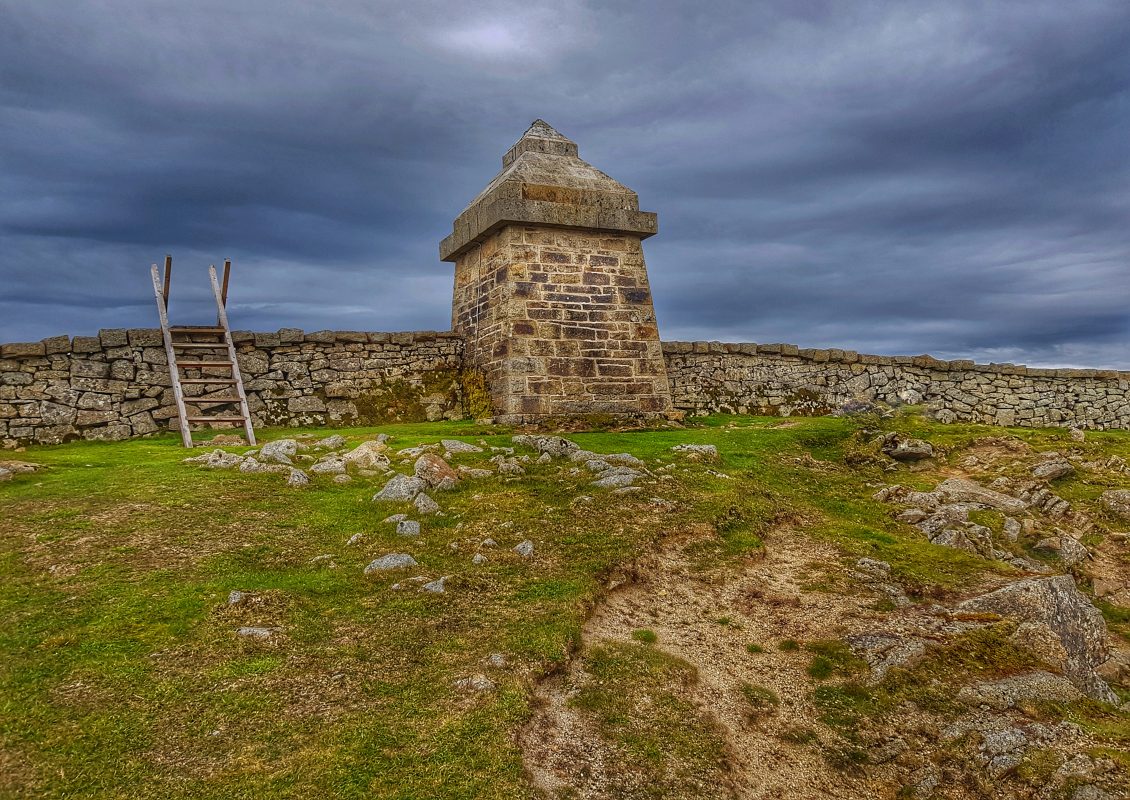 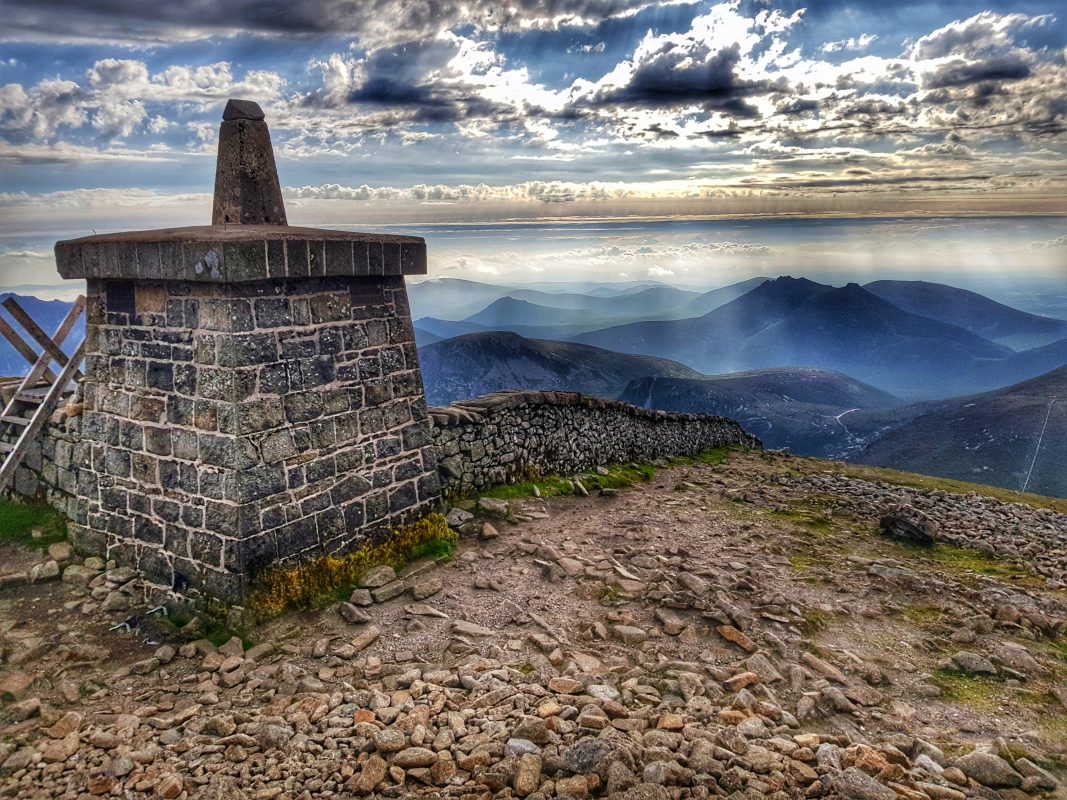 At this point the sun was out in force and the evening sunlight was welcome. Visibility was perfect, Chimney Rock to our left and Rocky towards the right with the Mourne Wall just stretching out in a perfect straight line towards the Irish Sea.

With all the major climbs behind us, this was the part of the journey I wasn’t looking forward to right from the off. Looking back now, it was probably my favourite part overall. We took our time, enjoying every moment as we walked towards Long Seefin making the sharp turn right into Annalong Wood, finally seeing the end of the seemingly-infinite wall, and into the wood itself.

Instead of heading back to where we started, we ventured out to the main road from the wood taking a right back towards Carrick Little were we had started just over 12 hours ago. We had it in our heads at the start, that if/when we finished, we would all head out for a few celebratory pints but as we saw the cars, we reflected on the day and said maybe a bite and bed would be a better idea.

Before I started I made the decision that I would collect a stone from every mountain that we crossed. Yes, this might not have been an official challenge. More a spur of the moment adventure for four lads who normally run races rather than walk, but I am thankful now that I did make this decision. They are only stones, but they will always remind me of a brilliant day with good friends among arguably some of the best scenery this country has to offer. Better than any trophy  I have ever won to be honest.

However, when I suggested we run it next time, I don’t think it went down too well…… the stern faces returned!

So whats next? The four of us are going to do the 5 highest peaks in the UK and Ireland over 4 days. Sure why not?!

Runner, hiker, adventure racer with a joy of taking pics. Enjoys anything challenging from 5kms to 100kms. In 2011 broke the Guinness World Record for a 12-hour run on a treadmill. Next challenge: 5 highest Peaks in UK and Ireland in 4 days for Down Right Brilliant.