A Summertime Trek up Cuilcagh 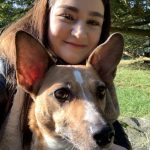 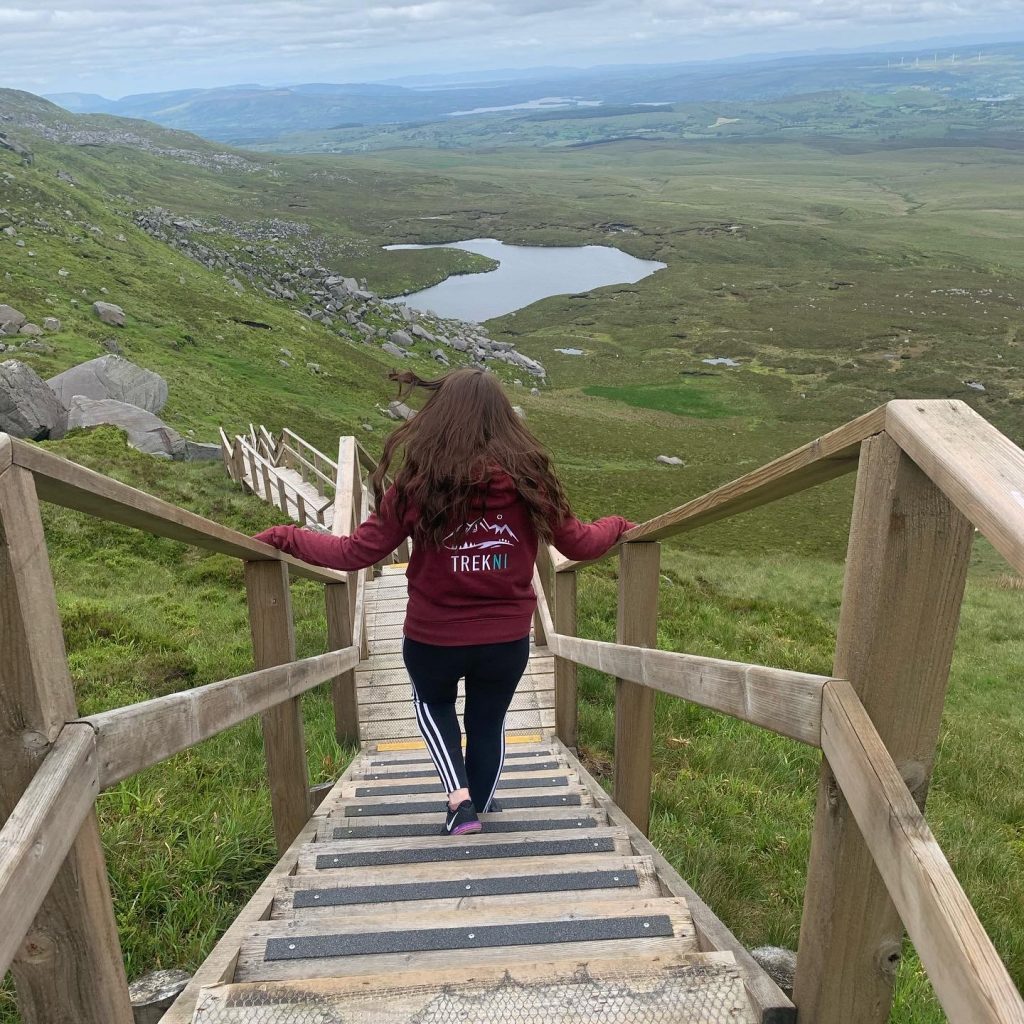 School is officially out for summer and despite recent media reports to the contrary, teachers have been flat out. I have been making YouTube videos, messaging children and parents, making or adapting resources and I’m pretty sure Google Classroom now owns a little bit of my soul. After two days of sloth mode and binge watching TV I begged Scott to go with me to Cuilcagh with the promise that the weather would be good. 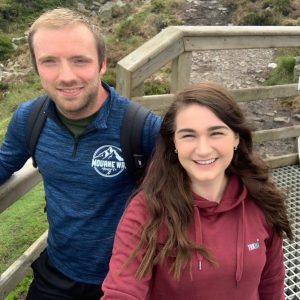 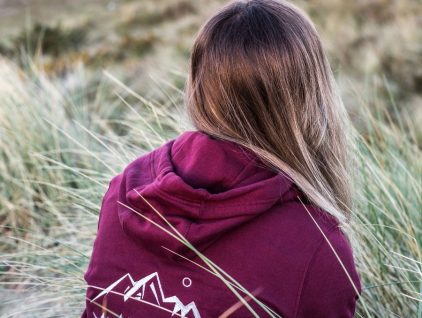 I’ve only done Cuilcagh one other time before (it was a mercurial day where it was sweltering until we got to the top and then magically decided to rain – thanks good ole NI weather) and honestly I enjoyed this time much more. This is perhaps something to do with the fact that this time there wasn’t a giant BBC News camera capturing my out of puff face as a reporter investigated tourism and the impact on the boardwalk. Cue me hiding behind people and internally cringing at my ‘luck’.

We left home early(ish) in the morning and when we arrived in the car park it was practically empty. We were told by a friendly chap in a high vis that it cost a rather reasonable £5 to park and we could go to the first car park where it would be approximately 11km, or travel to the next car park where it would be roughly 8km. Not feeling too adventurous, we went to the one which was slightly closer to the boardwalk.

Some reviews online had claimed you need proper hiking boots as “trainers just won’t cut it” and I was a bit sceptical about ignoring their advice and forgoing my heavy mountain boots. Everyone is different and some people maybe do require some more support on the rocky trail before you reach the boardwalk, but I think my trainers were fine and honestly I think my mountain boots would have been cumbersome… but they are the more wintry calf ones as opposed to the dainty ankle ones. 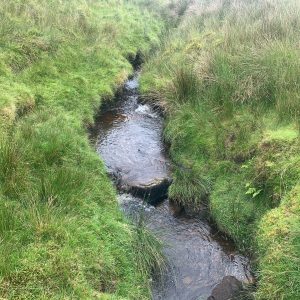 Disclaimer: it’s actually a fair jaunt until you reach the boardwalk. A fair jaunt that I really enjoyed, taking in the pretty surroundings of one of the largest blanket bog expanses in NI. The bog cotton is sparse as spring makes way for summer and the pops of white make way for the deep purple hue of heather and the moor grass, but there’s still plenty to see. Scott and I enjoyed taking in the sites of birds flitting about and trilling at the top of their lungs… but don’t ask me if any of them were the golden plover which is apparently one of the reasons why Cuilcagh has been given conservation status. No merlins in sight either – shame really – my dad would have been impressed if I had managed to see a falcon. Also dotted about the expansive rugged landscape were some sheep nestled on rocks or hiding in the long grass and enjoying how peaceful their grazing ground was. 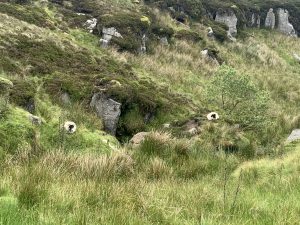 If you keep your eyes peeled for them, you can also spot remnants of old Irish farmhouses from years gone by, which the mountain has reclaimed for its own.

Just before the boardwalk makes way for the steep ascent up the mountain, there is a giant rock off to the right which has a boardwalk path and a little plinth to sit on which is perfect for stopping for a cuppa before you tackle the famed ‘stairway to heaven’. I think it would be ideal for families especially for those with small children, who we saw on our way back down the mountain indulging in a picnic and a quick rest. 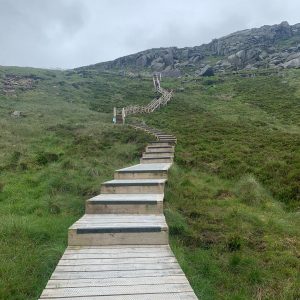 The steps are steep and being significantly less fit than Scott, I did lose my breath quite a bit in some parts where it became particularly steep. That being said, it didn’t take us long to get to the top once we finally reached the steps, even with frequent stops to soak in the amazing views and catch our (my) breath! I’d say that unless you suffer from vertigo or are terrified of heights, the walk to the steps is worse than the steps themselves.

Overall, the steps are manageable, with handrails to help you hoist yourself up if you’re struggling and flat viewing platform ‘walkways’ in between the sets of steps. I am not a physically fit person at all and I found it to be moderately challenging. The effort was worth it when we got to the top and there were only about four people soaking in the atmosphere. You actually don’t realise just how high you’ve climbed until you’re at the final viewing platform and looking down at all the ant sized figures below! The visibility was amazing and the weather was perfect: warm but overcast so there’s still a light breeze and no oppressive sun. Negative: I was falsely told the signal would be pants… I can confirm that this was a lie and I still managed to get Google Classroom pings to tell me my form class were completing their summer enrichment activities. See previous comment: Google Classroom. Soul. No escape. 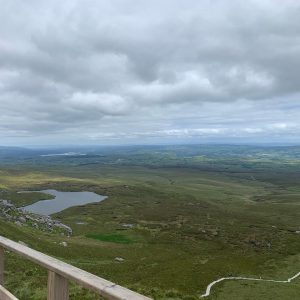 It was a bit hard to believe that the boardwalk gets an estimated 60,000 people a year when there were so few people around on our way to the top, a blessing really, as on our descent the foot traffic was increasing and it was tough enough to socially distance on the boardwalk, which allows you to walk two abreast in some parts and single file in others! Stepping off the boardwalk is a big no too, as the boardwalk is there to try and conserve the bog and the fragile ecosystem it supports. 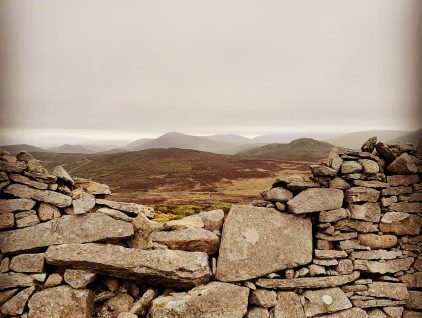 READ: Emerging from the mist: how nature can help us as we step out of lockdown

The increased foot traffic allowed me to people watch though, and observe how there were people of all ages and fitness levels tackling the mountain and everyone was enjoying the challenge as jokes and hellos were interchanged as we passed each other. Don’t be too quick to write yourself off as too “unfit” to even attempt it, tiny toddlers were there attacking it with zeal! Kudos to the dad who was carrying his baby like a rucksack and trying to keep the same pace as his Mrs! If you do go and find you’re not confident with the stairs though, you can turn back before you get to the stairs and you’ll still have a decent walk under your belt! 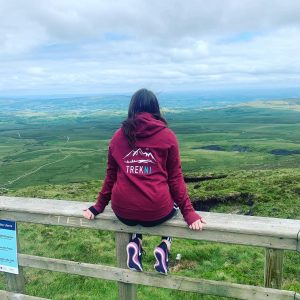 It took us 2 hours and a bit to complete it, even with a stop for some tea and fresh fruit from Scott’s mystic backpack: provider of sustenance.

My top tips for visiting Cuilcagh:

Naomi Davidson is an English teacher and part time rambler (both in talking abilities and in the walking sense of the word). She loves novel-worthy forest parks, moody mountains and walking her dog along Murlough Beach.

Armed with her trusty phone, she snaps amateur photographs of the landscape and dabbles in writing about her experiences. Her favourite places to visit are the National Trust properties dotted about the country.