The Old Track up to Mullaghclogha 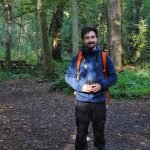 Simon recently followed the old track to Mullaghclogha in the Sperrins. Here’s how he got on…

I took a Friday off back in August and even though my job has me out in the countryside all the time trudging across bogs I still feel the need to head out into the hills when I get a chance.

I’d seen a rough track on google maps that led up into the western end of the Sperrins and I had to go and see what it looked like on the ground. 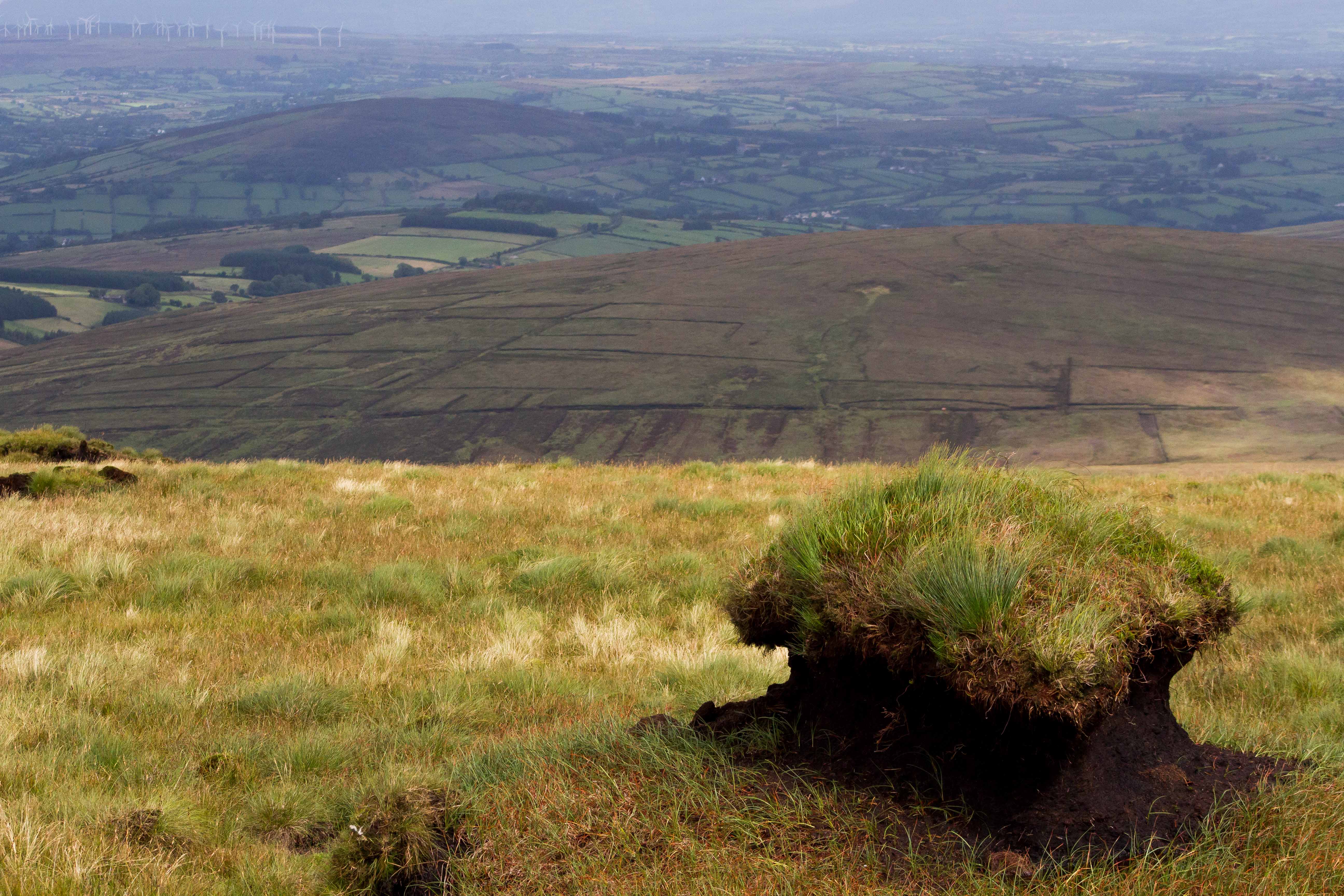 I found the road just west of Park and followed it until I couldn’t get the car any further, tucked it into the verge and started walking up the track. As I made my way up the sheep stared at me curiously. There are probably not that many people for them to come across up here. After a few hundred yards I could see a river following the line of the track and making its way up the steep slopes of Mullaghclogha. 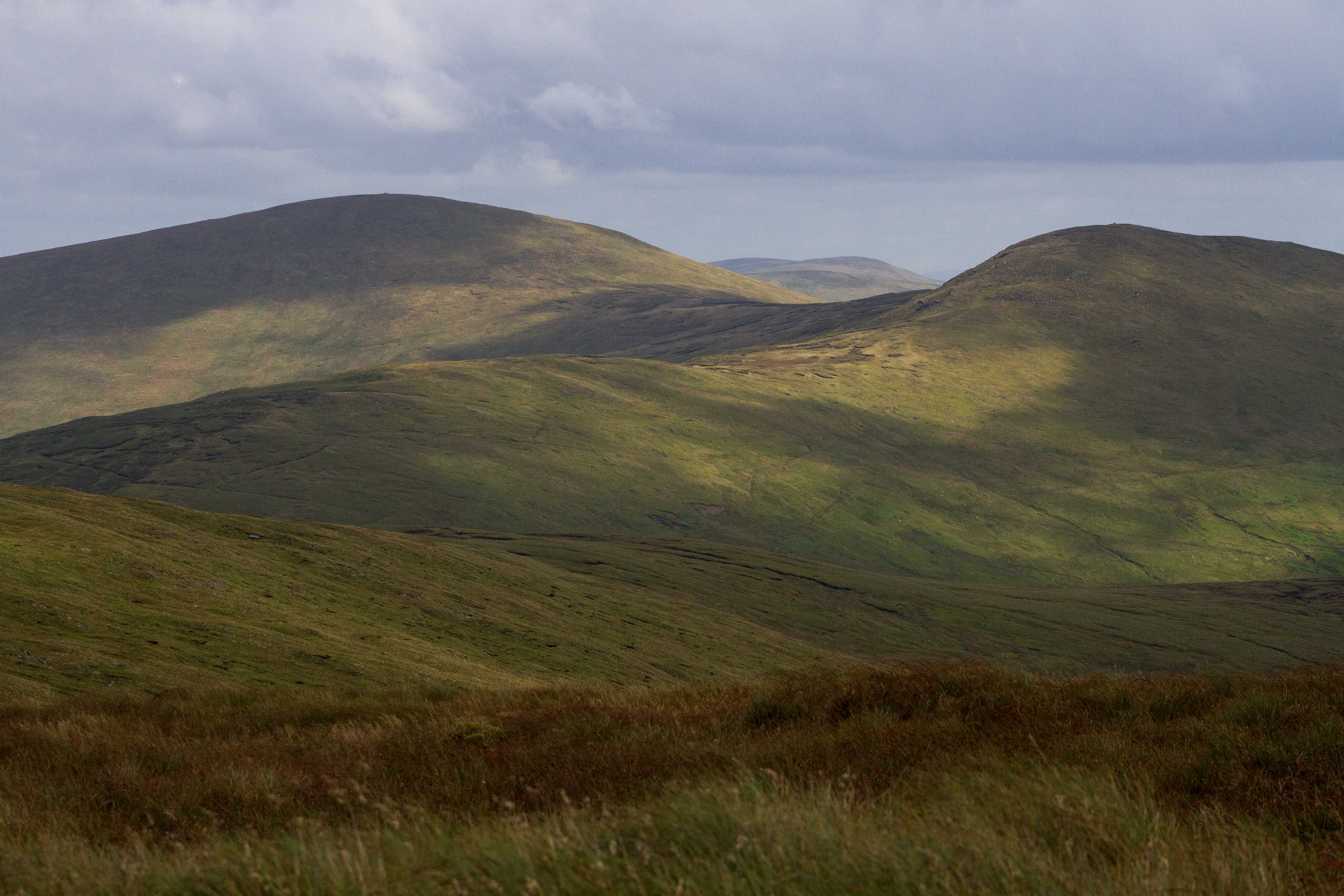 The track led up to a house that had long been abandoned which sat on top of a green knoll set against the weathered hills in the background. The only trees in the landscape surrounded the old dwelling, necessary shelter from the bitter winds that are commonplace up here. It just made me think of what it would have been like to live up here and how hardy those folks who did must have been. 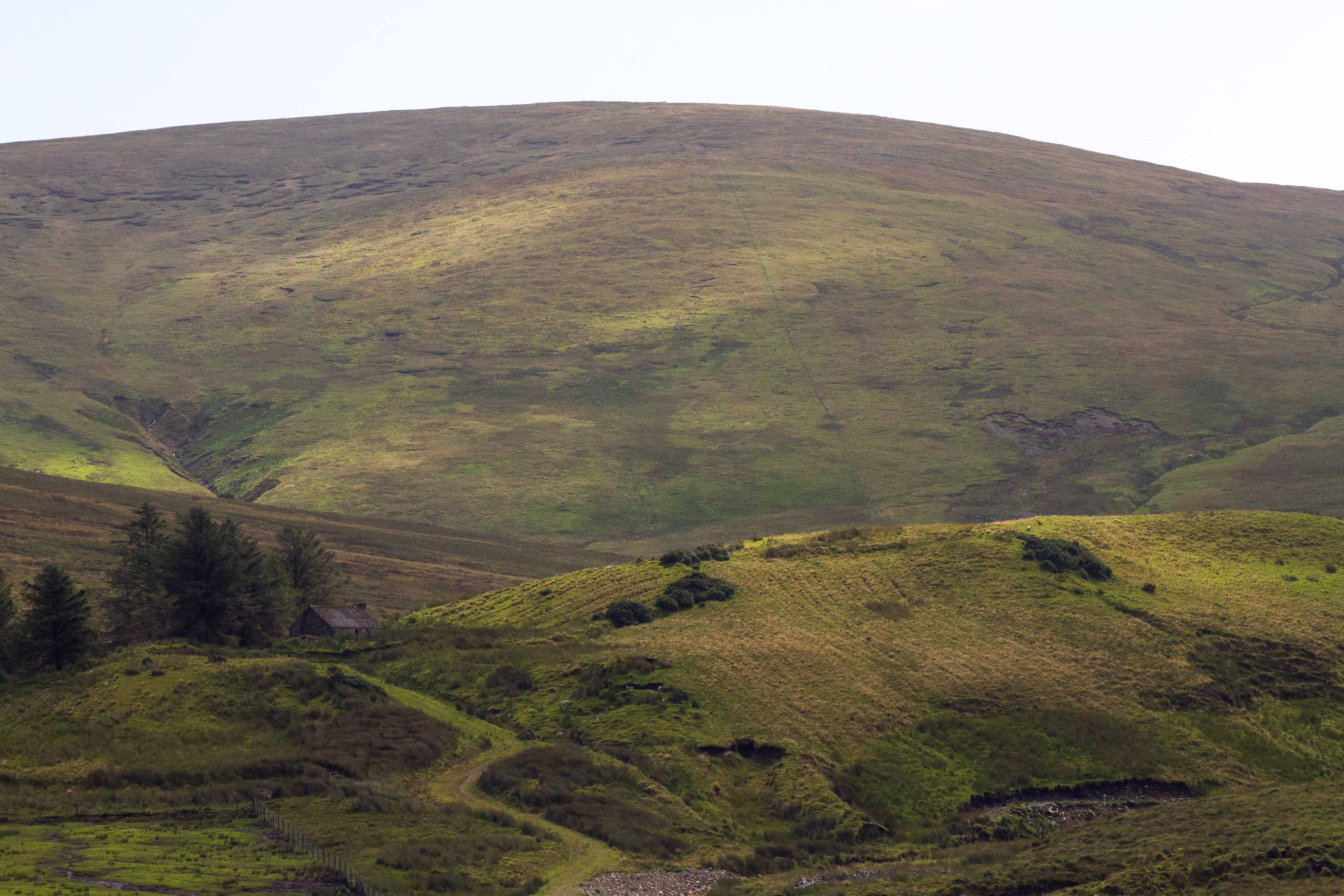 Before I reached the house I veered off to the east and headed up the shoulder of the mountain making for the top. Deep heather and thick mounds of moss made for tough going and the odd drain to jump kept me on my toes. Turning round every once in a while I as greeted with unhindered views to the north and west. To the north the sun broke through to shine on Tornoge Hill while the hills around Derry and the mountains of Inishowen sat under the dark clouds that were heading my way. 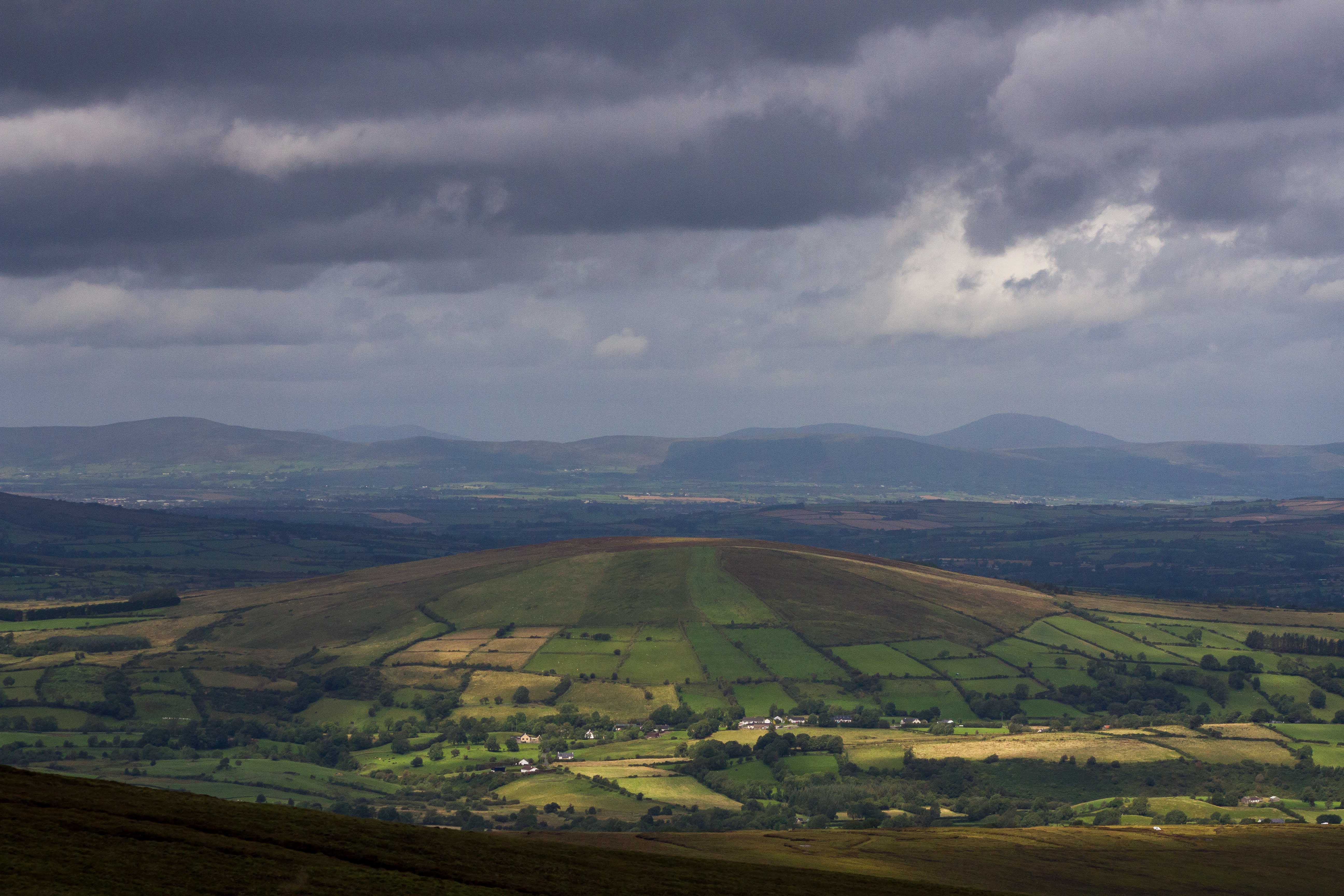 As I got closer to the top I could finally see to the north-east and the unmistakable silhouette of Binevenagh stood out behind the massive wind farm on Altahullion. 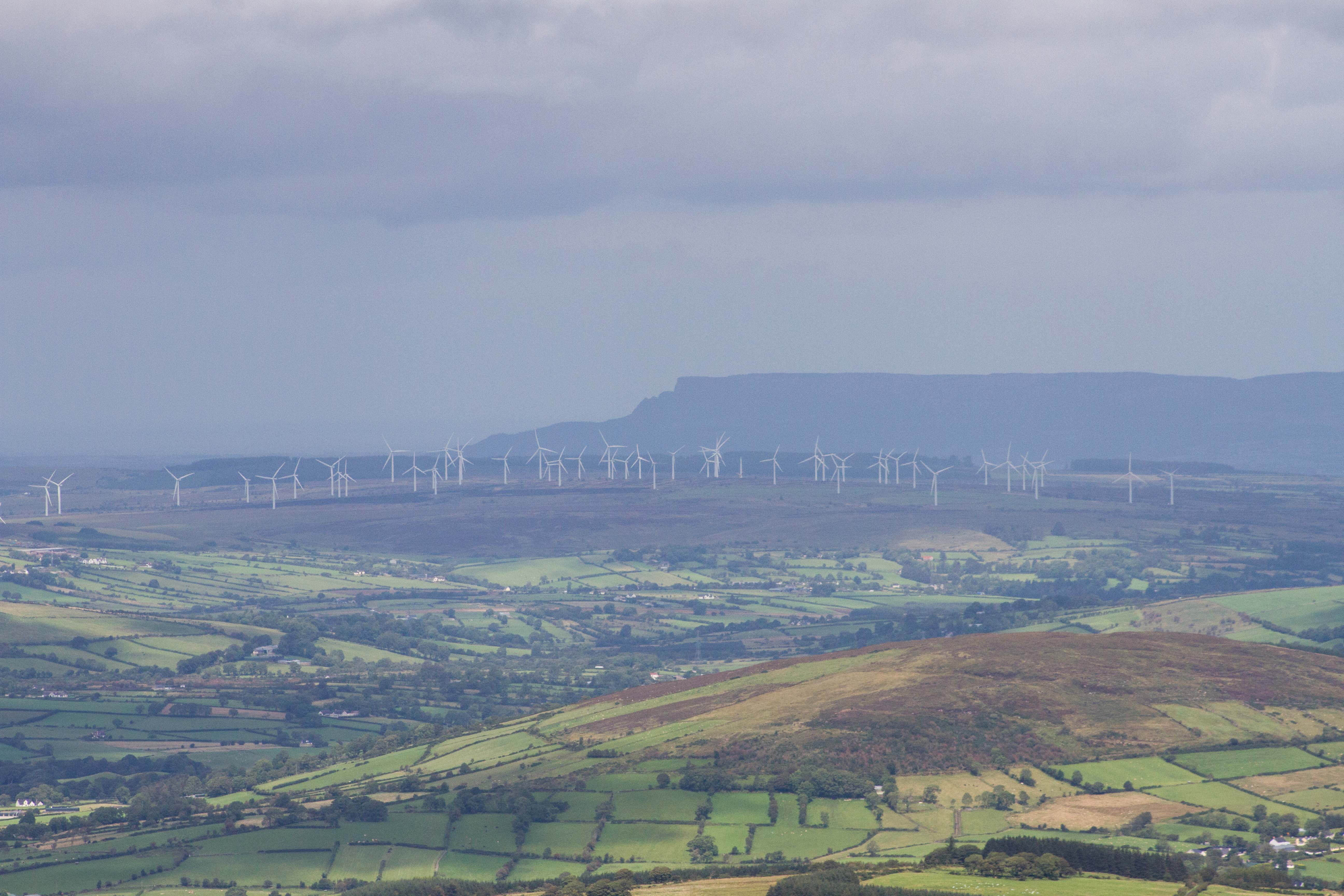 After a final slog through a maze of peat hags and wet flushes I reached the summit. I had a cup of coffee and something to eat and took some photos of Dart and Sawel, the highest in the Sperrins. As I was standing still the vegetation a few yards in front of me rustled as something moved through it. Suddenly a fox came out from the cover and stopped still as it caught sight of me. It stared for a few seconds before darting away down the far side of the hill. Before disappearing completely it stopped and turned to check I wasn’t following which was just about long enough for me to take a blurry photo. 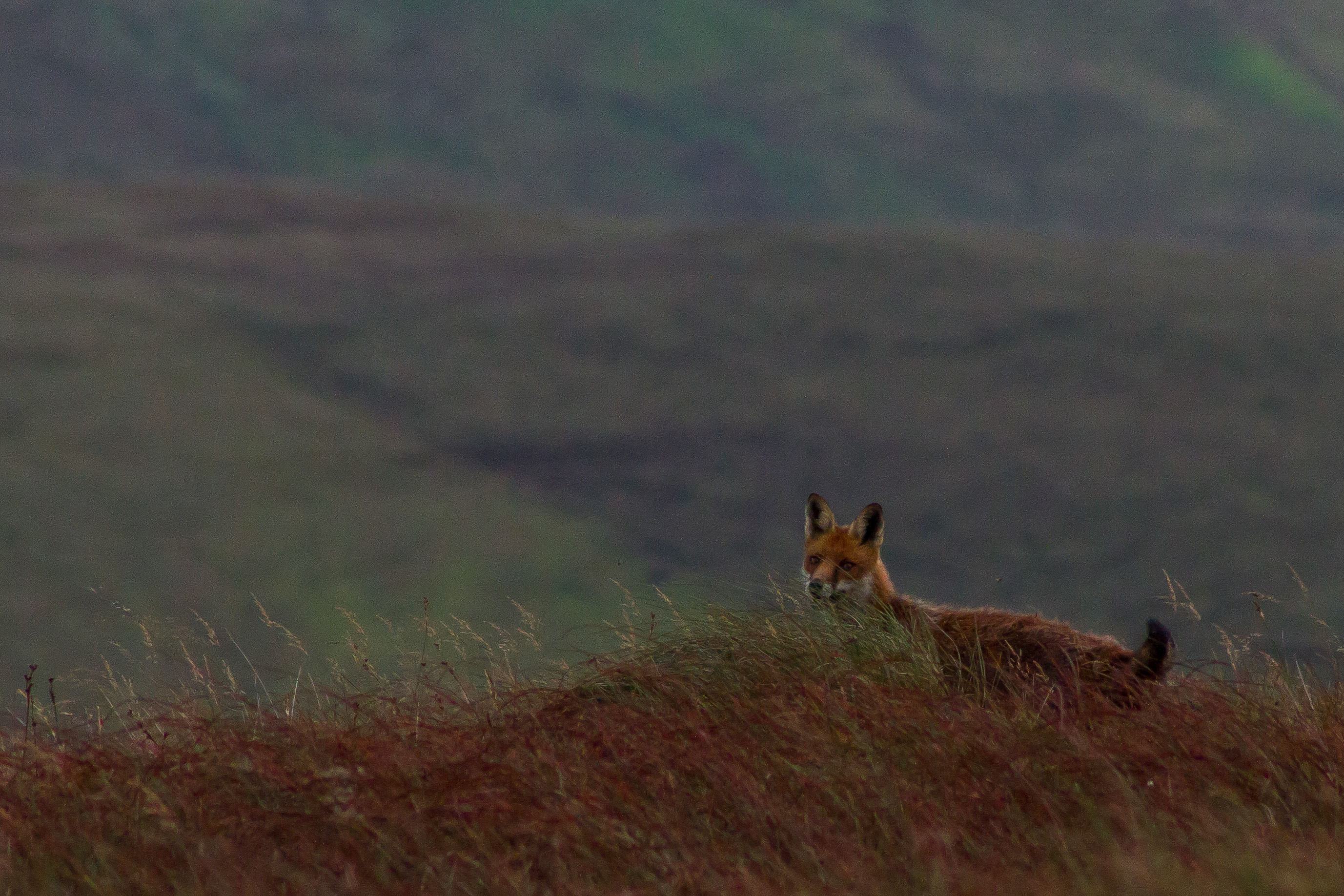 Highlight: Abandoned house at the foot of the valley and views out to Donegal