A Boot and Book Test Drive in the Western Mournes 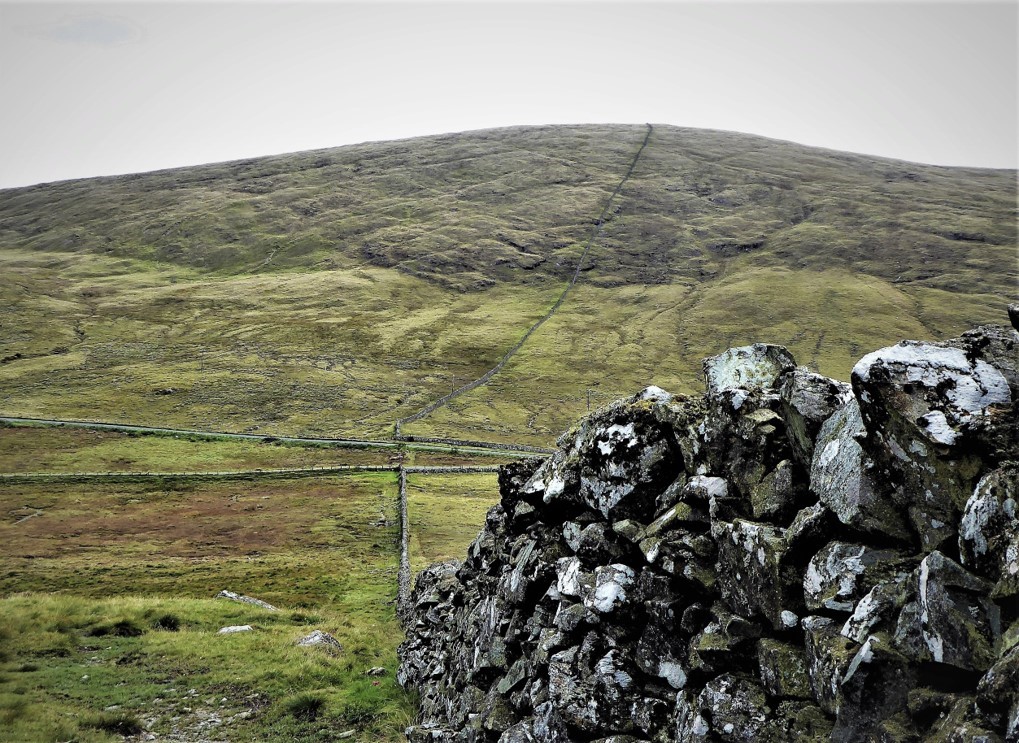 I recently acquired two new additions to my walking armoury – a new pair of boots and a new book, The Mourne Mountains, ambitiously subtitled the 30 best hikes, hand-picked by a County Down local *. Anxious to test them, I selected a walk that would provide a tough test for both without overextending either. The boots were Meindl Bhutan and the walk, Pierce’s Castle and the Rocky Ridge in the Western Mournes.

The walk began and ended at Leitrim Lodge car park. Leaving the car park by the gate facing west, I crossed the bridge over Shanky’s River and followed the obvious path towards the mountains.

After about 200 metres I turned right at a junction of paths, forded a stream over granite slabs and followed the path indicated by the Mourne Way sign heading south.

The Mourne Way is a 26-mile path from Newcastle to Rostrevor along the foothills of the mountains avoiding any challenging gradients with the exception of a jaunt up Butter Mountain. The day’s route would follow the Way south for another 4km before branching off to the north-east.

After a pleasant 1.5km skirting the unusually well vegetated slopes of Altataggart, the route passed a mass rock opposite a small pine wood. The path then dropped down and crossed a stream, although the Mourne Way waymarker mentioned in the book was not present – I later found it broken and prone behind a rock, presumably laid low by beast or machinery.

The track became quite narrow and rocky as it rose gradually uphill but soon widened and flattened out before descending to a gate and stile after about 1km.

The next 2.4km were completed on a gravel forest track making for very easy walking. Looking up to my left, I could make out an impressive mass rock marked by a cross on the steep, forbidding slopes of Tievedockaragh.

On reaching a junction of paths near an attractive footbridge over the Yellow Water River, it was time to bid adieu to the Mourne Way.

Turning left and avoiding the bridge, I made my way uphill with the Yellow Water River on my right for about 300m to a meeting of tracks.

Taking the main path which veered right, I headed further uphill for about 600m and veered left at the next junction of paths.

Following the book directions, I keep a lookout for a grassy path to the left. The path appeared after about 300m followed by a footbridge, gradually making its way soggily through the trees aided by several small boardwalks. After a further 700m, trees gave way to open ground bounded by a partially trampled sheep fence.

Once past the fence, a fairly clear path took me gradually 1km upwards over the rough, grassy, somewhat muddy surface to Batt’s Wall.

Narcissus Batt, a wealthy Belfast banker and landowner, bought the Leitrim Estate in 1834 and built the wall running from Tievedockaragh to the summit of Slieve Muck to mark the boundary of his estate. He was also responsible for Batt’s Wood, the mixed plantation on the slopes of Altataggart which had enhanced the start of the walk.

As advised, I followed the wall west until it crumbled away, crossed a sheep fence and traced a faint, muddy path in the bog for 500m.

…until it reached a junction where I took the remarkably straight, thrillingly desolate old bog road for another 500m. I love a desolate bog road – you can let your imagination insert itself into whatever century it pleases, at least until the first mountain bike comes along.

As the road petered out, I transferred to the obvious path for Pierce’s Castle. I reached the Castle (467m) in the book’s predicted time of 2 hours 20 minutes after a journey of 8.7km. It was time to enjoy the fabulous views and have a drop of lunch.

From Pierce’s Castle most of the remainder of the trek was clearly visible, but before the ridge and saddle between the Castle and Tornamrock could be reached I had to negotiate a short but steep mini-gully between large rocks to the left of the tor – the book helpfully suggested descending on one’s backside, a course of action which I at first declined, but soon adopted, slithering, shuffling and wriggling my way downwards with no regard for dignity.

Lunch having replenished my energy, Tornamrock was gained in double-quick time.

From the summit, the ascent up Rocky Mountain looked straightforward and so it proved. Keeping to the left of the large rocks at the summit of Tornamrock (390m), the path to the saddle was fairly grassy and reasonably clear.

The gentle climb up Rocky Mountain was undemanding, its modest 405 metres thwarting any evil false summits.

The view was expansive, particularly south towards Rostrevor and Carlingford Lough.

The descent was equally friendly; although steep, the slopes were grass-covered and offered good footing. On the way down, I spotted my first Mourne pygmy shrew shuffling through the undergrowth in a relentless hunt for food.

Back at Leitrim Lodge I reflected on the book/boot performance.

The boots got the thumbs up – comfortable, dry and supportive.

The book is a triumph. One of its key features is the strategy of reproducing OS maps and relating the route descriptions to numbered waypoints on the maps. This device provides a critical failsafe in case of any confusion. However, the route descriptions were very clear on this walk. I wasn’t sure that I liked the use of timings as a measure of progress, generally preferring distances, but I was pleasantly surprised when my own timings matched those of the route description. The production values are superb for a book that fits your pocket, with fabulous colour photographs illustrating the walk locations. There is plenty of information on various aspects of the Mournes including weather, geology, flora and fauna, kit, safety and accommodation. To conclude, by far the best printed walking guide on the Mournes available today and a benchmark for those that follow.

Read the author’s thoughts on the book here.

From the centre of Hilltown, turn left onto the road signed for Rostrevor and after a few metres take the first left, Leitrim Road. Leitrim Lodge car park is about 2½ miles further on your left

… you enjoy discovering a few spots that are slightly off the beaten track. It’s also unlikely that you’ll meet many fellow walkers so if you like a quiet walk, this one’s for you. You’ll be rewarded with some fine views

This is a moderately strenuous trek but average fitness levels should suffice. As with all Mourne walks, map, compass, sensible clothing and footwear are essential. Part of the route is open to mountain bikers so care needs to be exercised particularly in the section that begins at the junction of paths near the footbridge over the Yellow Water and ends at the grassy path that that leads into the trees. Incidentally, the Harvey Map for the Mourne Mountains (Superwalker XT25 series) shows mountain bike trails

The Mourne Mountains: the 30 best hikes, hand-picked by a County Down local. Knife Edge Outdoor Limited. 2019.