An Unplanned Adventure in the Mournes

Over a year ago my mate Phil and I began hiking together. For months, it was only the two of us just parking the car at different spots and heading off into the Mournes for a day-long adventure, walking along, challenging ourselves but most of all having a laugh and putting the world to rights. Since then we have formed our own group, the Mid-Ulster Mountaineers.

Now, we really enjoy the group hikes and all the people within are indeed good people, whom we get on with really well, but it seems, now and again, we miss each other’s banter and company – you know, the old times. Since we formed the group in January, we’ve only hiked together once in what has become known within the group as a Bromance Hike, until recently that is. 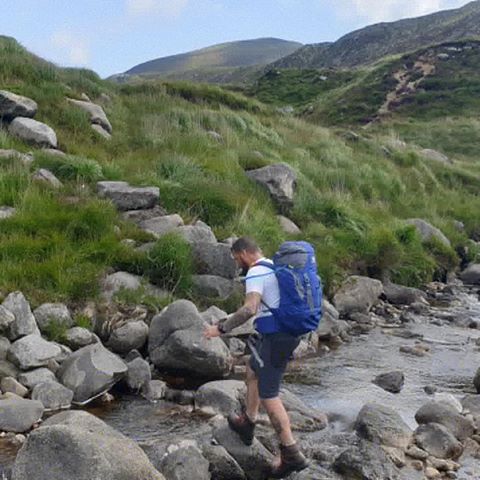 We said a couple of weeks ago, seeing as we were off for the July holidays, we would do a mid-week hike. Where? Who cares! Let’s go old school and head off and see where we end up. The thing about group hikes is they can be quite regimental; they would be organised a couple of weeks in advance, the route planned by 2-3 committee members, then agreed by the other committee members, and so on and so forth. That’s all well and good, and obviously necessary, but the best hikes are the unplanned ones, the ones that can go all day and the ones where there is a strong possibility of getting lost. This can only be achieved by those of equal fitness and wave length, like Phil and me.

The only planning we did was the time to leave (0500, not a popular time for Phil) and a starting point – Bloody Bridge. We arrived at the Bloody Bridge car park as the sun was just breaking through, the place was empty except for someone sleeping in their car. A leopard-skin bandana was lying on the road beside the driver’s door, so we posed for photos wearing the bandana, then headed off, across the road into the Manor. 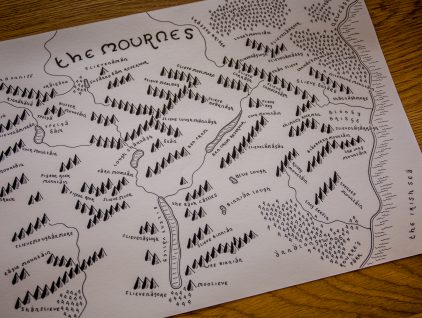 SHOP: Check out our map collection – they make great gifts for friends and family (or yourself!).

We hadn’t been hiking for about a month and it was showing. The gradual climb up to the disused quarry was hard on the lungs and legs, but gradually we got our breathing regulated and our legs started to remember what our favourite pastime was, walking up and down hills. The craic was good, it was like the old times.

We took a left at the wall, then followed it between Rocky and Chimney Rock Mountain, then followed the wall to the right, keeping Annalong wood to our left. I would love to say, “hey, that part was fun!”, but I’d be lying. Tramping through boggy, wet ground, jumping over hags and negotiating through 10-foot ferns, and being ankle deep in wet black stuff isn’t fun, but that’s hiking, you can’t have it all. The sun was shining though and we were still smiling and slagging people off, so we weren’t beat yet.

Phil, for about a year, has been trying to talk me into going through this cave he described to me in great detail, one that you have to “squeeze through without your bag, it’s that tight”. Honestly, I couldn’t think of anything worse, being slightly claustrophobic. He knew it was in Cove Mountain and only did it once with a fella I went to school with and who hikes all the time – his name is Glen. I can imagine Glen was trying to unnerve Phil at the time, but I’ve found that is an impossible thing to do.

So, as we approached the Annalong valley, Phil said to me, “oh look, there’s that cave I was telling you about, come on up and I’ll just show it to you”. Now I wasn’t born yesterday and knew right away Phil had an ulterior motive, but rather that lose face, I went along knowing what I was about to do.

As we made the cheeky wee climb up to the the cave I noticed the sort of tumbled rock formation that we would be using to climb through what looked like a postage stamp-sized hole. I said to Phil “are you actually being serious?” as I surveyed the opening, “I think the hole has been closed over with a large rock”.

“Nope, that’s it”, said Phil. Which isn’t what I wanted to hear.

So we were doing this, I guess. Up the green, slippery rocks we climbed, our fingers and feet hardly finding anything to grasp. A lot of team work is necessary at this stage. We reached the small opening, and I have to say, it actually wasn’t as bad as I thought, but I still made Phil go first. In he went, twisting and bending like a contortionist. He stood on my fingers, I let out a shout, he thought I’d fallen, but kept going anyway. He was through in seconds. I passed the bags through, then it was my turn. I looked up and Phil was videoing me on his phone and laughing. I told him that’s not on as this may not be one of my finest moments. 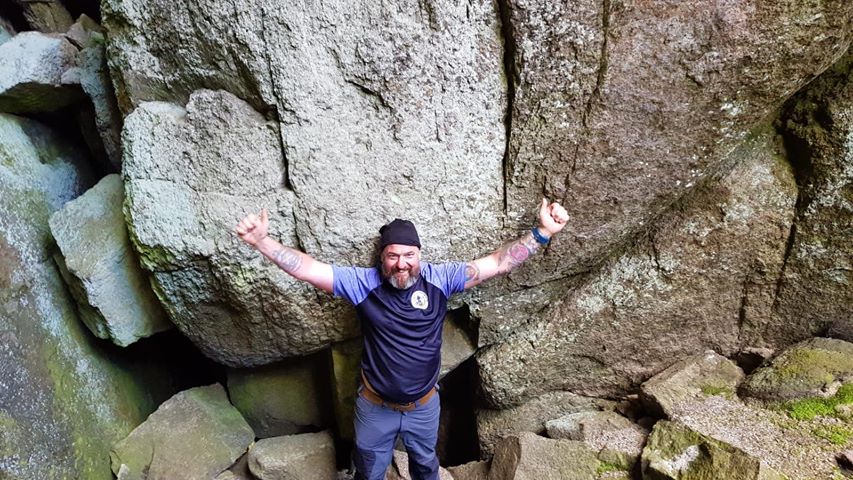 Both my arms went through the hole, trying to grab something to pull myself up. My feet were blindingly trying to find a foothold to push my body through the gap. My body was twisted into an unnatural shape, Phil laughing at my facial expressions. Feet in place, hands in place, body in a weird place, and through the postage stamp I went. Brilliant, it was exhilarating. I said to Phil, “hey, that was like a re-birth”. 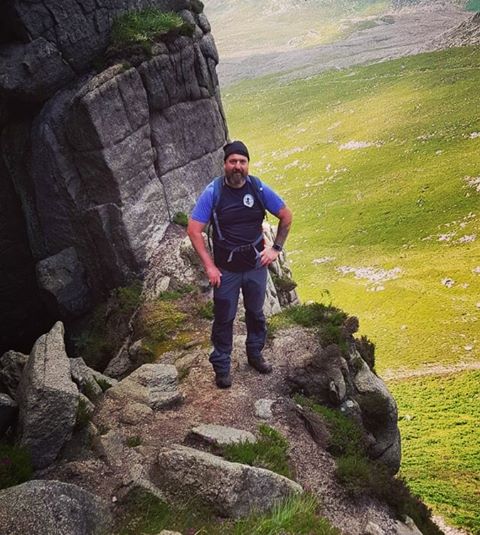 A few pictures taken, the views from the cave on both sides are breath-taking, and we were off again, to the Devil’s Coach Road for more adventure. Up the coach road we went, calves on fire, out of puff and loving our favourite spot in the Mournes. It could have been a different story if I had been 6 inches further at one point. I lifted my head and spotted a fist sized rock flying in my direction, bounced off another rock and whizzed past my face, I could feel the air whoosh by it was that close. The loose rocks at this spot are quite notorious, as I almost found that out first hand. Unscathed, we carried on and had some lunch at the top.

Time was running out for us and we decided we may only have a few hours left before we have to head home, so we decided to climb Donard as it was on the way back. We didn’t want to go home that early. Up we went – it was the only time we bumped into people. They were saying to us, “you only starting?”, “you’re near there, keep going”. We’d been walking for nearly 7 hours; we were absolutely filthy and we stank. If we looked like we’d only started, or we were just doing Donard, I would love them to see us after the day was over. 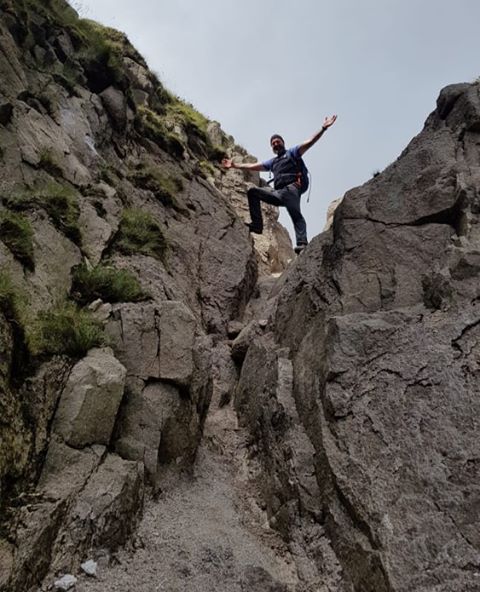 So, back to the car we went, stopped at the Harbour Inn for a coffee and desert (you know, for the sugar level!) then home. We reported it was our best hike ever, unplanned, a bit of adventure, a bit of danger and the real possibility of ending up in hospital. The best kind.