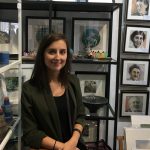 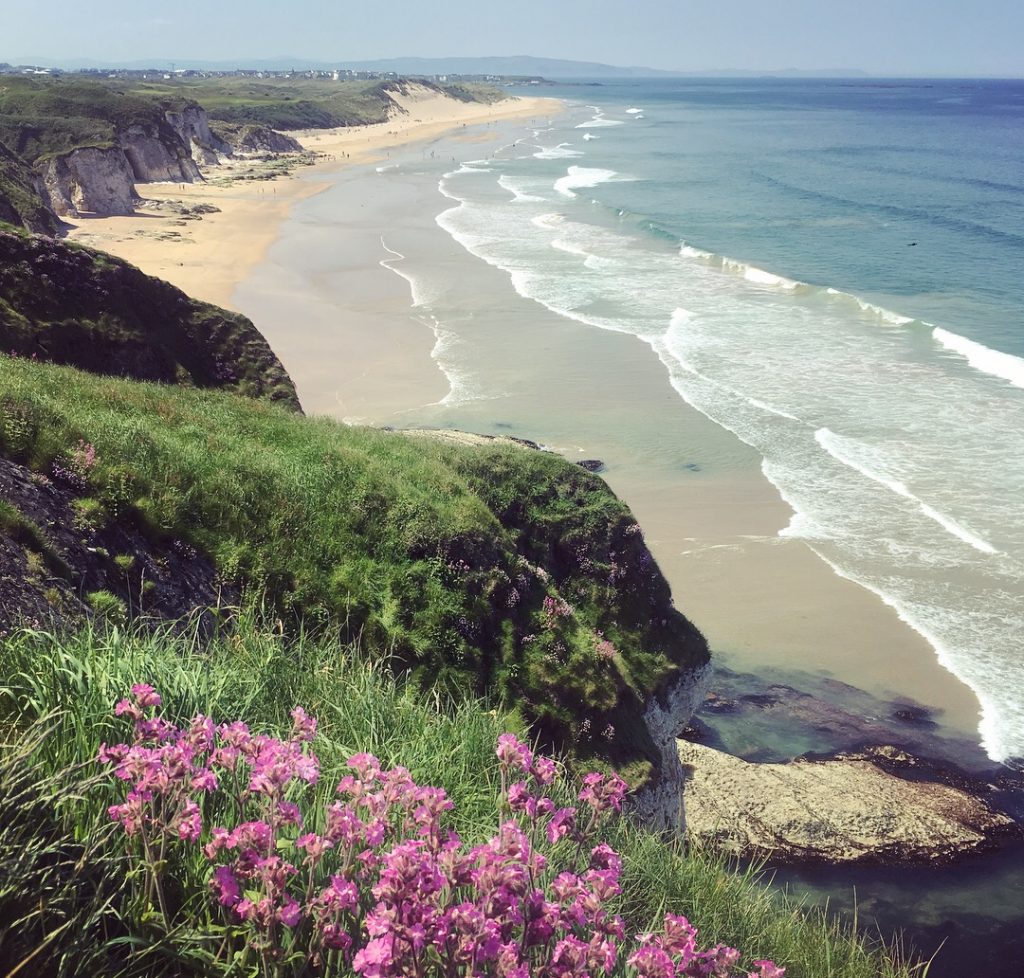 My name is Gemma O’Neill and I’m an Illustrator/Author from the Causeway Coast. I graduated from Falmouth University in 2011 with a BA (Hons) Degree in Illustration. I also graduated with my first authored and illustrated picture book deal after visiting the Bologna Children’s Book Fair during my final year of study. 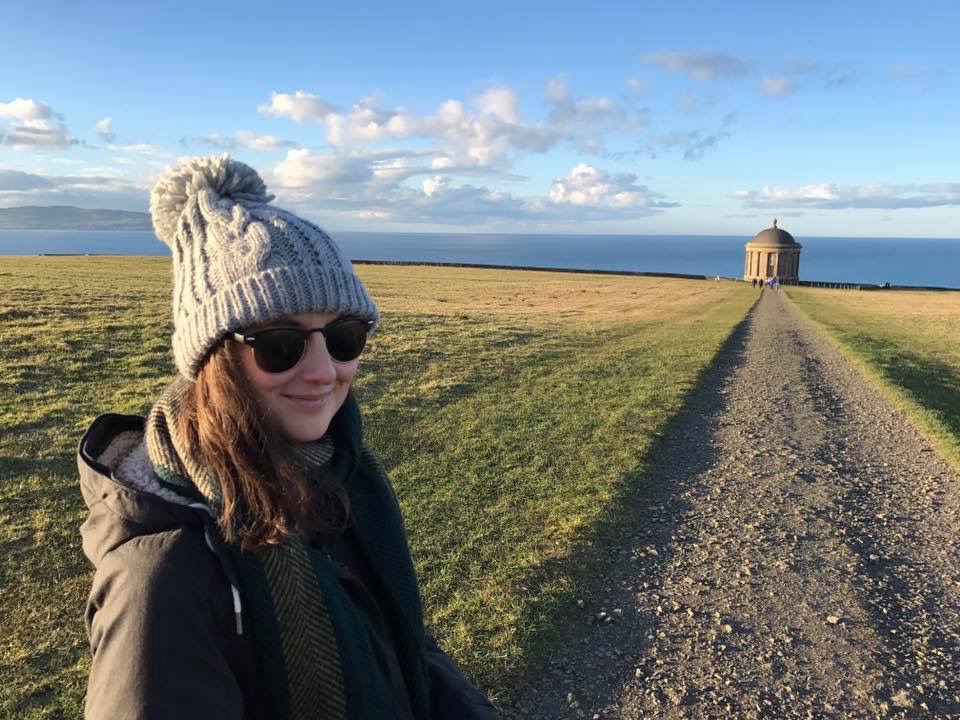 My books have now been published globally and have been nominated for awards such as the Kate Greenaway Medal, Dundee Picture Book Awards and Coventry Inspiration Book Awards. 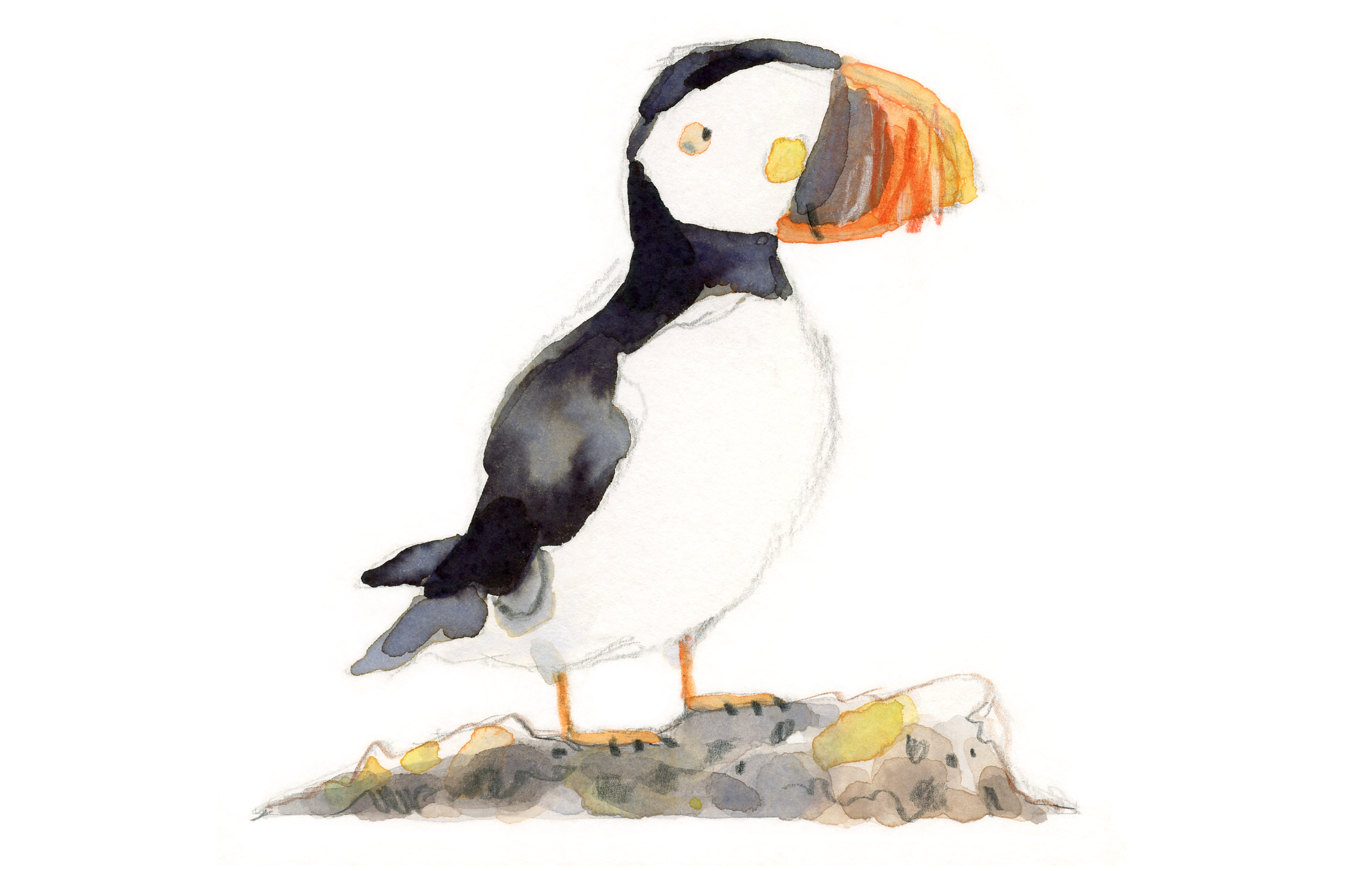 I’ve always had equal love for fine art, design and storytelling, so the combination of illustration and creative writing was a very natural career choice. I initially specialised in children’s book illustration, but I now enjoy all forms of book illustration and illustration in general. I have my own greetings cards range, print range and enjoy exhibiting, selling and being commissioned for original artwork too. 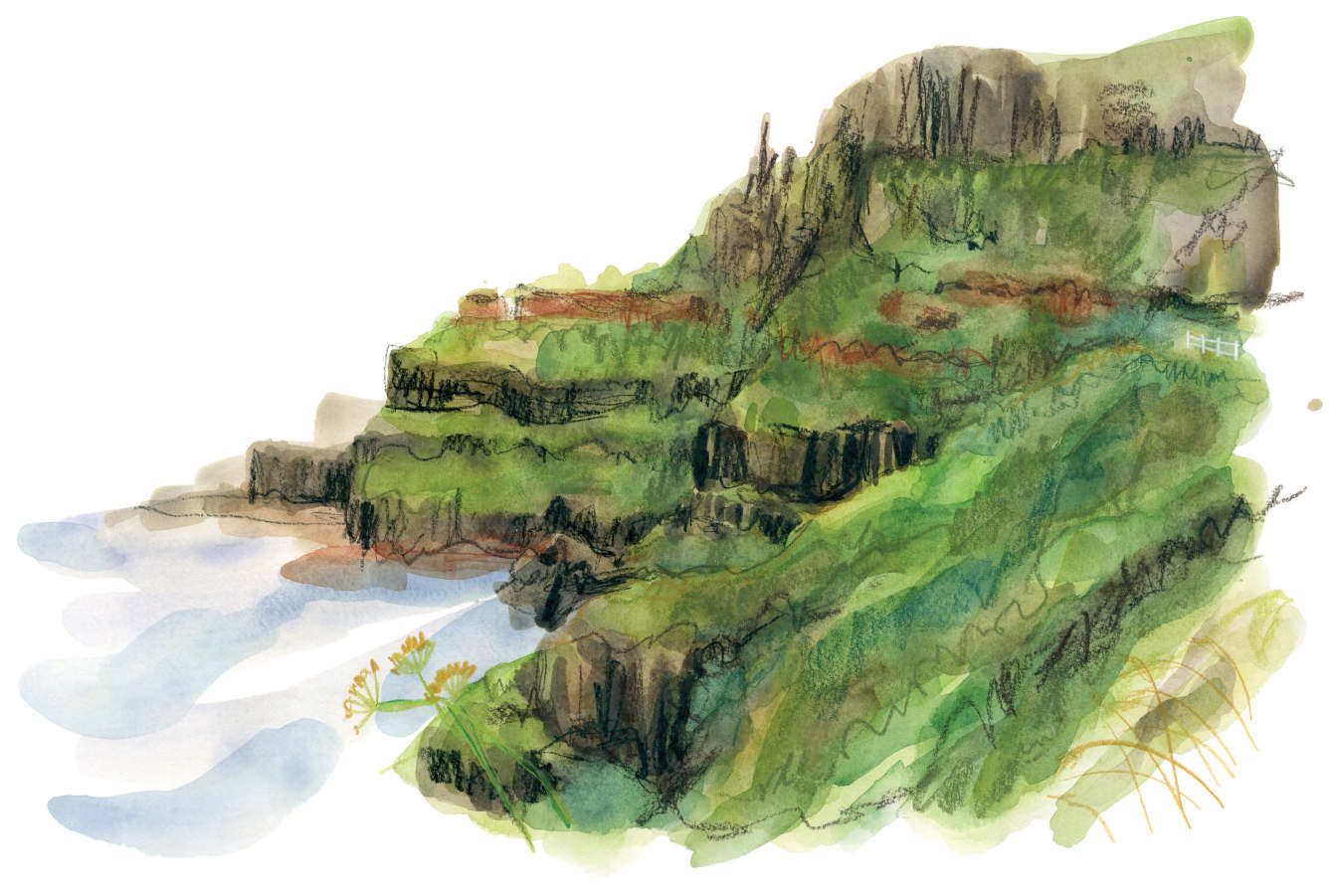 Nature, history, travel and photography have always influenced my work and my Causeway Coast roots have undoubtedly been of huge inspiration in terms of mark making, colour and the natural theme within my work. 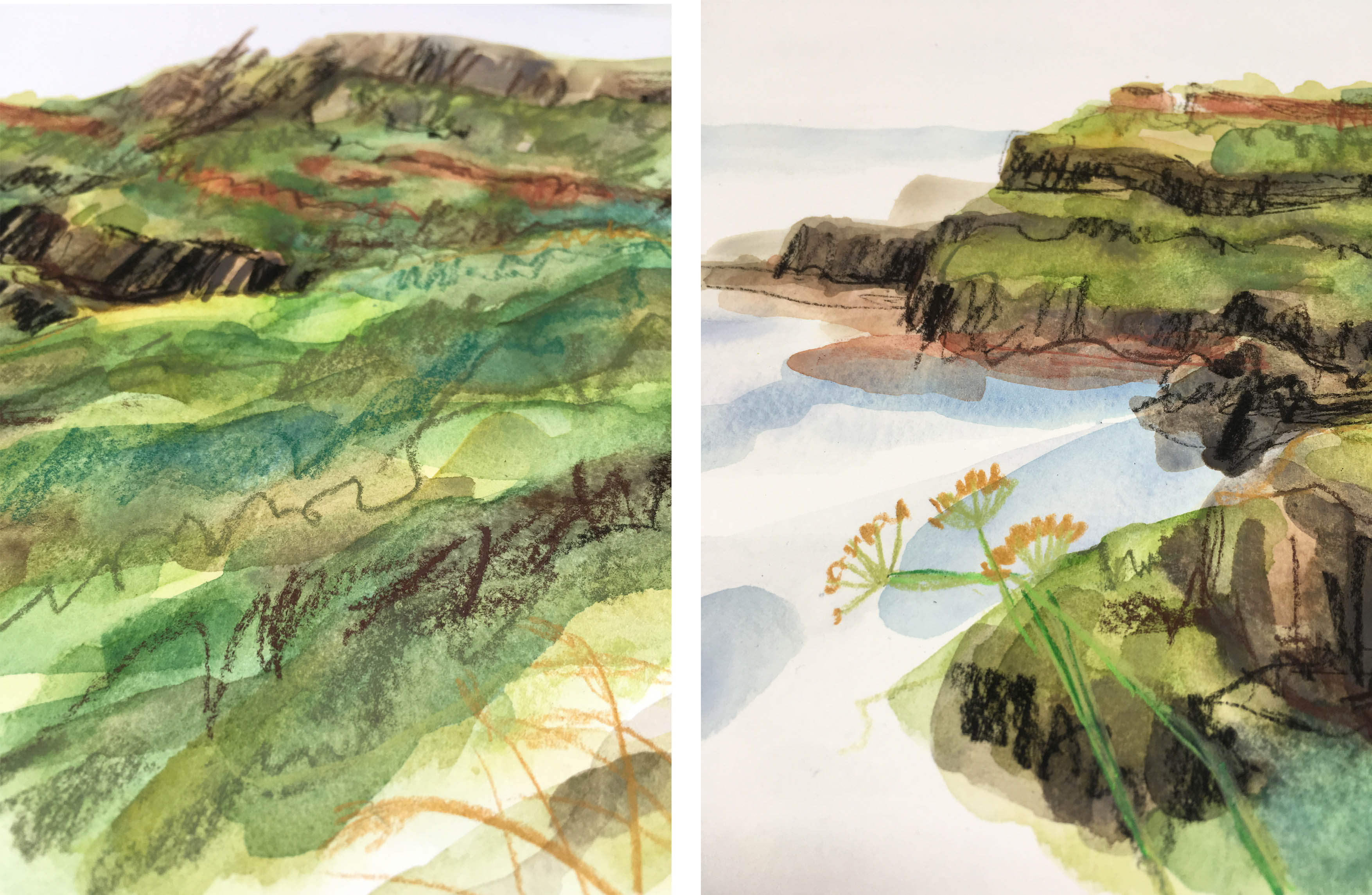 I’ve always wanted to undertake a substantial project on my native coastline and I was delighted to receive funding for the project from the Arts Council of Northern Ireland’s Lottery Funds under the Support for the Individual Artist Programme last year. The aim was to create a large body of work based on the Causeway Coast, building upon my existing strengths as a mixed media illustrator and to promote this beautiful part of the world. I always intend for my work to be truly original, but in this case to also reflect and do this unique, iconic coastline justice. I created a body of illustrations inspired by first hand location studies. 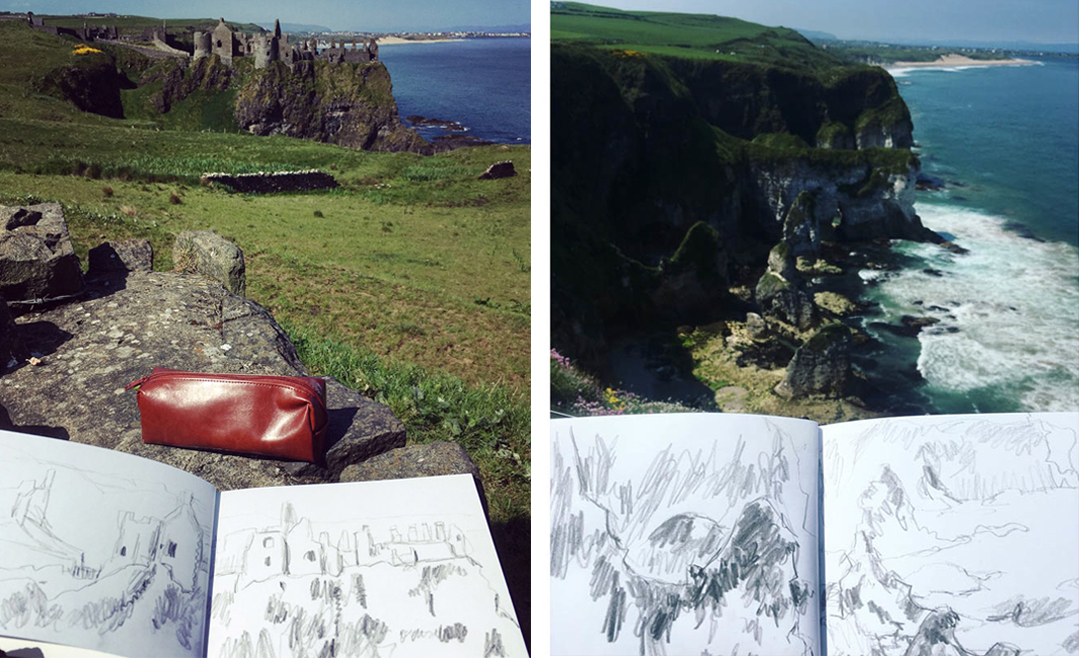 These studies were absolutely essential, but proved to be quite challenging at times. I’m obviously very used to the extremes of the Causeway Coast, but the added challenge was that I moved to County Down last year. So I planned trips to the north coast around the weather forecast as sensibly as I could. There were a few days where the conditions were almost impossible. I expected this to be the case though and I anticipated that this would make me work quicker and hopefully bring a new looseness to my style, which I think it definitely did. The conditions also enabled me to capture the wild, refreshing atmosphere I associate so much with the coastline. 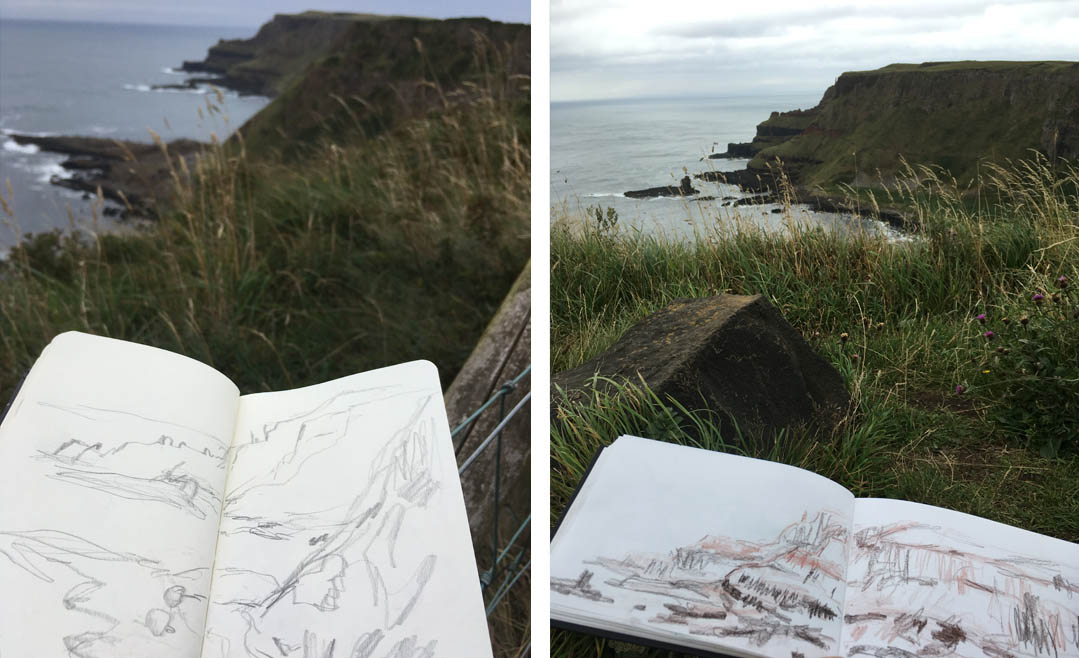 Though the project was a challenge, it certainly wasn’t a chore. It was a lovely reason to pop home. Before the move to County Down, I had lived right next to Whiterocks Beach in Portrush for six years. I was lucky enough to be able to call this the first home of my own and grew very accustomed to having so many adventures ready and waiting on my doorstep. 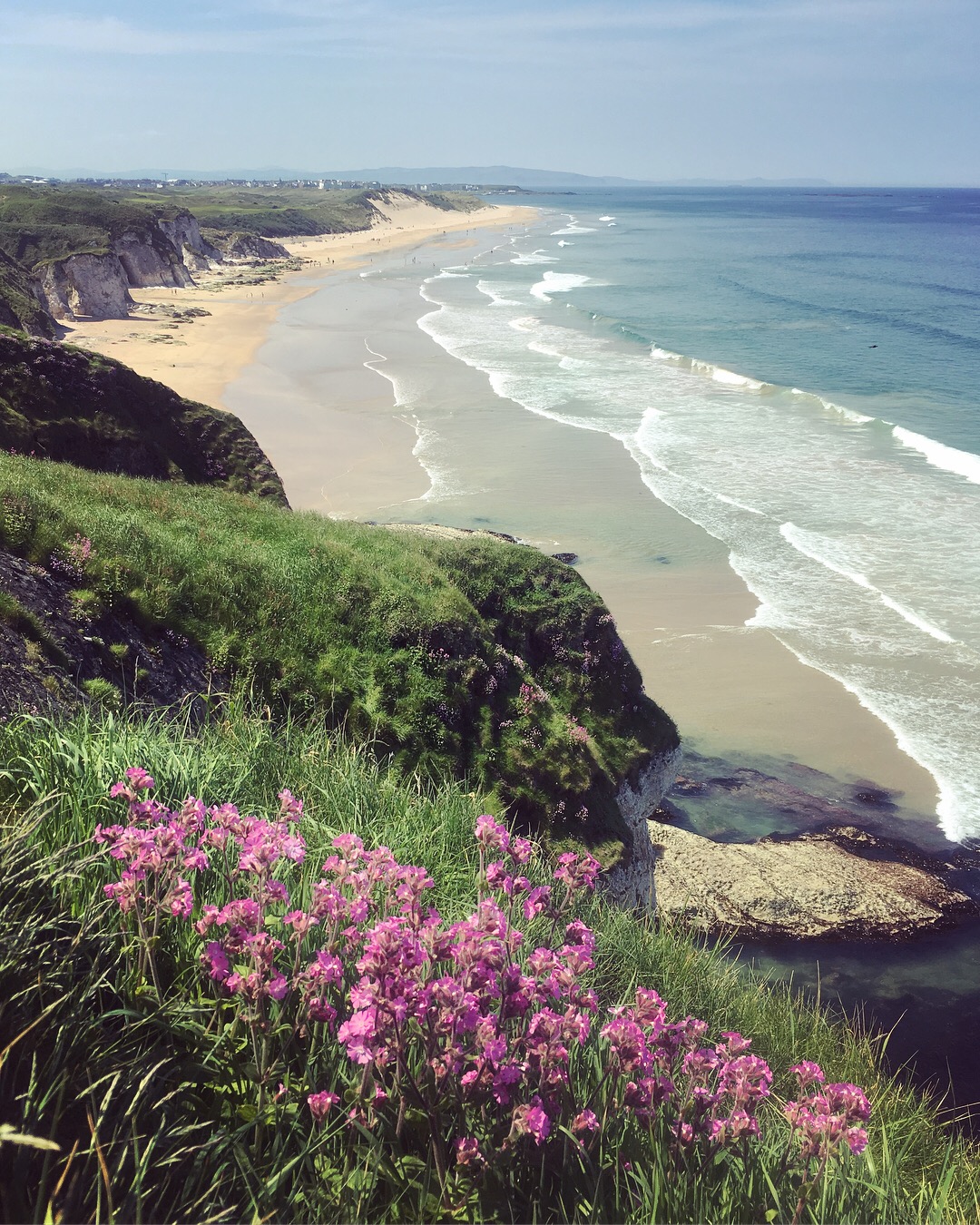 I’ve always enjoyed walking, exploring and being outside, but walks turned into much longer hikes when I moved to Portrush and I suddenly discovered trail running. This came as a bit of shock, as I had never been a runner before. There’s just something about the cliffs on the north coast though (and now the Mourne Mountains). I hadn’t truly explored them at length until moving to Portrush and I found I had an uncontrollable urge to run as soon as I stepped on them, especially on the most uphill parts of the cliffs! It was exhilarating, but it also just felt so natural to be running on a cliff edge; natural to the point where it wasn’t long until I’d started working 30 kilometre runs into my week. 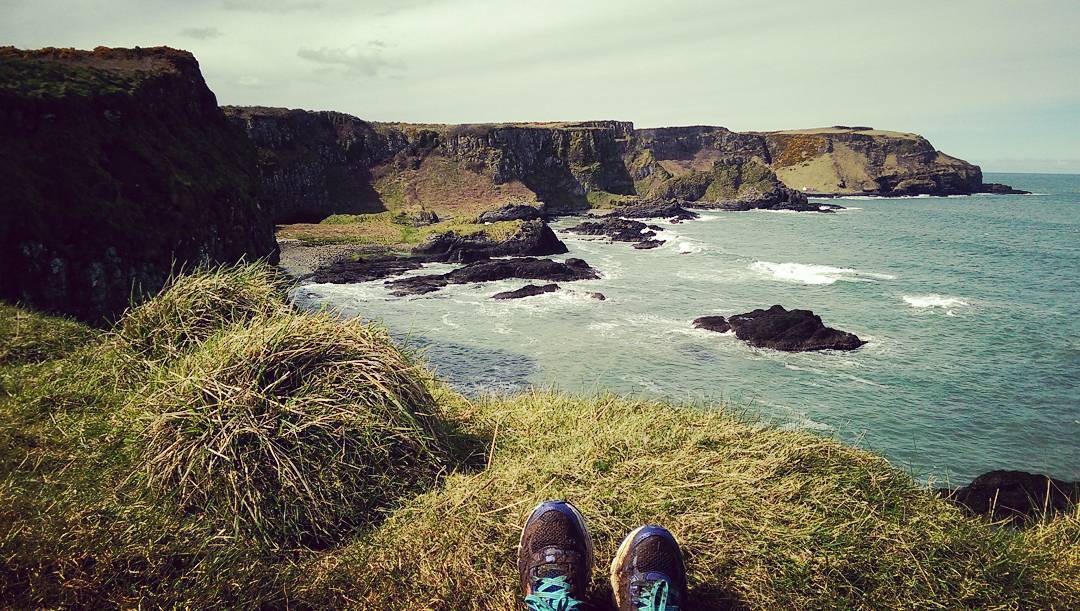 The beauty of the spot where I lived was that I could turn left and run in the direction of Portstewart or turn right and run as far as Carrick-a-Rede Rope Bridge if I liked. One of my favourite 30 km-ish routes was from my apartment to Portstewart Barmouth and back, via the cliff path. It was roughly the same distance in the other direction to the Giant’s Causeway via Dunluce Castle on the cliff path. 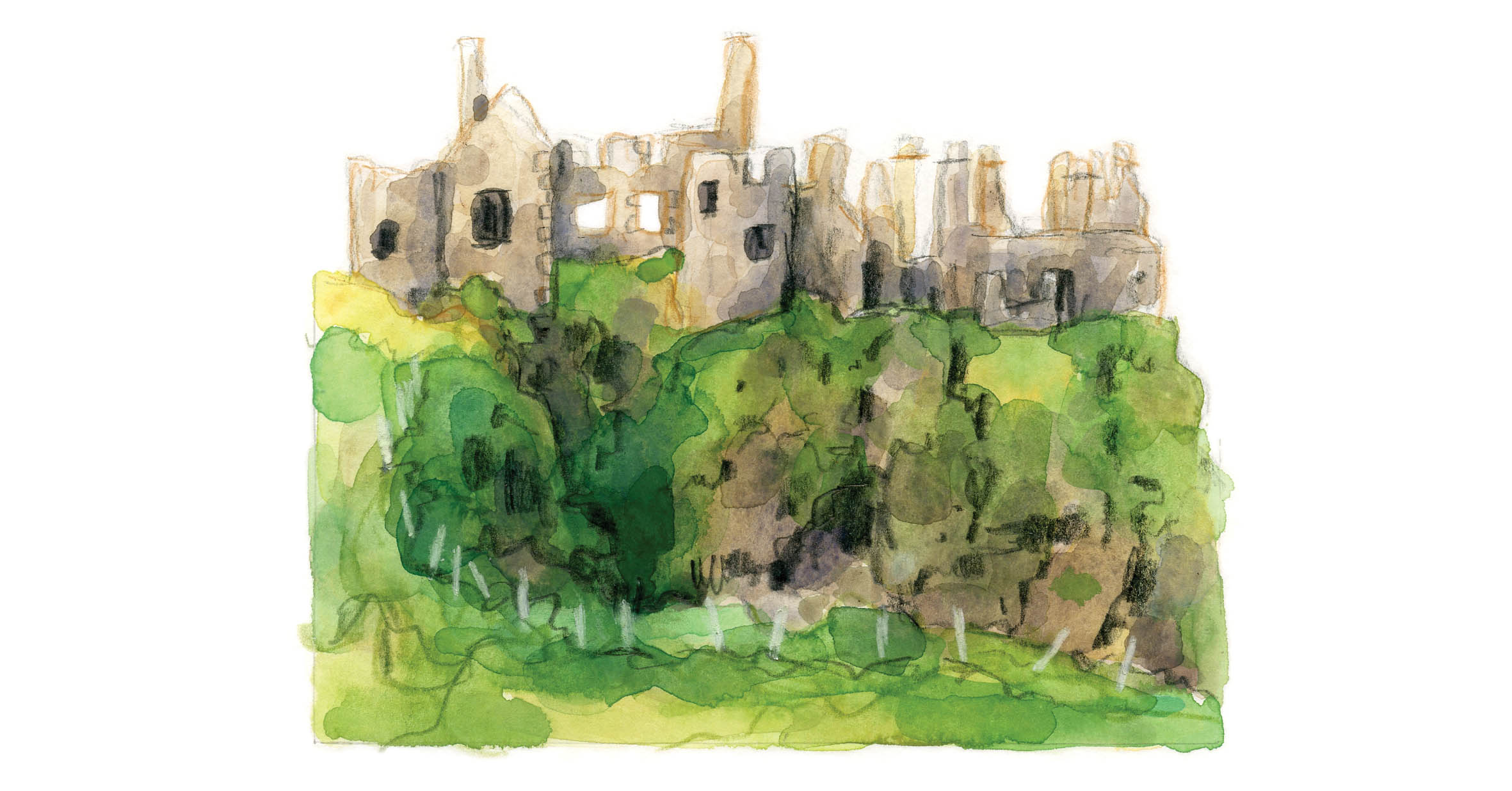 I’m undecided, but the cliff path above the Giant’s Causeway is possibly my true favourite. 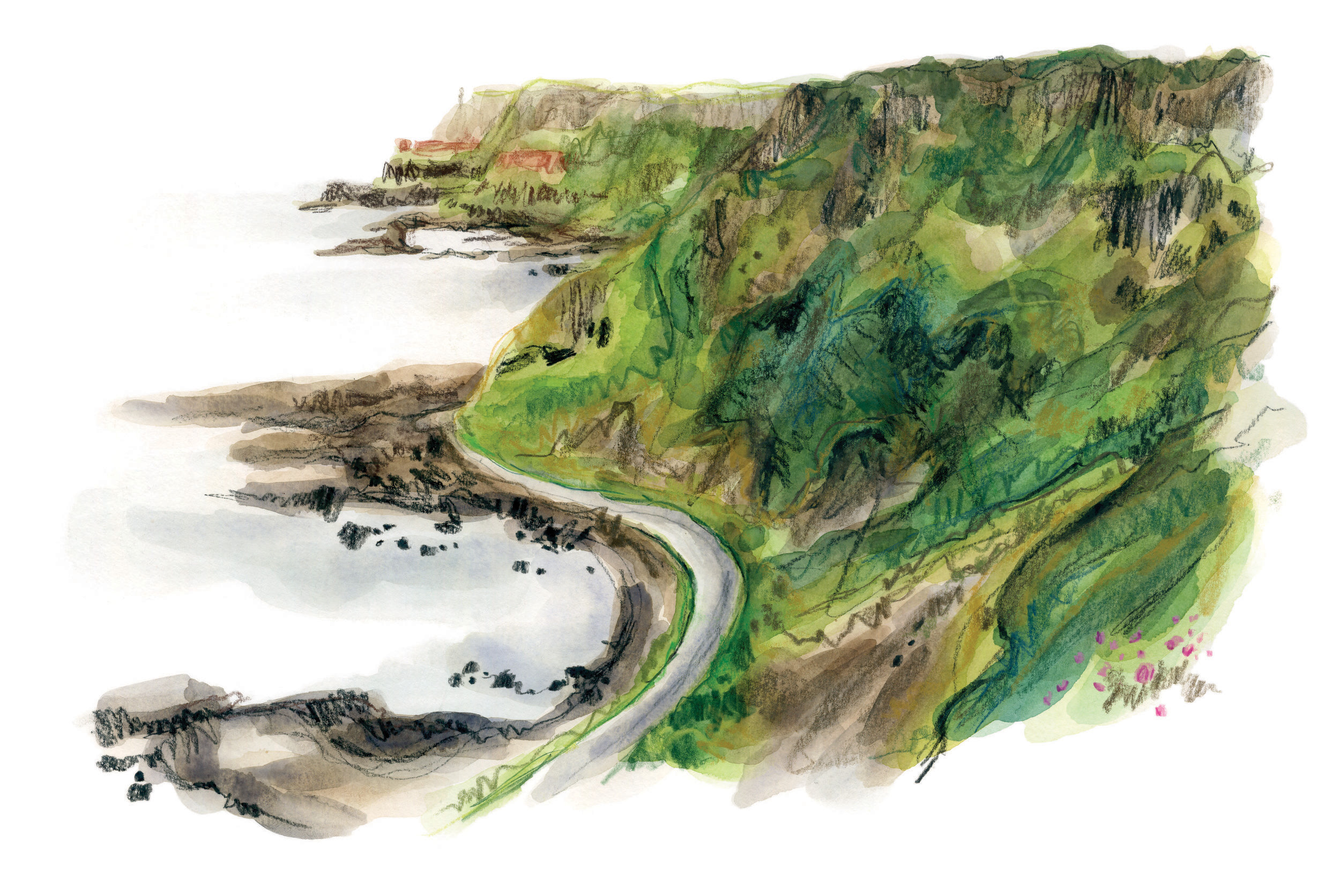 Much like the others, there is so much to see and explore there. Though it’s probably the most undisturbed route and you get an unbelievable view of the basalt columns, Rathlin Island and Slemish Mountain as well. There are beautiful hidden caves, rock pools and streams as you get closer to Ballintoy too. It’s just such a stunning, varied landscape there, as it is on the whole of the north coast. Another particularly varied part of the coastline is in and around Castlerock. There’s countryside, woodland, Mussenden Temple, a castle and gardens, beaches, Binevenagh Mountain and a view of Donegal. We’re incredibly spoilt on the north coast really! 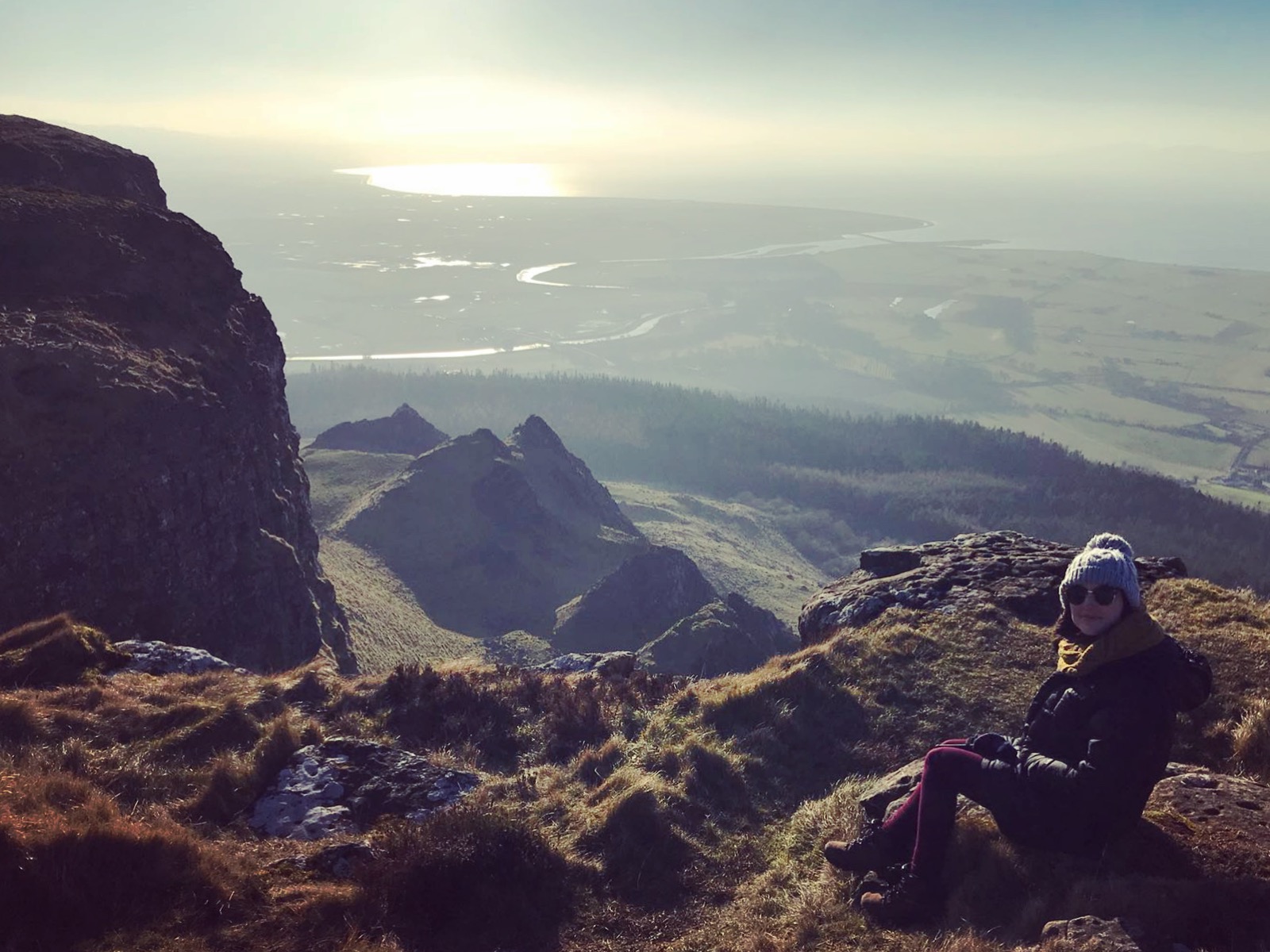 I’m so proud to say I come from the Causeway Coast and I hope my love for it has shone through in my project. It isn’t just a one- off project, but a body of work I’ll continue to research and develop for the foreseeable future. I’ve developed so much as a visual artist as a result of the project and I can’t thank the Arts Council enough for their support.

I’m really chuffed to say the project has now led to me being shortlisted and named a finalist for NI Young Artist of the Year. The outcome will be announced soon. Fingers crossed! It’s actually just amazing to have got this far and the maximum age for the competition is 30, so I’ve been lucky in that sense too; I turned 30 over the summer! If you fancy seeing any of the illustrations in the flesh, a piece will be exhibited with the other finalists at the Braid Arts Centre in Ballymena over January and February. You can also pick up prints and postcards from my online shop or keep an eye out for my work with relevant retailers, as I’ve just began the process of getting worked stocked by some of my favourites.

My name is Gemma O’Neill and I’m an Illustrator/Author from the Causeway Coast. I graduated from Falmouth University in 2011 with a BA (Hons) Degree in Illustration. I also graduated with my first authored and illustrated picture book deal after visiting the Bologna Children’s Book Fair during my final year of study.