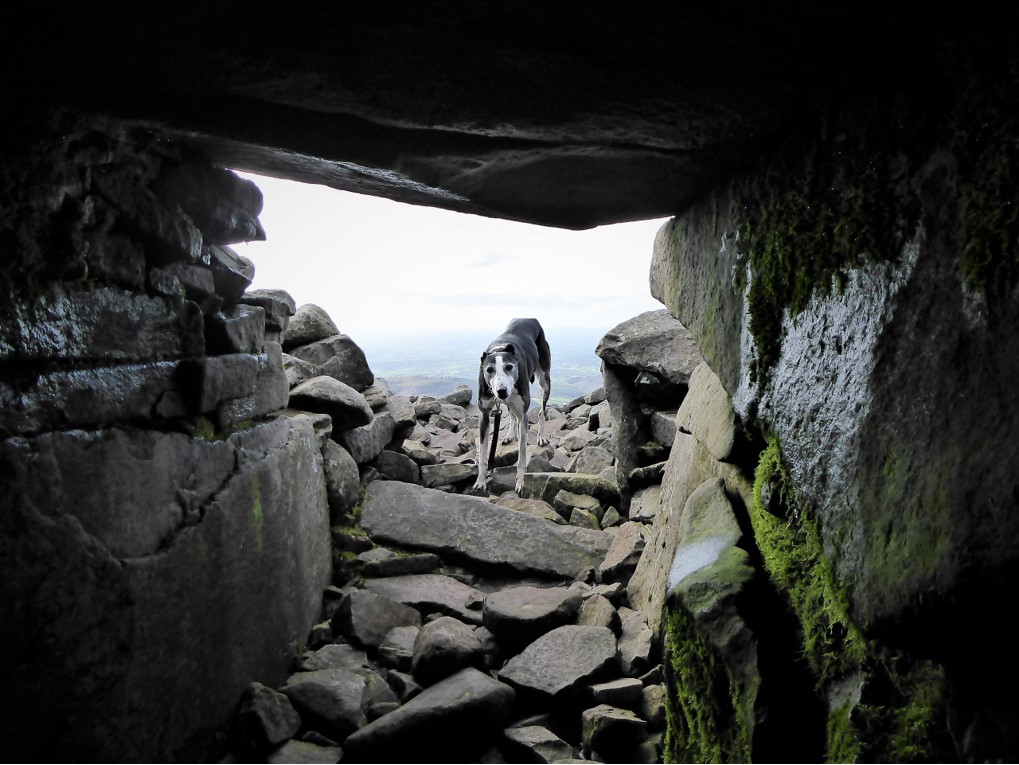 Enjoying a prominent position at the centre of the Ring of Gullion Area of Outstanding Natural Beauty (AONB), Slieve Gullion, at 573m, is the highest point in County Armagh. It towers above a ring of low, rugged hills known collectively as The Ring of Gullion. This unique landscape was the first ring dyke in the world to be geologically mapped. The area revels in a profusion of stories, myths and legends, many arising from its lavish archaeological heritage.

I was joined by my second-favourite walking companion, after my wife Penny, in the form of Willow, my daughter Laura’s dog. The farmers in south Armagh seem to be reasonably relaxed about dogs, as long as they are kept on the lead.

READ: Hugh Annett: Why the Mournes are special to me

After arriving at the car park of Slieve Gullion Forest Park, we made our way out of the exit and down Wood Road for about 500m before turning left onto Ballintemple Road. On our left, we passed Killeavy Castle, currently undergoing transformation to a hotel and wellness centre. Another 1.5km took us to Clonlum Cairn, which unfortunately has been badly disturbed over the years, some of the stones having been used in the building of Killeavy Castle in the 19th century – let’s hope the spirits of the past don’t disturb the wellness centre.

After a further 1.5km, the atmospheric Killeavy churches appeared through the trees like a Dracula film set. The site has been a place of worship since the 5th century when the convent of Killeavy was founded by Saint Moninna. In 923 it was plundered by Vikings and in the Middle Ages it functioned as a convent of Augustinian nuns before dissolution in 1542.

The Ballintemple Road soon merged into Ballard Road which took a steep incline until we reached Ballintemple viewpoint. The views were spectacular – not so the immediate area which seemed to be used as a dump for used tyres and other detritus.

We continued along the scenic, traffic-free Ballard Road for about 1.5km until we reached a gate on the left opposite a whitewashed bungalow. The gate bore a sign asking for dogs to be kept on a lead. The well-worn path confirmed that this was the track for Slieve Gullion.

The long haul to the summit was reasonably straightforward; there were opportunities for wrong turnings, but we managed to avoid these by keeping a close eye on the map. There were also three or four ancient metal waymarkers, the first of which points in the wrong direction (tackling the circuit in the opposite, clockwise course, it would be the last marker). The views north and east were breathtaking, with the sun illuminating Cam Lough and the surrounding hills and forests.

We met no-one on the slopes, the perfect peace interrupted only by the sheep and the honking of a group of ravens enraged at the presence of a pair of buzzards.

As we gained height, we were rewarded with superb views of Carlingford Lough, the Mournes and the Cooley Mountains.

After enduring a few “false peaks” we eventually reached the North Cairn of Gullion, in truth resembling little more than a pile of rubble. From there we could see the trig point and toposcope on the South Cairn, which seemed quite far away. We ploughed on through quite boggy terrain towards Calliagh Berra’s Lough. In one of the legends relating to the lough, Finn McCool was bewitched by a wicked hag, Miluchra, who tricked him into swimming in the lough whereupon he turned into a weak old man. The superstition survives that if you bathe in the lough your hair will turn white. As my hair is already mostly white, I resisted the temptation to test the truth of the legend.

We soon reached the South Cairn which offered magnificent 360˚ views with just about all the peaks shown on the toposcope clearly visible.

As befits the home of the highest surviving passage tomb in Ireland, the South Cairn was an impressive and atmospheric sight. It is about 30m in diameter and up to 4m high with huge stones around the edge. It was possible to squeeze into the tomb for a closer look, although Willow was most reluctant to join me inside.

Archaeological investigations completed, we made our way down the steep but obvious path to meet the forest road. There was a small amount of traffic on the road as visitors can enjoy a 10km circular drive through the forest. We were greeted with splendid views throughout the walk back to the car park and Courtyard Centre. We spotted a couple of squirrels on the way, but couldn’t tell whether they were the much loved red variety or the universally reviled greys.

On returning to the Courtyard Centre, I treated myself to a coffee and scone in the excellent café. The facilities in general are excellent and I noted that a Tourist Information Centre has been added since my last visit. For more about the innovative, energetic team behind the Slieve Gullion AONB, check out http://www.ringofgullion.org.

By car, via A1 and B113. An infrequent bus service operates between Newry and Forkhill. Check out http://www.translink.co.uk

This trek’s for you if you don’t mind a bit of road walking on generally very quiet, scenic roads. The walk can be completed in the opposite direction to that described – in that case, the trek to the summit is shorter but quite a lot steeper. It can be attempted at any time of year, although clear weather is preferable if the views are to be enjoyed at their best. Map, compass, wet weather gear and a stout pair of boots are essential. It’s a moderately strenuous trek so a good level of fitness is desirable. If you don’t feel like attempting the full circuit, it’s possible to drive to an upper car park on the scenic drive, adjacent to the track that leads up to the South Cairn, thus shortening the trek by two thirds; however, check beforehand that the scenic drive is open as it closes occasionally to facilitate forestry operations. If you don’t want to carry a lot of food, you can get a substantial meal at the café in the Courtyard Centre. If parking in the car park, check the closing times.