Mountains and Megaliths: Treading the Boards on Cuilcagh and Cavan Burren 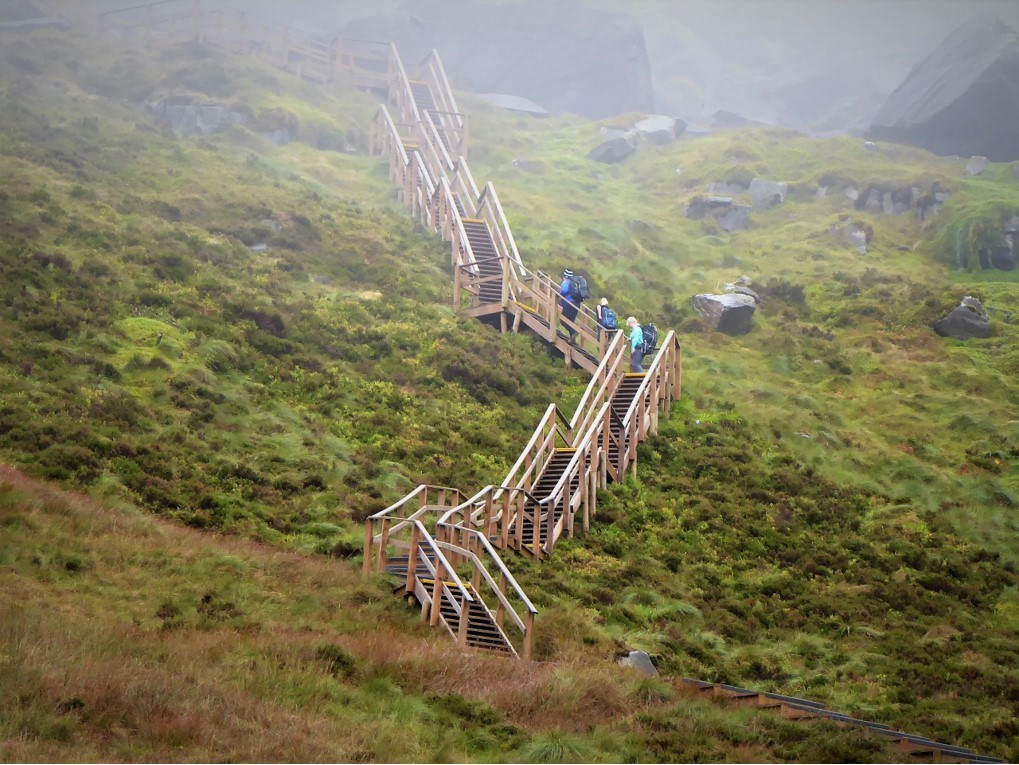 At 666m, Cuilcagh Mountain is the highest point in both Fermanagh and Cavan and is the only peak to straddle Northern Ireland and the Republic. That honour makes up for the less flattering fact that it is the 169th highest point in Ireland.

READ: A Quick Trek to Doan

My wife Penny and I had planned a Fermanagh trip for some time and we chose Belcoo as our overnight stop. A reasonably early start from Ballynahinch got us to our destination for 10.15 and we headed for the Marble Arch Caves, which are less than a mile from the well-signposted car park for the Cuilcagh Mountain Park. Five Pounds was the fee but as there was no-one around to collect it, we set off £5 richer than expected.

The first 4km followed a gravel farm track through rough sheep pasture, mountain streams and a scattering of attractive limestone pavement before reaching the broad expanse of blanket bog and its protective boardwalk.

The boardwalk continued its gentle incline for another kilometre through wonderful, wild bogland as the mist rolled in.

As the gradient increased, the boardwalk became stepped and soon acquired handrails to guide us up the steep trek to the final platform.

Unfortunately, the mist had been gradually closing in and visibility was very poor. There was no question of proceeding onwards across the summit path to the cairn even if we had wanted to attempt it, as the route has been temporarily closed to relieve pressure on the sensitive habitat.

The boardwalk on Cuilcagh Mountain has attracted a fair amount of comment, some of it rather rude. The stepped section and its final raised platform have drawn the most acerbic criticism, being described as, among other things, a monstrosity and accused of assaulting the integrity of the mountain. Others have welcomed the boardwalk and platform as a means of opening up access to a landscape which is both beautiful and fragile. Indeed, the fragility of the landscape provided the impetus for the project which sought to protect the blanket bog from excess footfall, with easier public access an incidental consequence. I feel that the detractors have a point in claiming that the boardwalk will attract inexperienced walkers who will have access to the summit plateau, an area which is very rough with sheer drops, sinkholes and can be liable to very unpredictable weather.

Cuilcagh does already suffer a little from Slieve Donard syndrome, that is, the attitude that says – let’s do it once so that we can say we’ve done it – and because we won’t be returning, we may as well leave our mess there. Even on a Tuesday in September, in grungy weather, quite a few walkers were on the boardwalk, one of whom carried a brolley and wore deck shoes. Litter was also visible, although not in significant quantity.

On our return to the car park we were relieved retrospectively – and willingly – of our £5 parking fee. As a gauge of the popularity of the walk, we counted about 25 cars.

In the afternoon, we made for the superb Cavan Burren Park. It’s located about 4km from Blacklion, which is just a few metres across the border from Belcoo. The Park sits on a limestone plateau at about 300m. The views were superb, the weather having improved so dramatically that we were goaded with a beautifully clear view of Cuilcagh from the east.

The 10km of walking trails take in a wealth of prehistoric remains including wedge tombs, dolmens, a promontory fort and ancient field walls. The Park even has a few boards underfoot to facilitate access to trickier areas. The signage is exemplary – clear, readable and informative while managing to remain unobtrusive. The views were unrivalled.

Further hiking activities were severely curtailed by the guest appearance of Storm Ali the next morning. We’re looking forward to a return trip as there is huge walking potential in Fermanagh and its neighbouring counties to the south.

This trek’s for you if

you don’t mind sharing your trek with a lot of other walkers. Bear in mind that this walk can be very busy, especially at holiday periods and walkers are restricted to a fairly narrow boardwalk for part of the route. However, the landscape is wild and desolate and the views are excellent on a good day. It’s an easy walk, with only a short strenuous stretch near the summit. Average fitness levels should suffice. Deck shoes and umbrellas are not recommended.