A Dander Around the Big Pond: a 3-day hike around Lough Neagh 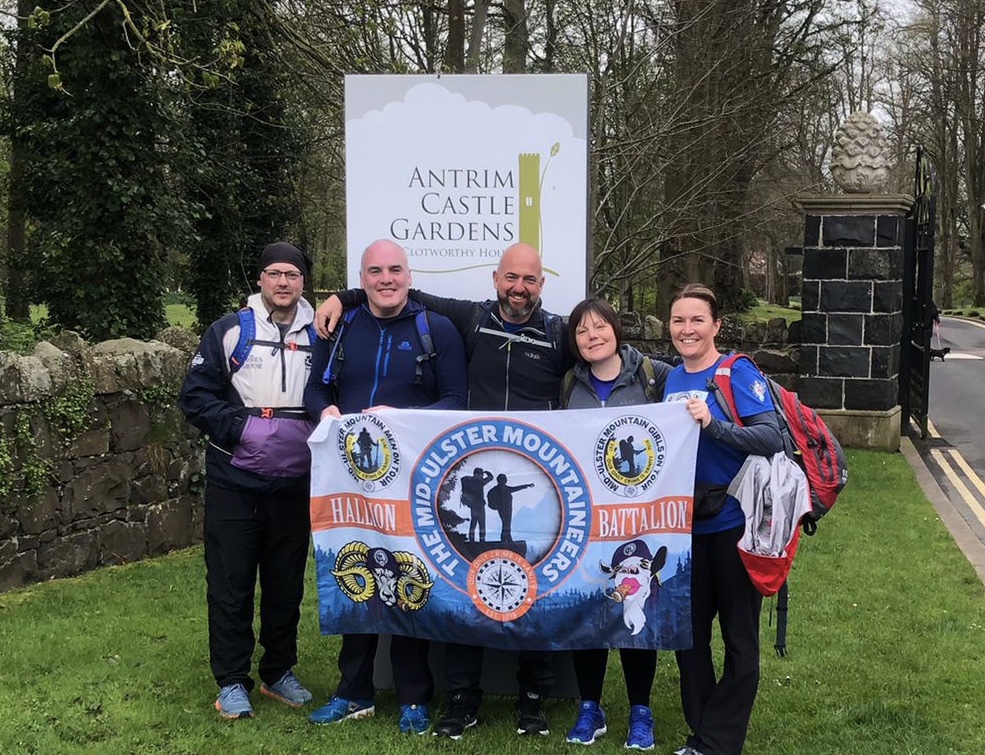 Hiking around hills is awesome. The rough terrain, wonderful scenery, the nature, the tranquillity, and of course the lack of/absence of traffic. That is comfort. That is getting away from it all. That is, in my view… hiking.

Our hiking group, the Mid Ulster Mountaineers picks a different charity to raise money for each year. This year we have chosen the Northern Ireland Children’s Hospice. The reason for this is the little daughter of one of our members availed of the Hospice care before she lost her brave battle after 5 short years. 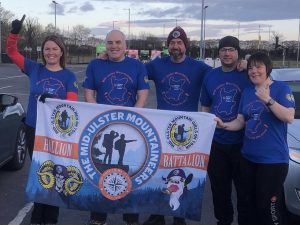 Our charity events are usually two-fold. A big event and also, what has become known as a side quest. This year, our big event will see us climb the highest peak in each province of Ireland over 72 hours in June. A big undertaking, mostly a logistical nightmare. Our side quest (the name suggests a smaller event) seemed like a breeze on paper when I bounced it off our member Simey one Sunday during a regular fortnightly hike. 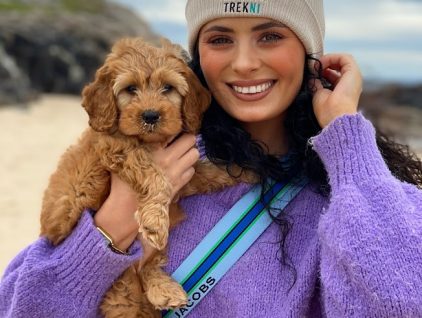 Now, I don’t know about the reader, assuming the reader is a hiker, but the best ideas are made in the hills. Mostly dreams, forgotten about by the time you get to the car. I like to hold on to an idea, especially if it involves some sort of endurance test that nobody or very few people have taken part in. Last year my cousin and I ran for 4 miles every 4 hours for 48 hours as a side quest. Just to give some context.

I approached Simey with the brainwave “how about you and I walk around Lough Neagh this year for the charity?”. Simey and I have known each other for a long time, and are of similar age and ability. Although, if Simey hadn’t turned up to the hike, someone else may of very well been approached. 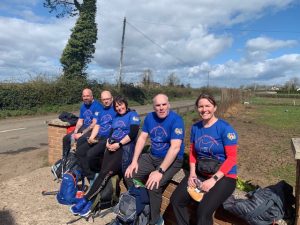 It turns out Simey was the best man for the job. As the hike went on, we discussed the pros and cons of taking on such a challenge. The route – I’ve cycled the route a few times, it’s pretty flat, mostly country roads, some dicey areas. We take a risk in the hills so we aren’t afraid of a bit of danger. Logistics- where do we start? How many days will it take? Where do we sleep? Are there B&Bs on the route. This was becoming a bigger task than we initially thought. 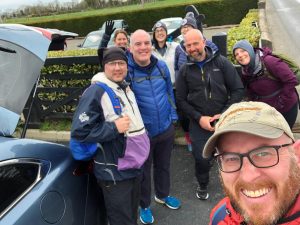 We started involving more people in the conversation. We also thought it would be only right to involve Sandra, whose daughter Molly’s memory is who we were raising the funds for, and her partner Stephen. Also Yvonne. Yvonne is the Newly elected Joint chair and a very able hiker and level-headed individual. The rest of us wouldn’t have done without her. 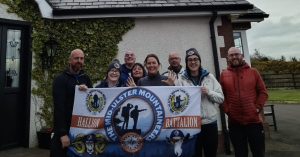 Also Jimmy. Jimmy was the logistics. He had our bags and spare kit in his car and would pick us up at night and drop us at the B&Bs. Then pick us up in the morning to bring us to where we left off. Those are the protagonists. Five determined and highly motivated individuals who hadn’t a clue what was ahead and how hard this task would be. 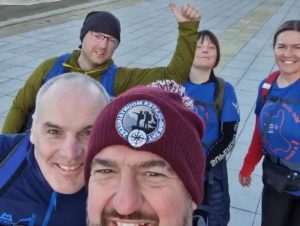 We started at the Asda in Portadown on a bright and dry Saturday morning, almost dressed like we were about to take on a day in the hills. Backpacks, hiking gear but walking shoes or trainers as opposed to boots. Jimmy, along with Yvonne’s family saw us off. Out of Portadown and past Craigavon Lakes with its new leisure center and revamped paths for dog walkers and runners alike. The swans and geese were resting at the banks oblivious to our passing. A couple of walkers gave inquisitive looks as to why we were dressed like hikers on a 5k long path.

Out of the lakes and past Tannaghmore Gardens and into the first of many footpath-less country roads. A lot of common sense and on-the-spot risk assessments had to be taken along the route. We had to cross over many times and assess the road ahead for blind spots. The drivers weren’t going to expect to see five people around the corner, so we had to try and eliminate the risk of serious injury, which thankfully paid off. To be fair we did get a lot of people waving and sounding their horns, but we also got a lot of angry, dare I say it, disgusted faces along the way. Usually by a disgruntled looking passenger than anything else. 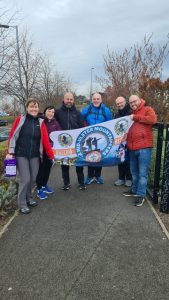 Pretty soon, we were coming along the Lough which was to our left-hand side, us of course going around the Lough anti-clockwise. Up until we got to Gawley’s Gate, somewhere between Lurgan and Aghalee, we had only caught near-distant glimpses of the Lough. 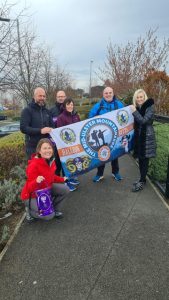 At that point, we didn’t realise, how lucky we were. Because that’s when the midges attacked. If they weren’t so annoying, they’d be a sight to behold. The sun lighting their tiny wings as they formed almost psychedelic patterns in the sky, moving in shapes that are far too quick and random for your brain to make any sense of. But boy are they annoying. Bumping into you, biting you, and resting on your clothes and skin as if you were a moving vessel to carry them along as they take part in their ever-moving black waves. This was in the middle of a developed area. We felt sorry for the people who live there. Looking back it was nature at its best, but at the time it was a nightmare. One of us was concerned that it would be like this the whole time. It turns out it wasn’t, thankfully.

We discovered that a lot of people along the banks of the Lough own horses. A few houses have various show jumping obstacles with anything up to five or more horses in a nearby field. It was on the southeast of the Lough we came across some very friendly Shire, I think, horses.

When they spotted us, they automatically started to playfully gallop and jump, nod their heads and approach us curiously. These times are when the big kid in us comes out and we all turn into giggling children, fantasising about riding horses through plains or jumping through hedges in the countryside. We could have spent a long time with these beautiful animals but we had a time-dependent mission to complete. 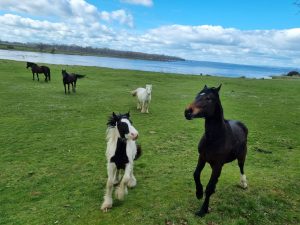 Another frequent animal we encountered was dogs. More notably Schnauzer dogs. It seemed they were at every other house and were extremely territorial. Other dogs we have seen, which some of us hadn’t seen in ages were Dobermann. We thought they were extinct. Not to be seen since the 80s. Like the canine A-Team.   On day two we were privileged to spot a mob of fawns racing through the trees at Antrim Castle Gardens, we all stood open-mouthed. Surprisingly none of us took our phones out to record it. We were way too mesmerized and didn’t want to miss the fleeting moment of grace.

On day three we bumped into a courageous Hare who stood his ground for a long time as we approached. Right up until I got too excited and bellowed out “here! Look! A hare!.” That was too much for the brave hare and he wisely took off. An unsettling animal that was a constant was buzzards. They seemed to be everywhere like they were hoping for our demise. They underestimated their potential victims.

After Gawley’s Gate, we stopped at a farmhouse where a kind family allowed us the use of their front wall to rest our legs, offered tea, and a toilet, and gave us a kind donation. It wasn’t the last donation we received. We also were given money at our first B&B in Antrim. The lovely owners, one of which is an elderly gentleman of German descent and a previous professional walker who has competed in distance walks around the world. Also, we received a donation from the staff at Ballyronan Marina, a lunch stop on our third day. We met some lovely people and some downright eccentrics. I believe we were a collection of both anyway so they saw us as kindred spirits.

The scenery around Lough Neagh is a mixed bag. Some rolling fields, some housing developments, lots of nice houses, and an abundance of smells, especially as it is silage season. The dominating factor is of course the Lough. Its tidal waves, the weird smells, and the wildlife that lives by its shores are breathtaking. We would have liked to see more of the Lough but the roads have other ideas. They twist inland and towards the shore practically the whole way. Some roads were barely a car wide, most were busy, and almost all had no path. We walked in single file a lot of the time. It was these times when the talking was at a minimum and we entered into our heads with the niggling thoughts and awakening of where we are sore or how much we are tired. 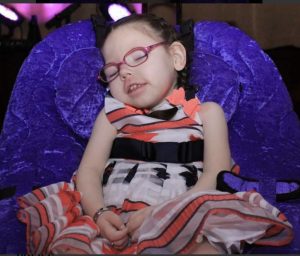 The five of us of course already know each other. We’ve spent many hours in the Mournes and socially to know what we are all like and what makes us tick. We know each other’s strengths and weaknesses and most importantly, craic levels. The last thing anyone wants in a three-day, 75-mile hike is someone who is going to suck the life out of you. If you already know you are struggling why would you want someone to remind you of that? No, you want someone to pick you up, tell you you are a big Jessy, and pull you out of the hole. That’s what we are like, to a man, and woman. 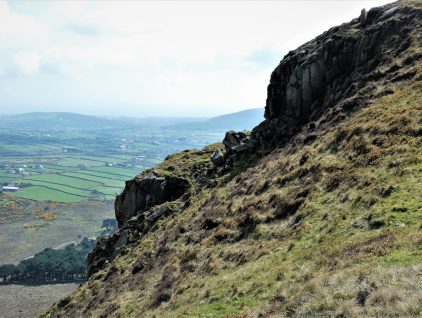 Injuries were never far away. We all had the pains, climbing the hills every other week certainly stood by us and certainly was the mitigating factor for the confidence that we could even take such a challenge on. One such member stood out from the rest. Sandra. Sandra picked up an injury on day one and carried the injury as it got progressively worse over the next two days. She had a bigger stake in this challenge, this was in memory of her little daughter whom she lost at a young age, it was the domineering thought that kept her going right to the end. Even with injuries to her feet and legs, she carried on with great grit and determination. Our soreness was nothing to hers. We mostly remained silent if we were in pain. It was awe-inspiring to witness that kind of willpower. 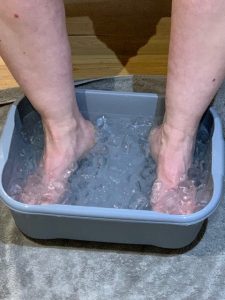 On day three, we set off from Ardboe to make our way to the finish at Portadown. Some family and friends met us on the way back and at our starting point, along with our local MP for Upper Bann, who brought us easter eggs. We were all elated and knackered. It was a massive undertaken for some lowly fortnightly hill walkers and we raised some money for a well-deserved charity. Will we do it again? No, it will have to be something bigger and better, ill come up with something on my next hike.