Sallagh Braes circular: a stunning route in the Glens of Antrim 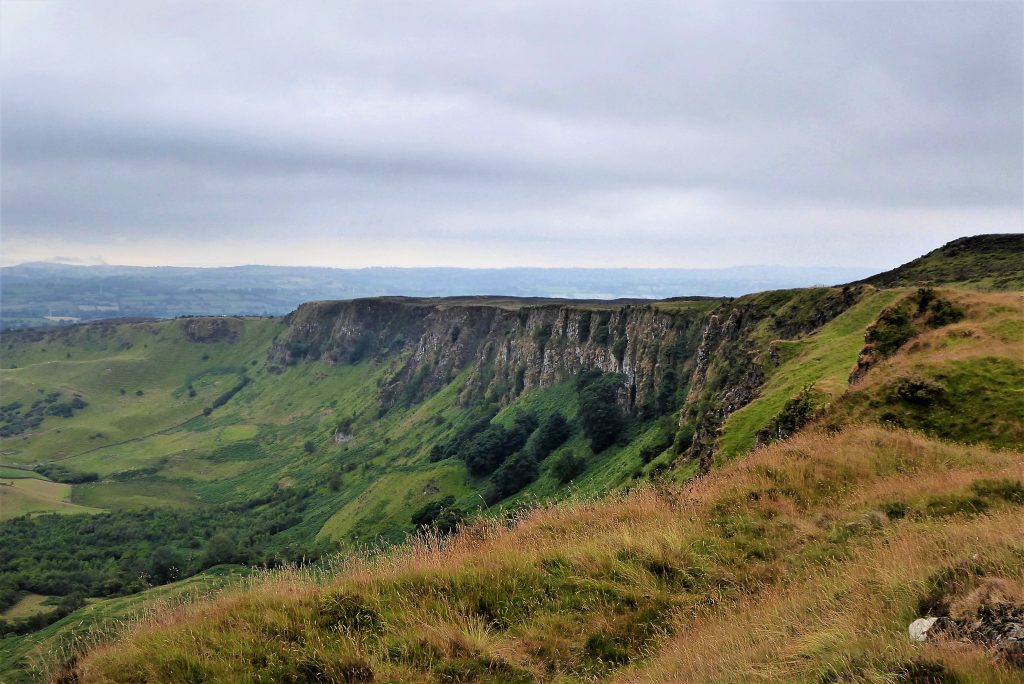 This is a circular walk mostly on quiet country roads in the upper reaches of Glenarm Glen, beginning at Feystown Road Car Park about 2½ miles outside the village of Cairncastle. It is a moderately strenuous hike with some quite steep sections on the roads. The highlight is undoubtedly the Sallagh Braes, with exhilarating views over Ballygally Head and beyond to the Irish Sea and the Scottish coast.

Turn left from the car park and continue for about 1.5km enjoying the views to the north before turning left at the junction with Loughdoo Road.

You are now on the fringe of the Linford Water Valley with views that should include Slemish to the west and Trostan to the north. Unfortunately, on the day of this walk recent dry, warm weather had been supplanted by misty, overcast conditions and it was difficult to make out the nearby hills. The mist was to come and go for most of the walk, but blue skies were rarely on offer. However, the cooler conditions made walking more comfortable. 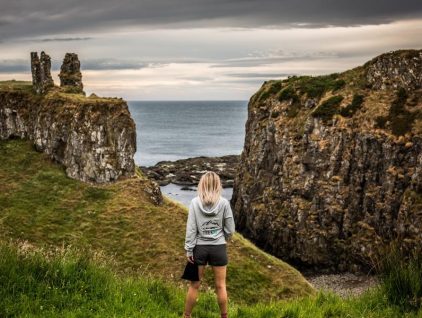 SHOP: Hoodies made from 100% organic cotton

Loughdoo Road continues for about 3km with hilly moorland scenery on the left, fertile farmland on the right and verges brimming with wildflowers. The road takes a gradually increasing uphill gradient until it travels downhill to reach a junction with Mullaghsandall Road. 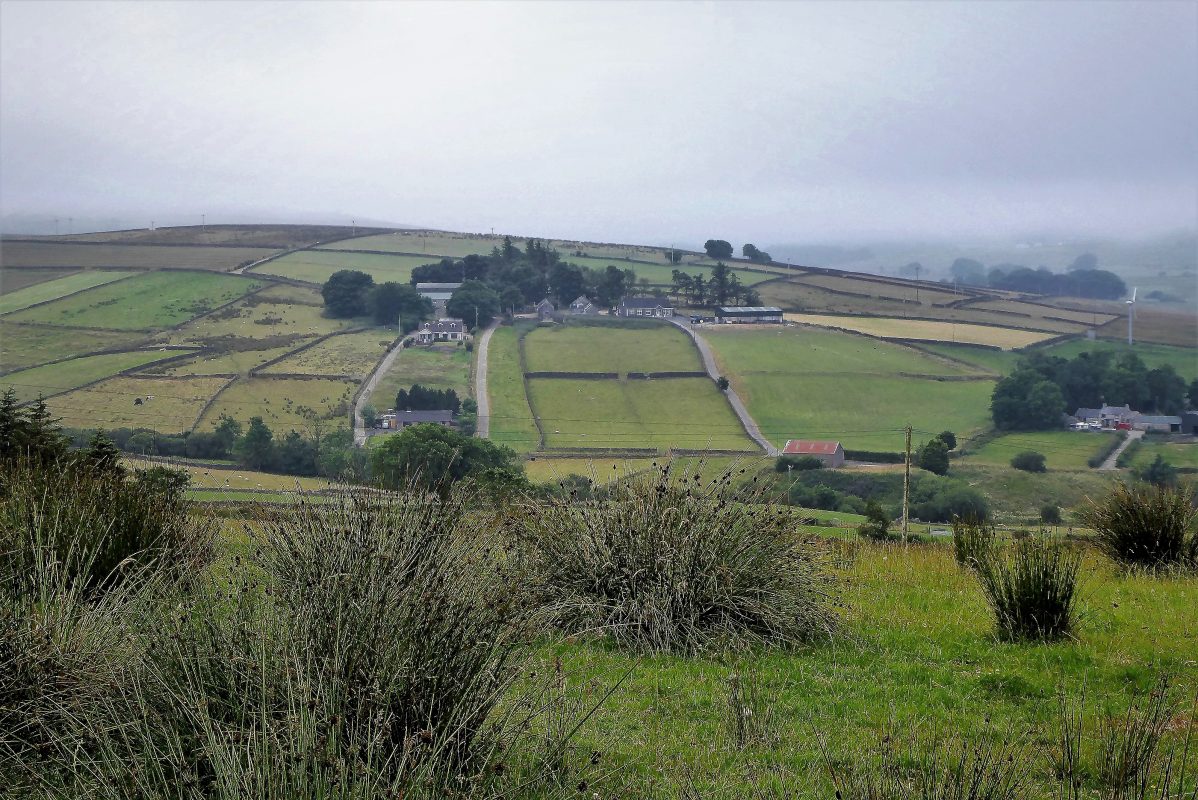 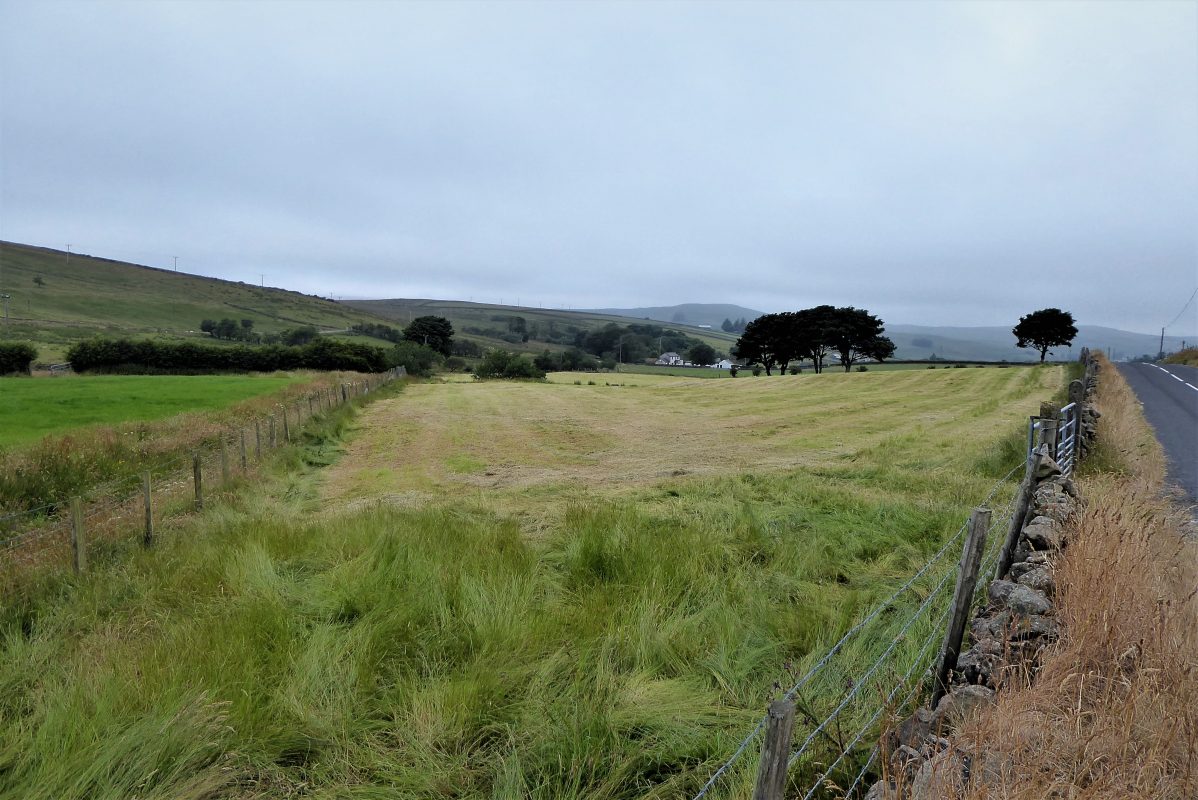 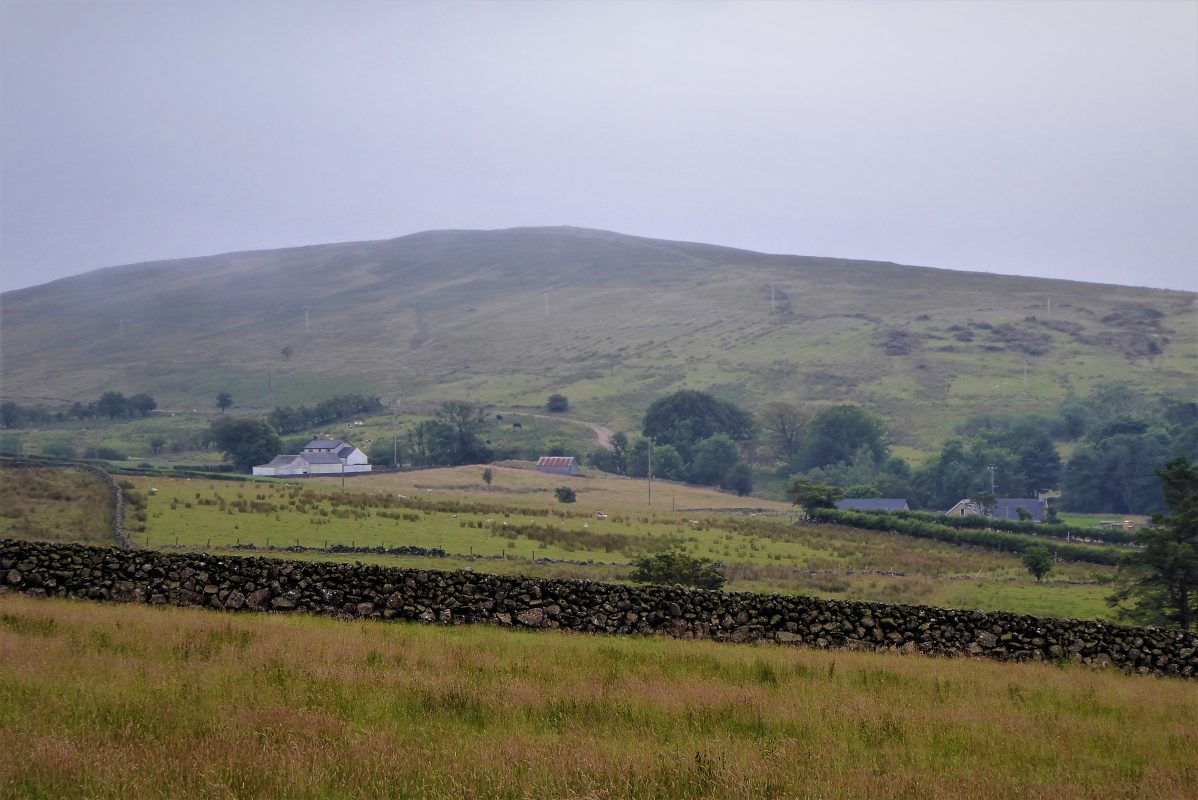 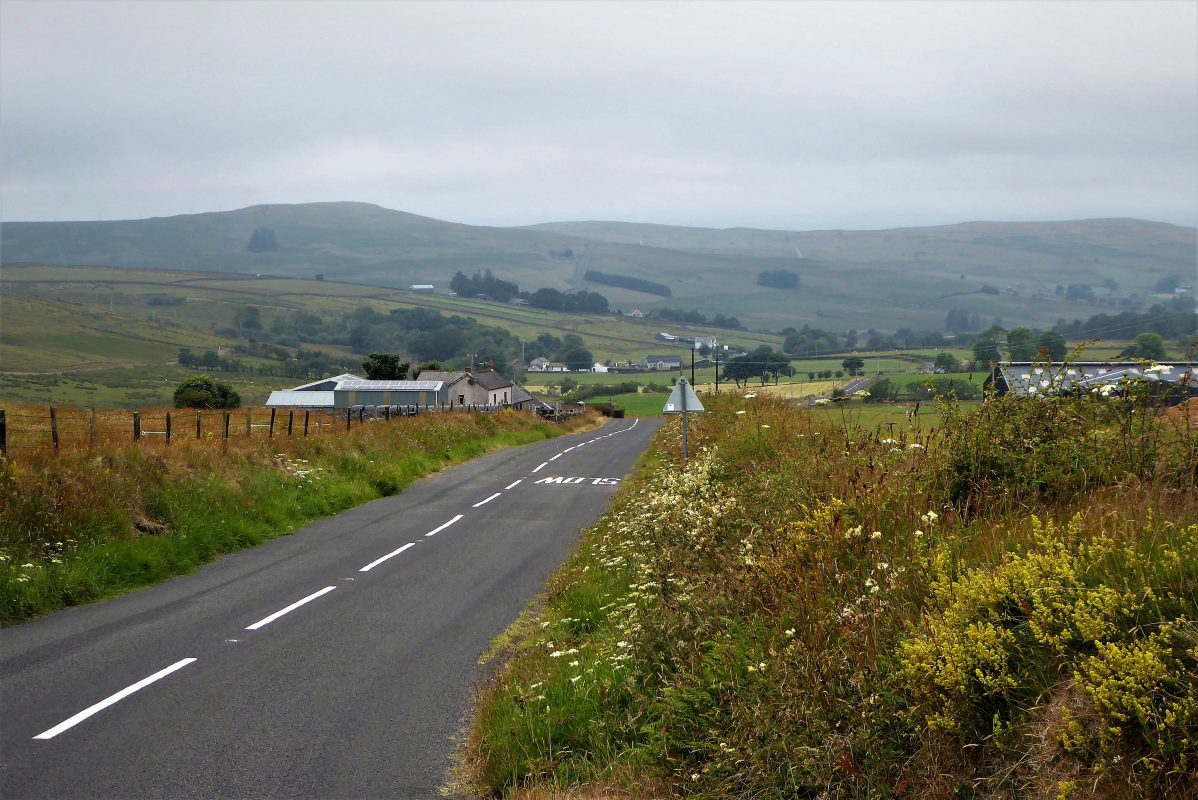 Turn left and continue on Mullaghsandall Road which again takes a gradual uphill course reaching a height of 350 metres. In clear visibility, the views will include The Mournes, Cave Hill, Islandmagee, Agnew’s Hill and the Ayrshire coast. Look out for a standing stone in the middle of a field on the right commanding a dominant position over the surrounding countryside. Unfortunately, the standing stone does not seem to be accessible as a stout barbed wire fence runs along the field perimeter. I called at a nearby farmhouse to enquire about access, but there was no reply. 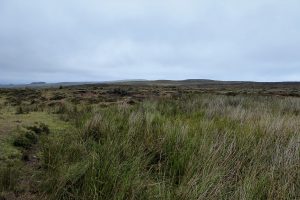 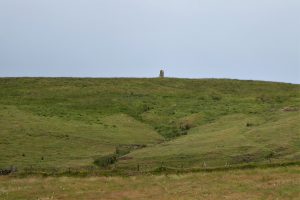 About 500m from the standing stone an Antrim Hills Way sign directs left to a path that takes a course through several gates before reaching a stile that leads to open moorland (Pics 14,15,16,17). 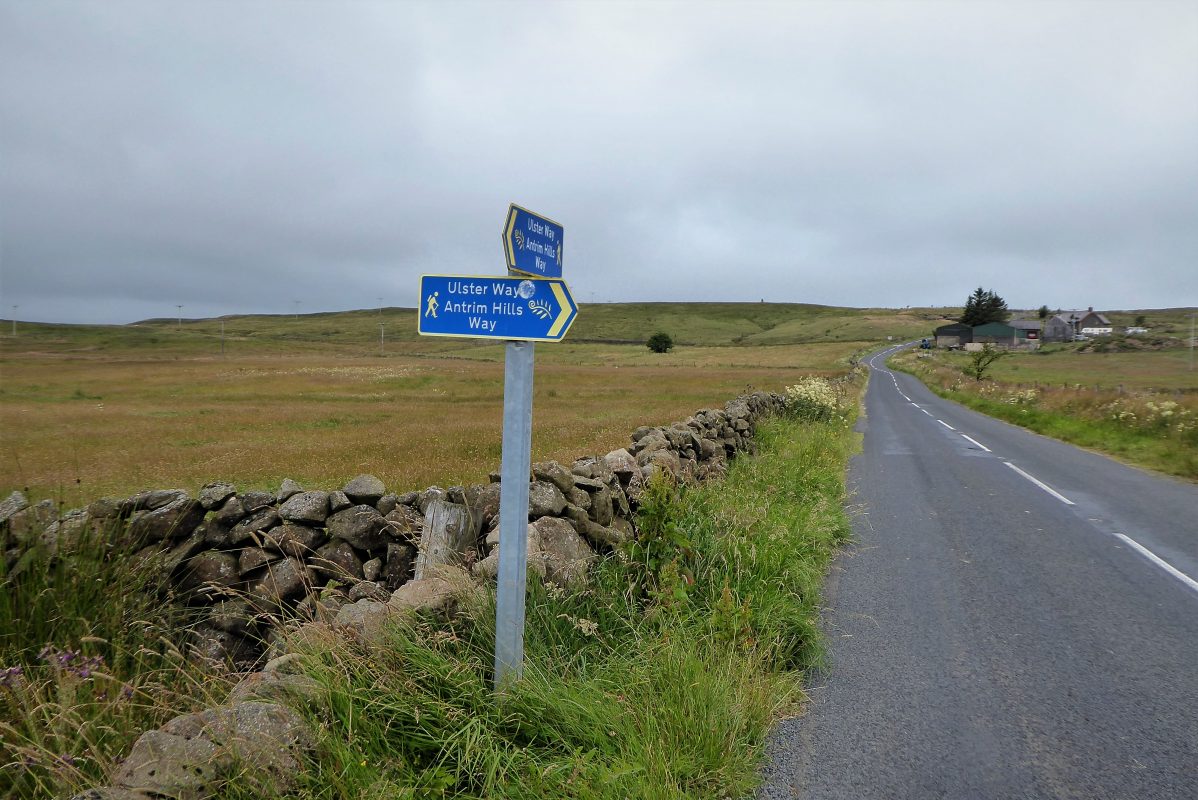 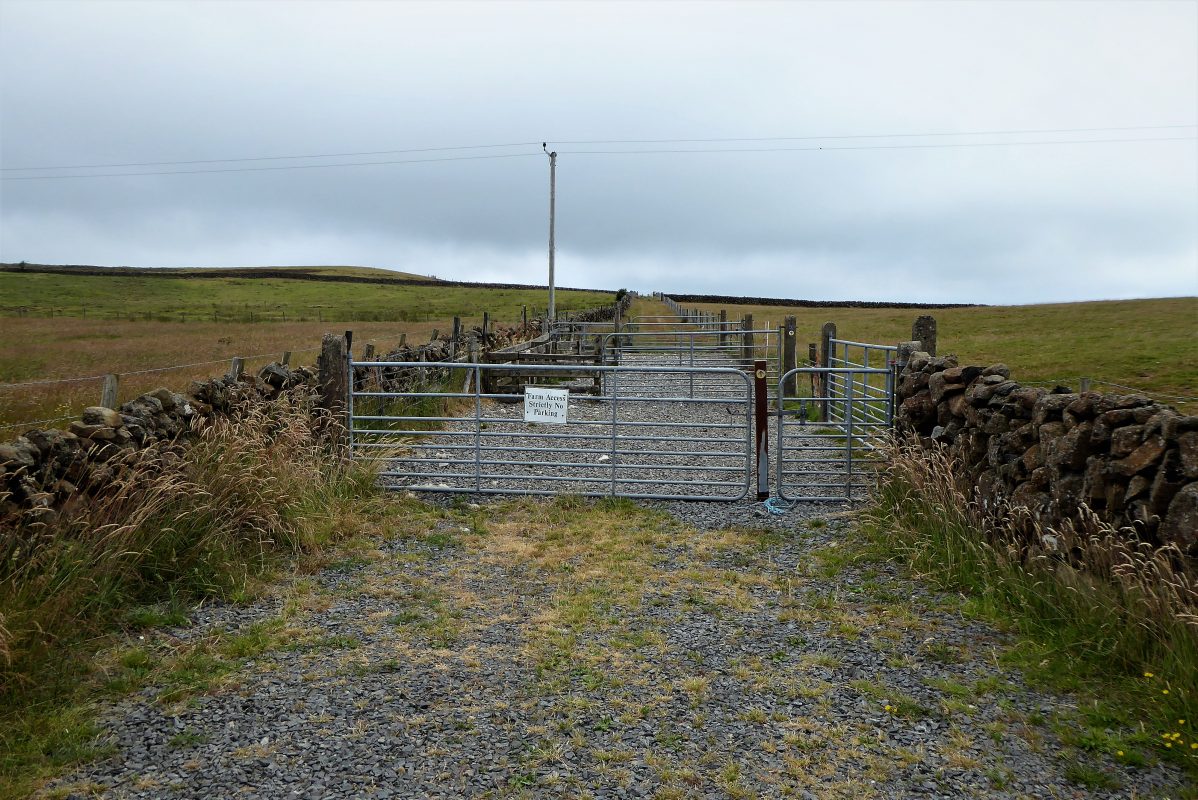 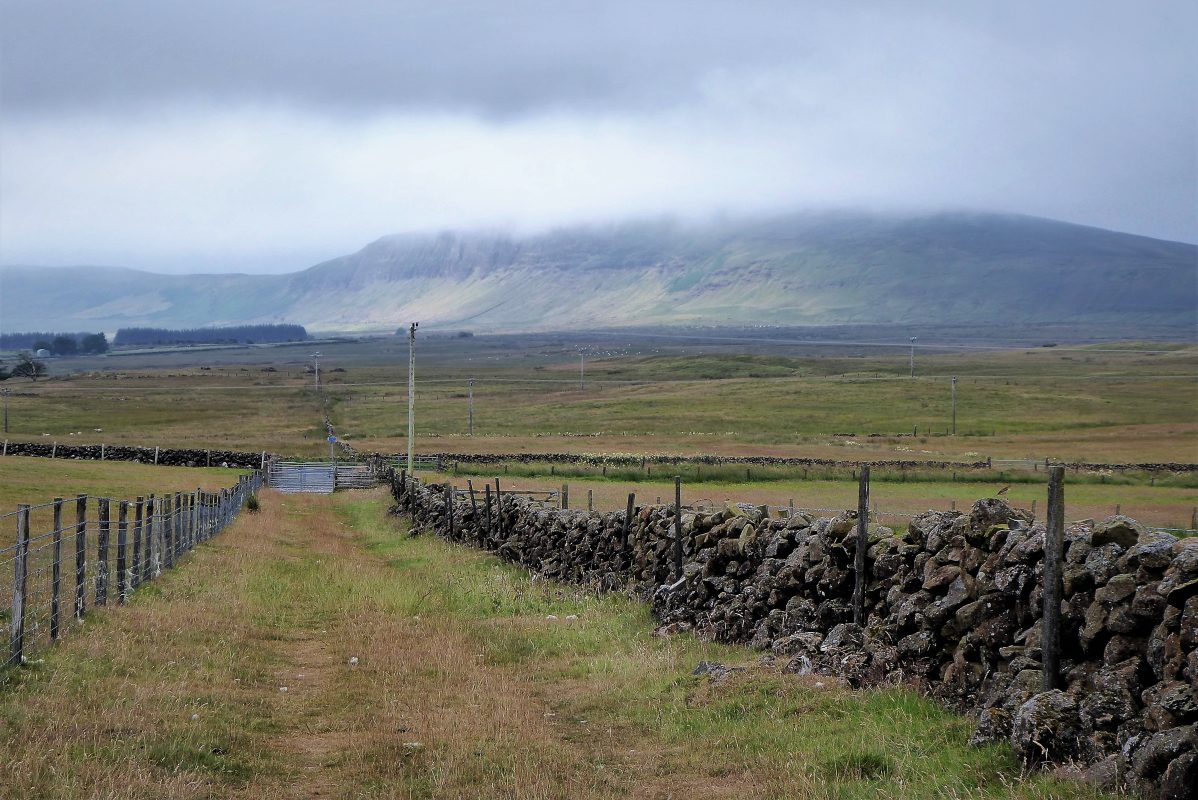 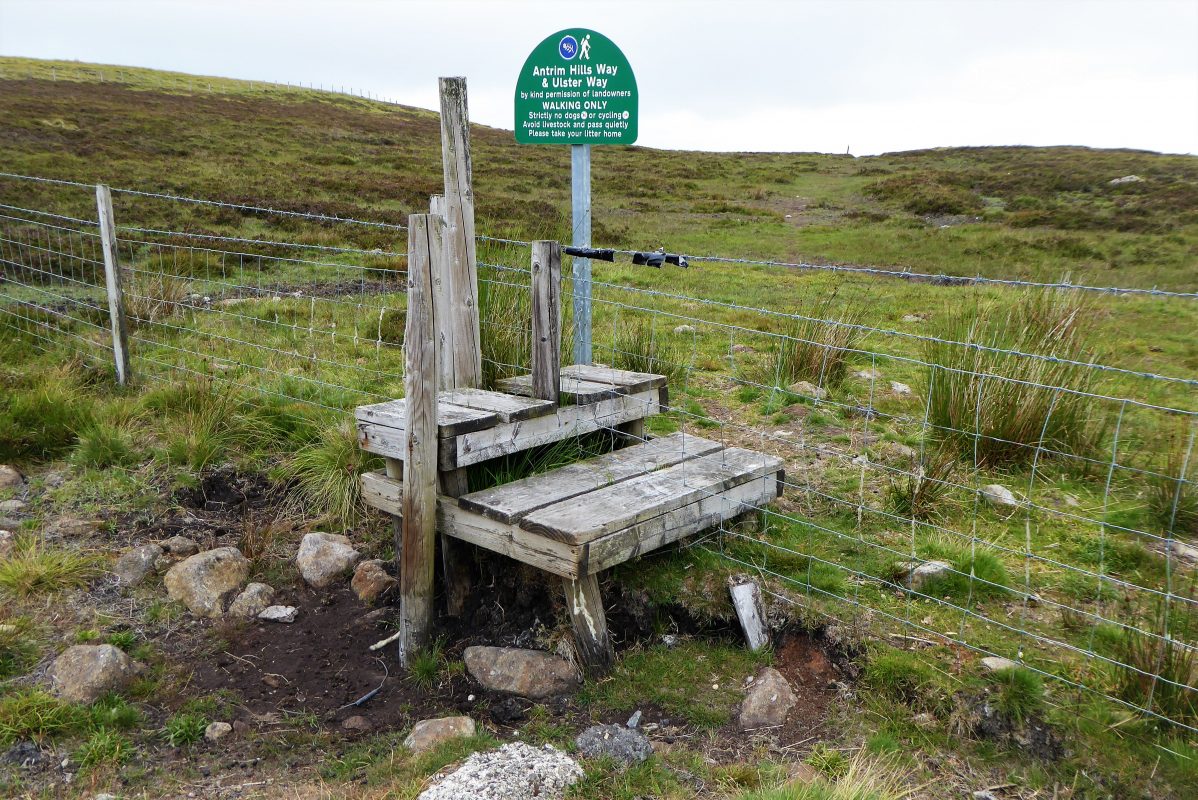 The desolate landscape contrasts sharply with the fertile farmland of the Linford Water Valley, but it is appreciated by the many sheep who will probably be your only companions as the views open out over Larne Lough, Islandmagee and Ballylumford Power station. 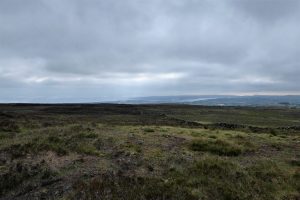 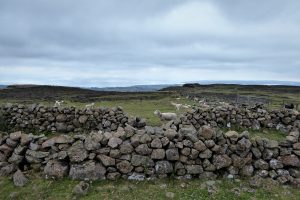 The Antrim Hills Way waymarkers will be your trusty guide for the remainder of the walk. The markers are showing their age and some have been toppled, but they do their job adequately, being laid out so that when a marker is reached, the next should be visible. A short walk across the moor takes you to a stile that leads to the Braes. A clear path runs along the crest of the cliffs with a sturdy fence to deter adventure seekers and sheep from getting too close to the edge. This has been only partially successful given the informal paths, known in the trade as desire lines, that have developed along the cliff edge. 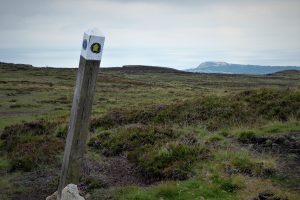 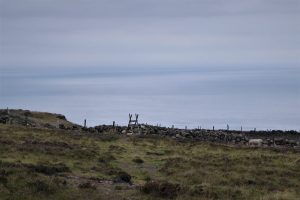 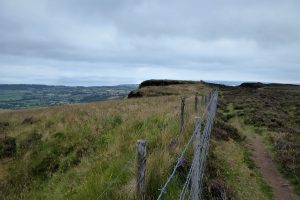 To the south-east, the Braes trace a wide arc as they swing gently round to reach lower ground that stretches towards the North Channel. The northern aspect is dominated by the remarkable topography of cliffs, ravines and scree formed by huge landslips which occurred as a result of glaciation. The view to the east picks out the patchwork of fields beneath the cliffs leading to the village of Ballygally and Ballygally Head. 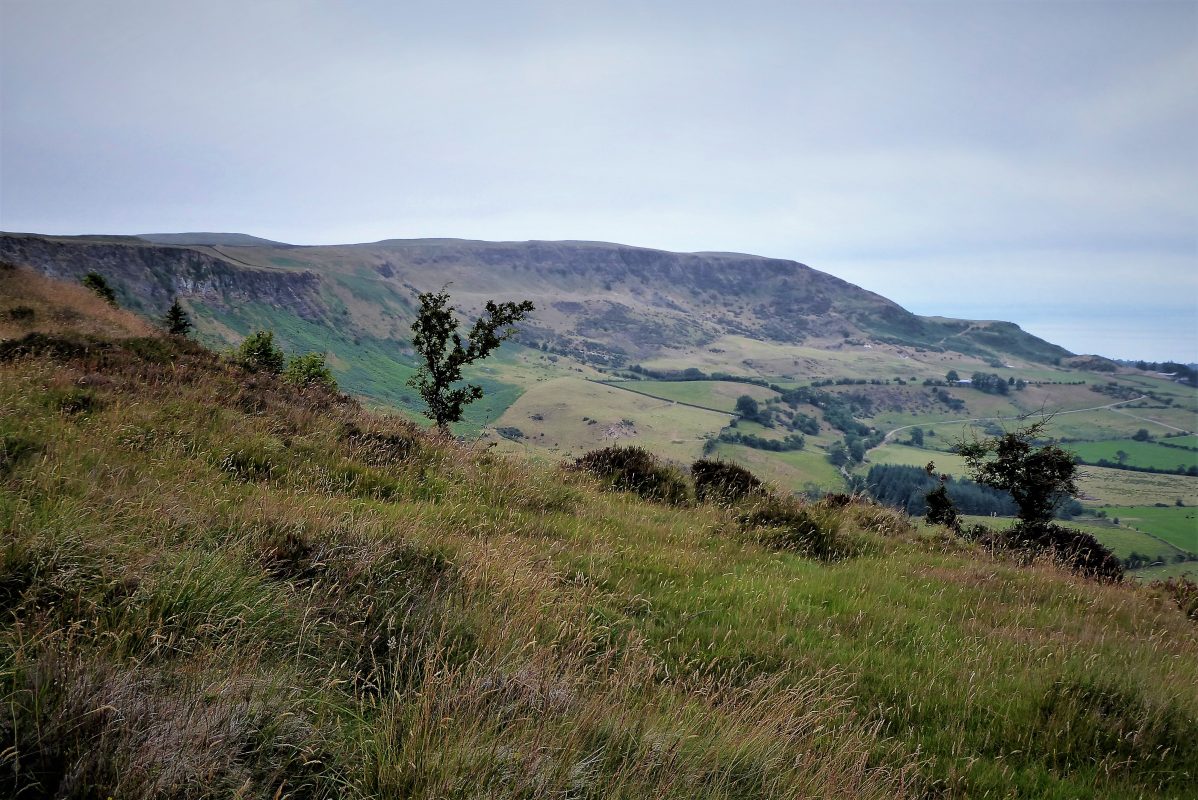 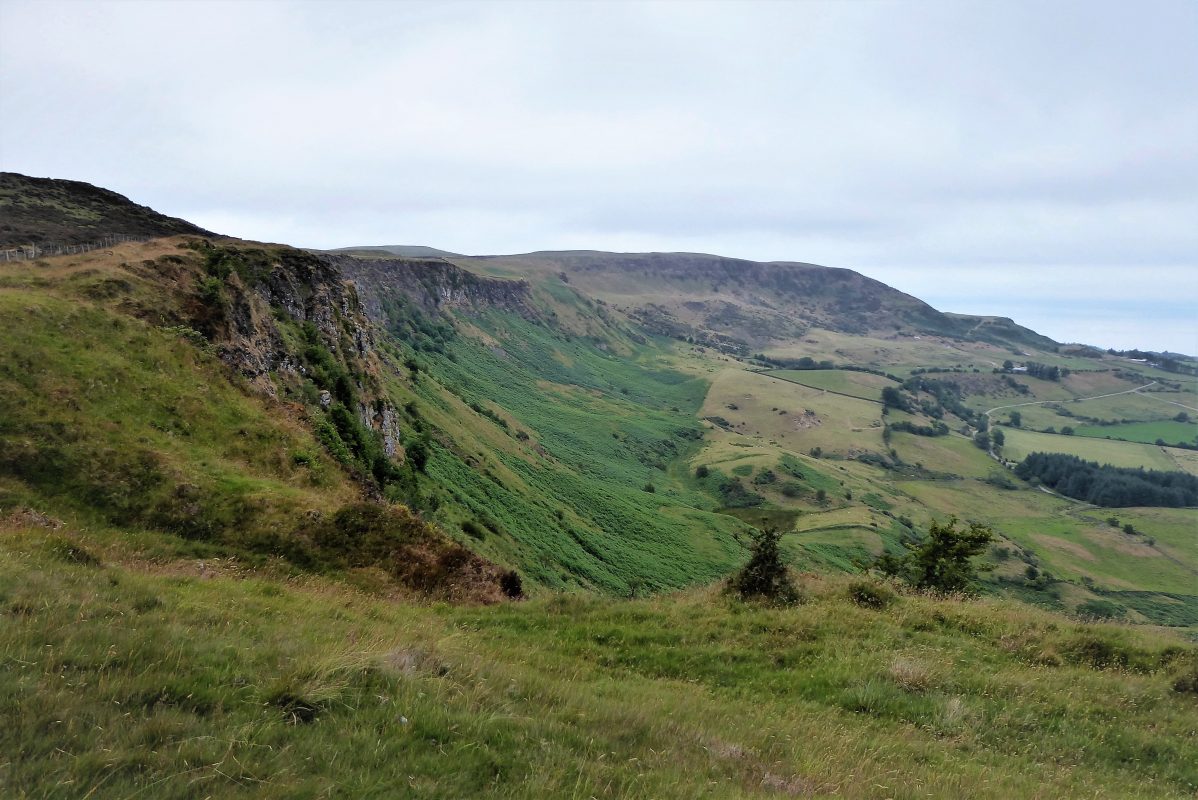 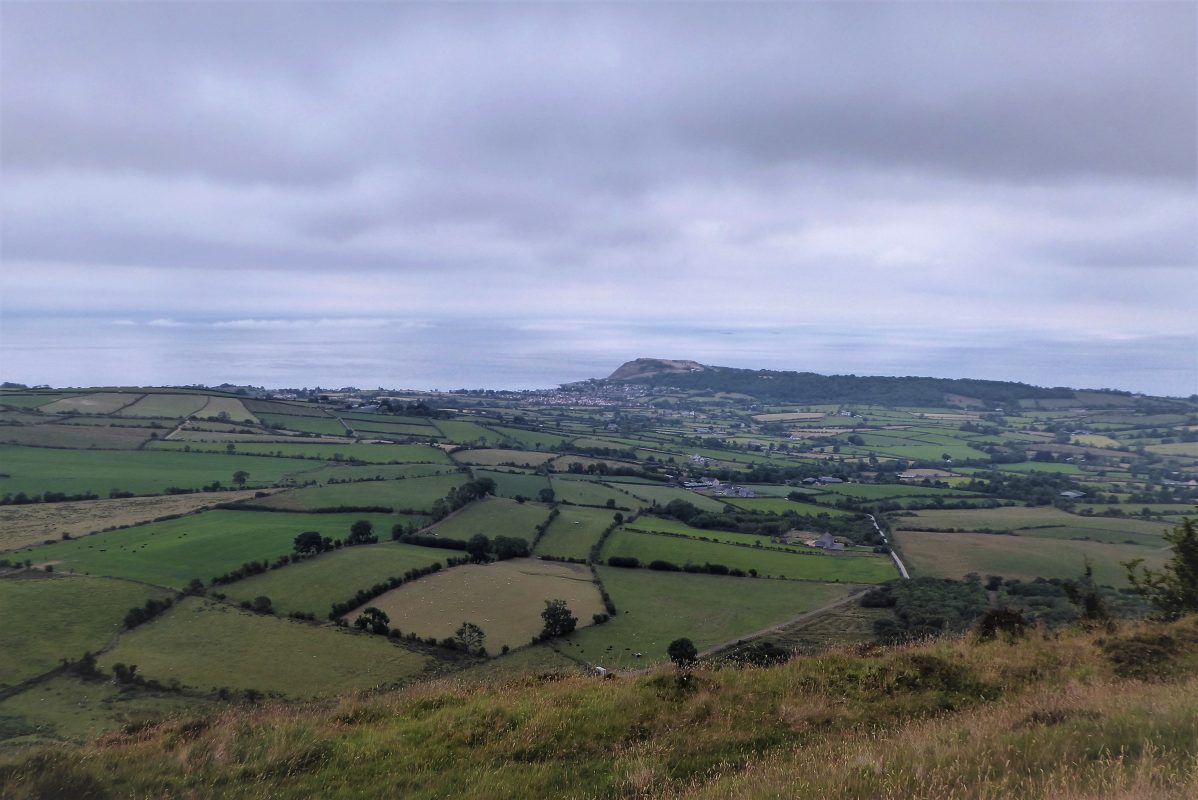 Knock Dhu and Sallagh Braes has been declared an Area of Special Scientific Interest (ASSI) because of the variety of geological features, habitats and species that the site supports. A summer visit confirms the number and variety of wildflowers that make their home there.

The path gradually draws away from the Braes and leads north towards a stile. It then follows a north-western course inland past Robin Young’s Hill. 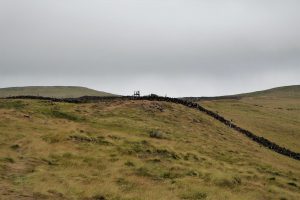 As the car park comes into view, the hills to the north pierce the skyline with Scawt Hill prominent. The path descends to the car park and a stile where an information board indicates the route of Section 3 of the Antrim Hills Way (presumably this is out of date, as the WalkNI website describes a different Section 3). 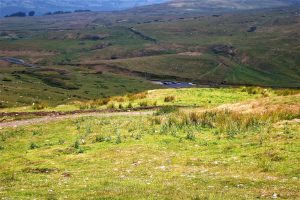 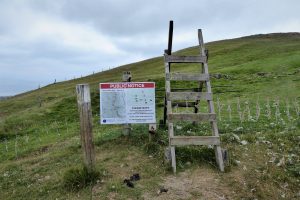 To the east of the car park sits the promontory fort of Knock Dhu, with beneath it a film-set for The Northman, starring Nicole Kidman and, intriguingly, Björk. The area has also been used as a Game of Thrones location as explained on an information board at the car park. 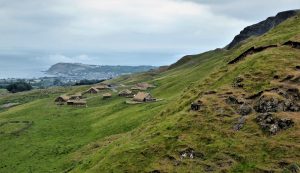 The quickest route is to join the A8 for Larne at Sandyknowes Roundabout and continue until the exit for Cairncastle/Millbrook, B148 (Drumahoe Rd). Continue on Drumahoe Rd until it meets Ballymullock Road. Turn right onto Ballymullock Rd and stay on it until reaching Sallagh Rd on the left. Turn onto Sallagh Rd until it meets Feystown Rd. Turn left and continue to the car park on the left (also known as Linford Car Park and Viewpoint).

For a more scenic option, take the Antrim Coast Rd to Ballygally and take the road to the left for Cairncastle. Turn right at Cairncastle onto Drumnagreagh Rd, then left after a few metres onto Ballycoose Rd which soon merges into Feystown Rd.

…you enjoy a quiet, peaceful road walk with a magnificent off-road finale in the form of the Sallagh Braes. The roads are very quiet, but not traffic free so the walk might not be suitable for large groups. Ground conditions on the Braes are very good, but some mud can be expected in wet weather. 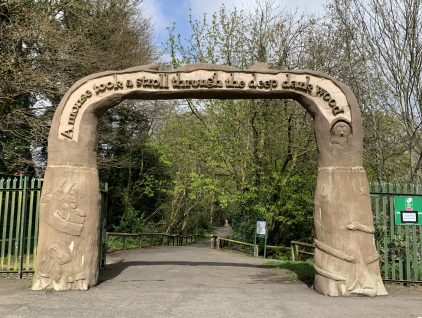 The Antrim Hills Way is a 22-mile trail crossing some of the most scenic upland areas in the Antrim Coast and Glens AONB. It starts in Glenarm and ends at Slemish. The highest point on the route is Agnew’s Hill (474m) which commands a view of almost the entire Way. More information at Antrim Hills Way – WalkNI

Channel 4’s Time Team undertook an excavation of the area with the assistance of Queens University and the Northern Ireland Environment Agency in 2016.  The Team uncovered a number of Bronze Age artefacts during the dig as well as the remains of a village and a number of houses.