A Pew with a View: Curraghard, Tollymore 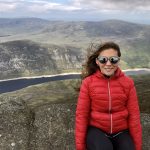 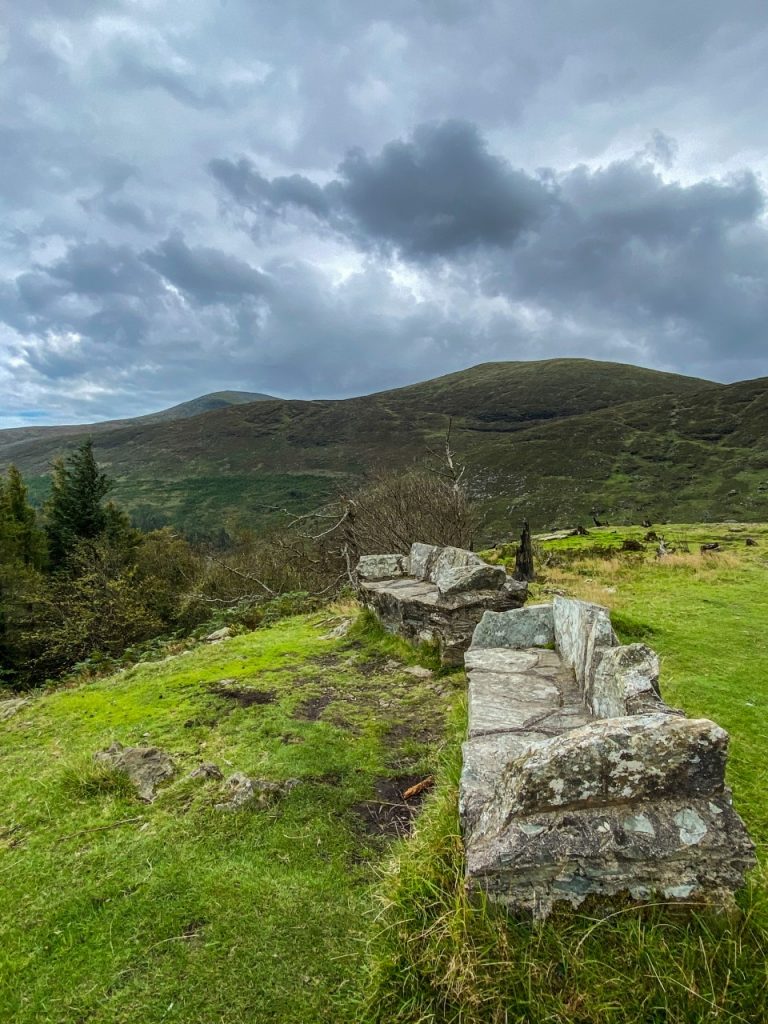 Like many other families looking for things to do locally at the moment, we decided we would take up camping this year. Our first experience involved a very wet night and a tent last used by my teenage self at a summer camp 20 years previous and consequently, the less said about that night the better…

One brand new tent and enough time to let the memories fade later and we were booked for Tollymore for a last hurrah before school started back.

Ever the organiser, I had big plans for the day – before we camped, we were going to get the children up Donard! They are 11, 8 and 4 and after a full summer of hiking, I was confident they would make it. But the best laid plans and all that, my husband took sick in the night and he was going nowhere. I would be a bit of a stickler for not changing the plans and carrying on regardless, but I knew it would be neither sensible or safe to try and get them up Donard on my own. So, not to have the whole day wasted, I needed a Plan B. 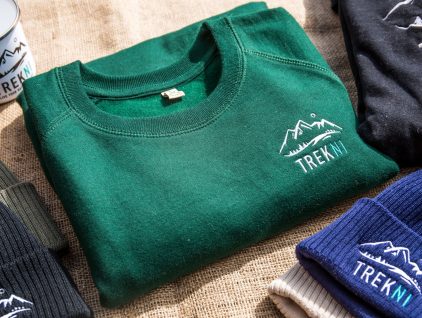 I have a thing for maps, I can while away hours studying an OS map. It’s the ex-geography student in me. Never let anyone tell you a Geography degree is a waste. I can read a map and I’m great in a pub quiz – absolutely money well spent I’d say!

I had a look at my OS and spotted a viewpoint symbol within Tollymore on what seemed to be a little summit called Curraghard. This also happened to be a few days after the Shimna burst its banks and took out the bridges, so I would also have to plot my own route! Up for the challenge, I plotted it on Viewranger and it looked to be around 7km, and I thought that seemed manageable.

We parked in the main carpark at Tollymore and headed towards the Old Bridge which is, as the name suggests, the oldest bridge in the park, made of stone, built to last and definitely still standing post floods. 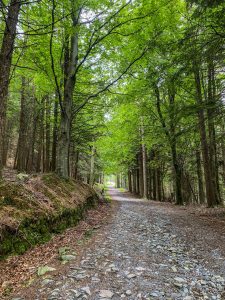 After the bridge we crossed straight across at the following three junctions, taking the higher path each time towards the boundary wall at the top of the forest. It’s times like these that I find a mapping app invaluable, because it will show you exactly where you are in relation to where you need to be at all times. If you have a little one with you, this long uphill stretch will be the hardest part of this walk and if your children are like mine, will involve endless drinks and stops for Jelly Babies. 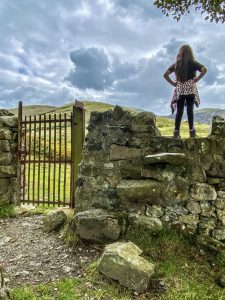 We stopped for a while at the stile at the boundary to admire the view. It’s absolutely stunning here with views to Commedagh, Luke’s Mountain and as far as Meelmore in the other direction on a clear day. I was able to point out Drinahilly over in Donard Forest where they had been a few weeks earlier. 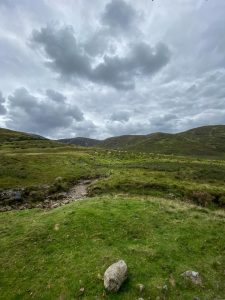 This next section follows the Mourne Way along the boundary wall for a bit. We followed the path past the stile, veering right at the next crossing for only a short distance when we found what we were looking for – nothing says adventure like a stone sign from 1826 etched with the words ‘To the Mountain Top’! 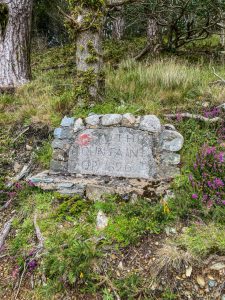 A little uphill trek to the top through many ferns and trees on what is definitely the road less travelled and we were there. And to my surprise we also found some stone seats at the viewpoint (perhaps more appropriately ‘stone sofas’), three in total – the perfect place for a sit down and a spot of lunch. 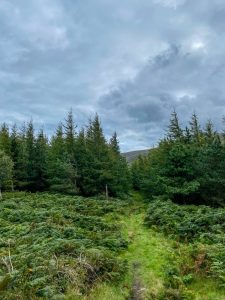 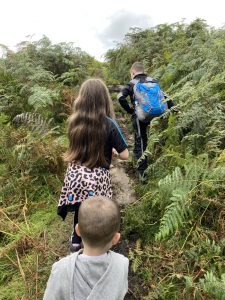 The views from Curraghard stretch one-way all-over Newcastle, Dundrum Bay and beyond and the other, across to Donard and Commedagh. 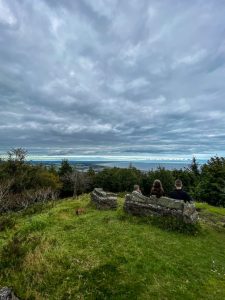 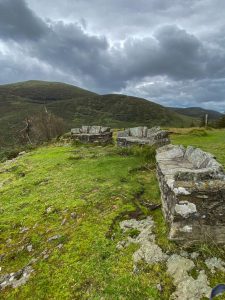 I did have a brief panic circling down from Curraghard to the main path, thinking my route plotting had let me down. But we got there, if a little awkwardly, over a lunar type surface and through some trees – what’s a first-time trek without a little bit of off-roading anyway!? You could just retrace your steps down to the stone sign again.

When back passing the sign, we veered right downhill and then took a left to loop back around the lower side of The Drinns. There is another viewpoint marked here on the OS but I couldn’t really pinpoint it. No matter, the little legs were tired now anyway and we met the path we had taken to the boundary earlier in the day and followed it down through the forest and back to the car. 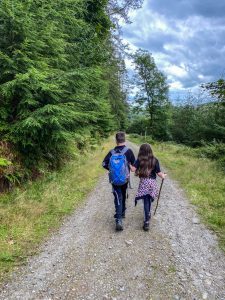 This route was 7.5km or 4.6 miles in old money and took me just over 3 hours with the children. If you’re new to hiking with your children, exploring within Tollymore gives a great balance of well managed paths and enough other people around that you won’t feel like you are on your own or too far into the wilderness, but you will still feel like you are in the heart of the mountains.

It was a delight to explore some of the lesser-spotted parts of the park. I’d spent years coming here as a child with my aunt in her touring caravan and clearly, I was a lazy child because I had never seen this area before. I have no doubt after this that there are other equally beautiful parts I’m yet to see and I look forward to exploring more. 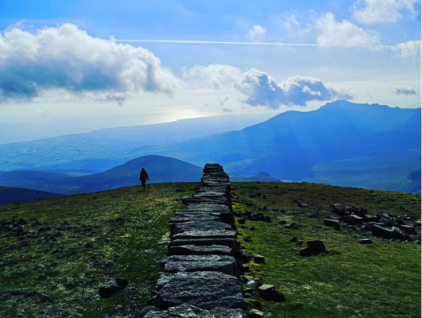 Daddy did make a recovery of sorts in the end. Enough to drive up and pitch the tent so the end of summer camping trip could be saved. And we survived the night dry and counted the whole thing as a win. And we did get our 3 champs up Donard very soon after!

We revisited this walk in advance of writing. And I’m glad I did because I can advise you that at this time of year this is definitely a job for boots! Wikipedia tells me that Curraghard literally means ‘marshy upland’ and I’d say that’s a fair assessment. The muck on the last stretch to Curraghard was a bit of a slog for small feet and short legs. If you favour hikes with better paths that are better underfoot, perhaps best to save this one for the spring!

I’m Laura, 36 year old Christian wife and mum of 3. I drag my children up mountains and force them to listen to 80’s music – I consider both to be character building!