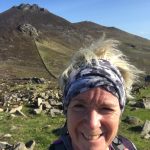 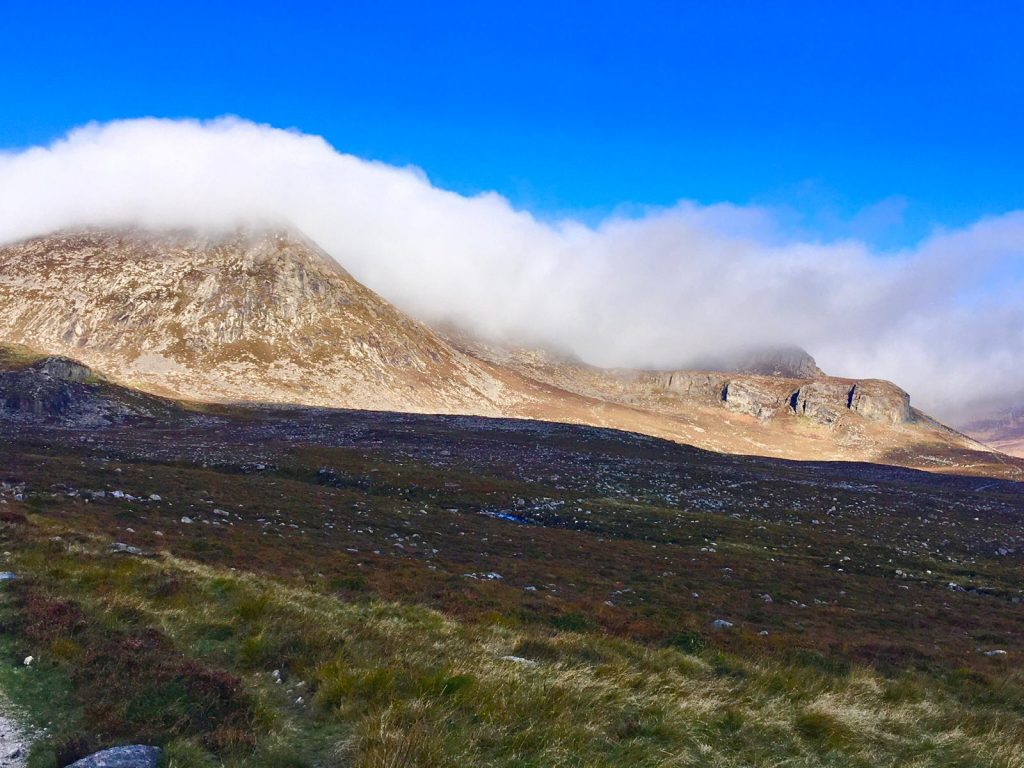 My brother contacted me last week: “How do you fancy a hike from Bloody Bridge, Slieve Beg, Cove and Lamagan, down to Blue Lough and back to Carrick Little car park?” Cue the emoji face with the raised eyebrow. “An early birthday present,” he added.

After absorbing the idea, I relished the thought of this climb and couldn’t wait to get started.

On Sunday 11th October, we met at 7am at an already full Carrick Little to park one car and quickly moved on to Bloody Bridge, our starting point. 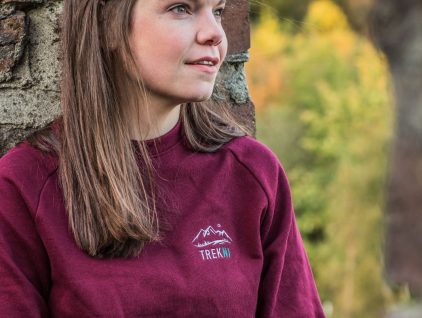 It has been a while since I have walked this route to the quarry, but you could never tire of it. A well defined path follows the river where you see waterfalls and water pools that look enticing regardless of the weather.

Follow this track until you come to the point to cross the river – there are large ‘stepping stones’, a short walk to a stile, climb over and you will join a ‘gravel’ type path that leads the way towards the quarry. This is an undulating ascent but is a good warm up. At this point we were fortunate to view the sunrise coming up over the horizon. 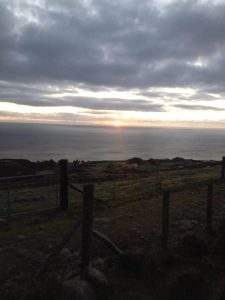 From the centre of the quarry you join a much walked route that leads you up and in the direction of the Mourne Wall at the foot of Slieve Donard. At this point we should have had spectacular views, but the weather was low cloud which resulted in low visibility and a wet, cold atmosphere.

With much determination and with much to do we carried on along the Brandy Pad. Due only to the fact that my brother knows the Mournes, we came to the point where we had to turn left at the the cairn (pile of stones), the start of the ascent to Slieve Beg. It was a short jaunt which brought us quickly to the top of the ‘Devils Coachroad’, (a climb we did together a few weeks before). Despite the ever increasing cloud, it was an amazing viewpoint of a famous part of the Mournes.

A readjustment to the clothing at this point as the temperature plummeted and the ‘mist’ was a little heavier – the gloves and raincoat were needed. We carried on to the next mountain (Cove), and with visibility low it was a case of ‘up and onward’.

However throughout we were aware of the mighty drop to our left, so we were careful to keep our bearings. I could feel the burn at this point but of course carried on to the cairn of Cove. On the rare occasion when the cloud would disperse for a few seconds, we were rewarded with amazing views before it came down again thick and fast. 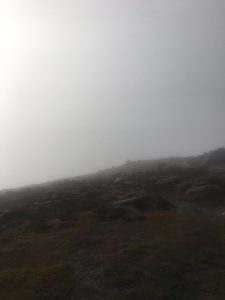 With Cove behind us and an outline of Lamagan before us (and with a few sips of my energy drink), we powered on. Another uphill climb following a well walked path and we reached the summit…or at least I thought was the summit, only to be told as the cloud cleared a little, “Nope, sorry, there’s the summit!”.

The temperature was cold, visibility zero, a wind chill of minus something (my cup of tea never tasted so good). With my fingers like frozen icicles we didn’t hang about for long and descended Lamagan towards the Lamagan/Binnian col. It’s a bumpy walk down and seemed to go on forever (and from nowhere), and I didn’t think there were singing angels but looking back there might have been. The cloud literally separated and there before me was Binnian/Ben Crom reservoir in all their glory and in cinematic 3D.

It was glorious: blue skies, sunshine and a lot more people, it was like we had got lost in a forest of mist and finally found the exit. Suffice to say we had to take the layers off and from that point made the very familiar hike back to the car at Carrick Little. 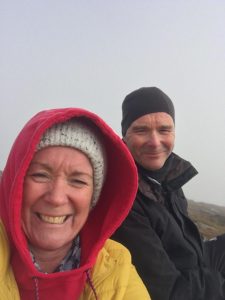 I was reliably informed we had covered 15km – not a bad birthday treat for a oul bird coming 51!

Hi, my name is Donna Teggarty or Mrs T. I work part time as an administrator for a day care centre for adults with learning disabilities. I have been hiking the Mournes for many years and love nothing more than getting outdoors with my husband and our two dogs, Molly and Ruby.