Belfast to Downhill: Driving the Causeway Coastal Route with Sixt 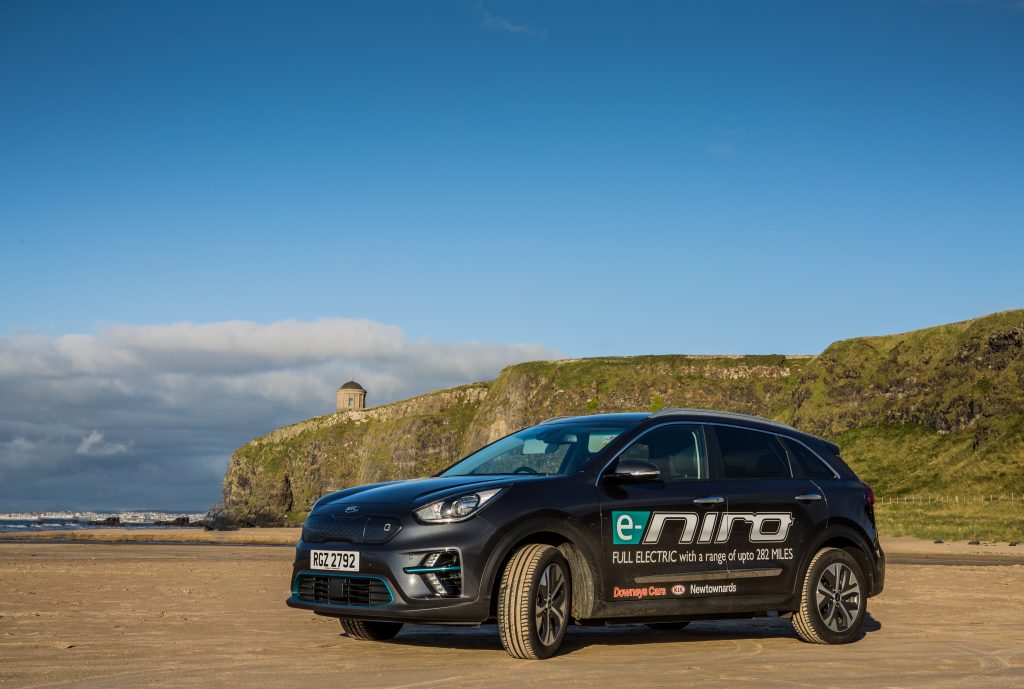 At Trek NI, we’re all about eco-friendly products.

So when Sixt offered us the chance to take the all-electric Kia e-Niro out for a spin, we just couldn’t say no. 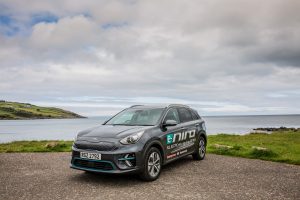 On a suitably cloudy Thursday in July (standard weather for this summer), Christine and I hopped in the e-Niro at Sixt’s pickup point on the Connsbank Road – super convenient if you’ve just arrived from Belfast City Airport, by the way – and began a 99-mile road trip that would finish at one of Northern Ireland’s most recognisable locations on the North Coast. 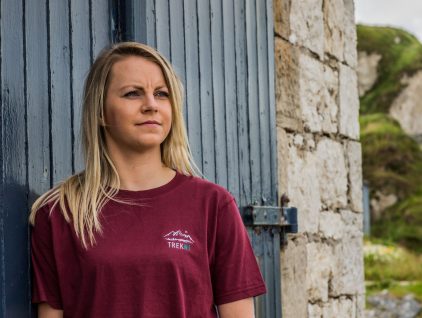 Disclaimer: while I’d driven an automatic before, I’d never been behind the wheel of a fully electric car until that day – it may have taken me several minutes to realise that just because the Niro wasn’t making a sound, it didn’t mean the engine was off. That was a slightly embarrassing start to the journey!

Suffice it to say, though, it’s an amazing car to drive. Once you become accustomed to how smooth and quiet it is, you’ll gladly forget you ever drove a petrol-fuelled, manual vehicle before. 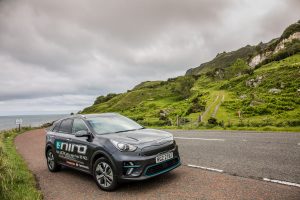 I’d meticulously planned out our route earlier that week. Our first stop was Carrickfergus, where we pulled in for a look at the castle. It’s well worth a proper visit, especially if you’re a history buff. We’ll definitely return for another visit someday soon. 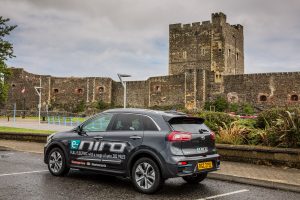 From there, we headed directly north until we re-joined the Causeway Coastal Route, a 120-mile drive from Belfast to Londonderry that takes in the entirety of our world-famous North Coast. We chose to bypass a little section that day in order to save time, but it’d certainly be worth including it if you’re planning on doing the full route yourself. 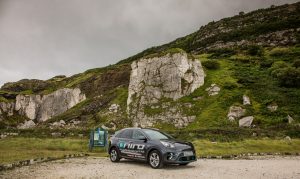 After passing through beautiful Glenarm, we came to Carnlough (our second stop for the day), which boasts one of the most picturesque little harbours in the country. If you’re a Game of Thrones buff, you may also recognise it as a filming location frequented by Maisie Williams in recent years. 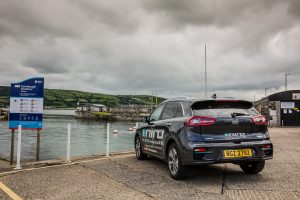 There, we grabbed lunch at the Harbour Lights Café, followed by a quick caffeine fix at Twilight Coffee and Bunkhouse (one of our partners!), before hitting the road once again.

Travelling further north, we paused briefly at Cushendun to admire the views (seriously, how nice is this country?) and would have petted the friendly roadside goat if the kids weren’t hogging it (never thought I’d write that sentence). Oh, and of course there’s another Game of Thrones filming location there too – find out more here. 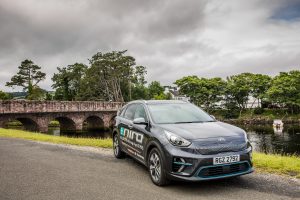 From Cushendun, we headed north-west to Ballycastle across the Antrim Glens, making occasional stops along the way to snap a photo or two, and then on to Ballintoy Harbour. 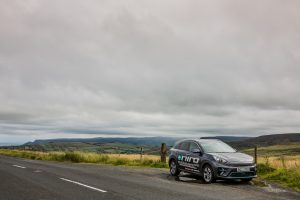 If you haven’t visited Ballintoy, where’ve you been? It’s the perfect place for a spot of fishing, kayaking, coasteering, or just munching on some sugary goodness at Roark’s Kitchen, right next to the water. It’s also worth taking a dander out to Elephant Rock if you have the time (it’s the one that looks like an elephant). 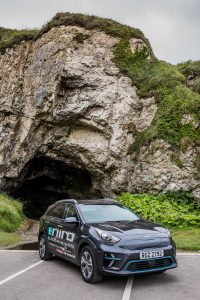 We continued west along the coastal route in the ever-silent e-Niro, taking in Dunseverick, Bushmills and Dunluce Castle along the way. An attempted snap-a-roo at Magheracross Viewpoint was thwarted by poor visibility and we were starting to get worried that our final destination for the day would be a washout, with dark rainclouds rolling in from the sea. 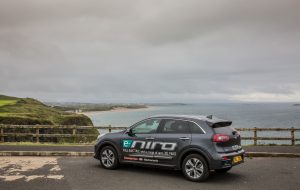 The threat of impending precipitation hadn’t dampened the spirits of the Portstewart populace, however – plenty of folks were strolling the promenade with their ice-creams and coffees, and we even spotted someone wearing a Trek NI hoodie, which was quite exciting for us as a small business!

Looping round Coleraine, we entered the home stretch. And low and behold, just as we descended towards Downhill Beach past the gates of the demesne, the sun finally broke through the clouds and lit up Mussenden Temple on the clifftop, giving us that awesome shot we’d been hoping for all day. 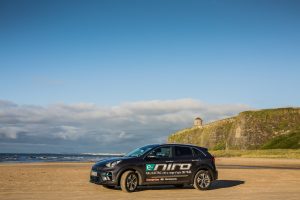 The Causeway Coastal Route is fantastic, and one that you should definitely try to get under your belt if you can. We didn’t manage the full version of it that day but the parts we were able to tick off were stunning, and having the opportunity to do so in the wonderful Kia e-Niro was a dream.

The only downside to the whole day was having to give the car back at the end of it!

We’re delighted to partner with Sixt to offer 5% discount on any bookings made through Trek NI. Get your discount here.