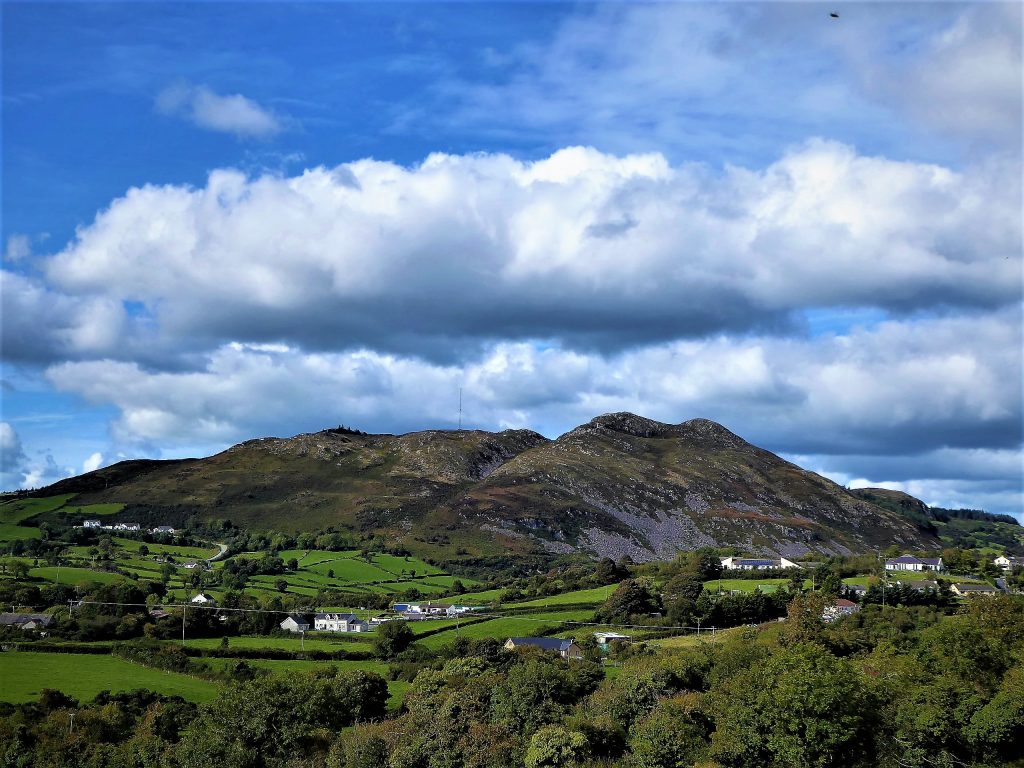 Thirty years ago, even the most intrepid walker would have flinched at the thought of a walk in south Armagh. However, the advent of peace has removed any lingering fears and the area is now a haven for those who enjoy a quiet walk in fabulous, unspoilt scenery. The adjoining County Louth provides a seamless bridge to further delights for the walker including the beautiful Cooley Mountain range.

The aim of this article is to offer a snapshot of suggestions for those who have yet to experience walking in what is a vastly underexploited area. You will need your own transport to try any of the four walks described, as bus services in the area are very limited and infrequent. All four walks are quite short, but they can be easily extended, curtailed or adapted according to individual preference. Directions to each starting point assume that the walks will be tackled in sequence. This is unlikely to happen, but there should be enough information to enable you to get to any of the starting points wherever you travel from.

The starting point for the first walk is the Flagstaff Viewpoint, not far from Newry and a favourite spot for photographers. The viewpoint has a large car park and is the launch point for Section 2 of the Ring of Gullion Way.

The Ring of Gullion Way is a 36 mile circular route followings off-road trails, country lanes and forest tracks from Newry around the volcanic landscape of the Ring of Gullion AONB, an area rich in history, archaeology and legend. The Ring walk suffers from neglect in parts and its waymarking leaves a lot to be desired. However, careful study of the WalkNI route description and the OS map for the area will reward the determined walker.

Leaving the car park, turn right onto Ferryhill Road and continue for about 1km until you reach a narrow road on the left with a sign for Clontygora Cairn. Turn into the road and after a few metres, on the right, you will see the glorious Clontygora Court Grave. The Neolithic tomb is one of the most atmospheric monuments in Ireland, conjuring up images of life, death and culture 30 centuries ago.

Carry on up the quiet, scenic road following the waymarkers for the Ring walk, taking a left turn onto Clontygora Hill, an excellent vantage point for great views of Slieve Gullion and the surrounding countryside. 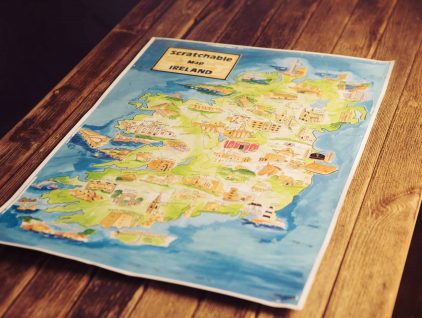 From the Flagstaff car park, turn right onto Ferryhill Road and continue straight ahead, crossing the border (you’ll hardly notice) to eventually reach the R132. Turn left and, at the roundabout past the Carrickdale Hotel, take the road for Ravensdale (still the R132). After about 2km, turn into the forest car park. This area is known as Marble Bridge; it marks the end of Section 2 and the start point for Section 3 of the Ring of Gullion Way.

Ravensdale Forest is a popular venue, but very rarely crowded. Several colour-coded walks of varying lengths are on offer and the forest hosts parts of two long-distance trails – the Ring of Gullion Way and the Tain Trail, a 40km looped trek from Carlingford. The car park displays a notice mapping out the course followed through Ravensdale Forest by each of the long-distance trails as well as the trails within the forest. One of the short forest walks takes in an interesting stone circle, which, although it looks authentic, is thought to be a fake erected in the early 1800s by Lord Claremont.

To follow the Ring of Gullion trail through Ravensdale, you will be tackling Section 2 in reverse. It is worth taking a few minutes to study the map on display in the car park as the Ring of Gullion signage leaves a lot to be desired. The OS map is also unhelpful as it mistakenly merges parts of the Ring trail with the Tain Trail through Ravensdale Forest. However, don’t worry if at any stage you find yourself on the Tain Trail in error, as both trails end at the same point at the top of the forest.

Starting from the right-hand side (south) of the car park, follow a path alongside the gully and stream. Turn right at the top of a set of stone steps and carry on up through the trees with the gully on your right.

When you reach a clear area and a meeting of paths (Grid Ref IJ08339 15820), take the narrow, rough track up through the trees until reaching a wider, stony path. It’s all uphill, but fairly gradual and after only a couple of kilometres the forest peters out and reaches the road.

At the forest gate, turn left and enjoy a walk through the desolate, boggy moorland and scattered forestry as the mountain road gradually descends in the direction of Ferryhill Road.

The views soon open out with the distant Mournes to the east and the green and pleasant Armagh scenery to the north.

Making your way back after two or three kilometres, or as far as you wish to walk, Black Mountain makes an appearance as you return to the forest entrance. Also known as Clermont Carn, at 510m, it is the second highest peak, after Slieve Foye, in the Cooley Mountain range.

To return to the car park via the Ring trail, ignore the left-pointing Tain Trail sign; instead, carry straight on and descend into the trees. Keep left at the next junction, some 700m further, then after another 400m veer left onto a narrower track which descends steeply through the trees. Where the track bends right, look out for a narrow footpath heading off to the left. This muddy trail weaves between the tree trunks, bringing you to a splendid section, high above the gorge, and eventually back to the car park.

From the car park, turn left and drive until you meet a junction where a right turn takes you to a roundabout near the N1 motorway. Take the first left off the roundabout followed shortly by a right turn. Look out for a rough parking place on your right leading to a forest gate (Grid Ref J07758 14196). You are now at the southern entrance to Drumad Wood and, within its 10km of forest tracks, lie Feede Mountain and Feede (or Drumad) Souterrain. To reach the summit, take the forest track north for about 1k to a junction. Take the track that turns off sharply to the left (south) and continue upwards until about 150m from the end of the track.

Look out for a very faint path on the right and ascend westwards through rough vegetation of heather, gorse and brambles which soon gives way to more open ground. Follow the path to the high point of the hill a short distance further. There is a grand view of Slieve Gullion to the north-west, Croslieve and Slievebrack to the west and Dundalk Bay to the south.

To reach the souterrain, retrace your steps to the original path, turning left when you reach the path junction. Keep straight on for about 600m until you reach a junction with a path going off to the right. The souterrain lies a few metres away at the bottom of this path. Its entrance is well hidden (Grid Ref J07834 15546). It is surrounded by a wooden fence which needs to be scaled, but there is some padding to help you over.

The souterrain is a very well preserved example of its kind with a main passage of about 15 metres in length and a side chamber. With a bit of a squeeze, the structure can be entered – unless you suffer from claustrophobia. Souterrains date to around AD 600 to 1200 and are thought to have functioned either as refuges or storage facilities. It’s a slightly surreal experience to be in the presence of such antiquity while hearing the traffic thunder past on the adjacent NI motorway. 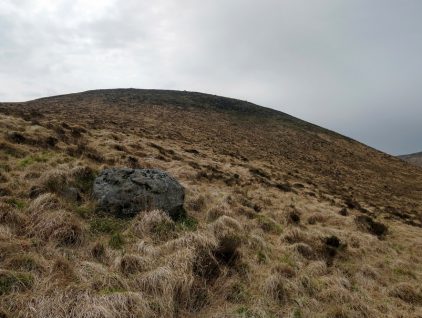 The final walk begins in Jonesborough. Join the motorway for a short cross-border hop to the town, exiting left and carrying on through the town. Park at the large car park adjacent to the Eurospar.

Walk across the road to nearby Kilnasaggart Road. After the first few houses, the road narrows to a single track as it makes a gentle descent downhill between high hedges. Slieve Gullion is visible between the gaps in the hedges as the road makes its way towards the main Belfast to Dublin railway line.

At the bottom of the road, a sign points to Kilnasaggart Inscribed Stone. A walk through a couple of fields takes you to the stone. It is about 2m high and is considered one of the oldest inscribed stones in Ireland, dating from the 8th century. It stands on the ancient road which ran from Tara in County Meath, through the Moyry Pass (the Gap of the North) to Dunseverick Head on the North Antrim Coast.

Returning to the road, turn left and walk under the railway bridge and up a short hill, turning left at a road junction. After a few metres, Moyry Castle is signposted to the right. Built by Lord Mountjoy in 1601 to secure the ancient route between the provinces of Ulster and Leinster, the castle occupies a strategic position on a hillock overlooking the Moyry Pass.

Return to Jonesborough by retracing your steps, hopefully resolved to further explore this fascinating area in the future.

Although the Ring of Gullion Way is circular, each of its six sections is linear. It is quite possible to complete Section 2, but unless two cars are used, it would involve a return by the same route; however, at about 21km, it is manageable and well worth the effort. It is not advisable to attempt Section 3, Marble Bridge to Forkhill, in its entirety as there are currently routing and safety issues affecting the segment between the forest and the road, roughly two-thirds into the walk. Details of the complete Ring of Gullion Way walk here.

The track to the summit of Feede Mountain can become very overgrown and a winter visit, when much of the vegetation has died down, is much easier on the legs and gentler on the disposition.