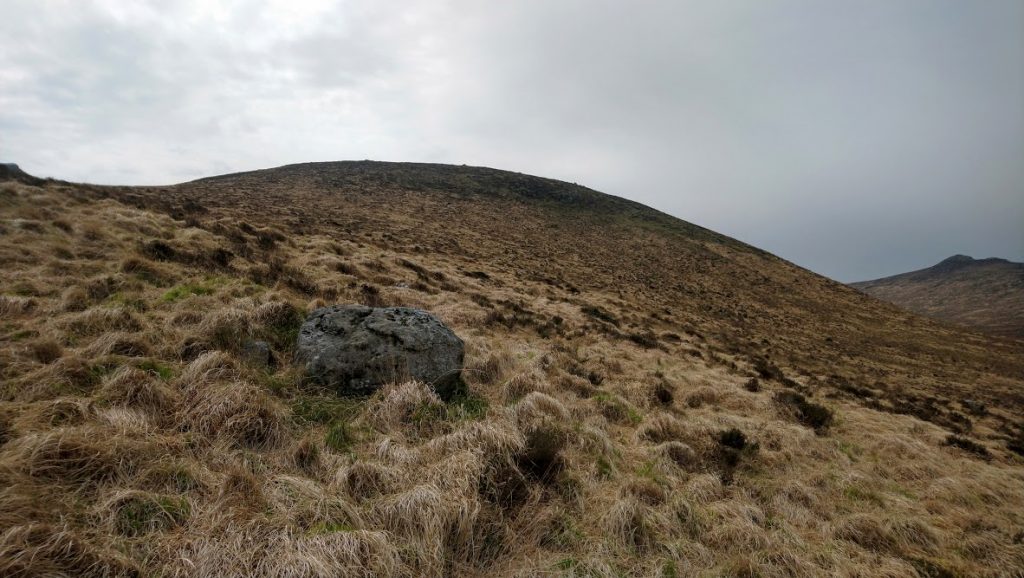 This is a little mountain, hill really, tucked away in the western Mournes. I decided to climb it during the Easter holidays in 2019, just to tick it off as its name appeared on the map, but it turned out to be a surprisingly enjoyable walk.

You could describe it as a shoulder of Slievemoughanmore but it has a summit in its own right and is in the centre of higher hills which makes the view from the top interesting.

I had climbed Slievemoughanmore from the direction of Pigeon Rock Mountain before and had planned to move on to Wee Slievemoughan as part of that trek but it was winter and it turned out to be a hard slog in the snow, so I turned back. 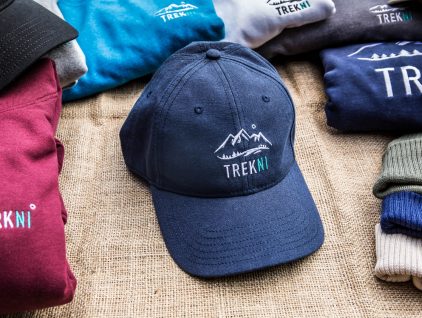 This time it was a fine spring day when I parked at Leitrim Lodge and made my way over Shanky’s River and followed the path upwards into the hills. The path turns to the right when you gain a bit of height and leads towards Pierce’s Castle. Instead of going that way, I followed the Ulster Way between Rocky Mountain and Tornamrock. There is a sign post showing the direction here as the path itself is not that clear. Look for the little hut in the picture and stay to the left.

Stay between the two hills until the path starts to descend again. From here you can see down into the valley where the Rocky Water is crossed by a wooden bridge. This is a good place for a drink or a little breather as from there you start to climb again.

There is no obvious path so I just looked to the ridge and made my way upwards. The grass was long and still parched brown from the hot summer of 2018. This was the hardest part of the climb but, as the Mournes go, not too bad. 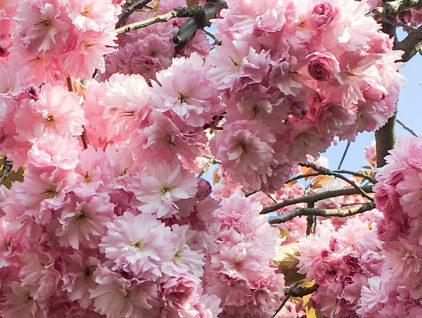 Soon I was at the rocky little plateau and was surprised at how the landscape suddenly opened out when I reached the top. In front of me was the steep incline up Slievemoughanmore with Eagle Mountain appearing behind it. Sweeping round were the lower slopes of Pierce’s Castle, Tornamrock and Rocky Mountain. Further away were Hen and Cock Mountains, looking very grand in the sunshine, and in the distance, to the right of them, were the higher summits of the eastern Mournes with the crags of Bearnagh very dark under clouds in that direction. Pigeon Rock was next, leading back round to Slievemoughanmore. I hadn’t expected the view to be so good from such a small mountain; it was maybe more impressive because of the way it is surrounded by the higher ones.

I made my way back by the same route, taking my time, and arrived back at the car after three hours. It was roughly a 4 mile walk with a total ascent of 1,468 ft.

This is a gentle afternoon out if you are an experienced climber in the Mournes and probably a good one to start with if you haven’t been hiking for a while. The trickiest part is the climb up after the bridge but it is not really that difficult. It is away from the more popular routes and it’s worth having a go at if, like me, you like to look at the names on your map and feel good about having climbed them.