The power of social media and hiking: An invitation hike that spiralled 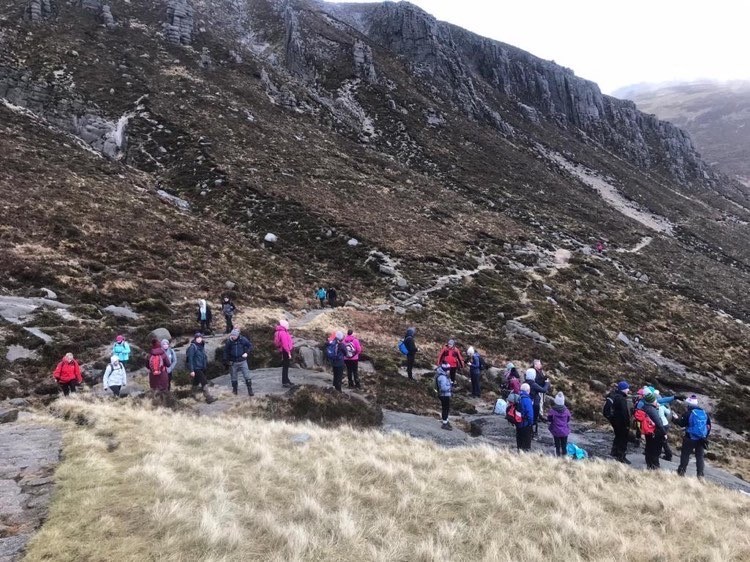 Invitational hikes are commonplace amongst hiking groups. I’d imagine years ago word of mouth sufficed to allow a few people who knew someone who hikes in a group to hear of an upcoming gathering to venture on a jolly up the hills. Flask of tea in hand and some jam sandwiches, then home at a reasonable hour.

Today, with Facebook, Instagram and such, the younger and slightly older generation can connect to people who they would have never come across. A couple of idiosyncratic sentences announcing your proposed date, a tasteful photo of your most photogenic members walking along with all their gear on, and you’ve caught the eye of the ‘on the fence’ potential hiker at home, mid to late December, full of self-promises of a new them for the coming year.

This is exactly what we did, although we already have a pretty big following due to our off the cuff remarks about other hikers and posts which include general banter and highly suspect mountain-related shenanigans. Check out our social media for reference. We like to think there are loads of people who really want to experience the Mournes, who are like us and like the craic and who are slightly unhinged while possessing the darkest of humour. 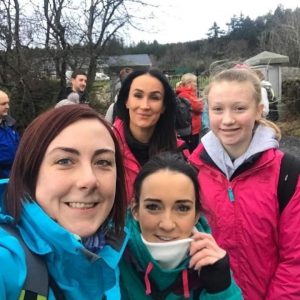 Those accolades certainly have a draw. People are forever messaging us asking about the craic, the hikes and how they become a Hallion. Their biggest hang-up is that we are some sort of super-fit, CrossFit, Olympians and ex-military types. I added all that in there because we actually do have all those in our group, but the vast majority of us are normal everyday people with various backgrounds, jobs and hobbies. Nothing special at all. Just fun-loving people.

So, back to the hike. We held our quarterly invitational hike on Sunday 26th January. Meeting time, 0830. Place, Carrick Little Car Park – our members just love the scones in the café.

I travelled with my cousin from Portadown and we arrived at the carpark to an absolute crowd of people, all looking apprehensive and dubious, as any newcomer to a group would be. Truth is our own members were vastly outnumbered, about 2 to 1. Going by our messages on social media, I was expecting about 8 newcomers for the hike plus about 15 to 20 of our own members. In all, the total number was 52, including 15 members. 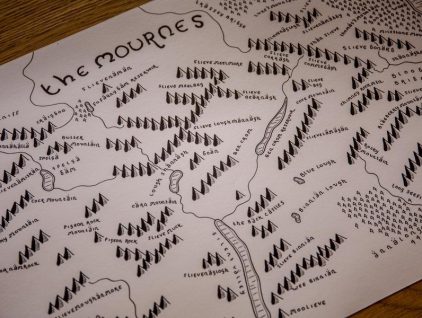 This was a big undertaking. Our biggest hike to date was 31 people which we took across Moolieve and the Binnians. Thankfully our new route we choose previously included mostly paths and valleys with a few boggy bits thrown in. Got to make it interesting you see.

Our route was: Round Seefin, Long Seefin, past Rocky Mountain, Brandy Pad, dropped down Annalong Valley than to the café for those famous scones. We trotted down the road then up Round Seefin. There were plenty of reports of people struggling due to rusty or virgin legs along with grunts of ‘why did I agree to this’. It was short-lived. Once our members got talking and trying to motivate them, they were well up the first hill and moving at a pace they felt comfortable.

Some of the newcomers, as always surprise you and themselves and draw a boost of energy, power on in front and soon realise, when they are bent over holding onto their knees and blowing out mucus, ‘maybe I’ve underestimated this’. Everything is a learning curve. One young lad left his water in the car, much to the dismay of his uncle, who thankfully had enough for both of them. 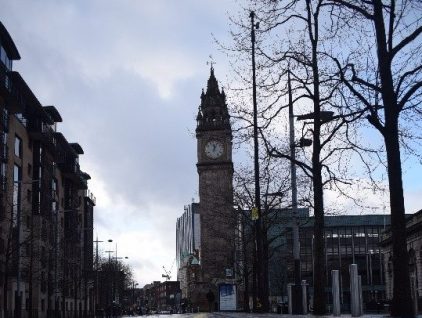 READ: A Photographer’s Guide to Belfast.

The biggest, most off the cuff moment became apparent almost right away. Our group love to call out people wearing denim, ‘jeans w*****’ is the proper term, I probably mention it in every article I’ve written and it features heavily on our social media. Sure, didn’t someone wire in wearing a pair of skin-tight black jeans. Was obviously called a jeans w***** several times, but to be fair was unrepentant and more or less was proud to be wearing this fashion faux pas in the manor. I somehow have a bit of respect for him for that, well done that man.

The group was starting to separate vastly due to the variation of fitness level, but for the first half, we tried to keep it together and as tight as we could. This was consistent right until we stopped for a quick lunch beside the saddle at the Bog of Donard. Off we went again over the brandy pad. I was floating up and down the ranks, so much so, I was stripped down to a tee-shirt. 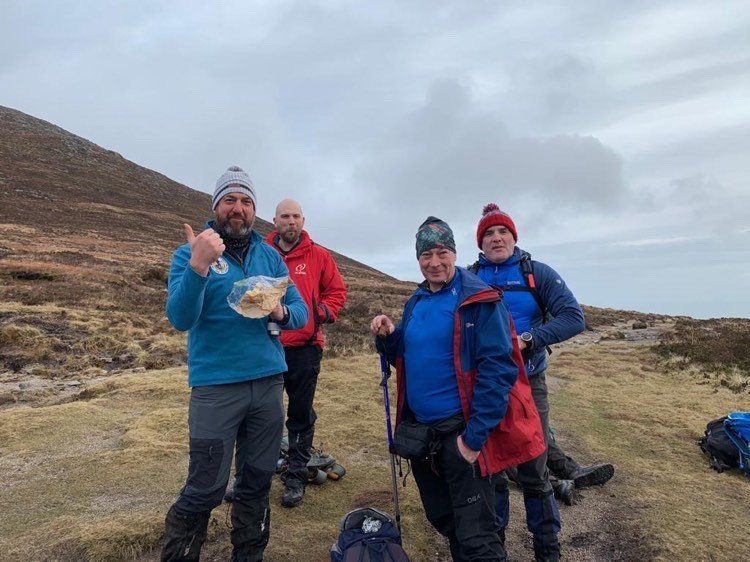 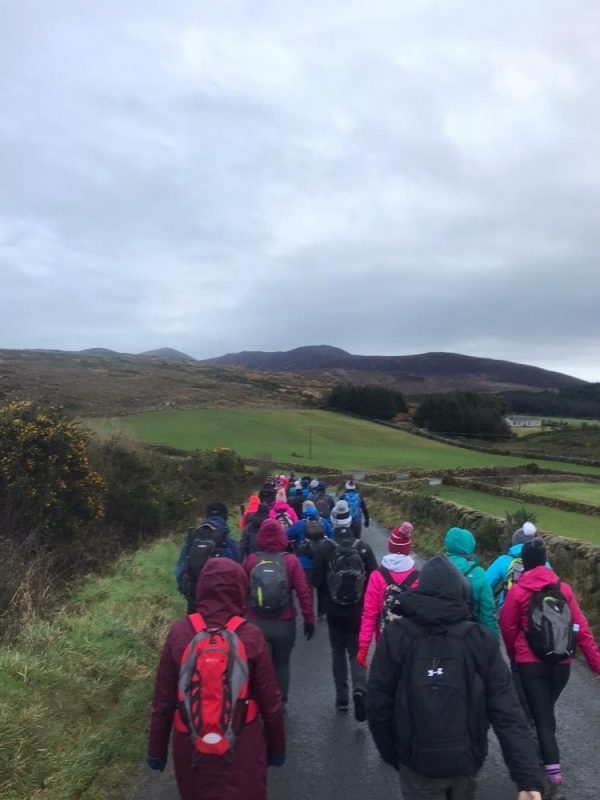 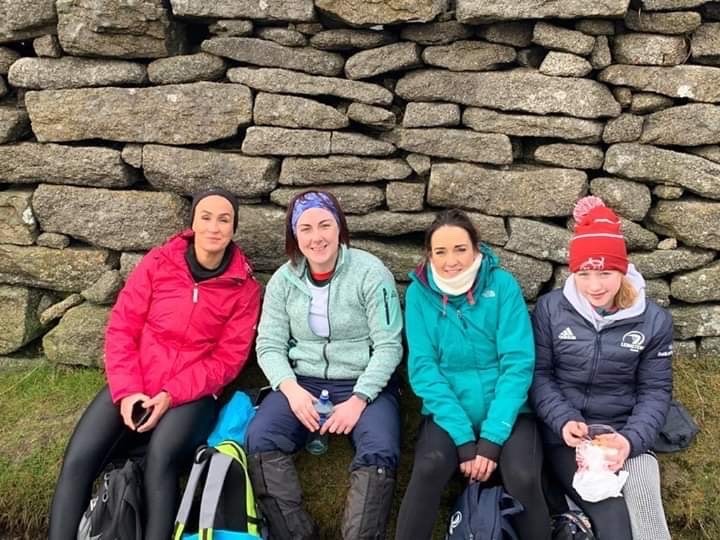 Sooner or later though, the gaps became wider with groups of people finding their own pace. I made my way to near the front and looked behind to survey the string of people marching along the brandy pad, like heading towards the frontline of some sexy war. Everyone was in good form, a few people sliding and falling in the slippery grass were met with a massive cheer. It became a bit of a thing, don’t fall or you’ll be showed up.

The only bad weather we experienced was a short-lived spell of hailstones, nobody was bothered at all, the newcomers were more mesmerised about the famous Devils Coachroad and how they may be press-ganged into climbing it with us someday in order to earn their MUM bandana.

With the gaps wider and the groups tighter, we finished at various times, most of the regulars making a beeline for some much longed-for coffee and scones. Today, Monday, we have been bombarded with messages from the newcomers telling us about their great experience and how they are looking forward to joining us again. We welcome them all, even the ballsey jeans w*****!