A record-breaking ascent of Slieve Donard 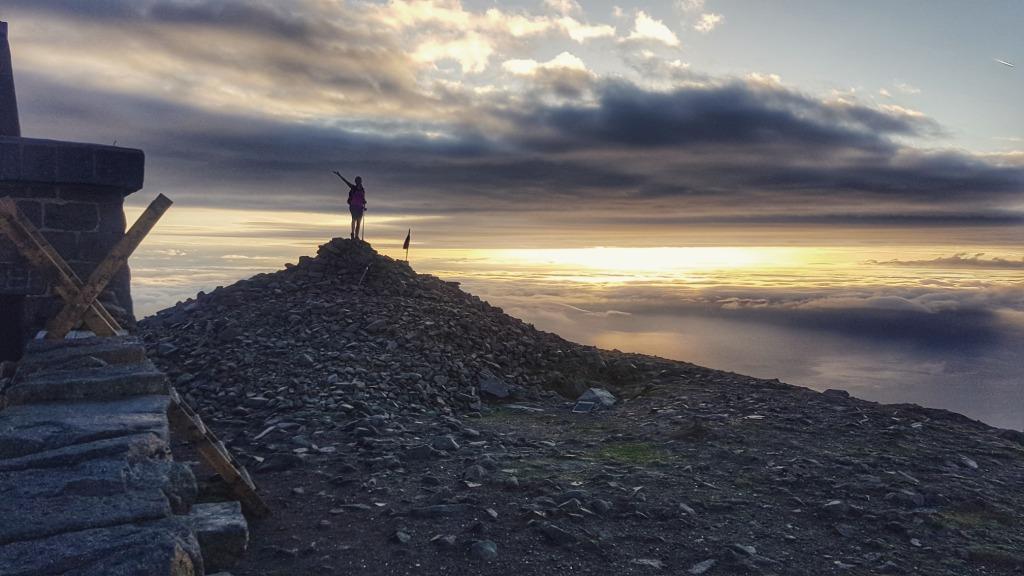 I have been visiting the Mourne Mountains in County Down for many years now, climbing many of its classic rock climbs and standing on all of its major summits. Out of all these great days out in all weathers and different climbing partners, my two favourite days out in County Down involve the same walk and partner on two very different days.

READ: A Tale of Two Strangers by Mark Jameson (Part 2) 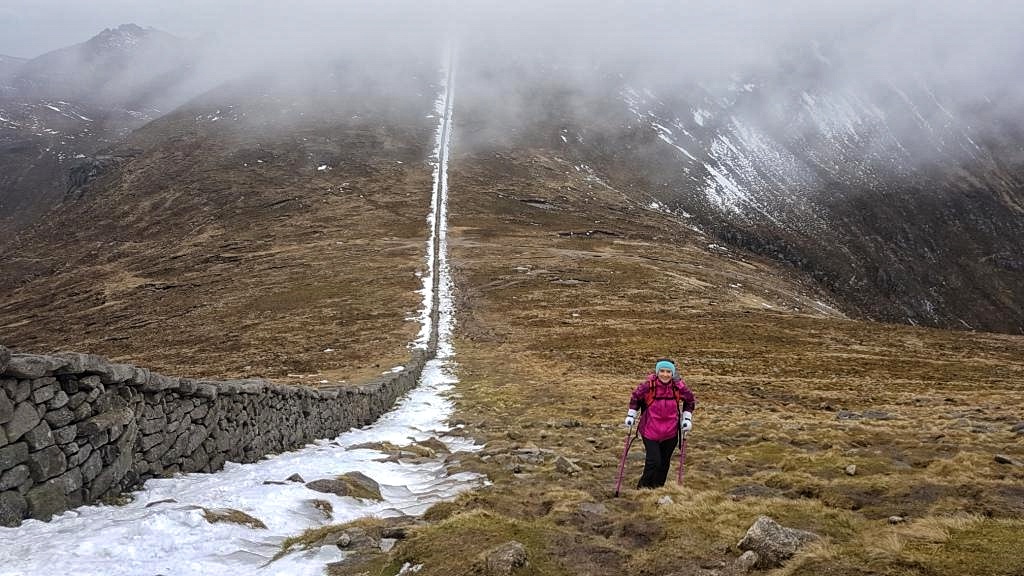 At 850 metres high the summit of Slieve Donard is not only the highest point of the Mourne Mountains but of the entire province of Ulster. My walking partner on both these days out was Nikki Bradley. Our chosen route was the very popular Glen River route starting at the Donard carpark in Newcastle town. This route takes the excellent pathed network through the Donard Forest and continues up through the open views of Glen River to a steepening and the Mournes Wall. From here you follow the wall up the western slopes to the rounded summit of Slieve Donard. 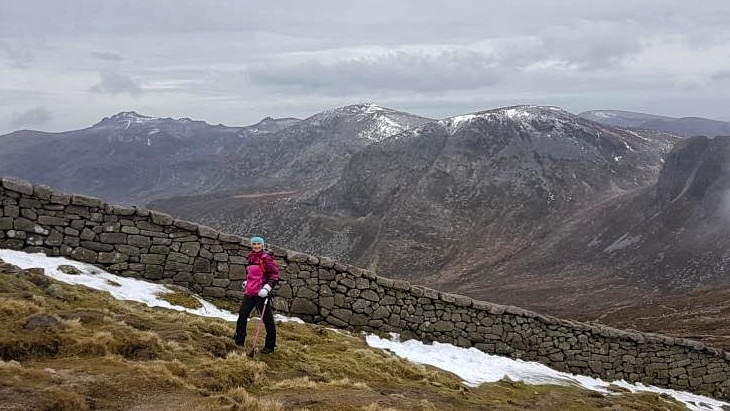 Both these walks were part of a very cunning plan Nikki had to climb Carrauntoohil, Croagh Patrick, Slieve Donard and Errigal in 24 hours. Diagnosed with a rare form of bone cancer at 16, Nikki Bradley is one of fewer than 10 people in the world to survive her form of Ewing’s Sarcoma. But treatment has left Nikki with severe problems with her legs meaning that she now permanently uses crutches. As a crutch user Nikki must be very cautious of which type of terrain she walks on. With many under foot conditions causing little or minimal problems but alas other are near impossible to walk on with even adapted crutches. We decided it best to err on the side of caution and individually climb all the peaks prior to a complete round of four in one continuous walk. 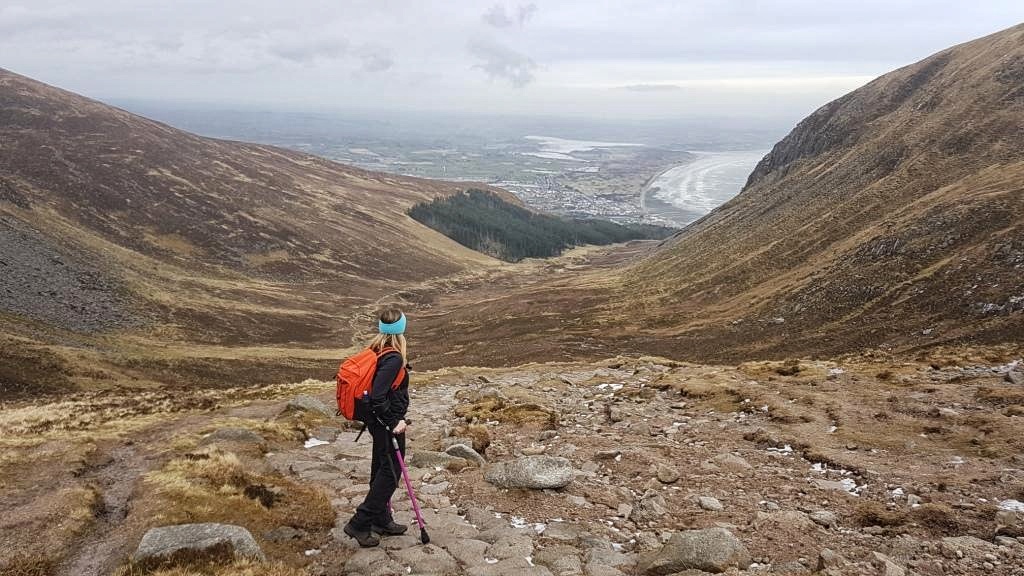 The first time we climbed Slieve Donard was on the 16th of February 2018. It was Nikki’s first recce of the mountain and our chosen route to the summit. We left Donegal on a glorious blue sky and bright sunshine morning and travelled east to Newcastle. The further east we travelled the greyer, more overcast and gloomier the sky became. The Mournes forecast for the day was good, overcast and dry with the freezing point hovering around the 600-metre contour. 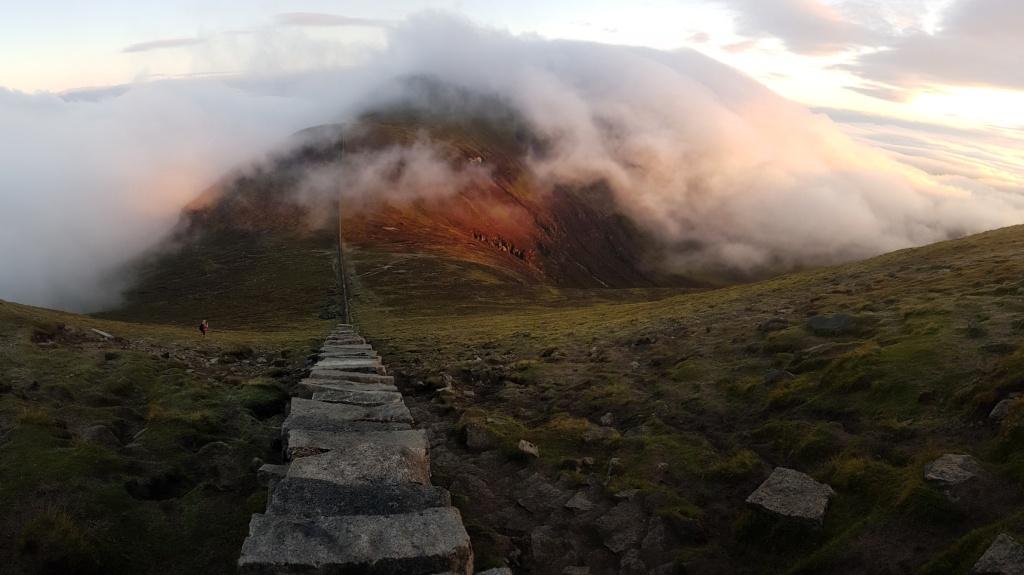 We arrived at the Donard carpark in Newcastle late morning and immediately made our way over the smooth granite slabs and paths through Donard Forest. We continued on the excellent trail through Glen River to the steepening at about the 500-metre contour below the head of the glen. It was here that a minor stream and natural seepage had converged on the path. This slowly moving water course had created a thick frozen solid cascade of white and blue ice for approximately 30 metres on the steepest section of the path. This provided an excellent test of Nikki’s adapted crutch ice spikes and rubber stretch feet crampons. 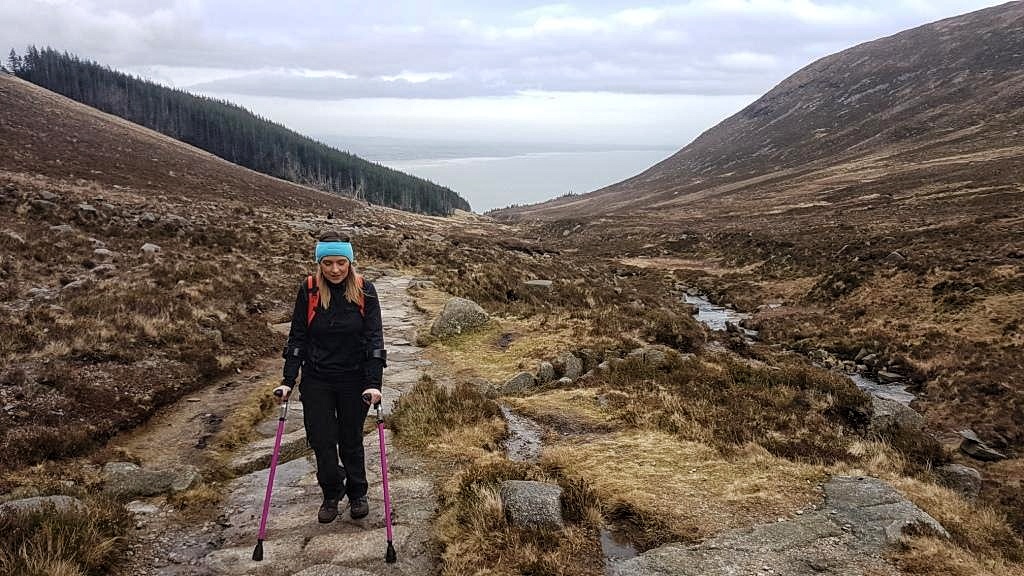 This little foray into the frozen world absorbed a lot of time but took us nicely to the Mournes wall by mid afternoon. Now that we were out of the relative shelter of Glen River a very cold south east wind was scouring the upper slopes of Donard and depositing all the remaining snow along the lea of the Mournes Walls. This was off course, a further test of Nikki’s snow and ice gear. Alas our time was running short and we decided to descend before reaching the summit. This allowed us to descend the steepest of the ice covered path before it got dark. It was a very successful recce walk as we returned through the path matrix of Donard Woods to our car through the light of our head torches.

Our second day on this route was on the 22nd July 2018 and we arrived in Newcastle at approximately 3 30 am, having already climbed Carrauntool and Croagh Patrick the same day. Nikki and I ascended the black dark forest trails once more, our only light was from our head torches. Once we were through the trees there was a vague glimmer from the rising sun over Scotland. The air got warmer and drier as we ascended up towards through the now familiar glen and upper western slopes of Donard. On the summit of Donard we were rewarded with an outstanding cloud inversion. For a very brief time, the summit of Slieve Donard was the only thing visible above the shimmering clouds below. Quite simply an outstanding summit view. 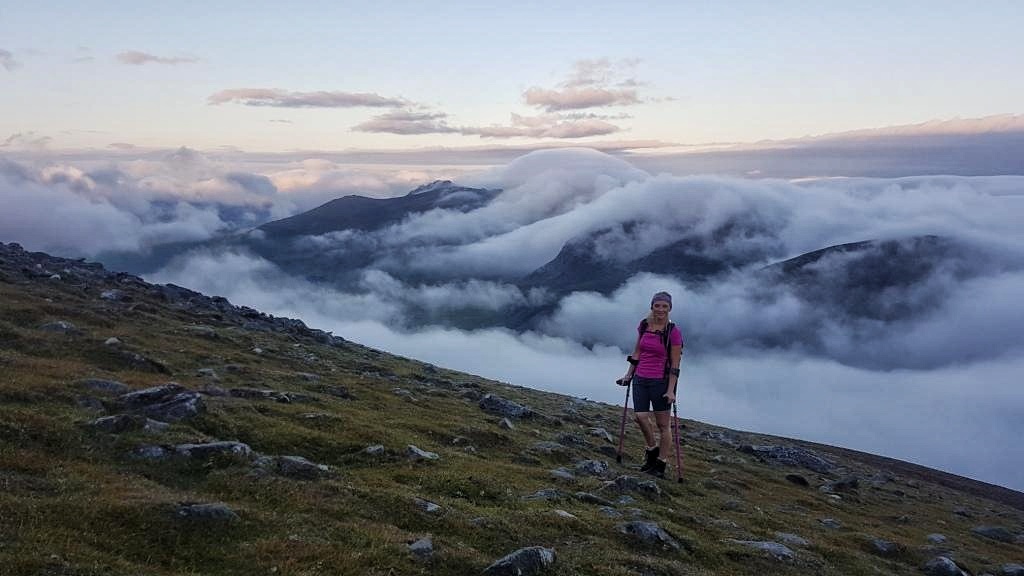