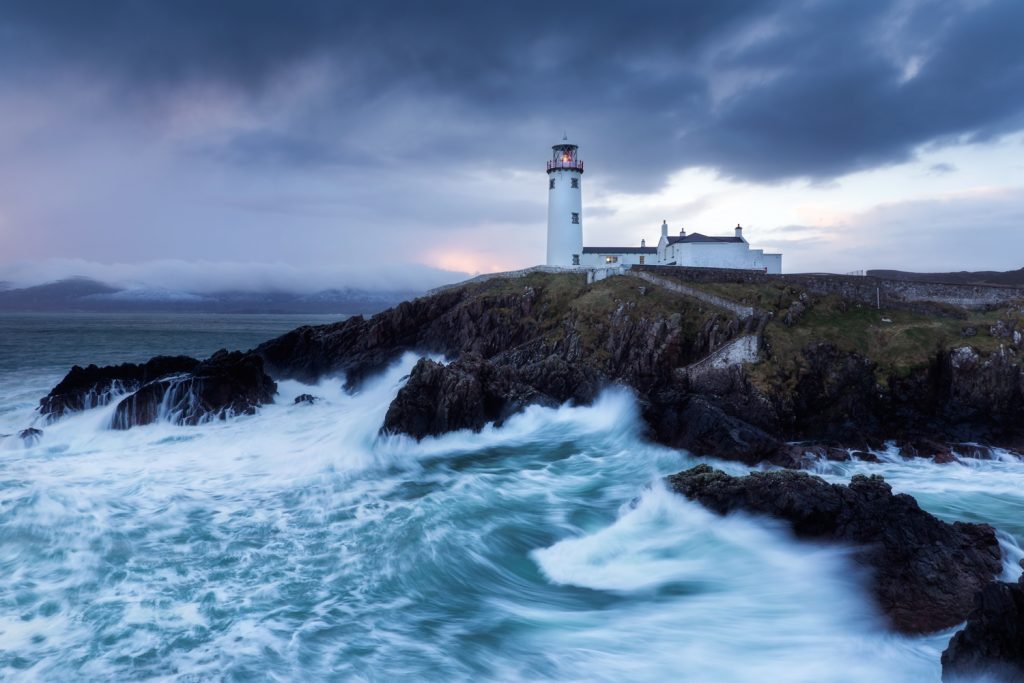 Each month, we showcase a Northern Ireland-based landscape photographer and go behind the scenes to find out what makes their photography click. So let’s hear from Stephen Wallace of Hibernia Landscapes… 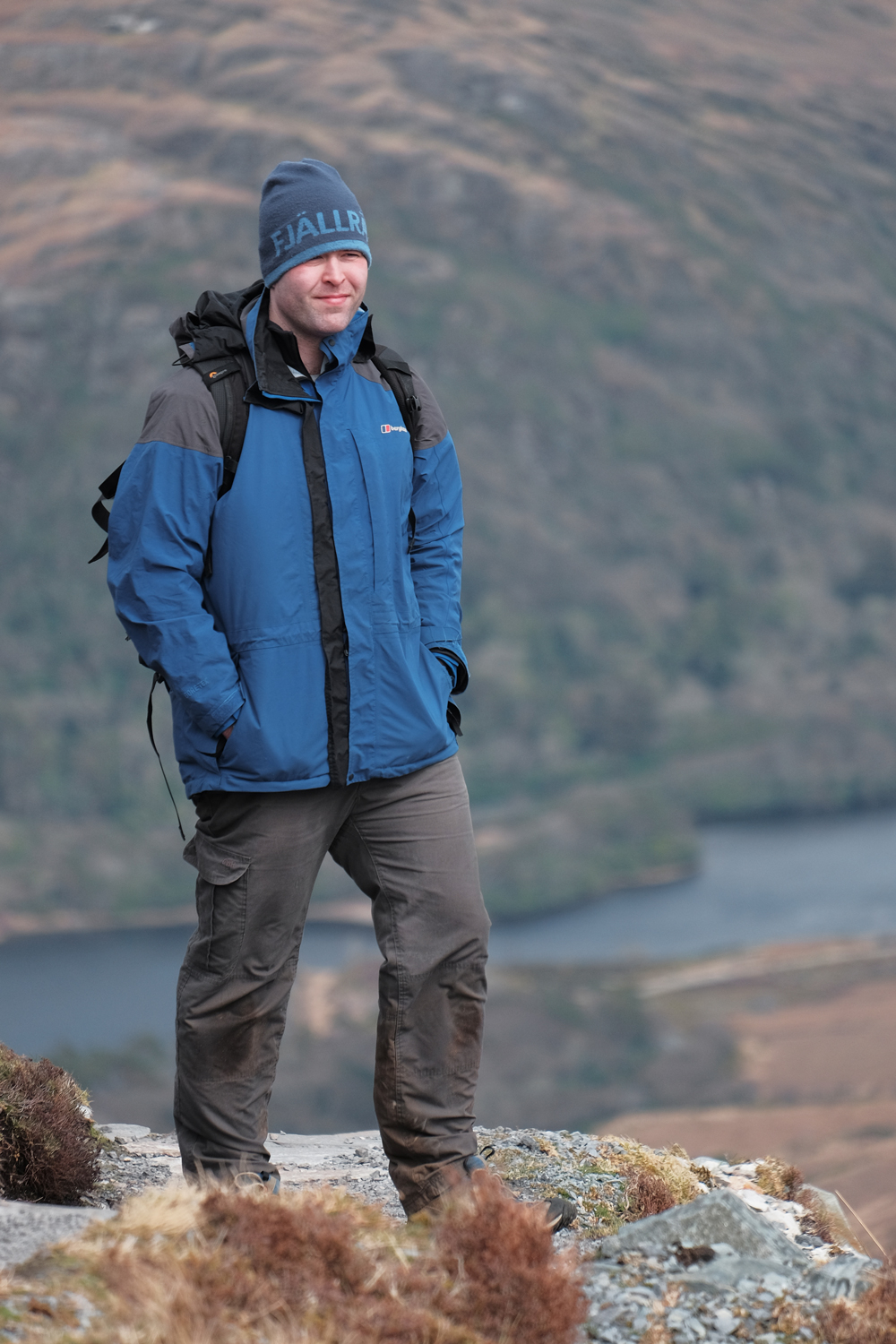 1. Stephen, tell me a bit about yourself.

I live in Lisburn, I’m 33, husband to Julie and dad to Erin. After school I studied Law but then moved into accountancy. My main hobbies are football (watching Liverpool and playing 7-a-side), hiking (now subsumed by photography), cycling (less-so these days) and eating (more-so these days).

I moved around a lot when I was growing up due to my dad’s job. I was born in Ballymoney in north Antrim, but soon after moved to Limavady, followed by a short stint in rural Tyrone then Lisbellaw in Fermanagh. However, I moved to the countryside just outside Lisburn just before I turned 6 and have lived in that area since. 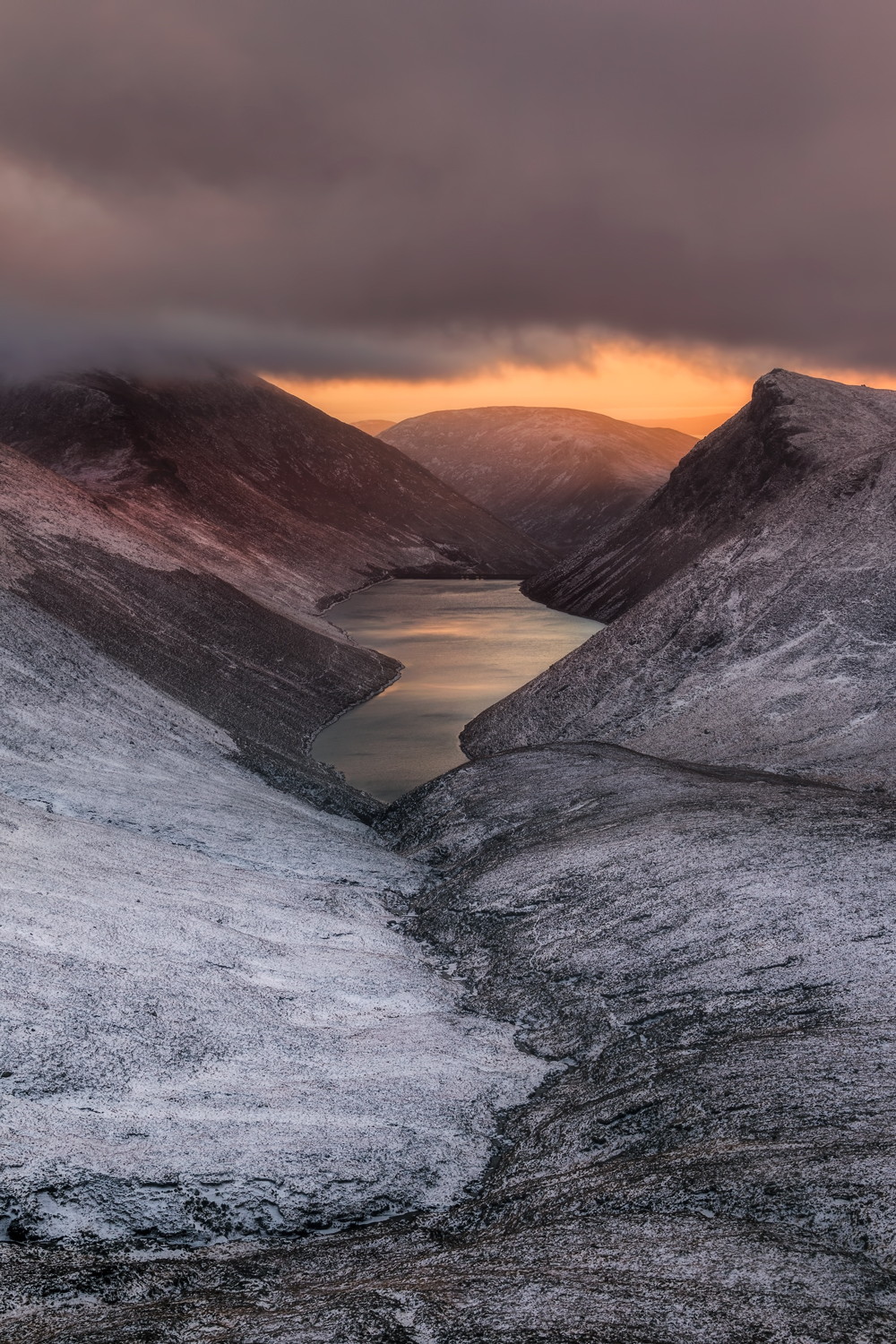 2. How did you get into photography?

I have always been a big fan of the outdoors and was always hiking in the Mournes and cycling around the country. I saw some amazing sights doing both of those hobbies and thought it would be good to get into photography to capture some of what I was seeing some day. One winter, I was just recovering from a football injury and asked my dad if I could borrow his DSLR to try and take some photos of the snow up Divis mountain in Belfast. I really enjoyed trying to capture the wintry scene and working with different compositions.

Shortly after, I bought my own compact camera (a Panasonic Lumix) and started a ’52 weeks’ project, trying to get one photo I was happy with each week. I got obsessed with it pretty quickly and bought my first DSLR 6 months later and the obsession is still there! 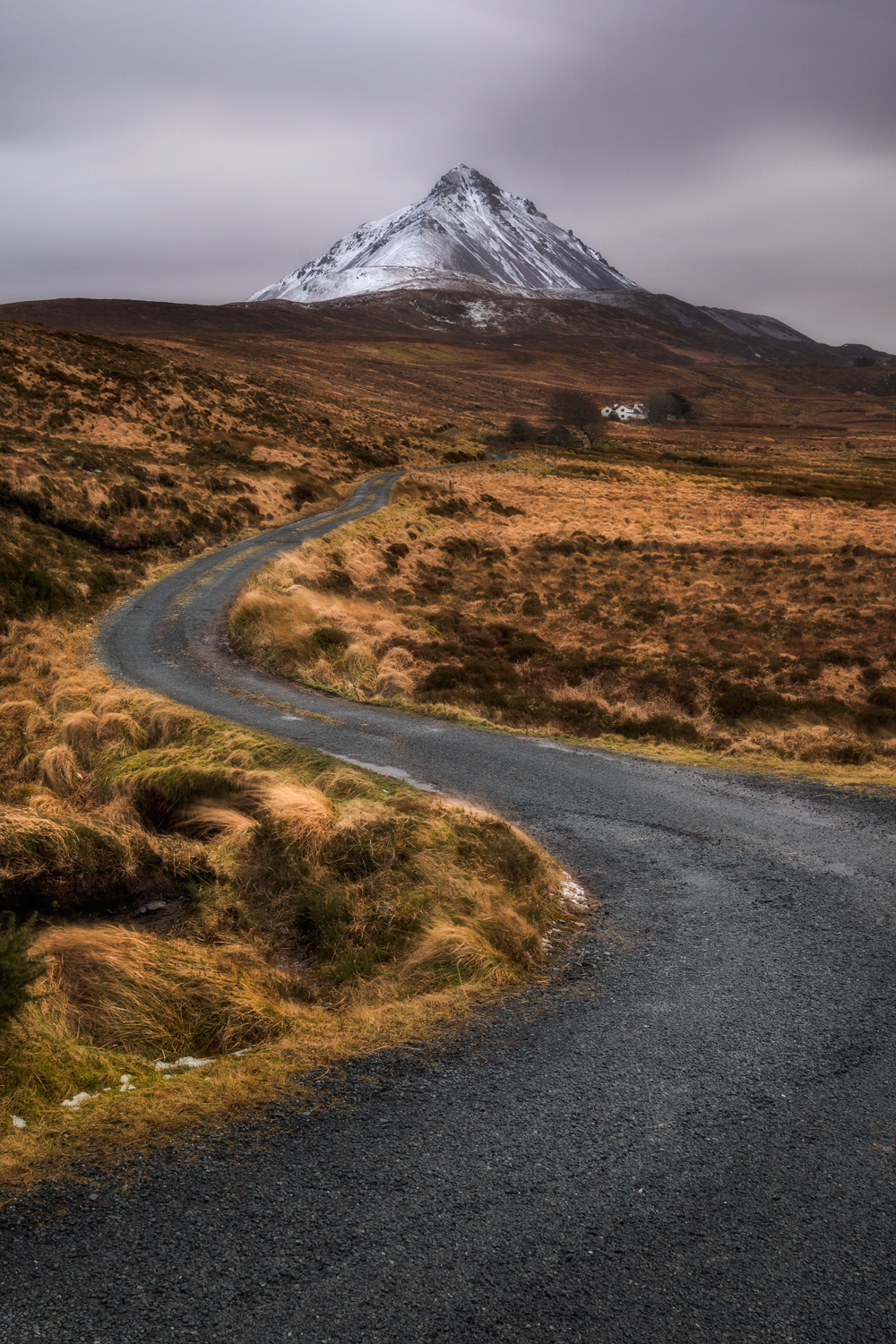 No, I work as a chartered accountant, providing financial & commercial advice to government on infrastructure projects and other government contracts. So getting out in the outdoors at the weekends is a great contrast.

I like both seascapes and mountains – I tend to find that my style involves getting very low to the foreground. I love the depth a detailed and interesting foreground can create, so I’ve found myself getting my camera and tripod really low to the ground and picking out the details in what is beneath my feet, like patterns in the sand or rocks. Also, I find myself shooting in portrait orientation much more often – I seem to find composing in that way a bit easier – it’s actually annoying me a little that I struggle to compose in landscape! I’m also a fan of photographing old pubs but I haven’t done much of that recently. 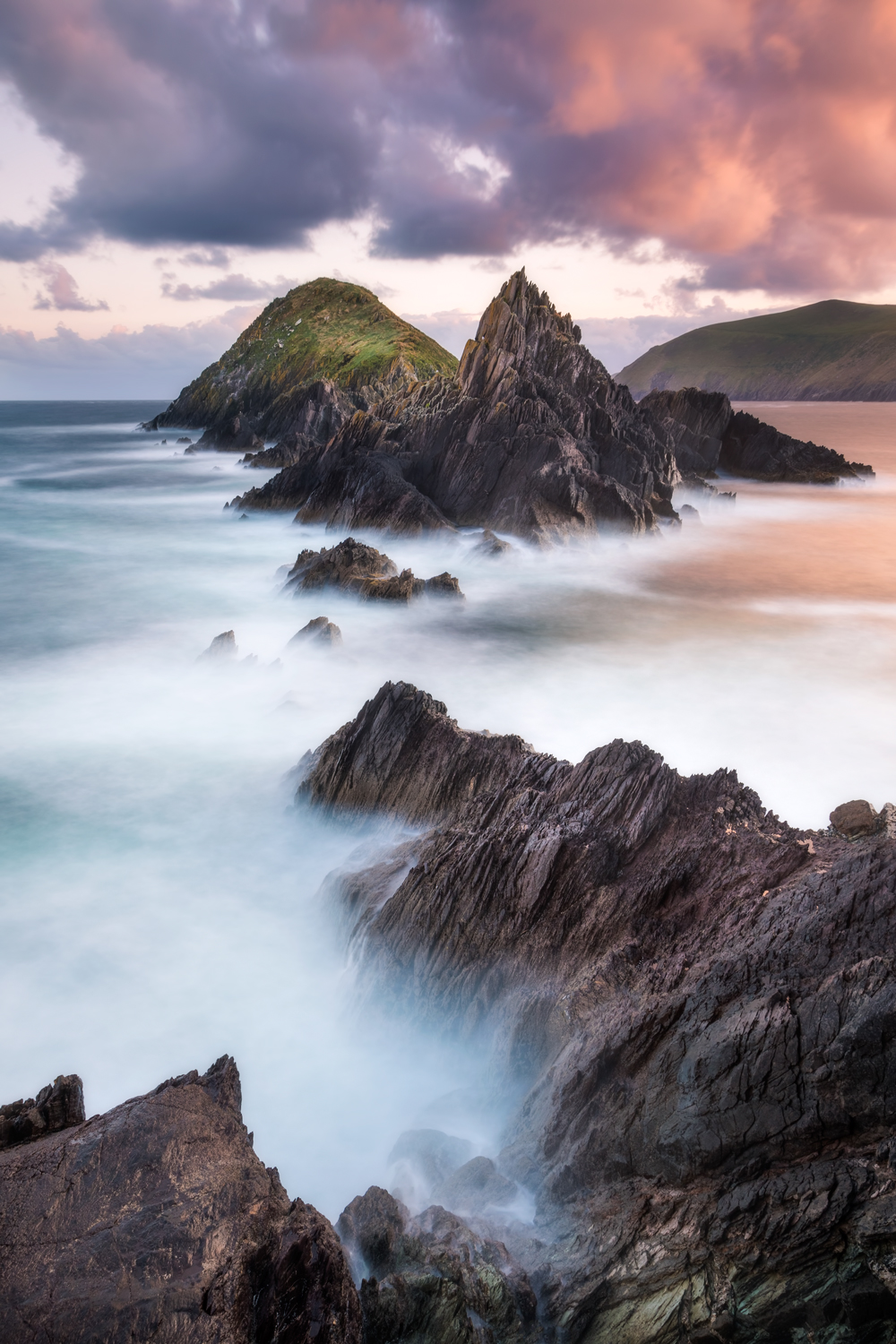 5. Would you say you have any influences?

Initially when I was starting out my photographic influences were all local photographers, particularly Stephen Emerson who is an amazing landscape photographer.  A lot of the people I looked up to when I started out I now count as good friends which is really nice.  I guess my influences now are from further afield.  I like to try and soak in the styles of photographers around the world and then see ‘can I apply that kind of style of image to any of our local landscapes?’ Sometimes it’s possible and sometimes it’s not, but it’s a good way of trying to think of original shots, which is an increasingly hard thing to do!  The Irish landscape photography scene is absolutely thriving at the moment – it used to be quite an unusual hobby – the standard has skyrocketed. 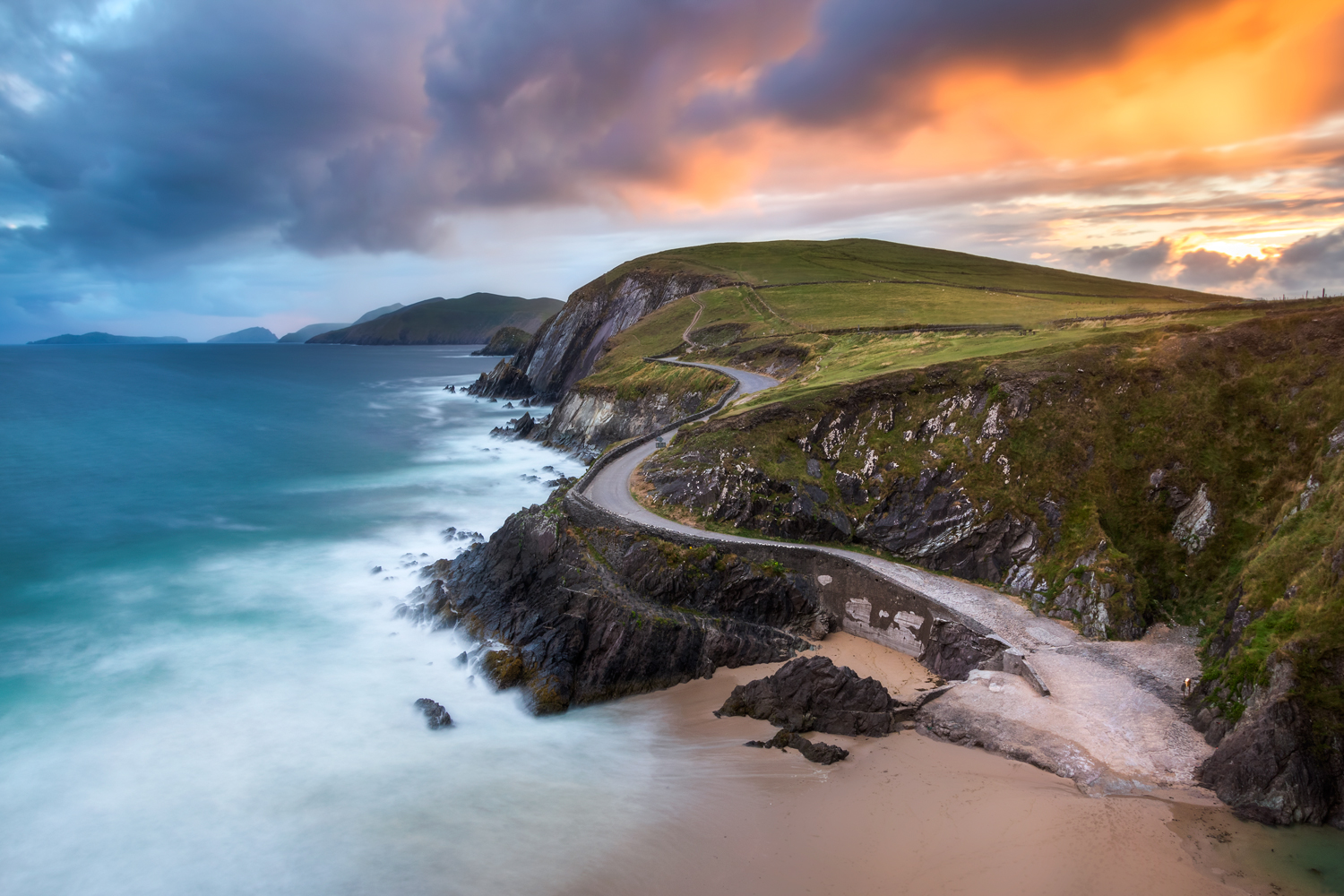 6. What was your first camera, and what do you use now?

My first camera was a Panasonic Lumix compact camera. I now have a Canon 7D Mark II. I’d love to go full-frame but when it comes to the crunch – the money involved (particularly in upgrading the lenses) always seems better spent on a photography trip to get new photos of new locations rather than on new gear.

I have a few filters – but I don’t use filters often.  I have 10-stop and 6-stop ND filters to allow long exposures and I have a polarising filter which I usually take out for waterfall-type shots.  In terms of lenses I have 3, a (Canon) 10-22mm wide angle lens, a (Canon) 18-135mm kit lens which is quite versatile and a (Tamron) 70-300mm zoom lens.  With landscape photography I find you’re usually shooting at one of the extremes; either ultra-wide or zoomed right in.  It’s what makes a scene look radically different from the human eye. 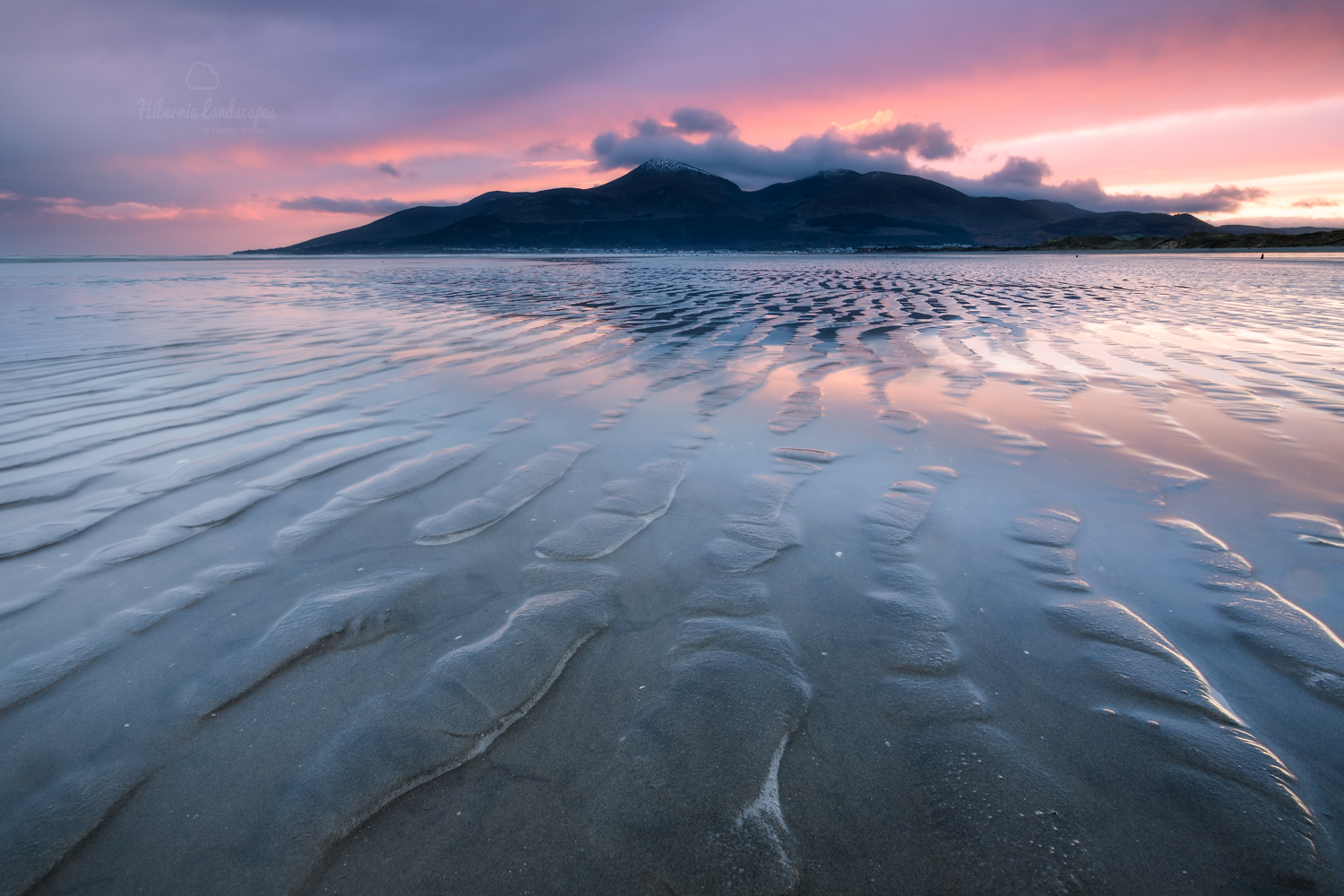 7. What software would you recommend for editing?

I use Adobe Camera Raw to do most of my editing to convert the ‘digital negative’ of the RAW file – which involves simple edits such as increasing contrast, lowering highlights, raising shadows and increasing vibrance.  I’ll use Photoshop for reducing noise and increasing sharpness etc – things like that.  I’d say it usually takes about 10-15 minutes to process a photo.  It’s one of my favourite things to do – to sit with a nice beer, put the music on and process a photo.

8. What are you working on at the minute?

I find myself making a lot more visits to the West Coast of Ireland and any excuse I have to visit anywhere from Kerry up to Donegal I’ll go. I’ve considerably increased the number of workshops I’ve led this year across the Mournes, Donegal and Rathlin Island and I’m really enjoying those. With Christmas coming up I’ll be doing a few Christmas markets and I’ve released my 2019 calendar. 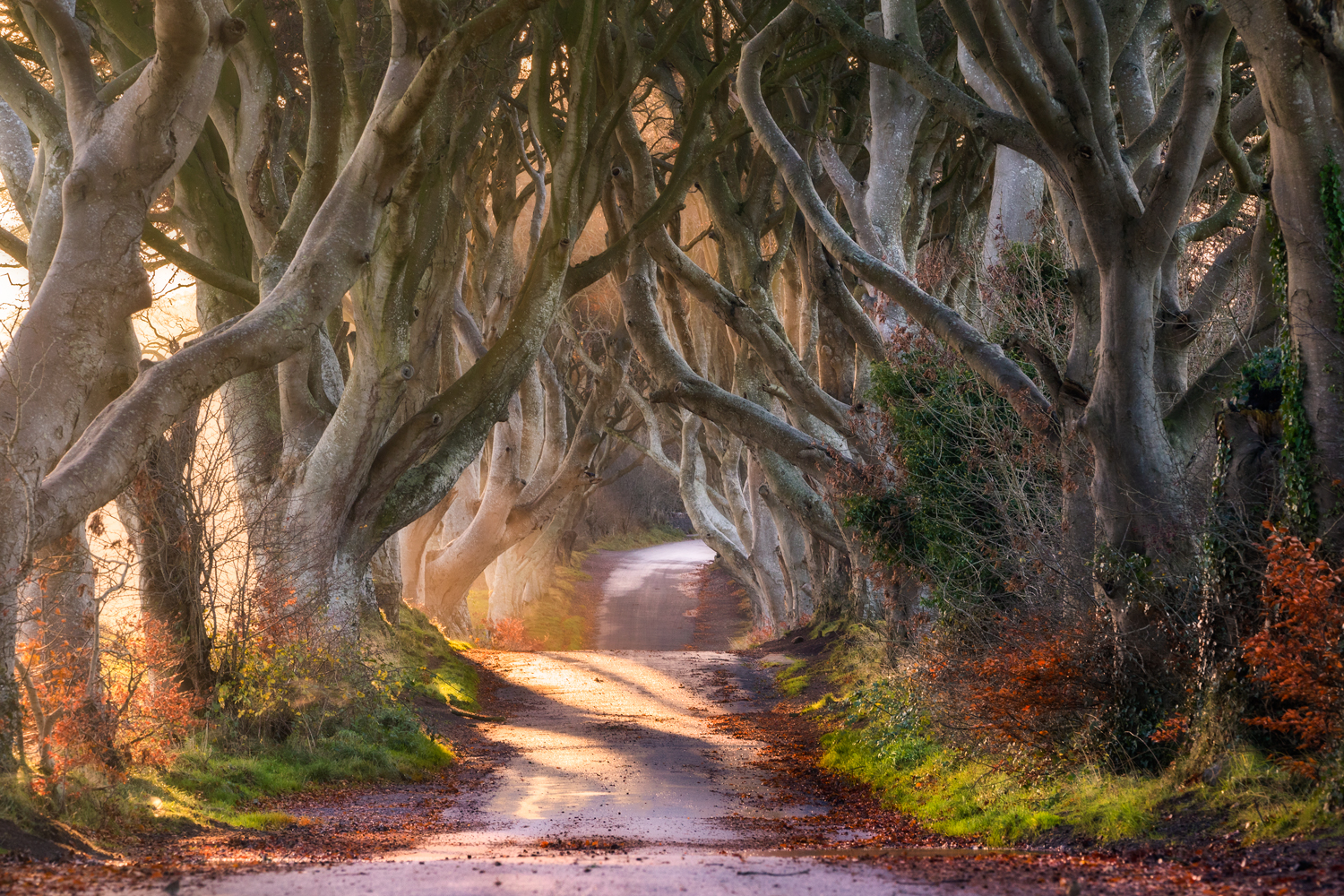 Nothing in particular – I went to the Faroe Islands in 2017 and would love another foreign adventure with the camera in 2019. I’ve no doubt I’ll be travelling to the west coast of Ireland plenty too. 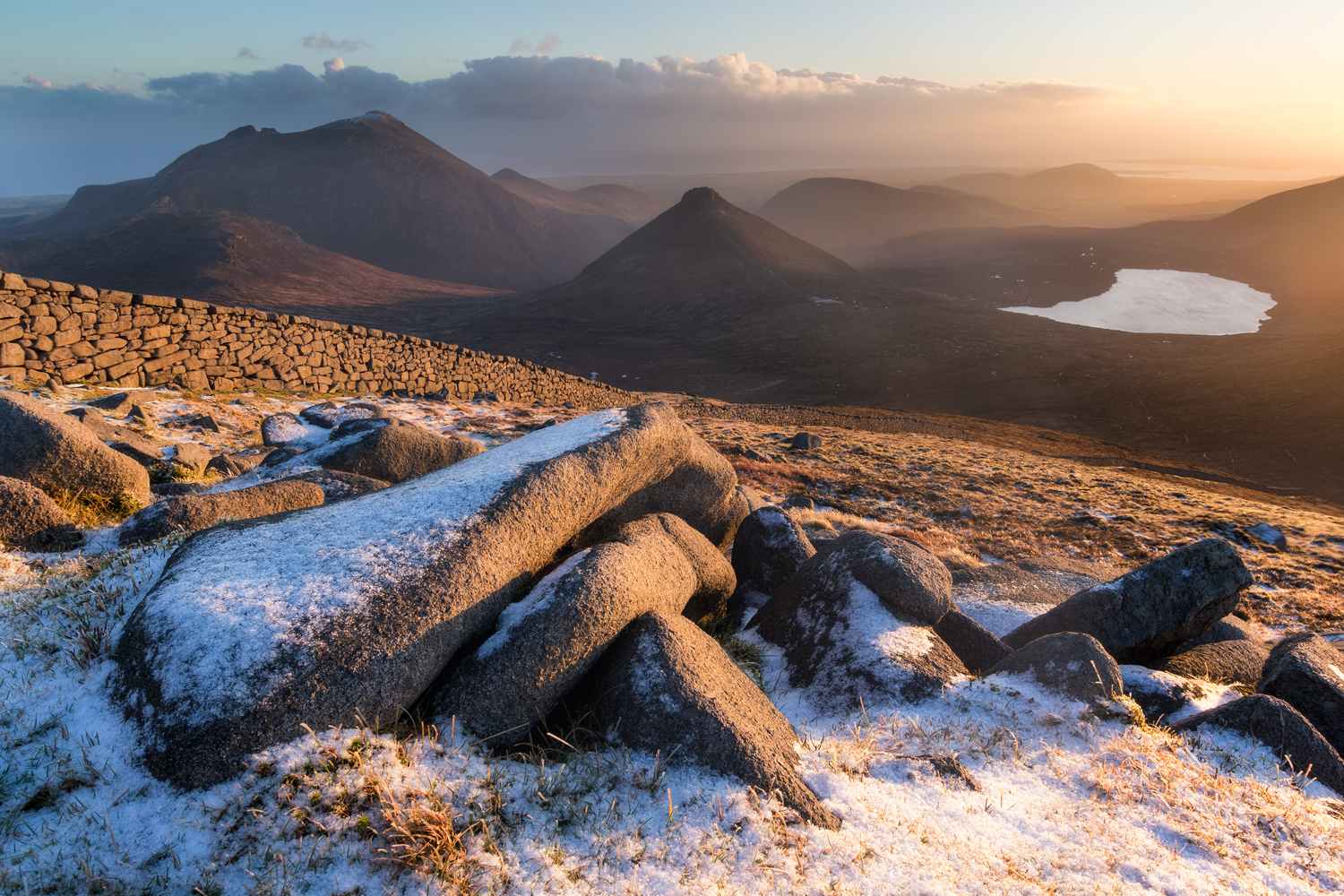 10. What do you enjoy most about photographing in the mountains?

First of all I just enjoy the hike. That was my original love and I don’t get up the mountains as much as I used to be able to – so I enjoy being there, getting the exercise and being out in the wilderness.

From a photography point of view – I like the way there are endless different compositional choices available, unlike many locations, where there are maybe only 3 or 4 decent compositions. That can make it challenging but ultimately very rewarding as most new shots are fairly original and hard to replicate. I find myself using a zoom-lens more often in the mountains than anywhere else – so there’s a great variety to shooting in the mountains. 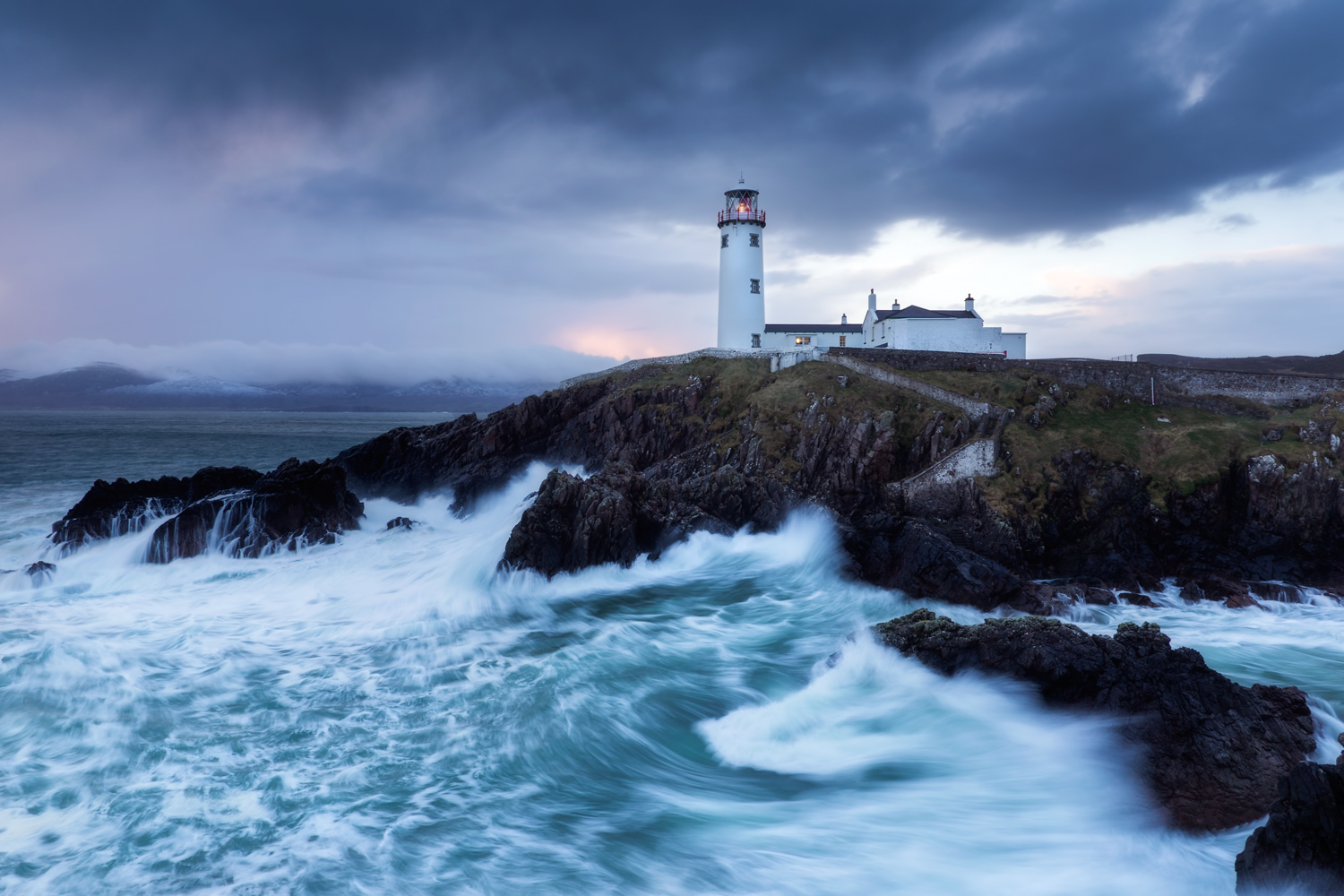 11. Finally, give us your “golden rule” for photographing the great outdoors…

Be a ‘pain in the arse’ to yourself when composing an image. It’s tempting to set up in the most obvious position, set the tripod to the most comfortable level and to not move from there, only adjusting composition based on zooming in or panning right or left. However, I think by using a wide angle lens and getting low to the landscape you can create leading lines and S-curves by making very subtle movements left to right, up or down. Movements of inches can dramatically improve a composition, even if it means standing somewhere awkward or breaking your back trying to operate your camera!