A Ring of Bright Waters: a Mourne hydrotrek 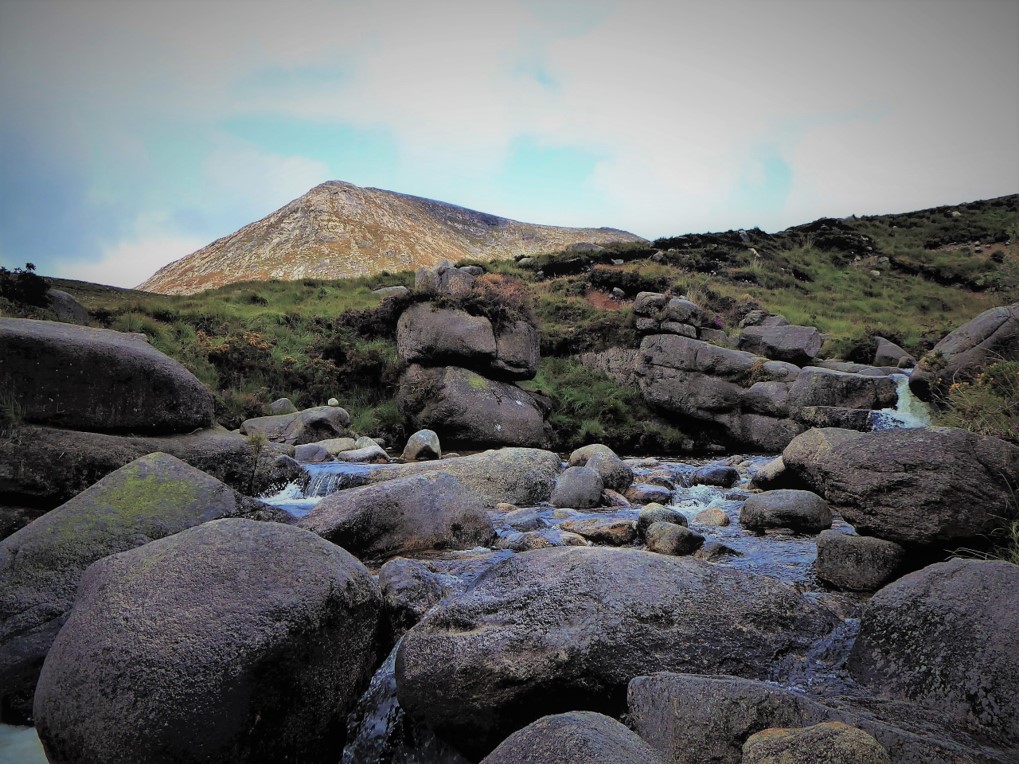 Most people in the northern counties of Ireland will have caught sight of the Mourne Mountains, even if only at a distance, and marvelled at their stark grandeur. Walking in the Mournes adds several new dimensions to the experience. To me, one of the most pleasing aspects of a Mourne walk is the variety of landscapes on show and one of my favourite elements in the scenic mosaic is the presence of water in the form of rivers, loughs and ponds. With this in mind, I attempted to map out a circular walk that would come close to as many watery sights as possible within a reasonable walking range.

The walk began appropriately at the Water Service entrance on Head Road just outside Annalong, easily spotted by its large red gates. There is enough parking space for eight or nine cars, but in my experience it is rarely as busy as the Carrick Little car park about a mile further on, which can often be full, especially at weekends. The Water Service road runs for 2.8km through Annalong Forest skirting the Annalong River.

READ: Paving the way in the Mournes with Katie Taylor (Part 1 of 2)

Halfway up the road, just past a disused building on the right, a short path to the left led down to the river, where I enjoyed delightfully mellow, autumnal Mourne views upstream and down.

On reaching the end of the road, I turned left over the Water Service bridge to take a quick look at the information boards charting the construction of the Binnian Tunnel, which feeds water under Slieve Binnian to Silent Valley reservoir. Between 1947 and 1952 a workforce of 150 men, in two tunnelling teams, worked 12 hour shifts for around half a crown an hour (12.5p in today’s money). Starting from opposite ends, they drilled and blasted their way through the mountain and met in the middle nearly 800m under the mountain top. Many of these Mourne stalwarts went on to work in the construction of the Ben Crom dam, which opened in 1957.

Mourne history lesson completed, I made for the Annalong River and headed up its eastern side on the faint path which begins just left of an iron field gate, Rocky Mountain and Hare’s Castle on the right and Lamagan on the left.

After about 500m, I crossed a stile and followed the course of the river for 400m before selecting a suitable crossing place with stepping stones that looked steady and not too slippy.

I then picked out a route with Lower Cove Mountain as a waymark. The terrain soon became quite rocky and undulating as I moved across the two tracks that lead off the Carrick Little path and up the valley. It was here that I made an unusual, and slightly disturbing find in the shape of what looked like an unexploded shell. I noted the exact Grid Reference and took a couple of photographs for further action later.

Gaining access required an ambitious stretch but I just about managed it. However, intrepid though I like to think I am, I decided that going deeper into the cave on my own was not a judicious course of action. It was equally tricky and stretchy, and a little scary, getting out of the cave again.

Finding the faint track leading to the col between Cove and Lamagan was not straightforward. I had to walk in the direction of Binnian for several metres before I could detect the track shown on the map, but once found the direction was obvious and after a few minutes I spotted the first lough of the day, Cove Lough. It lies below the cliffs of Cove Mountain surrounded by wetland and peat overhangs, with Slieve Donard positioned imperiously to the rear.

The track up Slieve Lamagan from the col was reasonably well defined and I soon reached the airy summit which offered fabulous Mourne views all round.

In the distance, the clear weather permitted a view of Lough Island Reavy at Kilcoo…

…while to the west it was just possible to make out a sandy shore of Lough Shannagh. Further on, Ben Crom dam made a tantalising appearance.

Descending Lamagan was interesting. Don’t be fooled by route descriptions that talk blithely of the “path” up Lamagan. I’ve scrambled up Lamagan from Binnian before and any resemblance to a path is purely coincidental. The closest you get is an intersecting network of sheep tracks zigzagging laboriously upwards. However, the descent was manageable and the Mourne views were magnificent, with the sparkling Binnian Lough the highlight.

It was time to take in one of the classic views of the Mournes, so I crossed the col between Lamagan and Binnian and began the trek up the third highest mountain in Northern Ireland. Time constraints and, frankly, fatigue prevented me from going any further than the rock platform that offers a superb vantage point to view Ben Crom.

My next venue, Blue Lough, was clearly visible. Its superb setting underneath Slieve Lamagan makes it one of the most photogenic of Mourne loughs.

The next part of the trek was all downhill and soon I was enjoying a restful picnic beside Blue Lough. In the early 1900s the lough was a popular spot for skating, its position in Lamagan’s shadow allowing it to stay frozen thicker and longer.

From Blue Lough I travelled south-east for about 300m until I reached the crest of a rocky slope on my right. Peering over, I could see that I was only a few metres away from Percy Bysshe cave (GR J330249).

Presumably, it is named after the English poet Percy Bysshe Shelley, who is believed to have visited the area in 1812 (There weren’t many other Percy Bysshes about). Being of a pedantic disposition, I attempted to discover whether Shelley had visited the area and if so, why a cave would have been named after him.  After extensive research I could find nothing to suggest he had ever been in the Mournes. He did visit Ireland for about six weeks in 1812, spending his time in Dublin, but it was not a pleasure trip. He was a passionate advocate of Catholic Emancipation and during his stay he presented two pamphlets making the case for Irish independence. Sadly, his idealism soon turned to disillusion when his radical proposals failed to ignite as much enthusiasm as he had expected.

It is possible that Shelley’s frequent figurative use of caves and caverns in his poetry could have prompted the naming of the cave, but I suspect it will remain a mystery.

I squeezed into the cave and had a quick peep, secretly hoping to find some poetic graffiti signed “PB Shelley, March 1812”.

After a cursory look round, with personal safety in mind, I extricated myself. There are three chambers in the cave, a full exploration requiring a lot of tight squeezes, manoeuvring and, not least, fearlessness. If you would like information on exploring Cove and Percy Bysshe caves, check out this awesome video https://vimeo.com/39591252  featuring the formidable, Everest-conquering Newryman Terence “Banjo” Bannon.

Out of the cave, I clambered down the slope to join the obvious track, turned left, then left again in the direction of Lower Cove before turning right and traversing rough ground to reach the Annalong River. Following the path that runs along the western bank of the river, I soon reached the Water Service weir and bridge, crossed the river and took the road back to the car.

This was quite an energy-sapping trek, but one that offered great variety and interest.

The following morning, I found myself in a Land Rover with members of PSNI Search and Rescue. Another vehicle carrying military personnel accompanied us up the Carrick Little track. After an entertaining, bone-shaking drive, we stopped near where I thought I had seen the shell. Luckily, I had entered the Grid Reference into my trusty Garmin eTrex, which took us straight to the scene, sparing me any embarrassment. After confirming that the interloper was a US Navy shell, vintage 1945, it was despatched with quite a loud bang (the US Navy used Slieve Lamagan as target practice during World War 2). I was proud to have played a small part in making Mourne a safer place.

By car via A24 and A2, turning right about a mile on the Newcastle side of Annalong up Quarter Road and onto Head Rd to the Water Service entrance gates. A bus service operates between Newcastle and Kilkeel. If using the bus service, you’ll need to add 4km to the trip to allow for the walk to Head Road and back. Check out http://www.translink.co.uk

Well, for a start you’ll need to be keen on watery environments and prepared for a bit of stepping stone action (if river conditions are likely to make crossing impossible, it’s probably better to begin at Carrick Little). It’s also a weather dependent trek if it’s to be enjoyed fully, so keep an eye on the forecast. Map, compass, wet weather gear and a stout pair of boots are essential. It’s a strenuous trek so a good level of fitness is desirable. If time and energy permit, the trek can continue over Binnian, where views of Silent Valley will add to the watery tally.