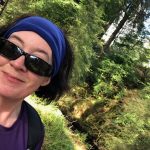 The River Roe flows 34 miles from the Sperrin mountains to Lough Foyle with runs of sea trout and salmon . Several miles of the river flow through a forested area near Limavady known as the Roe Valley Country Park. It’s a local gem of a place to walk to enjoy nature and explore the historical remnants of the past, and it’s one of my favourite local walks.

There are four car parks that access the park. The most popular is at the centre of the park accessed from the Ballyquin road between Limavady and Dungiven. Here you will find a visitor centre with a small but informative exhibition centre, toilets and the Ritter Tea rooms. 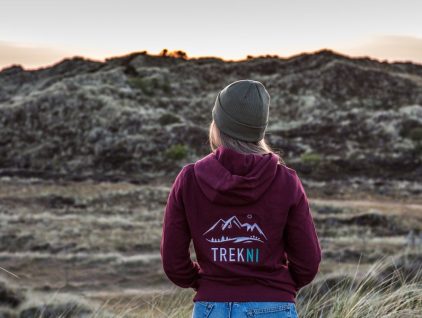 I chose to start my walk however at the car park accessed from Roemill Road in Limavady. From the wooded car park I took the path heading to the right and headed downhill to the river and crossed my first bridge of the day to the western side.

Most of the walk today would be alongside this dynamic stretch of water full of rapids and weirs. I would recommend visiting this on a day after there has been a lot of rain as the flow of the water is fast and there are also several waterfalls that can be viewed in full flow.

Once I had crossed the bridge I turned left and passed an information board. There are several of these dotted throughout the park showing route maps and information about the local habitat.

I followed the path now upstream and it wound alongside the river bank passing a few waterfalls on my right and weirs on my left.

The parkland is mixed woodland with many deciduous trees and the views along the river are very scenic. The path was quite muddy and rocky in places but quite low level at this point. After a time the path met another footbridge. I didn’t cross this one but headed on, now climbing a set of steps heading up through the woodland. At the top of the steps the path continued on to my left and a short time later emerged out of the forest to cross the road into the main Visitor Centre car park.

This complex is worth spending a little time exploring. There is an interesting exhibition room with information about the wildlife in the park (there are about 60 bird species as well as foxes, badgers and otters). Across from the car park is a small museum (Green Lane) and there is a biodiversity area with an accessible loop for wheelchair users. Watch out for the sculpture of a dog leaping – more about him later.

Heading back into the woodland again, the path continued on, meeting another footbridge at Carrick Mill. I didn’t cross here but continued past this until I reached a fork turning off to the right heading into denser woodland and then emerging out alongside fields.

This path led to the another small car park at Carrick Avenue and led me now to the edge of the country park. I headed left and followed several flights of steps down to an unusual inverted bowstring footbridge where I eventually crossed the river.

At this point the country park boundary ends. Across the bridge, there was another set of steps up to the quiet and scenic Carrick Rocks church.

At this point, I headed towards the boundary wall to a gap and a steep set of steps heading downwards and then onto a very rocky and muddy path. This part of the route is not part of the country park and is steep, slippy and goes very close at times to what is at this point, a very fast flowing river. It’s a very short section but it is the one area in this walk where care needs to be taken. Stout footwear required – do not do this section in trainers on a wet day! I got to the bottom of the bank under some fascinating rock overhangs and reached the river bank again at Carrick flats.

This is a favourite location of anglers and it’s common to spot herons who sit at the weir at this point looking for dinner!

I headed on around the corner of the river (muddy and wet here) past the weir and back into country park territory and then onto a gravel path heading down to Carrick Mill (small car park here also). Again this is a remnant from the important linen industry that was so important to the area in the past.

The path skirted past the mill and headed on downstream back towards the Visitor centre. When the path met the access road, I turned left and a short time later headed right back into the wood past a red brick building.

From this point there were several options back to the car park , a low path following the river or a high path that stays within the woodland. I opted to stay riverside but not before passing the site of O’Cahan’s Castle and the famous O’Cahan’s rock.

Limavady derives it’s name from the Irish “Léim an Mhadaidh” meaning Leap of the Dog. The O’Cahan clan ruled the lands around here in the 17th century. On one occasion the clan was under siege from the O’Donnell clan and the story goes that the O’Cahans sent for reinforcements by sending a wolfhound who leapt across the river. You can deviate off the path onto O’Cahan’s rock to see the site of the dog leap – take care – it’s a sheer drop. I salute any dog that could leap across that gorge! 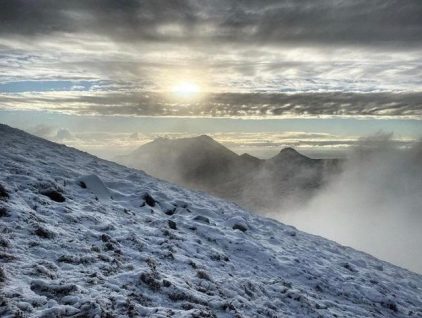 Heading back down to the river it was an easy stretch back to the car park after a lovely and peaceful riverside walk.

This route is just under 6 miles but the park is ideal for smaller loops bearing in mind that there are 5 bridges across the river and 4 car parks to access the park. In general it’s a fairly gentle walk with some undulating sections and easy underfoot with the exception of the “path” just past Carrick Rocks church. The park can be very popular at weekends but go early on a bright winter morning and you could have it nearly to yourself. Happy walking!

I live in the north west with my husband, two teenage children and a very lazy cat. I work as an Accountant in the health service but love nothing better than getting away from spreadsheets either to get out in the fresh air and walk or to sing with my local choir. I love walking around the Causeway Coast and County Donegal and am never happier than when I can hear the sea.