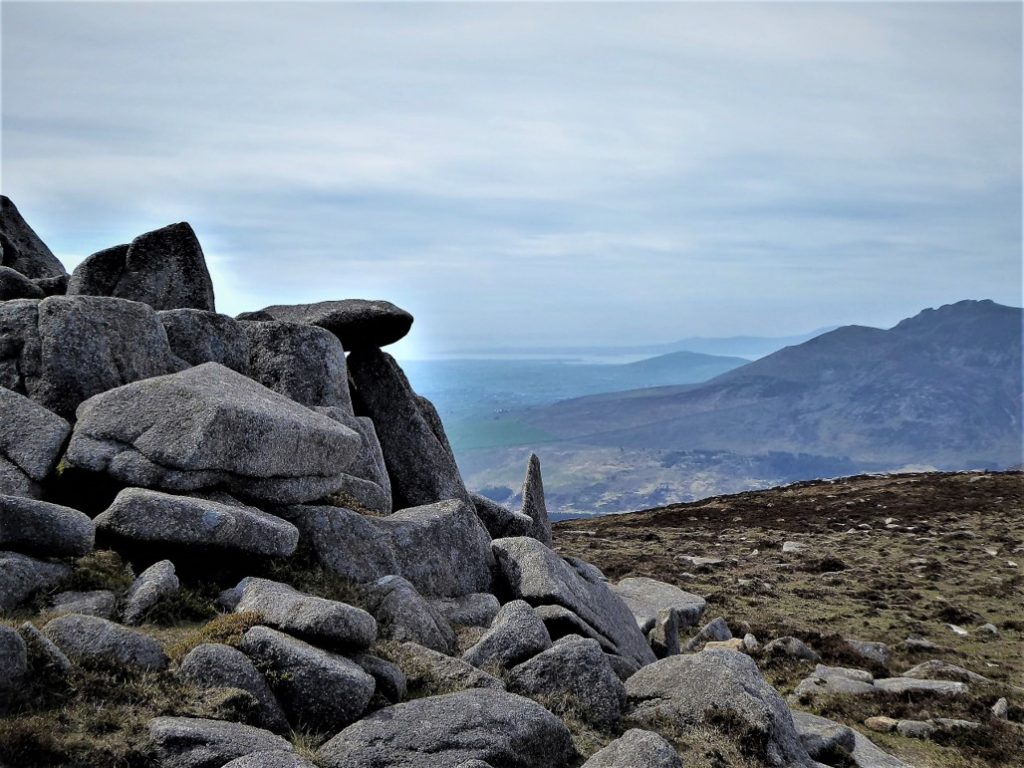 Despite its number 9 listing in the Top 10 Mourne Mountains by height, Chimney Rock seems to lack the glamour of its lofty siblings. It makes only a rare appearance in publicity promoting the Mournes as a walking destination, and is seldom featured by any of the many walking groups who populate the area every weekend. Being an enthusiastic supporter of the underdog, I resolved to grace the underrated peak with my presence for the first time.

I parked at the well resourced car park at Bloody Bridge and headed for the track that skirts the Bloody Bridge River. A small gate followed by a squeeze stile introduced the path, which made gradual uphill progress with the river on the left.

READ: Meditation in the Mournes

The warm sunshine had brought out the early butterflies, with wildflowers adding colour and interest to the rocky path.

About 80m up the path, a granite signpost pointed the way to the Mourne Wall giving the distance as 3.2km. A few metres further, I crossed a footbridge which spanned the inflowing Glen Fofanny River. Nearby, two pipelines carrying water from the Silent Valley intersected the river en route to the thirsty citizens of Belfast.

I crossed a step stile and continued up the increasingly rocky path, guided by another granite sign. A third sign appeared about 60m further, promptly followed by another directing me across the river.

I assumed that the profusion of signs was designed to help (some might say, pamper) those heading for Donard, many of whom would be first-timers.

The map confirmed that I was now on the quarry track. It was broad and fairly flat underfoot and after a couple of twists and turns, began to run parallel to the left bank of the Bloody Bridge River.

On my right Millstone Mountain, Crossone and Donard displayed their imposing stature, while looking left, I could make out Carr’s Face quarry on the north face of Chimney Rock.

I had a quick walk up what remained of the old rail track that was used to ferry the cut granite down to the main path.

I considered trying to reach the summit via Carr’s Face but the daunting steepness of the rock face put me off – at least for the time being. Returning to the main track, I soon reached the abandoned Crannoge quarry and, after a look at the mouldering artefacts, veered right, crossing the Bloody Bridge River and joined a faint track to the left which would take me to the Mourne Wall.

The trail was peppered with rocks and proved quite difficult to follow, but after a bit of a slog the welcome sight of the wall signalled the completion of the first section of the trek. It had taken me about 2 hours to cover the 4.5km.

There was a slight haze, but the weather was good enough for superb views of Binnian, Lamagan, Cove, Beg, Bearnagh, Commedagh, with neighbouring Donard at its imperious best.

After turning left along the wall for about 350 metres until it reached a slight incline, I spotted what looked like a likely path to the summit over some flat, low-lying boulders.

The path became quite indistinct, but I could make out a track below what seemed to be the summit, so I kept this as a target and made fairly easy progress through a series of intersecting sheep tracks. As I gained height the view back towards the wall was magnificent with at least a dozen peaks wholly or partially visible.

Nearing what I thought was the summit, spectacular granite tors began to appear.

Close up, I noticed that several of the tors had circular potholes full of water (apparently these have the reputation of holding water even in the driest seasons).

Leaving the tors, known locally as the Horsemen, I could see that the summit cairn was some way in the distance, but the going was easy and the path well enough trampled. The 656m summit (Grid Ref 364257) was reached about 3 hours and 7.5km from the start.

The views were dazzling with a clockwise 360˚ panorama premiered by Spence’s Mountain, sweeping round through distant Slieve Foye in the Cooley range, followed by Slieves Binnian, Muck, Lamagan, Meelbeg, Bearnagh, Cove, Slievenaglogh, Corragh, Commedagh and Donard, with Dundrum Bay and the golden sands of Murlough completing a satisfying canvas.

After a reflective look at the memorial plaque and fragment of wreckage commemorating the five American airmen who died in a B26 Marauder crash on the mountain in 1944, I considered the options for returning to my starting point.

Apart from retracing my steps (always a last resort), the only feasible option for a reasonably timely and comfortable return to Bloody Bridge involved a trek down the eastern slopes of Chimney Rock followed by a walk along the Mourne Coastal Path. I had done some pre-planning and had found a route description that covered this route. However, I wanted to investigate other possibilities. Taking a short walk south of the summit to check out the lie of the land, I considered walking down to Rocky Mountain and making for Rourke’s Park via Long Seefin and Round Seefin, but this route would have involved a much longer trek than I had envisaged.

So to the east I went. I could have subtitled this article “when treks go wrong”, and if you’re reading this purely for route directions, please avert your eyes.

As advised in the rather vague route instructions, I clambered down the eastern slopes of the mountain exercising care in the thick, heathery undergrowth with its concealed holes and frequent rocky interruptions.

Keeping to the northern side of the Crock Horn Stream, I reached an area close to the foot of the stream after an hour’s tedious progress. To cut a long, tiresome story short, a gate to which I was directed was padlocked and covered with barbed wire. After struggling over the gate, I found that the path to the main road was choked with impenetrable gorse and led to a field which contained two very skittish ponies. I ended up emerging onto the road through the back garden of a private residence. Thankfully, the rather surprised owner was very understanding.

Driving along the Glassdrumman Road later, I could not see any obvious outlet onto the road, except a locked metal gate which bore a notice stating that it was private and no access was permitted. The field with the ponies was also heavily gated. Either the route description was well out of date, the main pitfall of a reliance on printed route cards, or I had seriously misread the instructions, one of the many perils of old age.

For the final section of the walk, I made my way for about 60m along the busy road towards Annalong and turned left down a track which led to the Mourne Coastal Path. A very pleasant 2km walk along the Path took me to Bloody Bridge. The Path runs from Bloody Bridge to Annalong and is a very attractive walk in its own right, but before setting out, it’s important to check the tide times to avoid the couple of hours before and after high tide.

Back at Bloody Bridge, I was already planning an assault on Chimney Rock past Carr’s Face and, perhaps, a return via the Glen River to Newcastle.

I parked at the Bloody Bridge car park which is about 2 miles out of Newcastle towards Kilkeel. There is a fairly regular bus service from Newcastle to Kilkeel with a stop at Bloody Bridge.

6 hours (but could be completed in 5 hours)

… you enjoy something a little less travelled, but with the same great mountain views and the bonus of a look at some features of the Mournes’ industrial past. Unfortunately, I can’t recommend the descent route I followed. However, there are alternatives – the route via Rocky Mountain to Rourke’s Park or a return to the stile on the Wall and on to various alternative destinations via the Brandy Pad are workable options. Both would be easier if two cars were involved, so more of a challenge for the lone trekker.

This is a moderately strenuous trek but average fitness levels should suffice. As with all Mourne walks, map, compass, sensible clothing and footwear are essential. Several reminders of the quarrying industry are visible on the slopes leading to Carr’s Face. On a more sombre note, some remnants of the crashed B26 aircraft can be seen on the southern slopes of the mountain.