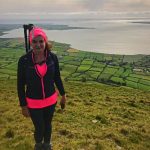 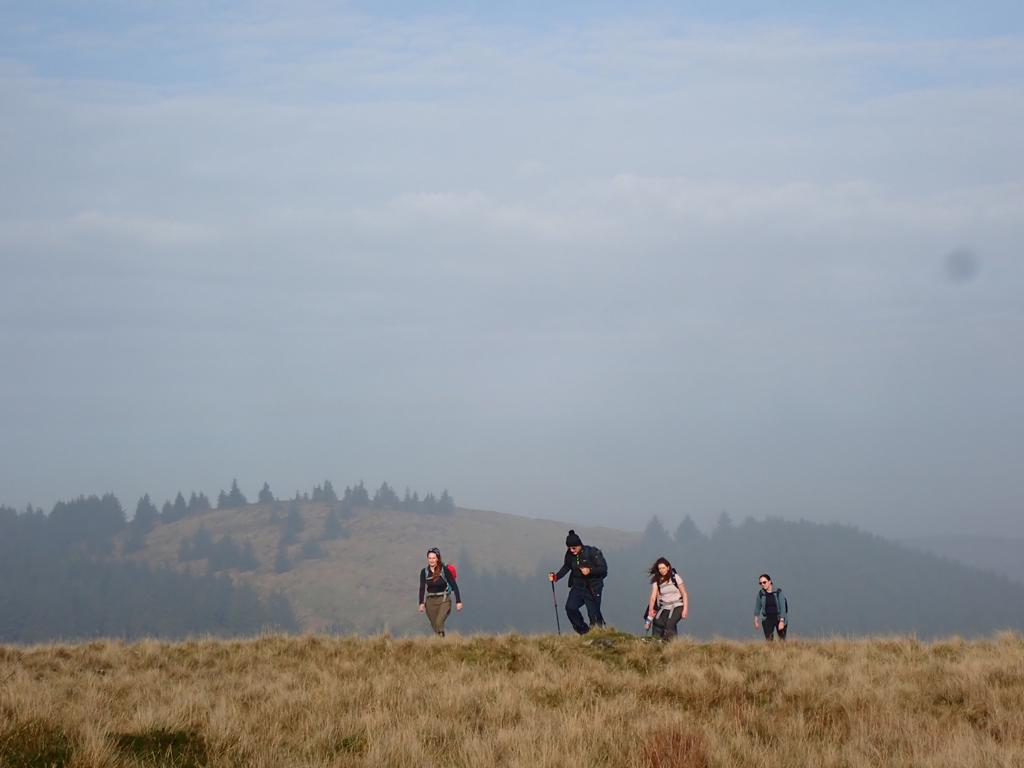 I love Trek NI days and today was the hike I looked forward to the most as it was on home territory, the Rostrevor mountains.  These mountains are my favourite as they hold special childhood memories, of times we headed off for the day with jam sandwiches in our pockets and drank water from the running streams. So that day I bounced out of bed, raring to go!

The weather was bright and sunny and pleasant. We met at the top of Kilfeaghan Road beside Dan White’s cottage and the Watergap River. Plenty of chat, buzz and energy and an exchange of stories about sleep, breakfast and new gear followed, with one of the men saying they wore suspenders underneath as a base layer. Maybe that’s one of the reasons he became overheated later. 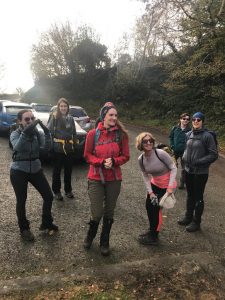 It was great to meet with locals too as they tended their sheep. There was a bit of reorganising to get the vehicles parked in a tiny car park but Mal sorted that with the locals and everyone got parked safely (bumper to bumper) and we headed off with our leaders Darren and Vanessa around 11am. 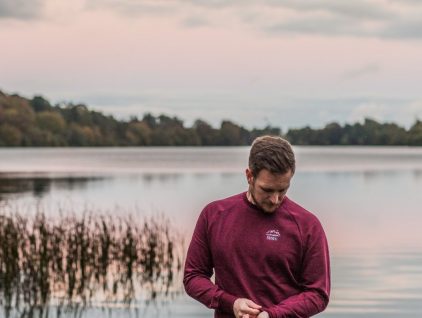 We crossed the wee river and headed up a stoney lane, only to be stopped as soon as we were started by a farmer raising his hand as he chased his flock of sheep onto a trailer along our track. After a short delay, we got going again. At the top of the lane we went through a gate which took us into an area known as Curragh Knockadoo.

From there, we continued out across Slieveanowen – a wet, boggy, marshy terrain towards Cassy Water River. This was challenging, akin to being thrown in the deep end, and the boots and gaiters were well and truly broken in. A few screams and shouts as the feet sank deeper than expected, with reports of wet feet and legs already!

It was great to see teamwork as the men emptied their rucksacks to help a fellow hiker who got soaked after falling into the river and before long they had him in a new outfit. We had a short break to refuel then and it wouldn’t be the same without a Jakeman’s sweet from Ryan as we got up to continue the journey ahead. 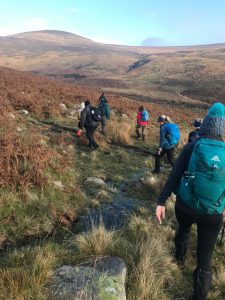 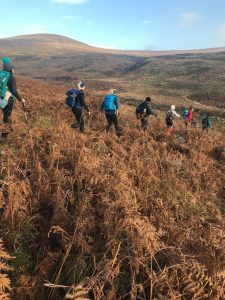 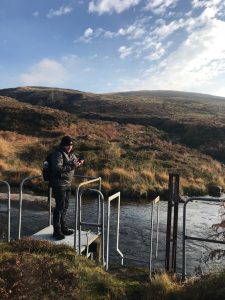 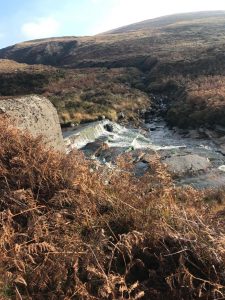 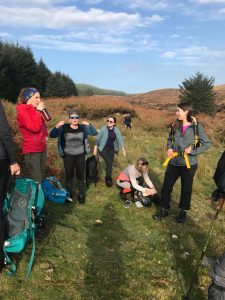 We followed the river until it took us to the corner of a stone ditch which we climbed over and into Slievemiskan.

Slievemiskan is a wooded area with forest tracks and narrow paths, a secluded place with dense areas of trees and a floor covered with a mat of thick moss. There were beautiful autumnal colours and narrow streams and water falls – this was so tranquil. As Christine said, it’s therapeutic to walk among the trees as they are known to reduce stress and have a calming effect and boost overall well-being. I loved this area – it was like being in a different world, getting away from it all! 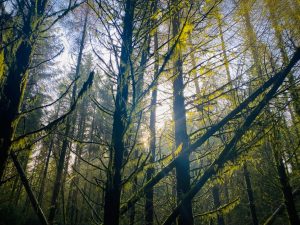 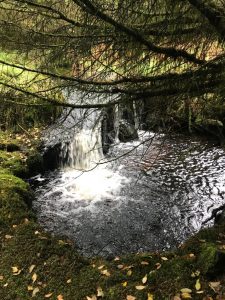 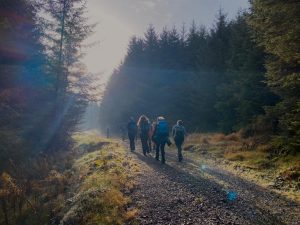 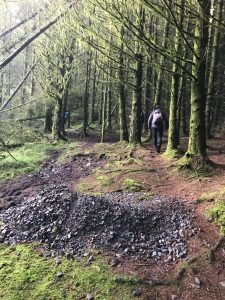 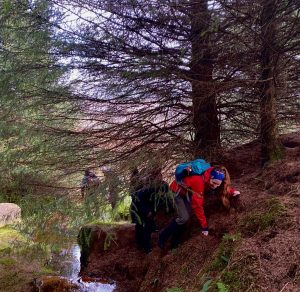 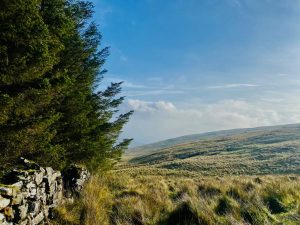 We meandered our way along the forest tracks which led us to a stone ditch and to the foothills of Slieve Martin. We then headed uphill to the Slieve Martin summit (485 m). We saw our other Trek NI group in this distance and shouted, jumped, waved and made loads of noise, but oops maybe it wasn’t them as no response echoed! We joked that there would be news of a strange acting group on Slieve Martin that day, and to avoid the area.

Sidenote from the other Trek NI group: we heard them. 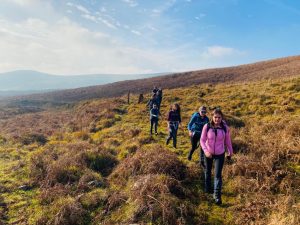 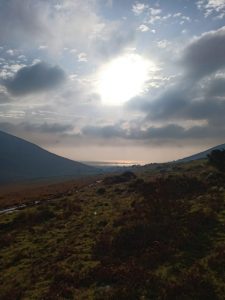 We stopped for a welcome cuppa and lunch, and Darren impressed us with his jet boil and the bubbling pot noodle (at least he remembered to bring the pot noodle this time!). It was a chance to take photos too of the spectacular views. There was the usual banter and stories, and jokes of slightly wet backsides as we got up and got going again, and whether it was an outside or an inside job. 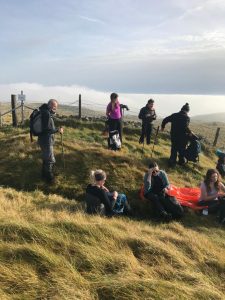 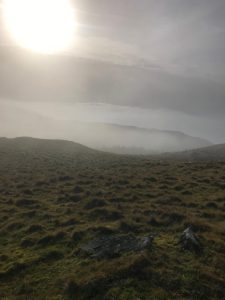 From Slieve Martin we followed the forest track downhill towards the Cloughmore Stone. We laughed at two trekkers Robyn and Ryan as they climbed on the big stone (well, one much easier than the other!). Must have been the rock climber in her! Getting down off it was even more entertaining, but fair play to them for giving it a go. We got together for a group photo and laughed as Darren scrambled to get into the photo after setting the timer on his phone. 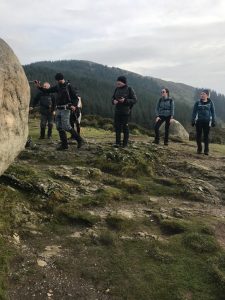 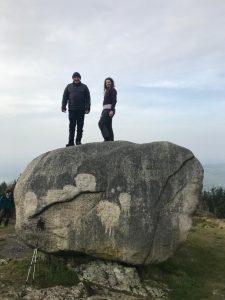 We left Cloughmore and headed down narrow forest tracks which took us to a clear grassy area called the Fiddlers Green. We exchanged stories of how people of all ages gather there for song, dance, stories and a picnic at the start and end of our festival in July. Hopefully that will all resume next year. 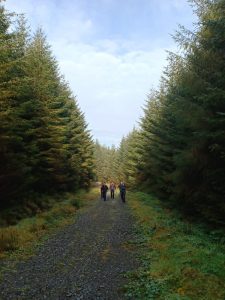 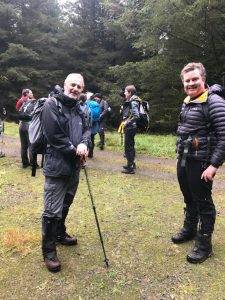 We took a short refreshment break at the end of the path, at ‘The Fiddlers Green’ sign before heading left to another track along a wooded area. This was a nice walk and was pleasantly flat and dry and a chance to chat, of course. 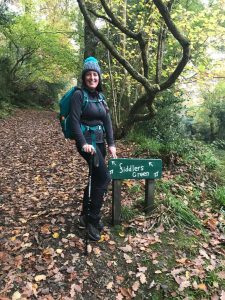 It felt like we were on the free wheel home BUT at the end we climbed over a stile only to look up at our next climb Slieveban (400m). I think this was a wee wake up surprise thrown in by Darren as it certainly was challenging.

We followed the stone ditch uphill, a steep incline. Our strength and fitness were well and truly tested as we battled upwards. We started to disperse a bit and chat quietened as we put all our energy into the climb, and just when we thought we were at the top a few times, we weren’t – the false summits. 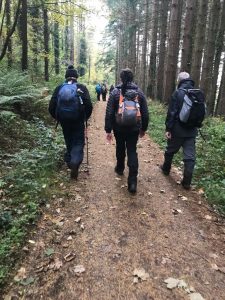 The top was marked by a stone wall and a wire fence and a chance to rest and refuel. Vanessa and Clare checked the map as they re-navigated, taking note of delays and the daylight left. Darren was at the back of the group, the usual source of team effort and support as we had someone not feeling well. Everyone raided their backpacks with offers of energy drinks, nuts and bars, and after a rest and something to eat/drink, she was up and away like a bullet.

We left there and continued towards the summit of Slievemeen (472m) and across Slievefada, marshy and boggy but flat. We then headed back down the mountain towards the Watergap River and the car park, our starting point. 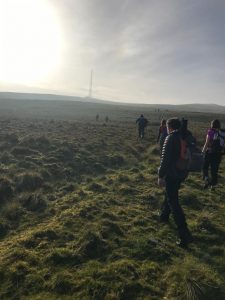 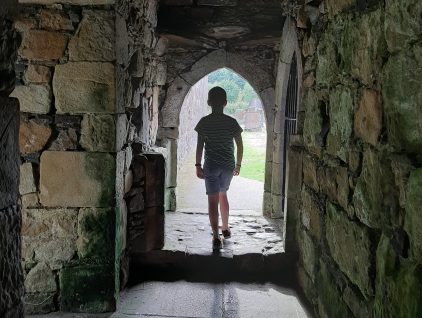 READ: Top 5 Castles, Ruins and Abbeys for Families to Visit in Northern Ireland.

Daylight was falling, which added to the adventure and challenge. Some of us had headlights or used our phone light to help make our way towards Darren who was at the end point with his torch to guide us in the right direction. The team really came together at this point to support and encourage and check on each other, and of course giggles too as we were in the marshy holes before we saw them. It was good navigation as we got back to the car park just before darkness really fell, a reminder to all that it would make sense to pack a head torch now for future hikes.

Everyone chatted a while before getting into the cars and heading off home. It was a great day and one of the best hikes I’ve been on and the craic continued well into the night on our group chat, as we relived the day with the exchange of photos, videos and plenty of laughs.

I have to take this opportunity to mention my unique experience of togetherness, connection, friendliness and support in this group. It’s a shared love and respect between strangers from all backgrounds and genuine smiles as members are delighted to meet. Endless stories, yarns, banter and craic. Energy sweets/food/drinks shared if you are having a sluggish day and at the back (never me!!), and an all round good atmosphere. A positivity and release and a life line, I think, in these strange times.

I work as a Bookkeeper and live with my daughter Molly aged 11. I have 2 older children Nichola and Darren who live in Liverpool.