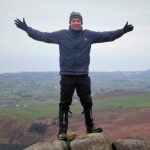 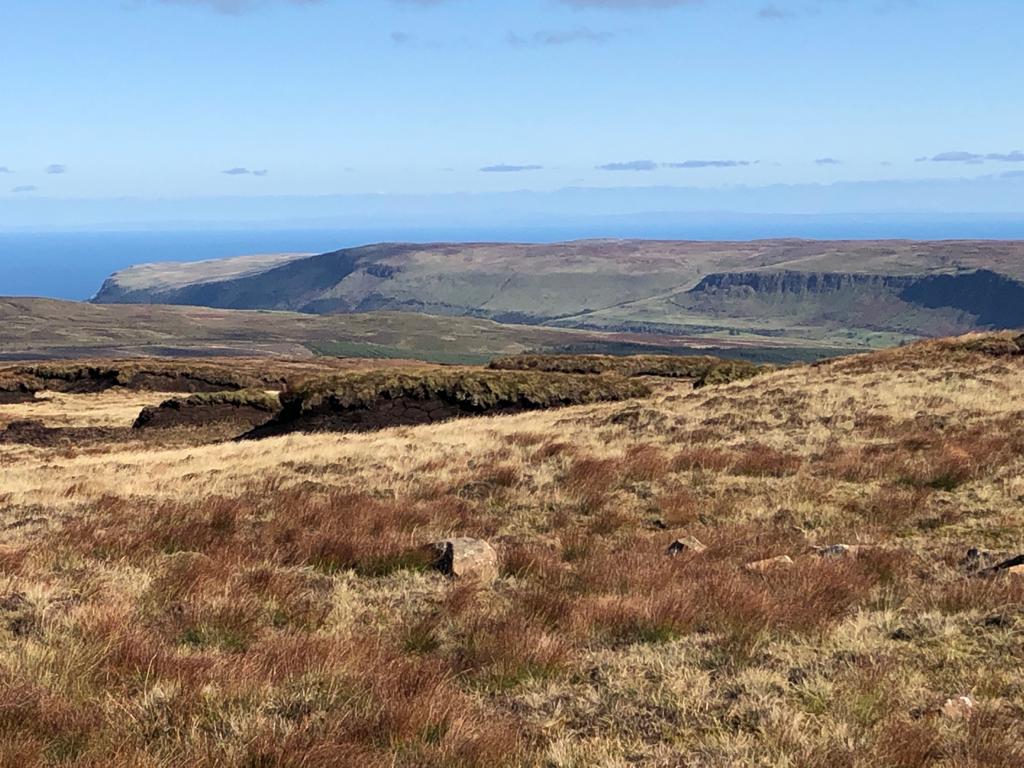 On Saturday 26th September the Trek NI group gathered (socially distanced of course) in the picturesque Glenariff Forest Park Visitors Centre car park. Situated on the east side of the forest, the car park offers up excellent views of hillside leading up to Crockravar and Craigatinnel, which overshadow the Glenariff River leading out to the Irish Sea. 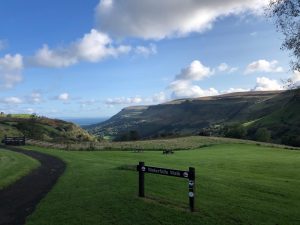 With the group split into two, I found myself in the smaller advanced party heading up towards County Antrim’s highest and second highest points, namely Trostan and Slievenanee. Rising to some 550 and 542 metres respectively, both peaks offer spectacular views of the south west coast of Scotland and the North East of Ulster. 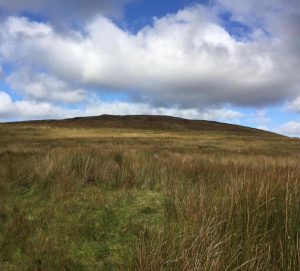 I was particularly looking forward to the challenge. The last time I tackled Trostan was almost 7 years ago to the day, back in 2013. Back then I arrived in a ‘Pea-Souper’ and could hardly see the length of my arm, let alone Scotland or the surrounding Antrim hills. Today would be different as we picked one of the clearest days of the year in beautiful sunshine. Not a day to forget the suntan lotion; of course I did! 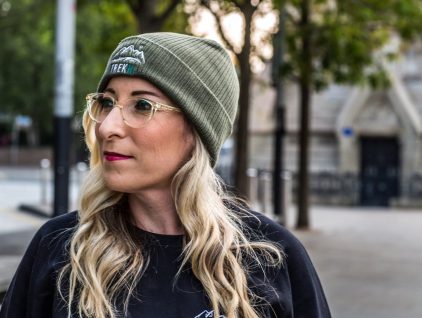 SHOP: Sweaters made from 100% recycled material.

We set off back down the Forest Park entrance, crossed the A43 to pick up the trail of the Moyle Way along the Castlegreen Burn. I was taking an outing as a ‘walking lead’ for the first time. Unfortunately for the group the last time I picked up a compass in anger was in my teens whilst in the scouts. Help was on hand however with Graham also in the lead group, with his more recent Mountain Skills qualifications to back us up.

Our first target was the cross point of the B14 to the north side of the forest, which would see us arrive at the South East slopes of Trostan. The path was easy to follow, through the forest clearings where a large number of trees had been recently felled as part of the on-going forest management. We stumbled across a large gathering of Christmas fir trees which boosted our spirits; despite everything that has happened this year there was hope that Christmas wouldn’t be cancelled just yet.

Having completed a number of walks in the Mourne mountains over the past few months, the group was really looking forward to another mountain challenge. This was despite the pre-walk warnings that Trostan at the best of times is tough going through endless metres of peat bog. And it didn’t disappoint!

Unlike a number of peaks the group have tackled this year, with sharp ascents and solid rocky paths, Trostan is one of those slow ascending summits that saps the energy from your limbs as you climb up and down through endless numbers of peat hags. 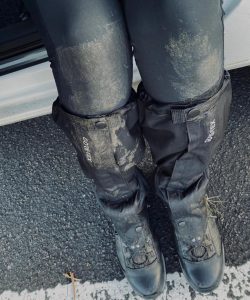 With that not being challenging enough, the ground around the peat hags is interspersed with ‘quick-moss’. It’s a bit like quick-sand but green and just as effective. Most of the party, at some point, trod in moss covered bogs up to their shins, with some being lucky enough to go past the knee. Thinking I had one-up on the group with my walking poles didn’t help but they did at least save me from a complete face plant and being crowned the latest 21st Century Lindow Man. The group soon realised that the best way to avoid the hazard was to walk everywhere that Miki didn’t; she seemed particularly adept and falling into most of the worst conditions.

Thinking that the quick-moss was the worst that Trostan was going to challenge us with we then found the leg-breaking hazard holes. These are cleverly disguised as mounds of grass but actually hide anything from two foot or more holes in the ground which, if not navigated carefully, could actually cause you some real harm.

Halfway up the mountain we found an abandoned office chair. Evidence that some folk really are taking this social distancing at work just a tad too far. 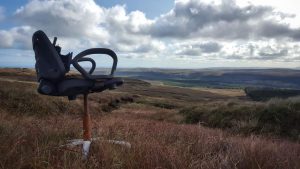 Despite all the natural hazards, the walk up the mountain on a clear blue-sky day is relatively straightforward from a navigation point of view. We followed the fence line up the south west of the mountain before heading north to find the waypoint at the summit.

The painful climb was well worth the effort. We were treated with striking views of the Scottish coast to the north and east, along with striking views of the windfarm that surrounds Slievenahanaghan to the west. On a clear day the view from the peak of the Antrim hills his hard to beat. The actual peak itself is somewhat strange terrain, looking not too dissimilar to a lunar-landscape. 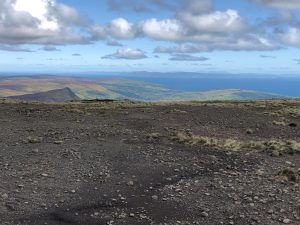 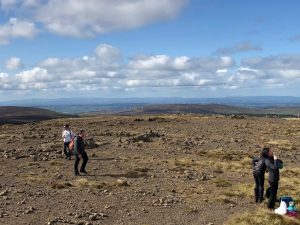 We stopped for lunch and a cuppa before heading back down the south-west side of the mountain, our next stop being Wee Slievenanee before moving on to Antrim’s second highest point and adjoining peak of Slievenanee.

Thinking we’d faced the the worst of the wet boggy conditions heading up the mountain we soon realised that the next 5 KM were going to be just as challenging, if not more so, as we encountered even more quick-moss, hidden hazard-holes and the muddy slopes surrounding the various peat hags.

Wee Slievenanee was reached with great relief. With Conor, or “Skippy” has he was newly christened (given his great ability to jump kangaroo style over the bog), being the only one with the motivation to clear the fence and stand on its 455m peak. 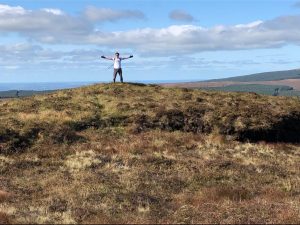 From there, the group navigated due south to Slievenanee stopping for another refreshment break before climbing the final ascent up the 542 metres of Antrim’s second hill-top. With the sun beating down upon us we were really able to enjoy the best of the Antrim Hills vistas, looking back down towards Crockravar from a distance. 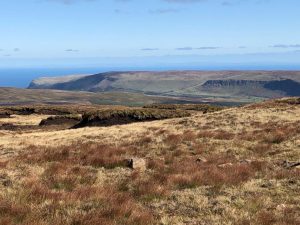 The descent wasn’t without its own challenges. The south-east slopes of Slievenanee are interspersed with a series of hidden gullies that form additional trip hazards. In a pea-souper these could easily trip you up if you’re not careful on your feet. We did a good job I finding most of them despite it being a clear day. Fortunately our group remained in good spirits with plenty of craic laughing at each other’s misfortune. Most important of all, everyone descended with all limbs intact. 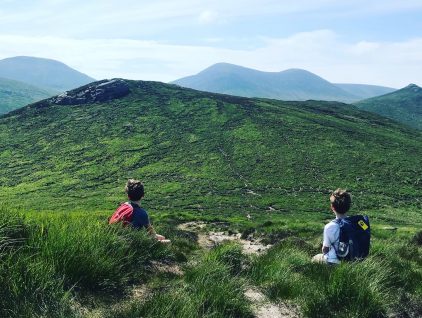 READ: Our three most memorable hikes in the Mournes.

With the end in sight, and our limbs somewhat aching after the 15 KM completed, the group leaders decided to take a ‘long-cut’ back through Glenariff forest along a section of the Dungonnell Way. Making up half of the walk-leadership for the day I guess I have to take 50% of the blame for that one! In my defence I thought we’d only walked around 12 KM until I realised that my Garmin was – for some reason – tracking 3 KMs behind everyone else’s smart devices.

Fortunately Glenariff forest is a beautiful walk. The emerald colours of the forest floor and the fresh odours of the overhanging woodland make your senses come to life. I’m pretty sure it was the forest odours that Melanie was appreciating and not the aroma of the 3 nearby walkers when she confessed to loving the fragrances of the walk. 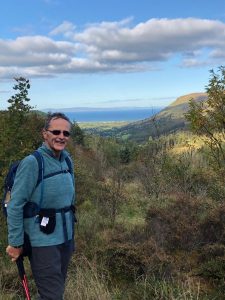 There was just time for a quick stop at a splendid viewpoint looking down into Waterfoot before heading back to the carpark. We completed the walk with a sense of achievement, clocking up some 19 KM (or 16.5 km according to my dodgy GPS) and having been able to experience the best of the Antrim hills in glorious sunshine. I took one final look in the mirror at the view before leaving, cursing myself at the red glow from my face making a mental note not to forget the suntan lotion next time.

Hi I’m Matt, I live near Whitehead. I work as an IT project manager and I love walking in the mountains. I love the sense of escapism and achievement. Walking with a group of fellow trekkers really enriches the experience, knowing you are with others who feel the same way. My favourite hike so far was Trostan, the county high point of Antrim. It was one of my earliest treks, we took a route up through the woods at the base and I remember the moss  was so green and bright, the colours were amazing and live long in the memory.