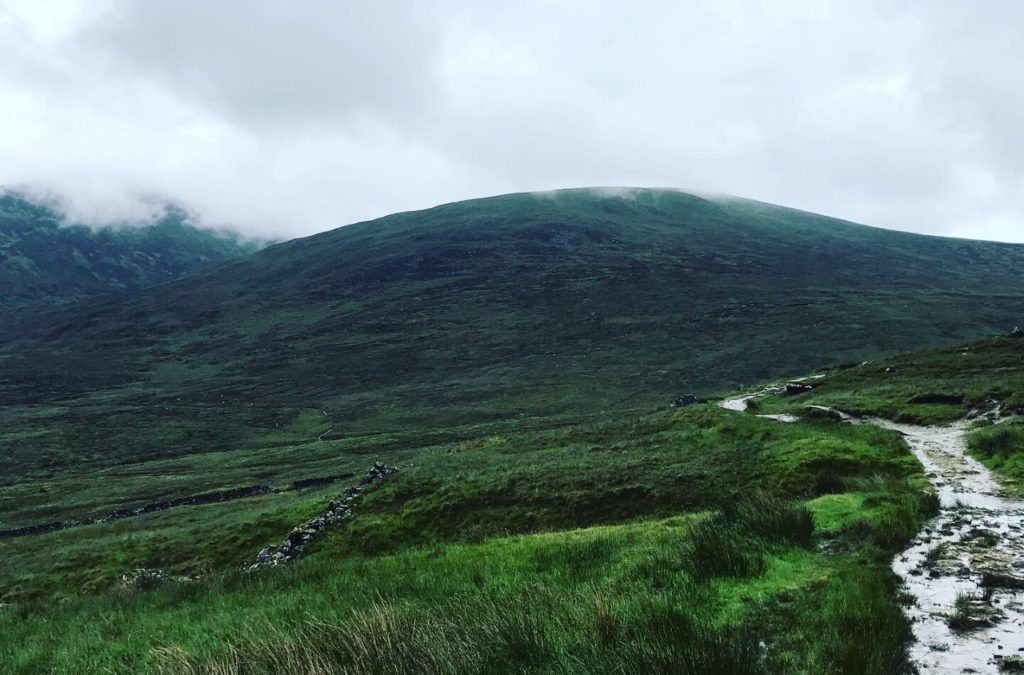 How else could we explain why six otherwise sane people would slog it out for three hours in unrelenting rain up Carn and Muck mountains on one of the worst days in June so far (well it seemed pretty bad to delicate little me).

READ: The Birds of Early Summer

And it’s not as if we could enjoy the views – there were none to be had thanks to the mist that kept constant company until it too had had enough and shimmied off into the wide blue beyond. Not without the last laugh however –  a teasing view over Fofanny Dam Reservoir on the last 10 minutes of the walk back to Ott car park, left us with the tantalising thought that if only we had started later in the day we could have enjoyed more of this stunning scenery.

Indeed, we met many travellers along the way sharing the weather god’s droll sense of humour – “It’s sunny further up” …. “Great views just around the corner” Hah! But at least they reassured us that we weren’t the only ones mad enough to be out in this weather.

And as for the rivulets of water spurting down the stony path for the first mile or so, well they hadn’t drained away by the time we were on our way back. The last crossing was about a foot deep and ensured that the wet socks we thought couldn’t get any wetter did just that!

“Anyone who says sunshine brings happiness has never danced in the rain.”

But you know what – I wouldn’t have missed it for all the flasks of hot tea in China. Yes, really! Hard to understand for those totally new to this walking lark, but sure to raise a smug “told you so” from seasoned hikers. Sure what’s a bit of rain between friends…or mist…or wind…or soggy wet clothing…

Which brings me neatly to some words of wisdom, now that I am ‘an experienced mountaineer’ myself (!). I can’t emphasise too highly the need for proper clothing. Yes, I know it’s basic advice / nothing new / well highlighted by the walking group leaders, but I thought my apparel was good enough, and found out the hard way that actually it wasn’t. Fine for occasional showery conditions but unable to deal with a prolonged deluge.

So, my ‘bargain’ outdoor walking gloves were soon absolutely saturated and therefore hard to get on and off each time we made a stop for a hot drink or a short rest. My outdoor jacket should have been able to cope with the conditions better but is about 25 years old and would have needed to have been re-waterproofed. I learned that you can buy products to do this but I might just invest in a new jacket. Also, although my trousers were advertised as showerproof they weren’t up to the heavier demands of incessant rain over three hours.

One thing that did pass the user test was my walking poles – I found them a Godsend for both ascent and descent and they’re not an expensive buy. And a folding sit mat would have been welcome when we stopped for sustenance, but a plastic bag is a fairly acceptable alternative – no point in getting your derriere wet when maybe it’s the only part of you that has remained relatively dry under your trousers and jacket.

Of course, with the weather we endured it would have been hard to remain completely dry anyway, but our guide Graham proved the point – he’s experienced enough to know what works and what doesn’t and his clothing and boots were probably the most waterproof of everyone’s in the group. If you’re going to go walking in the rain, it makes sense to invest in the best gear you can afford.

Sustenance for the Soul

But wet as we all were, our spirits were most definitely up in the clouds that surrounded us, and the sense of achievement, camaraderie and sheer exhilaration we enjoyed as a determined team who wouldn’t be beaten by the elements totally transcended any short-term physical discomfort.

As this is a new walking group I imagine there will be some potential members who are unsure what to expect. Well, the forays have been relatively modest so far, so no need to be afraid of not making the grade. Both our group leader David, and our guide Graham were excellent, patient and professional, and the group (although small on this occasion) was very welcoming.

If you are hovering on the side lines, not sure whether to take the first step (literally) and join a walking group, all of us would agree – just go for it. Sunshine or rain, it really doesn’t matter.

And in the words of that famous philosopher, Eeyore: “The nicest thing about the rain is that it always stops. Eventually.”

Graham: “Six of us braved the elements on a very wet Saturday morning. We set of from Ott car park up Ott track, probably more aptly named Ott river in the weather conditions. On reaching the Mourne Wall we crossed the stile and veered right, following the Wall over Carn towards Muck. We took a break for a welcome cuppa at the beginning of the ascent up Muck before heading on up to the summit. After a brief stop for lunch on a blustery mountaintop we all headed back down via Carn and Ott track again, reaching Ott Car Park a wet but happy bunch.”

Mia: “I enjoyed our walk last Saturday, in spite of the rain. I knew joining a Hill Walking Group is the way to go, otherwise, I would have stayed in bed or wait for a better weather. The mountains give a different wow factor with the rain. The mist, stream of water running down the path, mucky boots, makes one feel alive. Graham was such a good Guide. His knowledge with the help of his app kept us right. David and wife Christine were very encouraging. They watched from the back like good Shepherds. Grace and Diane were so inspiring. They just got on with it without moaning. We were soaked but we had fun! Looking forward to next one.”

slieve muck and the banns road